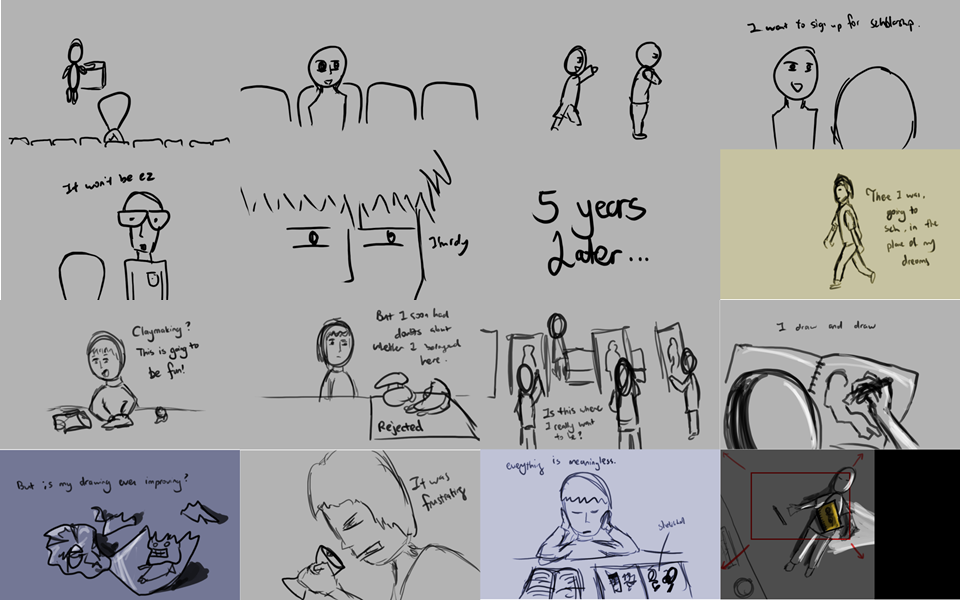 This is a short picture story about a kid with a dream. I made this and chose this story in hopes that it will be something that people can relate to, whether you are studying in the arts or not – as everyone has a dream that is greatly linked to one’s motivation.

The story follows the Hero’s Journey and 3 ACT structure:

Prior to learning about the Hero’s Journey, I had a rough story that I had drawn the storyboard for. But after taking a look at the 3 ACT structure and the Hero’s Journey which we had learned, I made changes based on it to improve the story, like adding in another layer of ‘problems’ that the main character (hero) would have to face and resolve, to raise the stakes and to give the story more depth than before.

I also saw how a story can be communicated more effectively through visual structure.

I used warm hues to represent the happier moments in the story -when the hero first enters his dream university (ADM) in ACT 1, when he sees his turtle at the end of ACT 2, and for his final resolution in ACT 3.

I used blue hues for moments when the character is feeling  depressed and at his lowest point (after he receives a phone call that he is going to lose his scholarship and school placement).

I also used tone, something which I had not explored previously. I increased the contrast gradually as the story’s intensity increased, and is most noticeable in the chiaroscuro lighting used in the drawing scenes.

I also wanted to use deep space to represent that the character was in deep thought, when he looks back at the school that he is about to be expelled from in ACT 2.

Finally, I used horizontal lines to imply tension -seen in lines in the curtain and the staircase. I think this is a detail I could have explored more and trained my eyes to notice when shooting pictures for my story.

Lastly, I also played with repetition, by repeating the same scene in a different act of the story (ACT 1 vs ACT 2), to show the contrast in the character’s mood (motivated vs demotivated) and exaggerate the difference between the scenes.

A storyboard that I had drawn, highlighting in colour tones I wanted for certain scenes.

As for research/inspiration, I remembered that in class, there were mentions of directors who turn to real life to get story inspiration as they are very close to the heart and are thus very authentic in the emotions they can evoke. Thus, this was how I decided to get my inspiration for the story I had created for my hero – A Hero’s Journey.

Additionally, here are some extra credits to thank the following people who appeared in the video and were not mentioned in the video’s credits (my apologies!):

Thank you for watching my picture story!