“My Line is Emo” is our very first assignment in 2D. Above are the 18 outcomes I had created to represent emotions. In order from top to bottom, they are:

My personal favourite emotion would have to be loneliness, which shows a big white dot trying to reach out to others (the cluster of little black dots on the extreme left of the strip), but is unable to do so.

And with the completion of this assignment, I am feeling the very last emotion with the highest degree!

Now time to finally get some rest!

In the past few weeks we had been learning how various tools could be used as mark making tools.

This exercise made me realise that even everyday objects were potential mark makers – several of the objects I used were things that I were about to throw, but I kept it them for experimenting. I was actually very surprised by the various results and the randomness of them during our experimentation.

Even a roller could produce various effects with just the ink, and it appears to be the most basic “mark making” tool compared to other objects with more complex shapes and textures.

I was able to produce gradients with the roller, but it was not something I could control easily.

Additionally, I was also glad to have the chance to use our penknife to cut this! 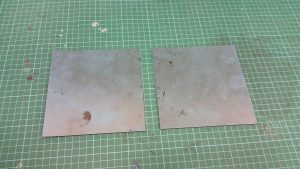 We would later use this as a mark making tool itself, by carving intricate patterns on it and painting its surface with ink to create something like this: 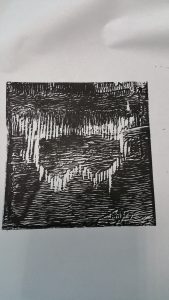 For those that don’t know what it is, it actually is a stormtrooper helmet design (abstracted with lines). It was inspired by my notebook:

Another thing we had learned was how to generate ideas for our assignment. One method was memory drawing. I was unsure of whether it would produce something I would want, but I was open to try it and see what it would produce!

I closed my eyes and with my eyes shut, held the pencil and thought of a memory relation to an emotion to produce a possible outcome. The result looked like a bunch of random lines which intersected to form shapes, but it was not as random as I expected and it produced some interesting features.

After the drawing, a few distinct shapes or features can be picked up and I intend to play with one of it for using in my final “emo line”. Memory drawing is a technique I had not done before and it was definitely eye-opening to give it a try in class.

I also wrote words next to these features of the drawing. They are mostly words which come to mind on the fly when I look at the drawing. They may remind me of other things or hopefully inspire me if I take a second look.

A list of tertiary emotions we have learned today: