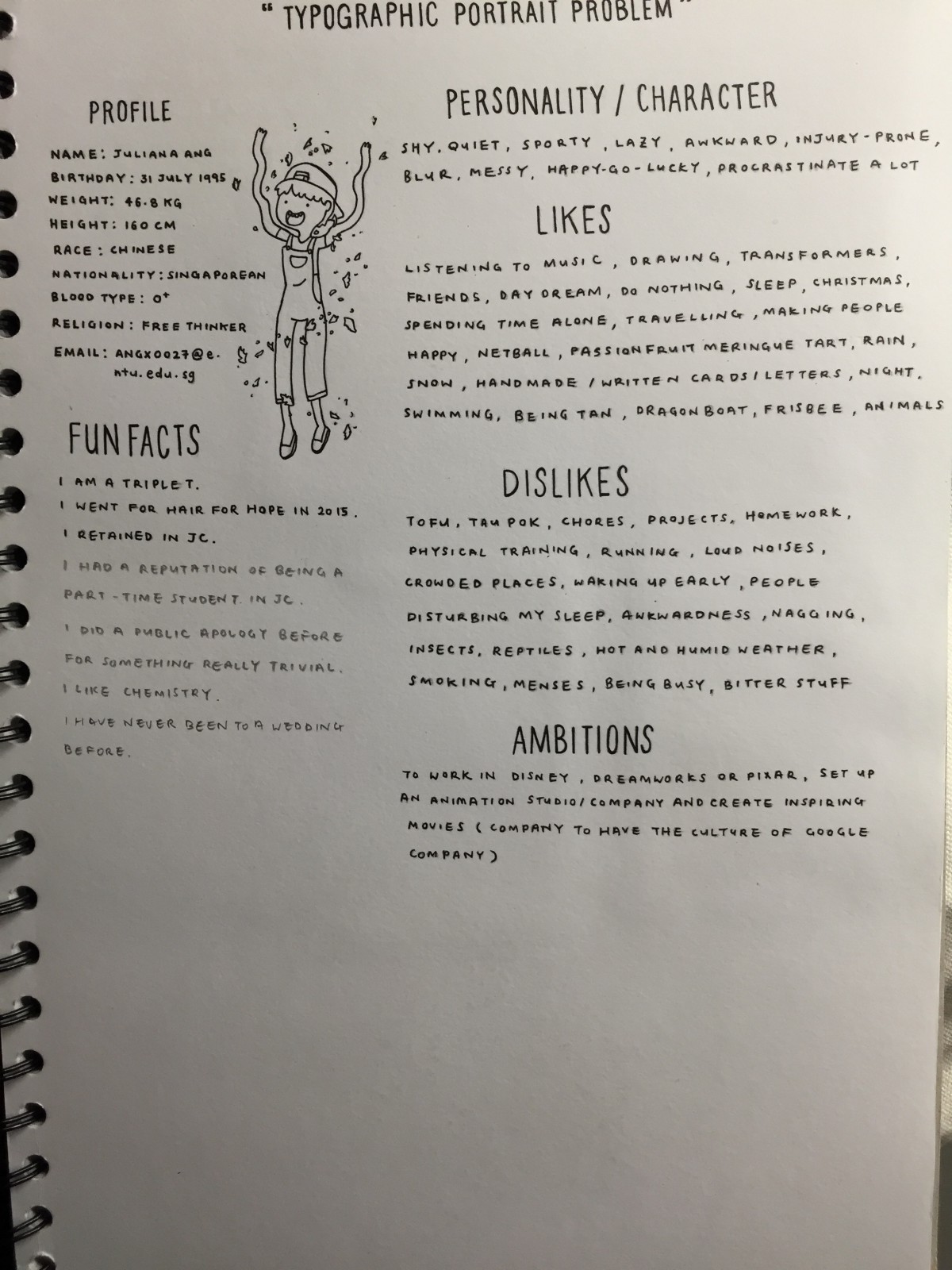 To start off this project, I decided to write about myself in terms of characteristics and personalities and likes and dislikes so that I would have a selection of attributes to choose from to present for this project. 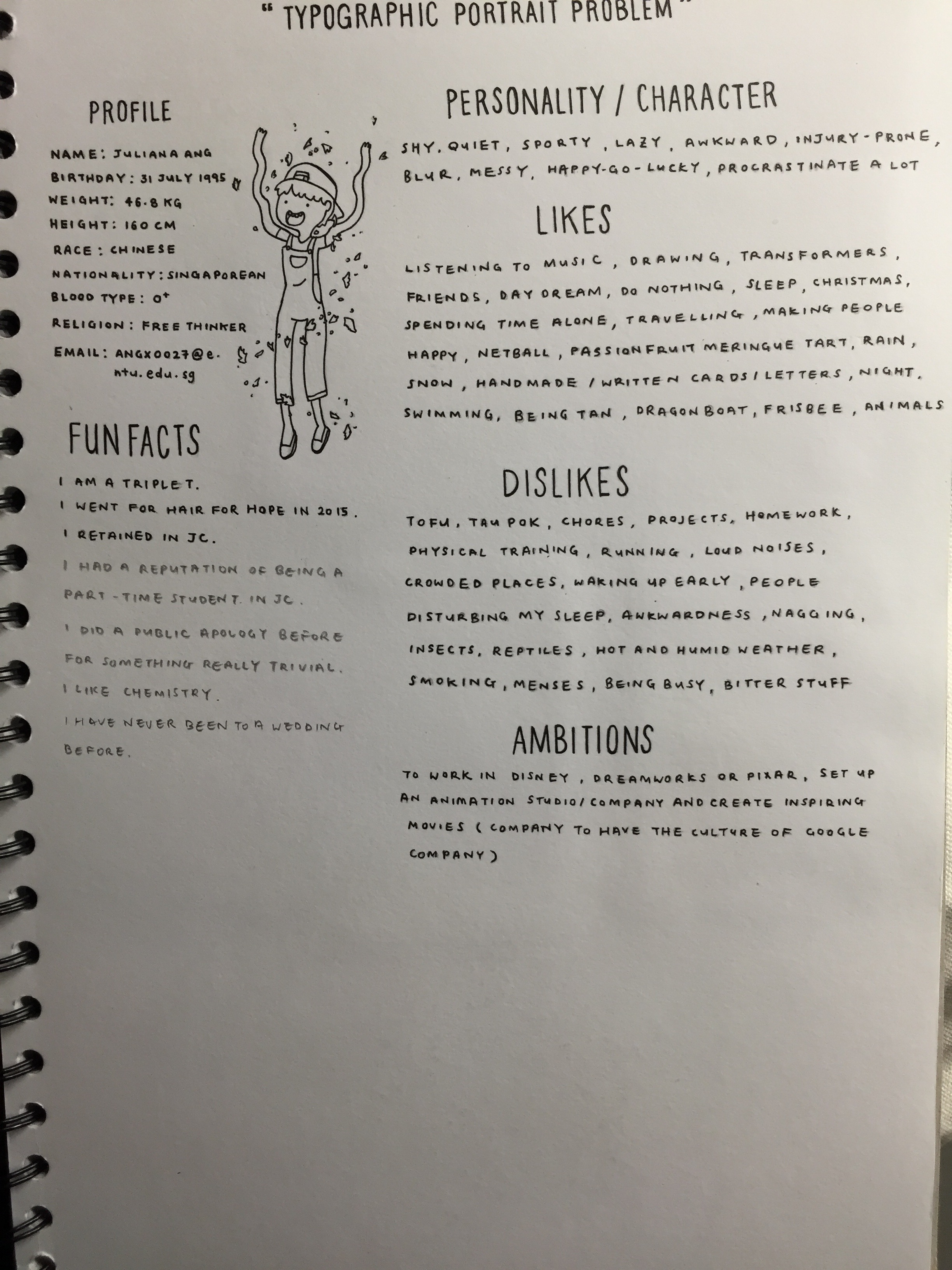 Initially, I wanted to draw my own face and use words that describe my personality to form the image like what Sean Williams did. However, I thought that would be too boring and hence I did not stick with the idea. 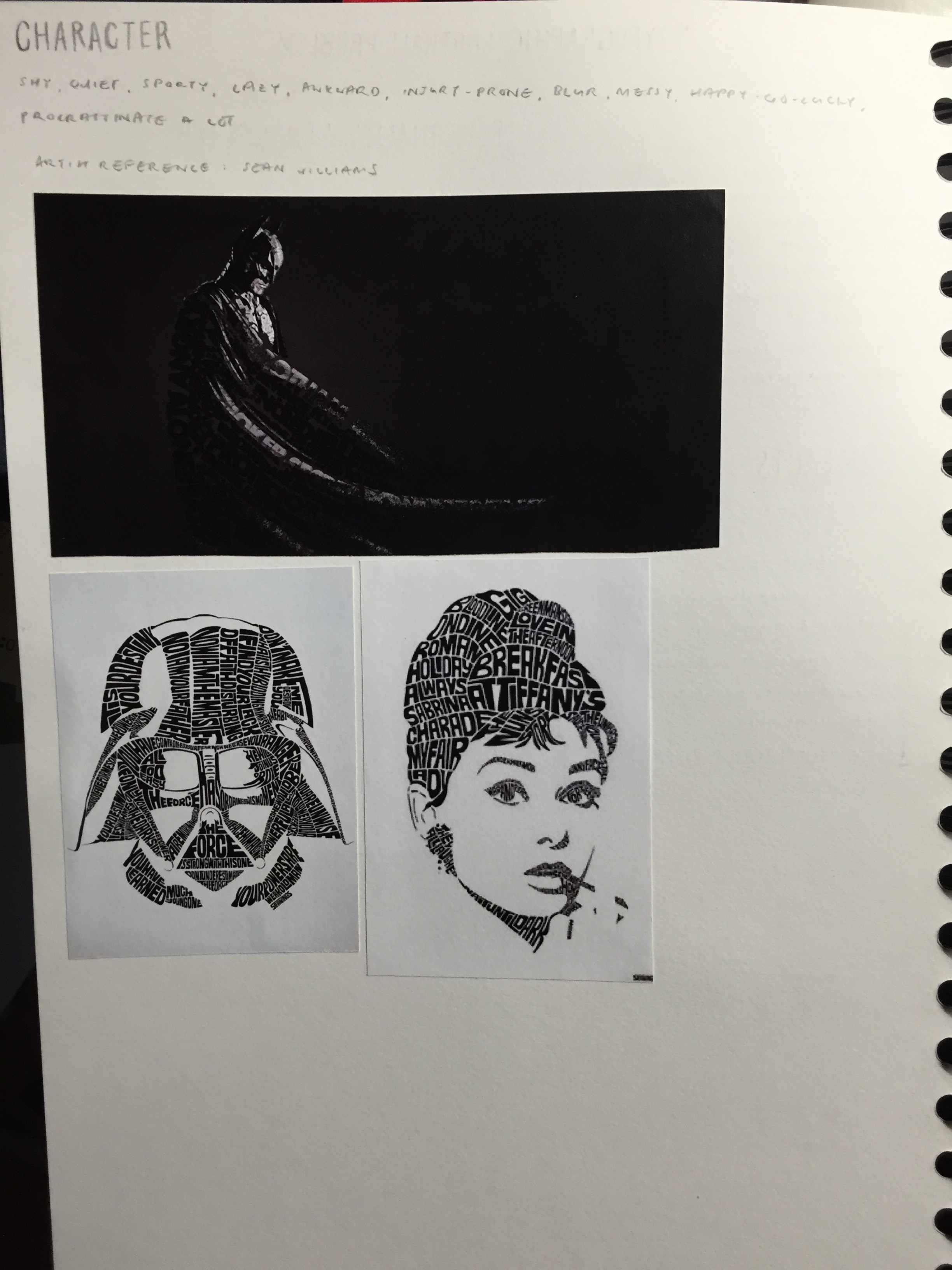 With reference to Fran Efless, I wanted to draw objects that showed what I liked and use words in that category to form the image, similar to the inspiration from Sean Williams. However, after the first review, it was said to be too literal and needed to be more metaphoric. Hence, I scraped the idea as I would agree that if its too straightforward it would not be as intriguing as it should be. These are some doodles that were inspired from what I liked. The last design on the page was with reference to Drew Europeo. I loved his works as his works are simple yet beautiful and I wanted to try to replicate the technique. Basically, the design was to have my name be in the middle and surrounding my name would be little drawings of what I wanted to do or liked. However, it did not turn out to be as nice as I thought so I did not stick to that idea. 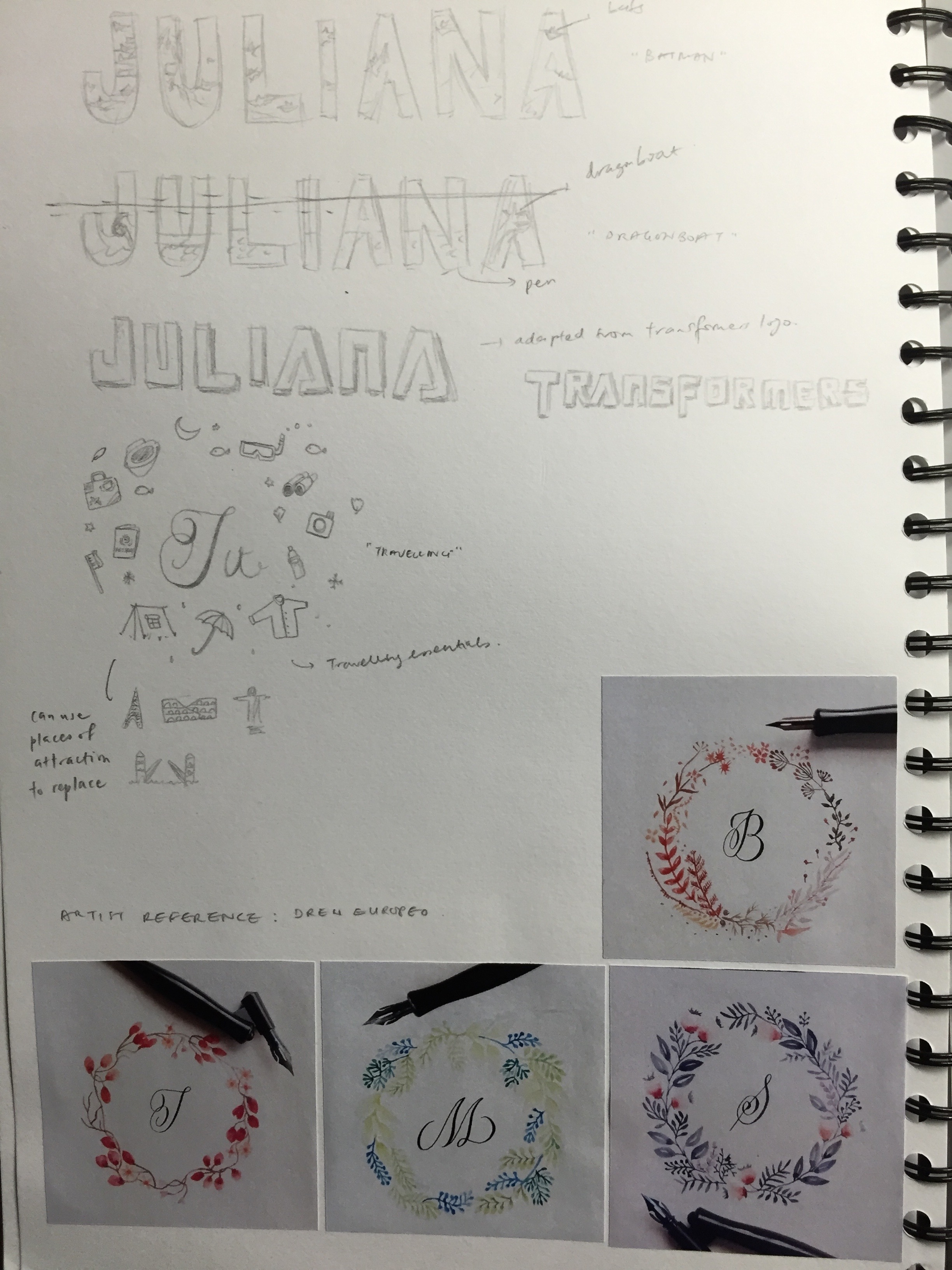 The first design was inspired by an artist on instagram called Kerby Rosanes, where I drew the logo of Disney to show my ambitions. However, given the problem of it being too literal, I decided to trash it as well. After one of the presentations on how we could go about doing our typographic portraits, I decided to do something similar as one of the slides talked about showing part of something instead of everything and from there came about the idea of showing my hairstyles (also cause the slides used hair as an example as well). It was simple yet I thought it conveyed the idea very well and hence became one of my finalised designs. 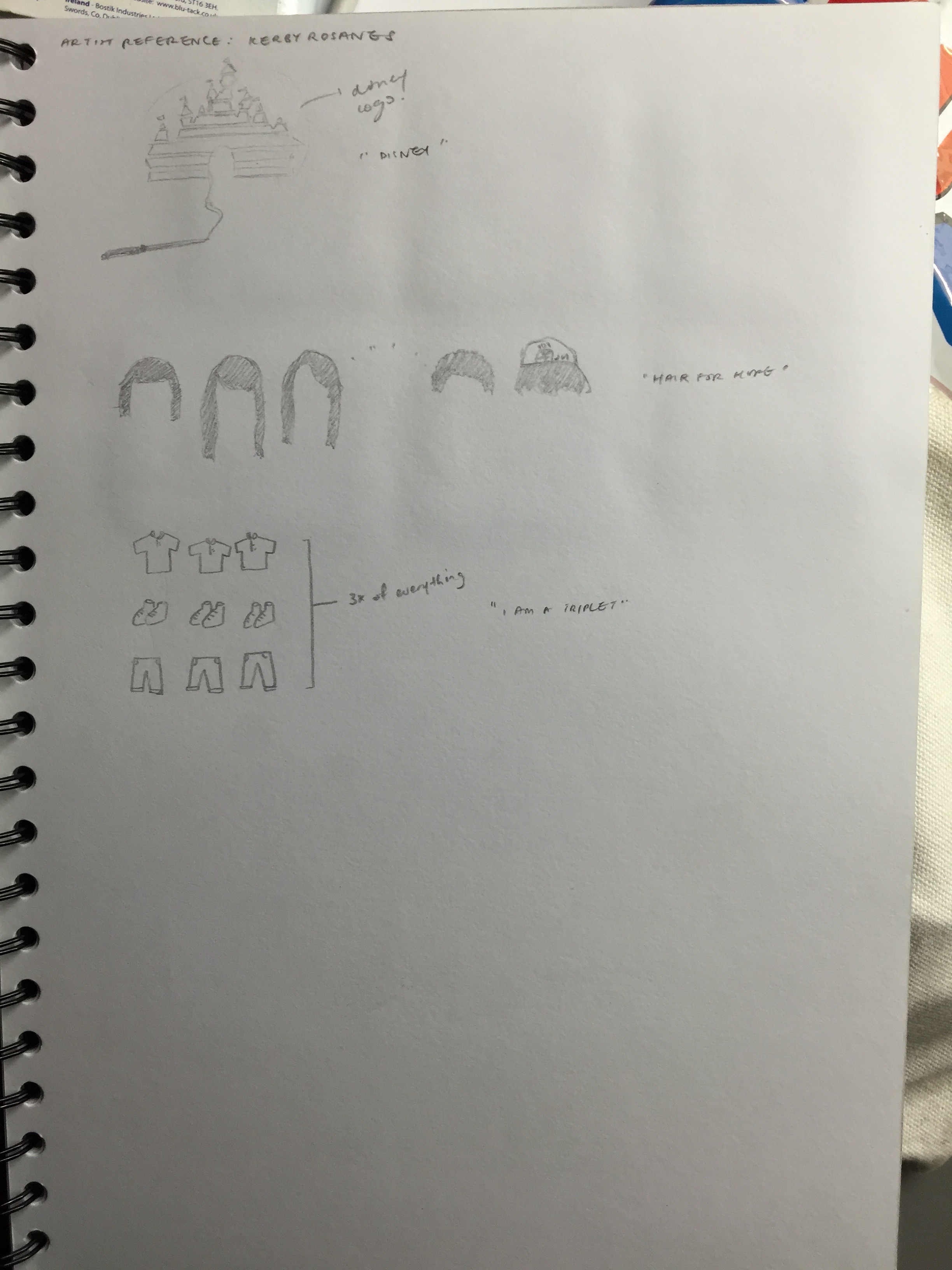 These are works from Fran Efless. I thought doing a drawing of an animal with similar traits as me would be interesting but I could not find one that was really apt for my personality and so I did not use this idea at all in my project. 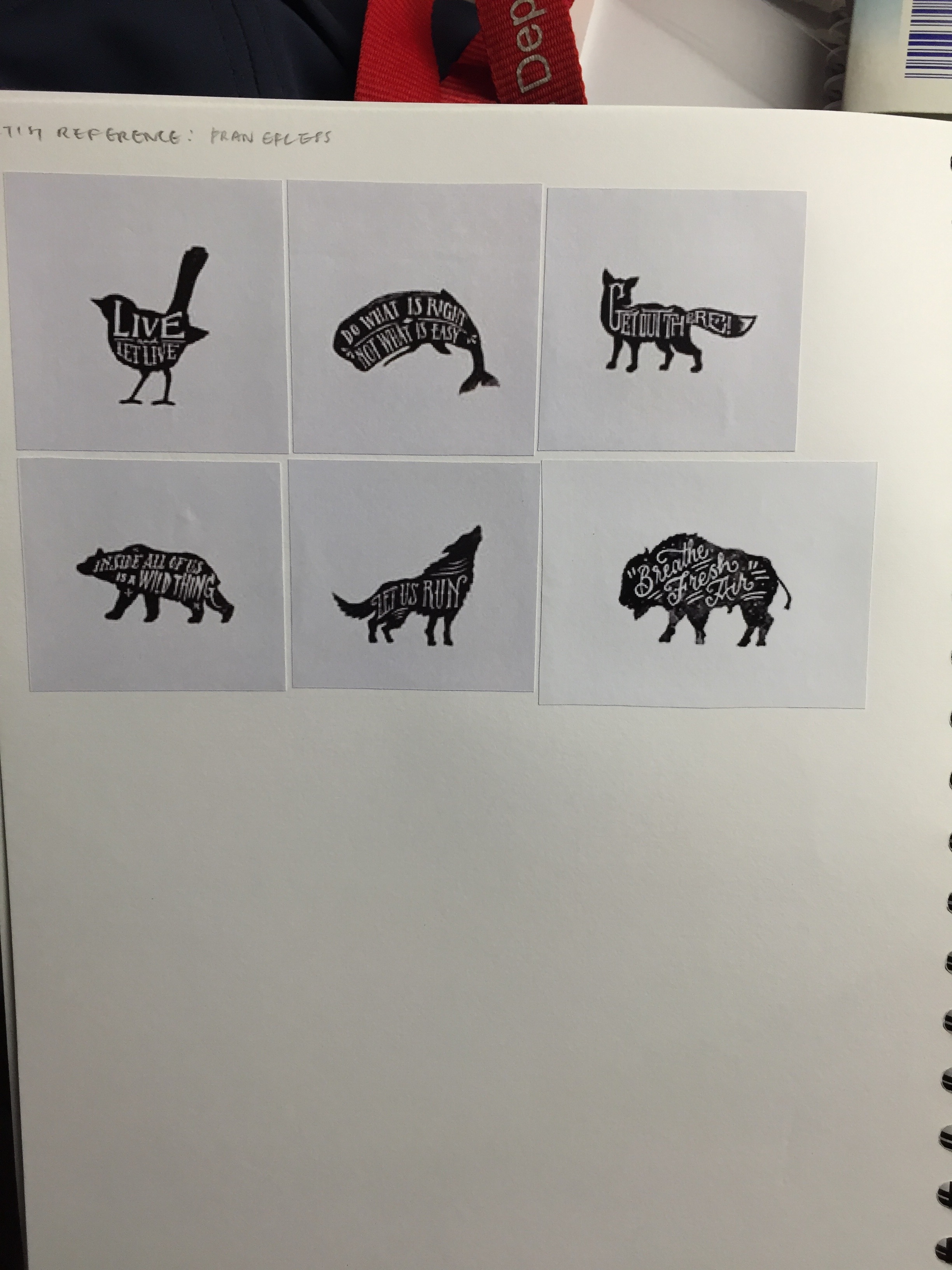 After a lot of thought (that was not penned down), I decided to use Sean Williams works as one of my inspiration for the finalised works. Also, I really wanted to incorporate the things I loved into my work, thus I tried to do it in a not so literal way and also by just showing part of it instead of the whole object.