Our first class we learnt about factors that are crucially considered when thinking about the design of a product.
First of, we learnt that a 2D sketch analysis had to have no perspective and had to be flat. Generally, we should observe and think about the top, bottom, front and back of the object to analyse its design.
Factors concerning a product’s design may include hierarchy, proportion, line axis, symmetry as well as many other elements.
The object I found 3-Dimensionally interesting was an umbrella so I had that brought in for first class.
Shown below is a 2D sketch analysis of the umbrella from the perspective of top/bottom, front/back as well as from its sides which I have differentiated by labelling them as either side 1 or 2.
An additional reference image of the umbrella from the mentioned perspectives is also included for a better grasp of my diagram and explanation. 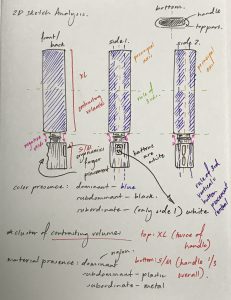 We learnt that the principle axis had to be the length that is longest running down through the middle of an object. By placing a principle axis through the umbrella from its different perspectives we can see that only side 1, 2 and the bottom seems to be symmetrical on either sides of the line. The front/back view of the umbrella isn’t symmetrical since there are 2 varied elements to the two sides.
The left and right are both for ergonomic purposes. On the right side of the principle axis, we can see the placement of the umbrella button that is pushed to actually open the device has actually been carefully thought out. It has been placed nearer to the top of the handle where the thumb of a person’s hand could easily place accordingly. On the left side of the principle axis, we see 2 concave relieves on the umbrella handle. Also for the purposes of ergonomics, it serves as a function for better gripping of the umbrella handle in general.
By looking at the rule of thirds horizontally, the umbrella handle as well as the metal portion serves as a ‘one-third’ guide for the upper portion which compromises of the other ‘two-thirds’. Together, one-third being the handle and metal portion and two-thirds being the nylon upper portion creates the overall structure mathematically.
By looking at the rule of thirds vertically on sides 1 and 2, the placement of the ergonomically designed button and concave relief is centrally placed within the middle range (second area of ‘thirds’). As we look from the bottom perspective, we can see that it is also symmetrical both vertically and horizontally.
When looking at color and material presence, we learnt about the terms: dominant, subdominant and subordinate. Dominant being what is most present, Subdominant being the component that contrasts the one with most presence and Subordinate which labels what is least present. As we look at the umbrella, the dominant would have to be the upper-blue portion, the subdominant being black and the subordinate being the white on the button in the diagram of side 1. If we were to look at the actual picture, the subordinate could be the whites and pinks of the dog logos decorated on the upper-blue portion. Material wise, the dominant would be nylon, subdominant being plastic (handle) and the subordinate portion would be metal (the portion in-between the handle and the upper portion).
There appears to be negative voids around the metal portion of the umbrella (in-between upper portion and handle) which is better understood when looking at the drawn diagram with it being labelled as pink.
Cluster of contrasting volumes can also be seen if we compare the rectangular structures of the handle and the upper portion of the umbrella. Cluster of contrasting volumes can be used in this situation such when sizes are not similar and when comparing sizes that vary greatly from one another. In another case, the cluster of similar volumes is used when comparing sizes that are similar or around the same volume. The handle of the umbrella appears to be a S/M in size since the handle is a third of the overall structure while the upper structure appears to be an XL as its volume appears to be twice or slightly more of the handle.
Pandora 3D Sketch Analysis 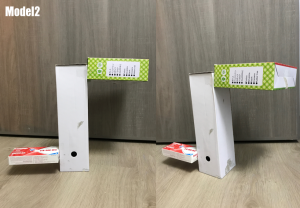