For Micro Project 2 in relation to DIWO (Do It With Others), I had chosen to incorporate a twist to the well-known game or exercise of ‘Connect the Dots’. 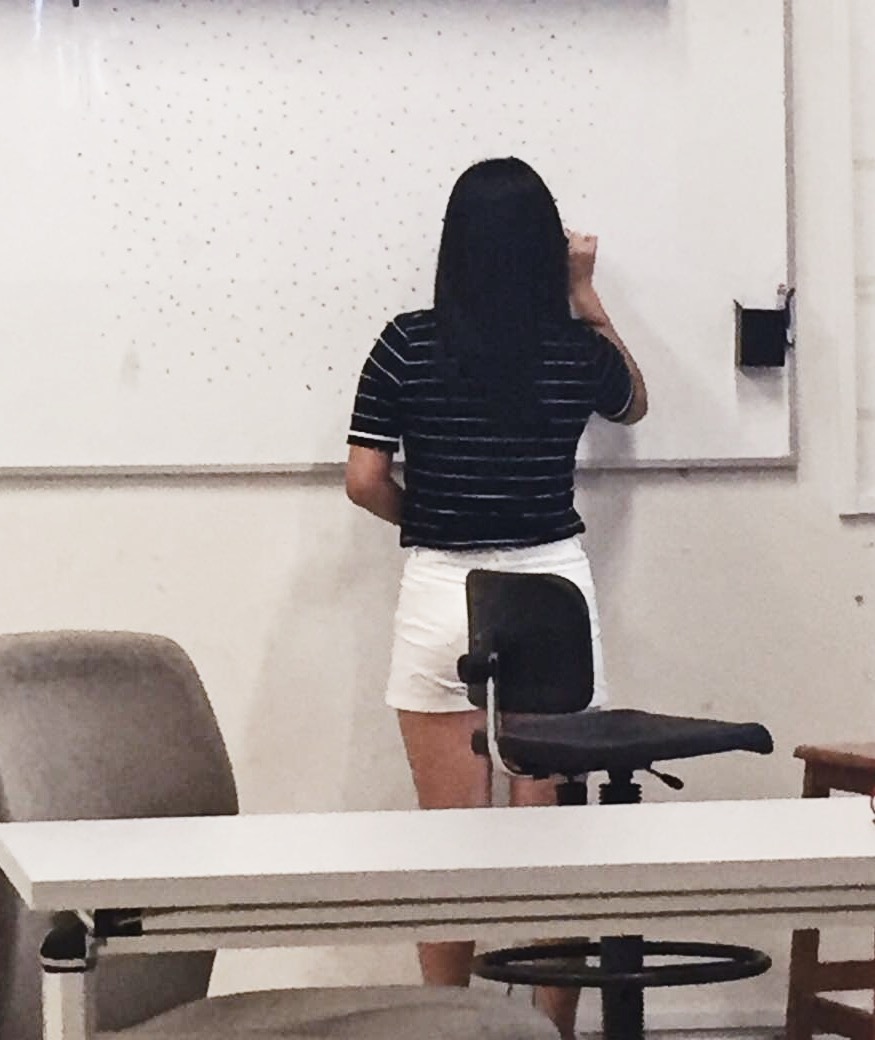 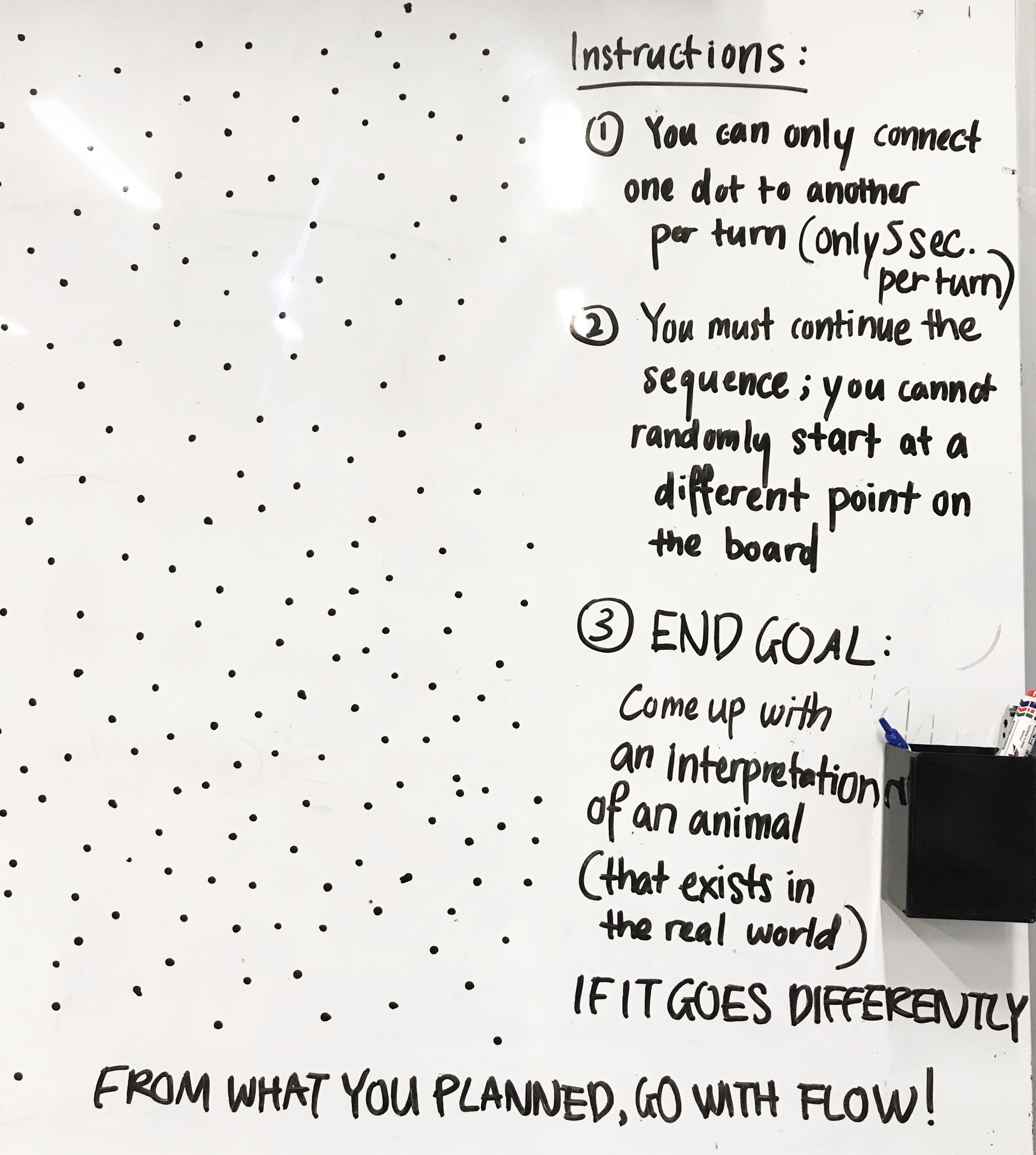 Footage of Connecting the Dots

With this micro project, participants were restricted to the following instructions as listed below:

The end goal of the project involved coming up with an interpretation of an animal.

This collaborative artwork took place on the whiteboard, within the 4D classroom. The amount of time given for completion was 5 minutes. Participants were instructed to line up while turns continued until the whole 5 minutes was up. This exercise was created to constantly challenge the minds of everyone to continue thinking about different animals. Each artist probably had an animal they were thinking about at the starting point of the game. Since everyone had a different animal in their thoughts, the dots connected would have gone differently from what they had planned with each turn taken, forcing them to go with the flow… and eventually conjuring a new animal in their mind with each varying direction the drawing follows through with.

This crowd-sourced time-based artwork is a departure from traditional art making by a single artist since unlike the typical game of connecting the dots, it isn’t restricted to specific numbers that is intended by the artist to follow through and end up with a particular form.

In the image depicted above, the dots are labelled with numbers; instructions to be followed in the form of steps taken. The artist therefore intends for the individual participant to follow through with what she or he has intended for the image outcome to be. In this case, the artist has already decided to line the numbers and dots up to form a rhino. Instead of the participant becoming a co-artist, he or she becomes a helper with no evidence of collaborative work.

Having a white board covered in numerous dots and no restrictions other than for lines to connect from one dot to another allows the audience to participate with at least some sense of free will. By having a crowd to participate, the artwork is constantly evolving with the creative mind juices of different people with varying social and cultural ethics and mindsets. There are many possibilities and direction with which the artwork could flow with.

As Marc Garrett, author of the article, ‘DIWO (Do-It-With-Others): Artistic Co-Creation as a Decentralised Method of Peer Empowerment in Today’s Multitude‘ states:

“It examines the grey areas of creative (idea) control, the nuances of power exchange and what this means for independent thinking artists and collectives working within collaborative contexts, socially, culturally and ethically.”

Similarly, everybody has their own construct of a specific animal. For example, if it was a dog, one person may have thought of the breed Golden Retriever while another may have thought of a Maltese. This may have been due to past experiences each individual has had (such as owning a dog of a specific breed) or what they have been taught when conjuring up an image of a dog (story books). Alongside individual experiences come individual thought processes therefore, the power of exchanging such information through collaborative become crucial. A collaborative artwork such as connecting the dots, connects others by reflecting upon what the previous participant beforehand had in mind as their animal as well as going with the flow of creating something that is constantly new in comparison to what one first had in mind.

With this micro project, participants are not allowed to speak to one another. They are controlled by the participant before them since the direction of line that is being connected may not correlate with the image of the animal they had in mind at that particular moment. The connected lines serve as a mode of communication in this space as the artist before another aids in the direction and process of completing the artwork. Aside from being restricted to the end goal of creating an animal before time is up as well as having to connect to the already created line, part of the artist’s control lies in the responsibility of the previous participant since one path out of many directions had been made.

Instead of a single artist having a specific goal in place when creating an artwork, the audience/viewers become the artist, creating what they envision with a multitude of free will aside from the platform basis that the artist has set up within the space; a canvas of dots.

Varying Differences From Other Artists

Similarly to Human Clock by Craig D. Giffen, this micro project involves the participation of numerous people towards a singular goal. In Human Clock, the single goal is the posting of each specific time from varying people in different places in the world. However, what differs Connecting Dots to Human Clock is that it is of a less specific genre. To come up with an animal, there are many different breeds and types to think about. On the other hand, with Human Clock, it is restricted to time as itself. Another thing in which Connecting Dots differ from Human Clock is that it does not involve web based interaction; rather, it uses physical interaction as its social interaction platform. 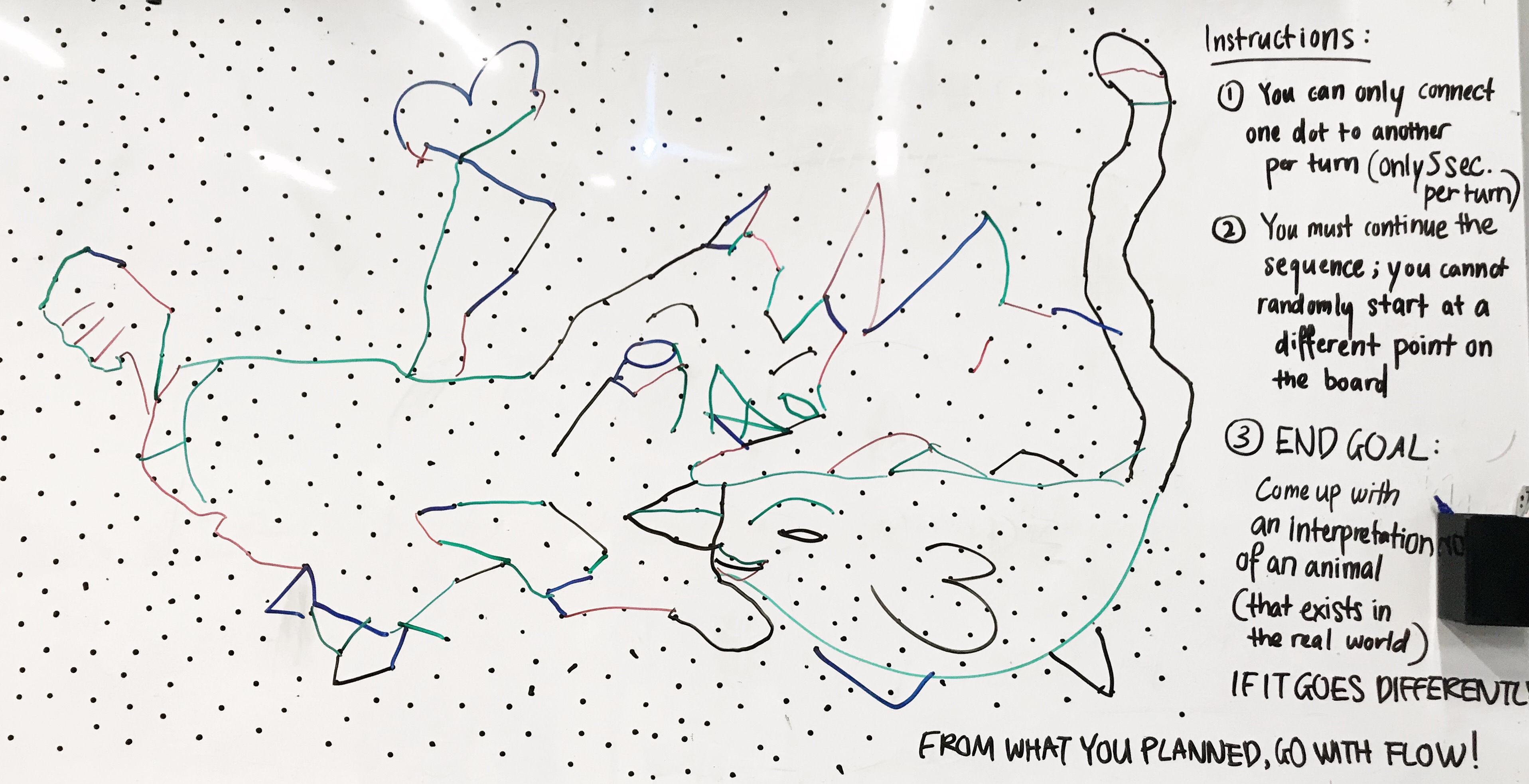 The above image depicts the end result. Clearly, nobody could have the exact image of the above animals in the minds at the very start or throughout the entire process. Only this exact work of art could have been produced by a crowd. There was no predictable outcome as to what the animal would be at the very end. The artist had no control over what the audience would create on the board and her only control was time; with each turn restricted to 5 seconds.