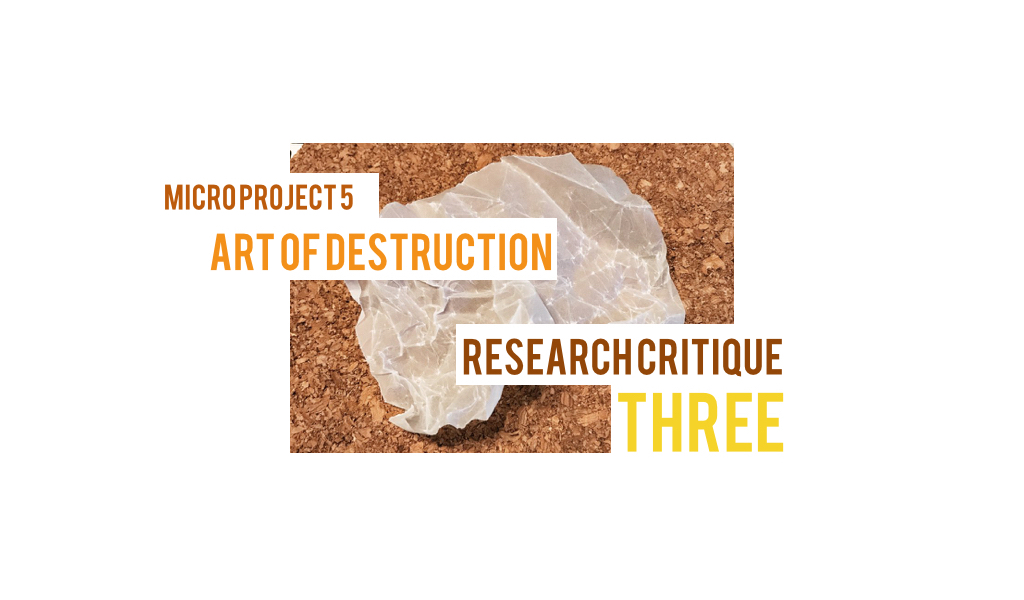 The video footage for micro project 5 has been uploaded above for easier reference.

The summary of micro project 5: Art of Destruction can be found here in my other post.

As my group and I went through with this micro project, we realised that it was physically impossible to proceed with caution. What we had envisioned to have happened at first was that the more paper turtles we unfolded and folded, the end result would have eventually concluded with the disappearance of paper that was constantly used to fold the origami. However, this wasn’t the case at all as the paper could no longer be split into smaller sections for the disappearance to occur. This was one of the problems that we had to embrace throughout the progress of art destruction.

“… create a new protocol after shattering an earlier one.”

“… destruction can change into the creation of something original.”

“… understood as an alternative way of representation or a new language, its tipping point has passed and the essence of its glitch-being is vanished.”

“… no longer an art of rejection, but a shape or appearance that is recognised as a novel form (of art).”

With our micro project, we wanted to juxtapose the perfection of origami and its norms. In this case, when Menkman discusses about the idea to “… create a new protocol after shattering an earlier one,” the new protocol that we had in mind was destroying the pristine texture of paper (earlier protocol) and replacing it with crumples, tears and textures, which is usually seen as repelling and unsightly (new protocol). Because origami art has already had its conception of being folded with care as well as having the perception of being prim and proper, this image is readily taken in by the audience and it is perceived as ‘right’. With this norm put in place, the image of standardised origami becomes an ‘unoriginal concept’ that becomes lost and forgotten. A routine of typical paper folding origami slips into the unconscious mind unlike when destruction is suddenly applied. Quoting Menkman, “… destruction can change into the creation of something original.” With the introduction of unintentional torn paper edges and unclean foldings, it becomes a form of destruction (a reaction against typical origami norms). The unnatural form that is not familiar to the audience stirs up a new reaction because something original that they are not used to seeing is being created. The end result is a paper turtle that is creased and worn out overtime which may not be sightly at all.

If these ‘problems, inconsistencies & accidents’ of creased paper start becoming embraced today and used within future paper origami art, the originality of destruction eventually fades back into an unoriginal state as its “… alternative way of representation and its tipping point is passed.” By starting this movement and embracing these so-called ‘problems’, the starting point of art rejection prompts for readily future acceptance.

With the choice of video media as our medium, we decided to tweak the natural course of events that follow. The original video was about 13 minutes long in duration yet we had it sped up by 8x. The end result was a 1 minute 40 second time lapse of the actual events that were happening. Here, destruction is portrayed to deteriorate the natural flow of events followed one by one. Instead of experiencing real time, conversations are shortened as squeaks, sharp and low pitches as well as murmurs. Actions cannot be determined clearly throughout the progress of the video and the main focus is only placed on the completion of the different rounds of paper turtles being folded. In this micro project, we are attracted to what becomes familiar to us, which is the shape of the paper turtle that our brains eventually, unconsciously accepts the value of texture and creases within the paper. Although real time is glitched, imperfect & noisy, conversations between people are no longer comprehendible and actions seem almost robotic within the video, we are still attracted to the content within the video because there is suspense from the unpredictable. With the unnatural effects taking a toll upon the natural course of things, we are drawn/attracted more due to human curiosity.

With the use of paper medium while folding the turtle origamis, the conception of folding an origami once as a decorative form of art is broken. Instead, we take apart the creation, destroying the natural form of paper and attempt to create once again. The whole process becomes a continuous cycle of creation and destruction and the material eventually deteriorates to become progressively imperfect and noisy. We are eventually drawn to the uncomfortable feeling of textured paper.

Glitch as an Act of Artistic Expression

In Interview with Chip Lord, Chip Lord (One of the members of artistic expressionist group, Ant Farm) tells us about the history and content behind one of their art installations: Media Burn (1975).

By combining two living American icons back in the 1950s, Ant Farm wanted to explore destruction of the American dream that had been significantly long standing through the use of television sets and cadillac cars. These two especially, were considerably great American icons during that time back in American history. Members of Ant Farm would wear astronaut suits while hopping into these cadillac cars and driving them at high speed into stacks of television sets. This collision was a representation of a message: that it was the destruction of the long standing American dream. The unfamiliar sight as well as the form of destruction between two previously unparalleled objects with no previous connection is therefore, a glitch.

Similarly to our micro project, the first part (the first origami is folded and then unfolded) before the repetitive cycle of constant creation and destruction (repeated cycles of the first same action), becomes a glitch. Just like Media Burn (1975)’s collision, our glitch is impactful in that the connection between creation and disassembling is paralleled to one another as a representational message that origami need not be made with the ideology of being neat. This is a norm that had settled with time. When this glitch of artistic expression (previously a personal opinion) is constantly repeated, it suddenly becomes a constant that is familiarised (where a new norm is developed and accepted with time again).