“AAAAAA WHAT TO DO.”

I have never done motion graphics before and I have never touched After Effects until this very assignment. I am so very concerned how I will survive this project.

Anyways, the main idea is

Reminds me of 2D

Anyways, I started asking myself what is unique about myself again… or what people think of me

What I think of myself:

What people think of me:

I’m considering what I should represent myself as. 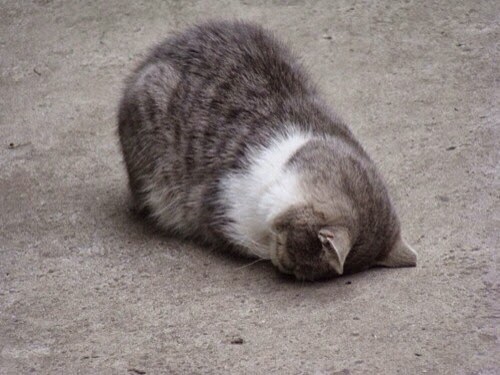 It will be like a introduction of myself? Like summary of my traits but its kind of direct.

(it’s relatively less work compared to Idea 1 though lol)  And more things on After Effects I think?

Or it could be changing forms of representations of me 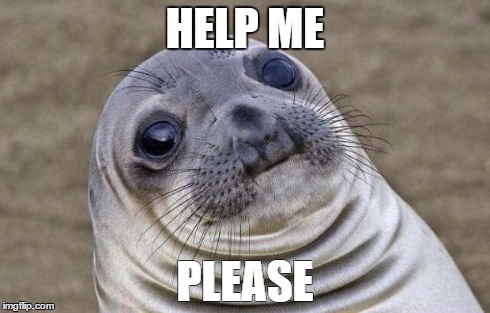 I came up with a lot of things but nothing hit me in particular.

I took some time off this project just to think about what was plausible and representational of me.

The idea i had was actually influenced (kind of) by Symphony no42, where by there are a lot of random and representational things.

I think changing forms are damn cool!! (and also a lot of work -cries)

Taking a step back

I realised I was forcing myself to describe myself when I probably don’t even know who I am.

I took a step back and tried to see myself from someone else’s point of view.

How did my friends see me?

Other than my outer appearence, what’s inside me that makes me the person I am?

Which lead me to this… 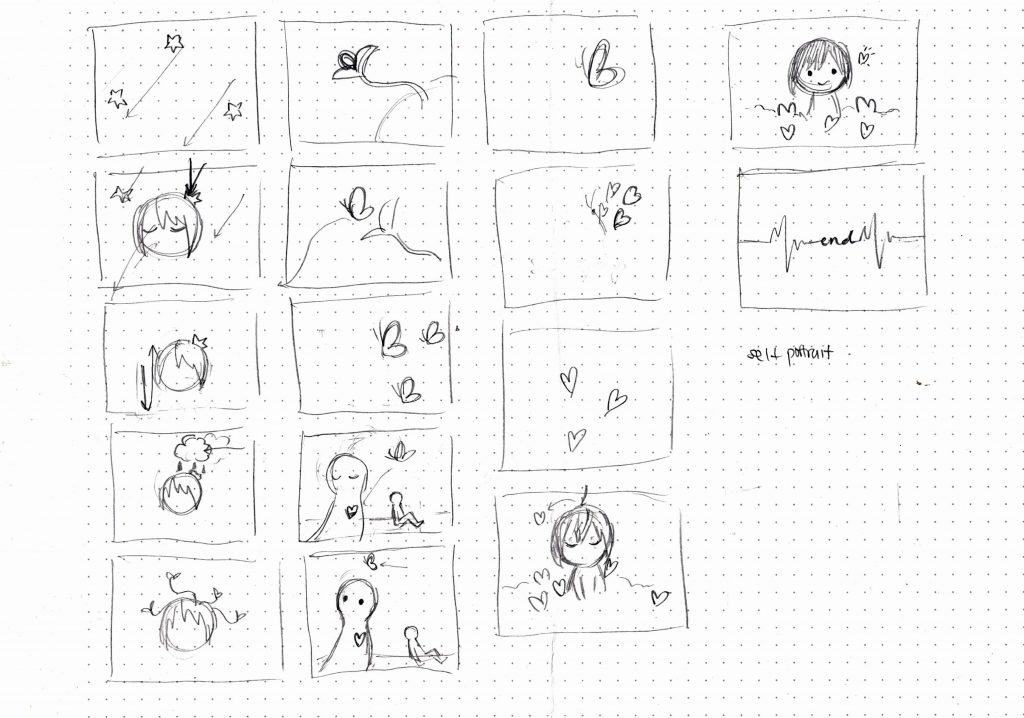 I changed up some parts in the final but I more or less followed this storyboard.

I realized what partly defined me was also my tendency to think of those I care about.

Rather than focusing on my self alone, I decided to do something representational.

In short it’s a piece about me thinking of about people whom I care about.

My take towards people I care about is always:

I will keep them on my mind.

I like sending people random messages to thank them or encourage them.

For some reasons it makes me happy lol. It does not matter if they read it or not.

I just get what I want to say out of my mind. If I don’t say it now I might never get to tell them about it.

To be honest it is probably annoying and random HAHA. (i still do it lol)

“why isnt there specs?” you ask

I don’t wear specs most of the time, only when I am in school will I be wearing specs since I hate them.

The colour purple best describe my personality. I’m not sure how to explain it but compared to blue or green, purple has this mysterious but also whimsical vibe which partly defines me.

As for the other colours, I picked what worked and also colours that could suggest my personality.

Stars = Hopes and also not

There are yellow and pink stars in my video. The yellow stars are just like hope or wishes. While the pink star is an anomaly.

I think too much sometimes and the growth of plants from my head is to suggest the random and quick thoughts that pops from my head. The fact that I over think is reflected by my OSS this sem i think… I keep redoing because I come up with new things or ideas.

They can be seen as a form of distraction but It carries two meanings for me.

I think butterflies are shaped like hearts and they can be seen as messengers.

In my storyboard/ final, the flower bud changes into a butterfly which flies into the hearts of some figures.

Which essentially = ” I’ll  always be in your heart.”

It’s just part of me to do cheesy things maybe.

Anyways, I tried to make use of After Effects to push my own story.

Luckily I discovered the graph function when I messed around with things on my own. It help me add a kick to the animation.

I drew everything how I will do it instead of looking for a style someone else used. It’s solely because this video is about myself, hence I chose to draw it in my own way.

I drew all my panels using Photoshop.

I made sure to remind myself that if I do not separate the different components into separate layers, I would probably be in real pain so I consciously checked and named every single layer.

Knowing that by grouping the layers, they will be imported as composition, I tried kept everything not grouped just so its easier to see everything all at once.

I don’t exactly have a style guide because I knew what I would be using since the beginning.

I know which are the colours that can represent me.

I made use of a slightly muted purple as back drop but also to create a sense of continuity. 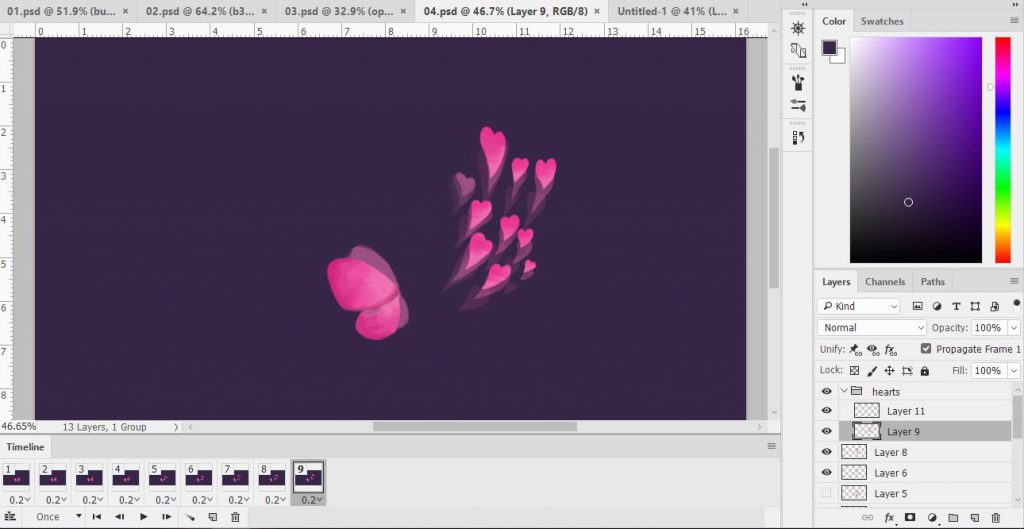 I combined AE and frame by frame 2D animation.

TBH, I only know roughly how I wanted it to look and I have never animated anything before it was kind of scary and exciting at the same time.

At the very least I tried and learned that I can. 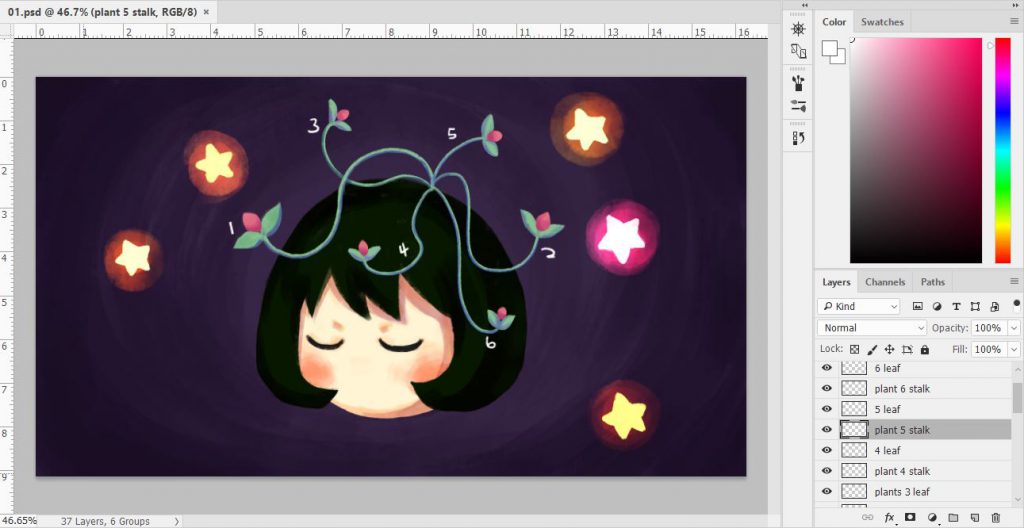 I even went ahead to number the plants so that I know which is which when I import in AE.

Just so it is easier to see… 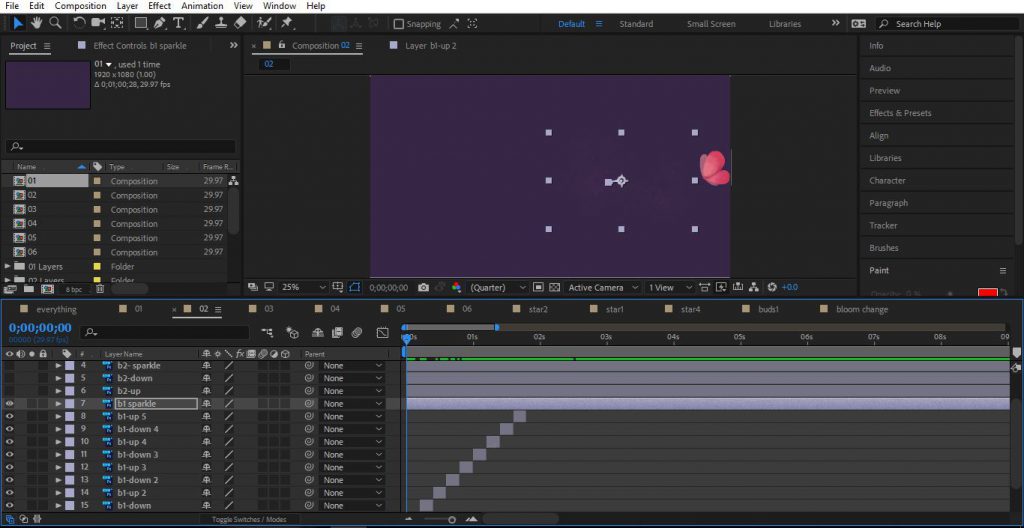 The butterfly movement is frame by frame haha… (cries

I made use of 2 frames and repeated it

i just did what I could think of because I don’t think AE is so advanced that it can produce any in betweens for me…. 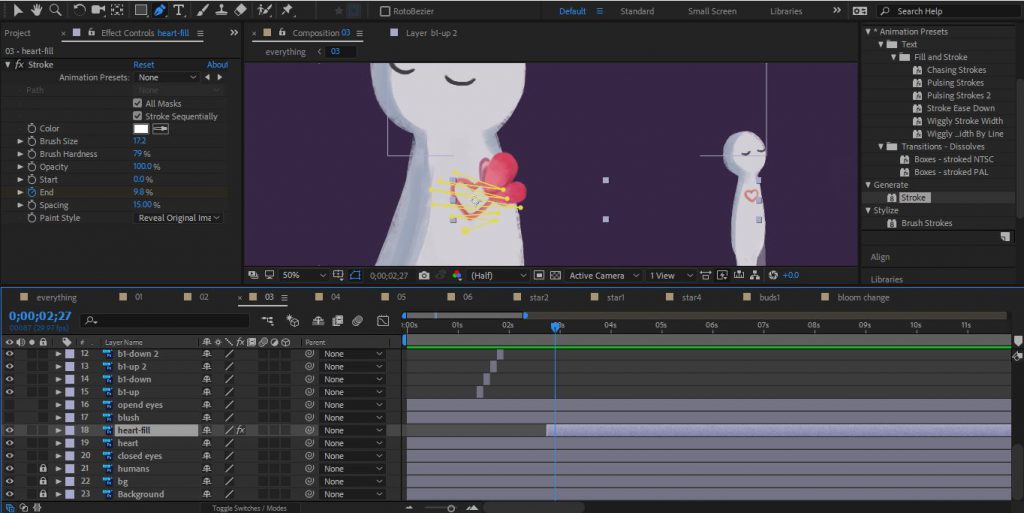 Here I tried different effects to see how it will affect the look.

I tried, Masking, scaling and lastly opacity. In the end Opacity was the most suitable so I went with it.

I did this to other scenes as well but since I roughly know what I wanted usually I just jump straight in with what I want. 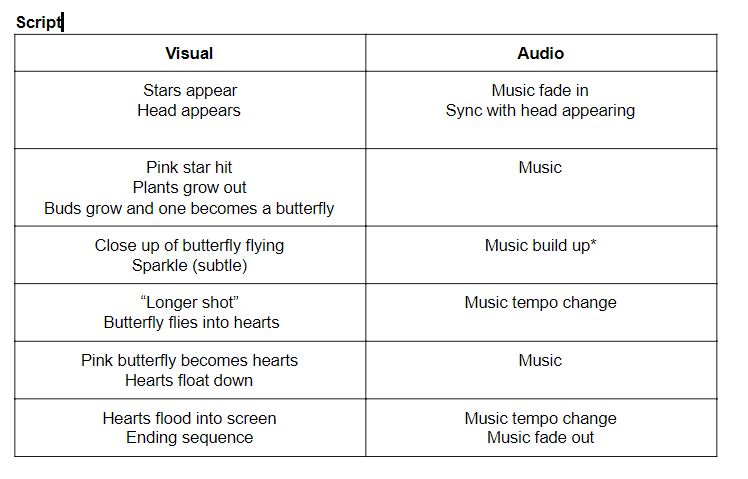 Keeping in mind the audio helps to establish the mood, I looked for something that was not only of my liking but something that suggests about my personality as well.

This is “self portrait” after all.

I really should just export only after everything is finalized.

IT IS DONE AAA

Honestly, It never occurred to me sending letters or messages to thank people or encourage people would be something cheesy to do lmao.

Until I really thought about it recently.

Anyway, I think this reflects my mental state on establishing emotional connection with those I care about. And I am quite selective with whom I do this to.

I guess I just want to make those I care about happy.

I guess I just want to create things to make people happy or stuff that touches people’s heart.

I FINALLY LEARNED HOW TO USE AFTER EFFECTS

I was so worried at the beginning if I could really use it to produce anything at all. At least I know how to use the basics now.

Anyway, I think I could have done better in planning. For instance, the transitions.

I learned a lot of technical skills despite the fact that more than 90% of the time my brain was like “WAT?” in class.

And also inspiring classmates who helped encourage me to push through. I didn’t give up thanks to them haha.

I am a slow learner I cannot deny this fact I had to slowly pick up things at my own pace.

Of course, I also had some fun.