What is UPPPP my dearest pretty and handsome classmates. As we approach the end of Foundation 2D as well as end of year one , I would like to say thanks for being such awesome and supportive classmates. I appreciate all feedbacks, encouragement, suggestions, advice and critiques during every session. it was definitely fun working with all of you and see y’all next year in school!!

Anyway back to the main topic, the final project of Zine is Completed finally!

Concept
My main concept is simple. Since this is the final project I would like to do something that is related to myself. Not that I am narcissistic, just that I would like to have something I can keep. Also I would like it to be like a mini bibliography of myself such that anyone who reads this Zine can instantly get to know me like thousand times better even without having to speak to me at all.

The key theme is film. As I will be majoring in film next year, I would like to incorporate the use of film inside the zine. As we all know, there is 3 parts to a film, or any stories for that matter.

The beginning, middle, and end. Which is how I divided my Zine according to.

I also reference the 3 stages of productions into my zine. You will see what I mean below! 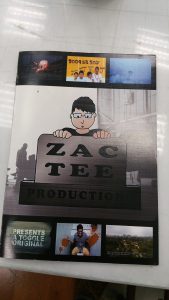 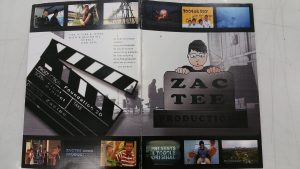 The cover page is simply, when opened up, suppose to resemble a film strip. The sprockets of the strip contains Screenshots of my previous work, be it from school, work, internship or simply self exploratory work itself. 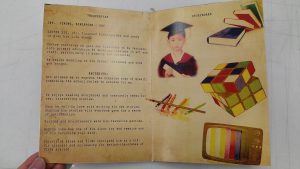 This first page is the pre-production process. The font used is courier 12, which is the standard font for scripts in scriptwriting software. I did this to make it resemble a script because in pre-production its all about scripting and coming up with the storyline. In other words, the beginning of life – Setting the foundations right.

In this part I talk about how I slowly gain interest in reading, storytelling, art and craft, drawing, got into puzzles and magic and became interested in watching TV and the behind-the-scenes of the various movies and shows. Basically its things that got me curious, got me intrigued, and things that made up of mostly who I am today. Once I got my ‘shape’, Im then ready to move on to the next part. 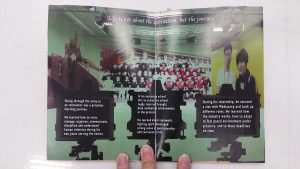 The middle part, also known as the production is where you execute whatever you have learn and prepared in the previous stage to actual use. The background of the page is a setting i a green screen studio because that is where a lot of modern filming take place especially those that require the high use of visual effects.

In this stage I talk about some major events in my life that allowed me to apply what I have learned previously, such as the military, in school sports team, and during internship. Of course, I continue to learn new values, skill sets, and grow along as I venture on. The text appears on the teleprompter to showcase some of the equipment people use during filming, particularly during interviews or news reports where the host have to read off a whole chunk of words. 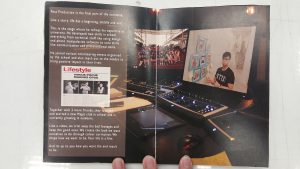 The ending part, also known as the post-production, is where producers edit their videos to get ready to be published to the public. In this segment, the video editor trims and delete the bad parts away, while keeping the good parts and putting them together nicely with transitions. This is especially true in life as well.

Constantly we are improving ourselves and learning everyday in this journey. In this page, I showcase some of my recent involvement, such as volunteer works and social commitments. Also, university is also the so-called last stage for me in a sense that I would be out there working once its over. Therefore its the final chance I get to trim the flaws off me and improve on my current strength.

Overall, this semester’s 2D projects was better then last semester I thought. I managed to explore more mediums I am not comfortable with such as photoshop and a little bit of illustrator. I get to try out experimenting different colours, concepts, themes, and ideas. Brainstorming for such projects was always the toughest , getting the concept right was impossible, but once you are done there was a high level of priceless satisfaction.

Overall I enjoyed it a lot! Thank you everyone and Joy for the awesome Semester! Have a nice holiday everyone!

← Final Project! The Book of Reflection and Inspirations :D