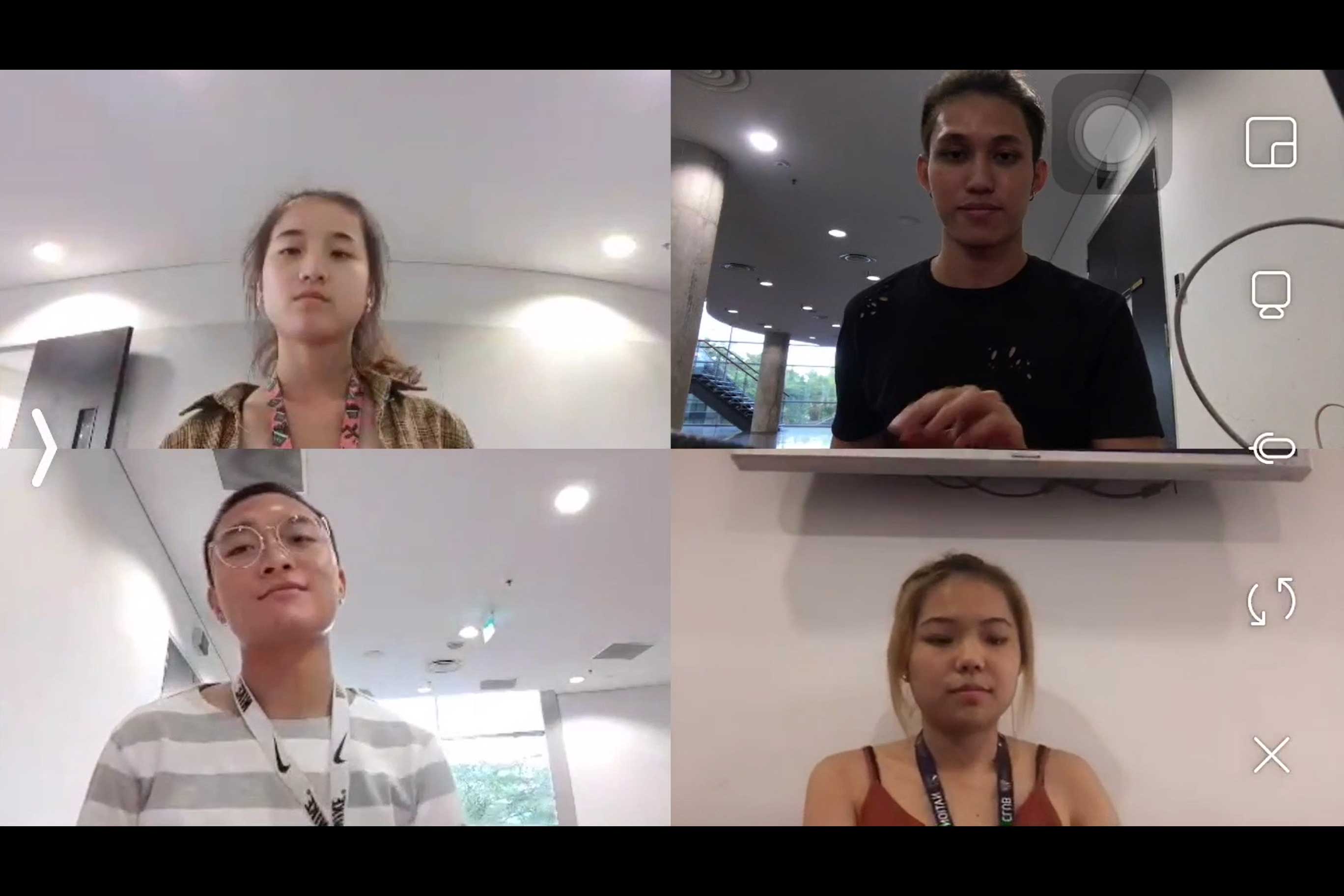 Description: “Eat in Sync”, as I like to call it, is a collaboration recorded on Instagram’s quad-way video call. The performance choreographed on the quad-split screen is a statement about how the internet and its various platforms allow people to connect for a moment even though they live in different places and time-zones.
The video starts with the four collaborators being busy with their lives in their separate spaces. The four spaces although are far apart in reality, with the internet, they are only separated by a thin line. The collaborators then seemingly pass objects to each other through the thin line, breaking the boundaries of space and time.
The four characters then come into sync when one of them distributes a part of a sandwich to the others. While one may be eating breakfast, the rest could be having their lunch, dinner or supper. The sharing of a meal represents the connection between the four collaborators.

Objective: To let viewers understand that if people can or will collaborate over the internet or other platforms, anything is possible. Boundaries are broken and the collective mind can achieve things never done before.

Overall Experience: While there were difficulties in choreographing and synchronising the performance, the collaboration taught me the importance of real-time communication without any lag and waiting time. If this problem can be solved, there would be lesser hindrance and lag in collaborations and communication.

Out of all the 3 Micro-Projects,
which project did you feel you had the most creative control? Why?
As an individual, Project 1 allowed the most creative control. Working alone will always allow the most control as there are no objecting opinions or additional injection of ideas and comments. You, yourself will have full control of your work, assuming there is no specific brief or superior to “approve” your work.

… which project had the most unpredictable outcome? Why?
Project 2 had the most unpredictable outcome, evidently and due to the mechanics of the project. Firstly, it was an activity that allowed the participants to engage with anonymity and had no facilitator. The instructions to participate were short and vague to allow participants the freedom to express themselves in whatever way they wanted. There was no direct consequence to their actions hence their behavior would be unpredictable and would depend on other participants in the activity. Their engagement with each other will produce different outcomes.

… which project best illustrates the concepts of DIWO & Open–Source? Why?
Project 3 would best illustrate the concept of DIWO while Project 2 would illustrate Open Source.
The two concepts, it seems the main difference is the type of collaboration. DIWO would involve many collaborator who have a say and are involved in the process and outcome of the activity while with Open-Source, the participants might not be directly involved and have no power to change the mechanics or rules of the project.