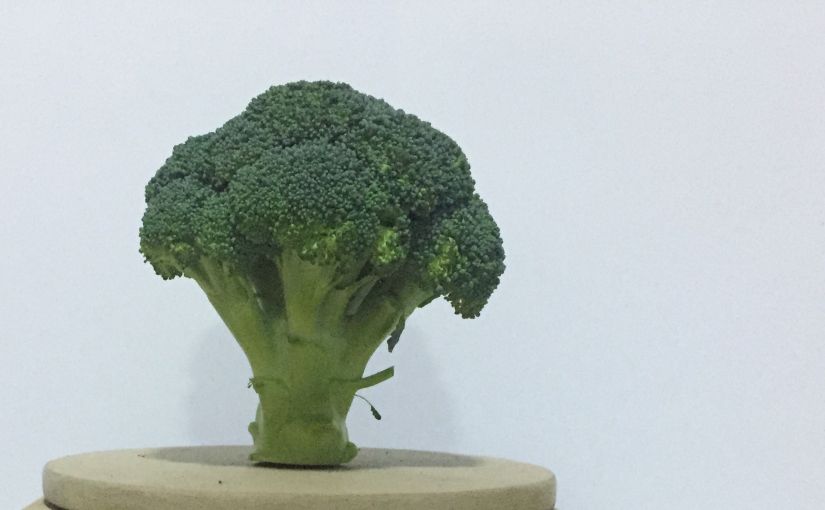 After watching the video and doing some research on the dance piece, I derived 2 words from the dance and tried to think of ways to express the words

While researching for kinetic sculptures I found a reference that reminded me of the double pendulum and I was thinking that I could make use of physics toys (Drinking bird, Helicone, Perpetual motion machine) in my sculpture.

I first tried making a double pendulum with paper and inserted clay in some areas to make it heavier. I realised it was quite difficult to make it work so I didn’t use it. 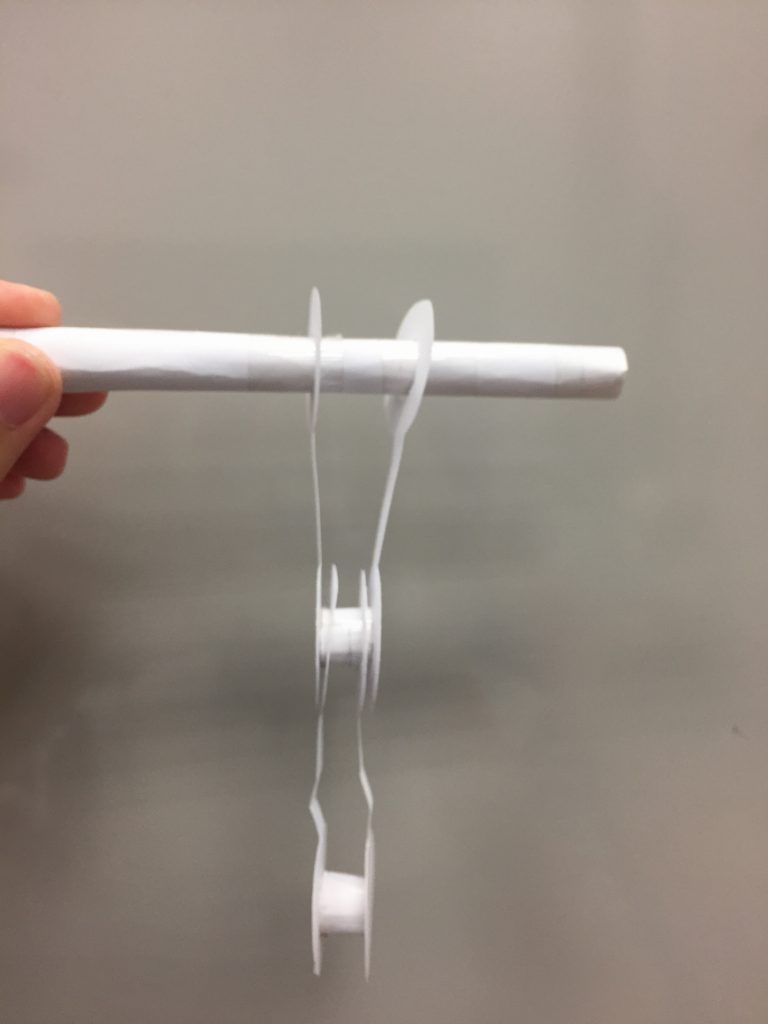 I also thought of making a puppet or robot since the dance was rigid and it reminded me of this exhibition I saw in Taiwan.

After the group consultation, I got to know that the video is supposed to show Flow vs Rigid/Natural vs Mechanical. I went back to watch the video and I thought it looked like a kids show, so I was thinking I could make  a mechanical toy with natural materials.

While researching on mechanical toys, I found a website that teaches people to concepts behind the toys and how to make it (http://www.mechanical-toys.com). The website shows that the mechanical toy works by turning the rotational motion into an up/down one but I wondered if it was possible to change the axis of rotation instead.

I tried to research on that but only found bevel gears which I can’t really make without a machine or 3D printer so I decided to just go ahead and make a small model to see it the normal gears could work. 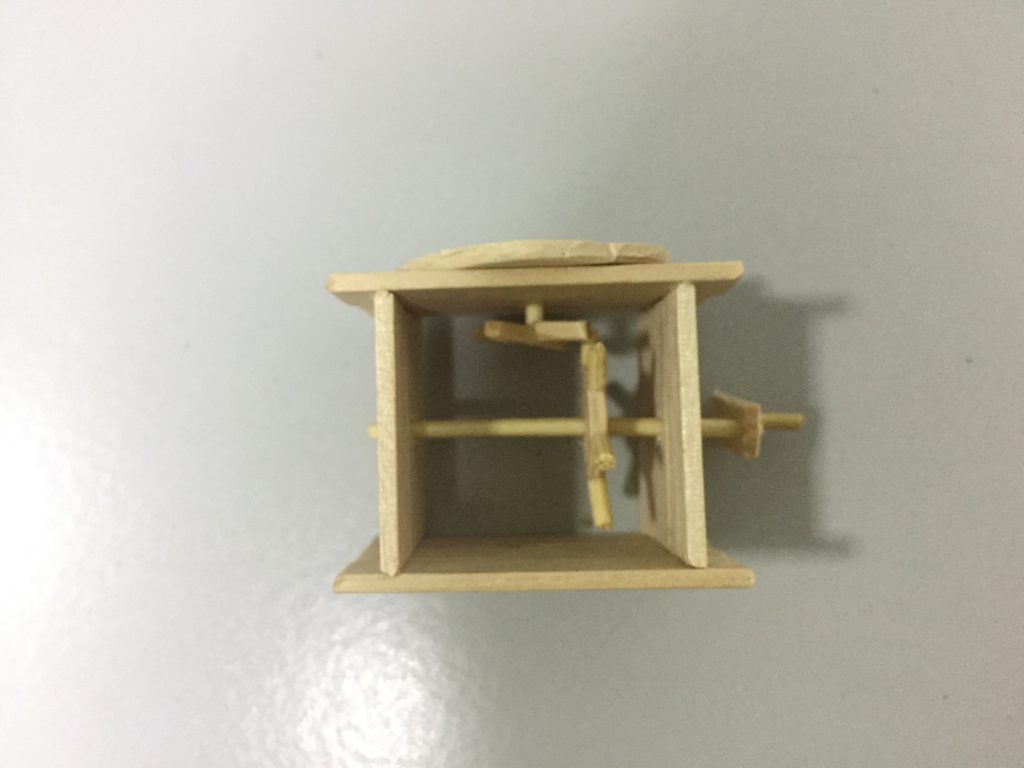 To make the gear, I first cut the wood to the size I want the gear to be. Then, I cut the corners to form an octagon and then into a hexadecagon. Afterwards, I sanded the edges to form a circle. Finally, holes were drilled into the circle so I could cut out the teeth of the gear. 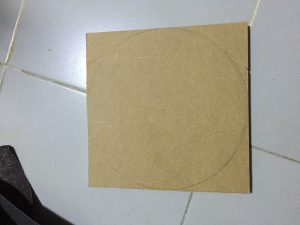 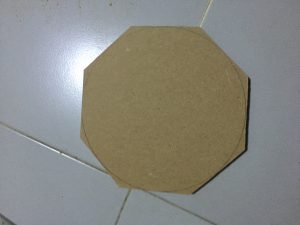 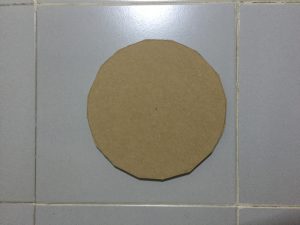 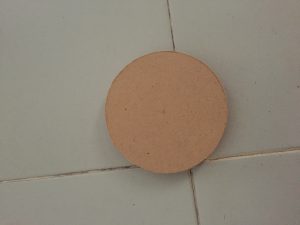 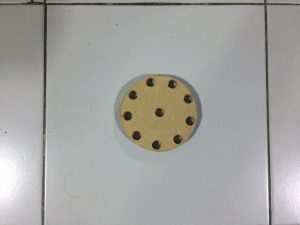 After assembling the model, I realised that the gears weren’t smooth enough so I took them out and sand the teeth of the gears to make them slightly rounder. 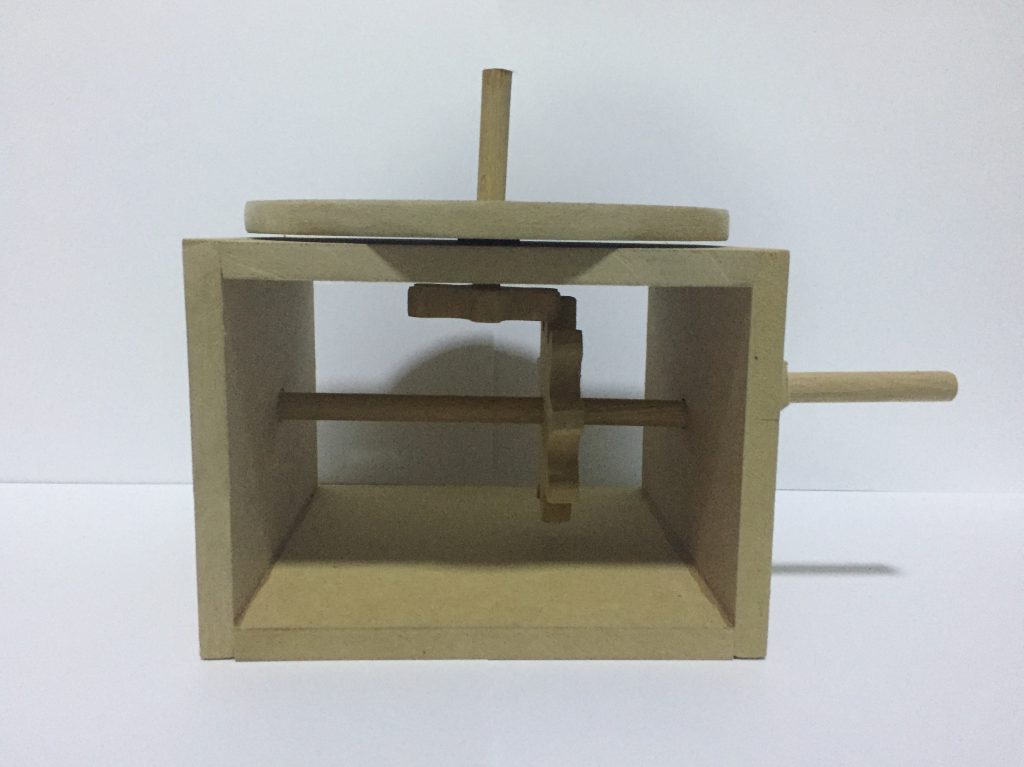 I was told that I could put a natural object on top of mechanical base to show the contrast between the natural and mechanical elements. I did some research and found an artist (Myeongbeom Kim) that uses a mix of natural and man-made materials in his sculptures.

I wanted to add tree branches at the top to make it look like a carousel. I couldn’t find a lot of tree branches so I took it from a plant instead. 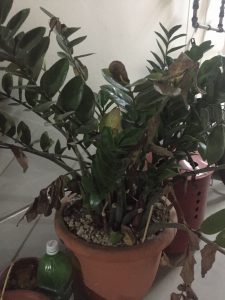 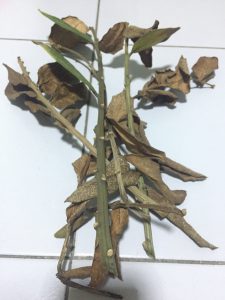 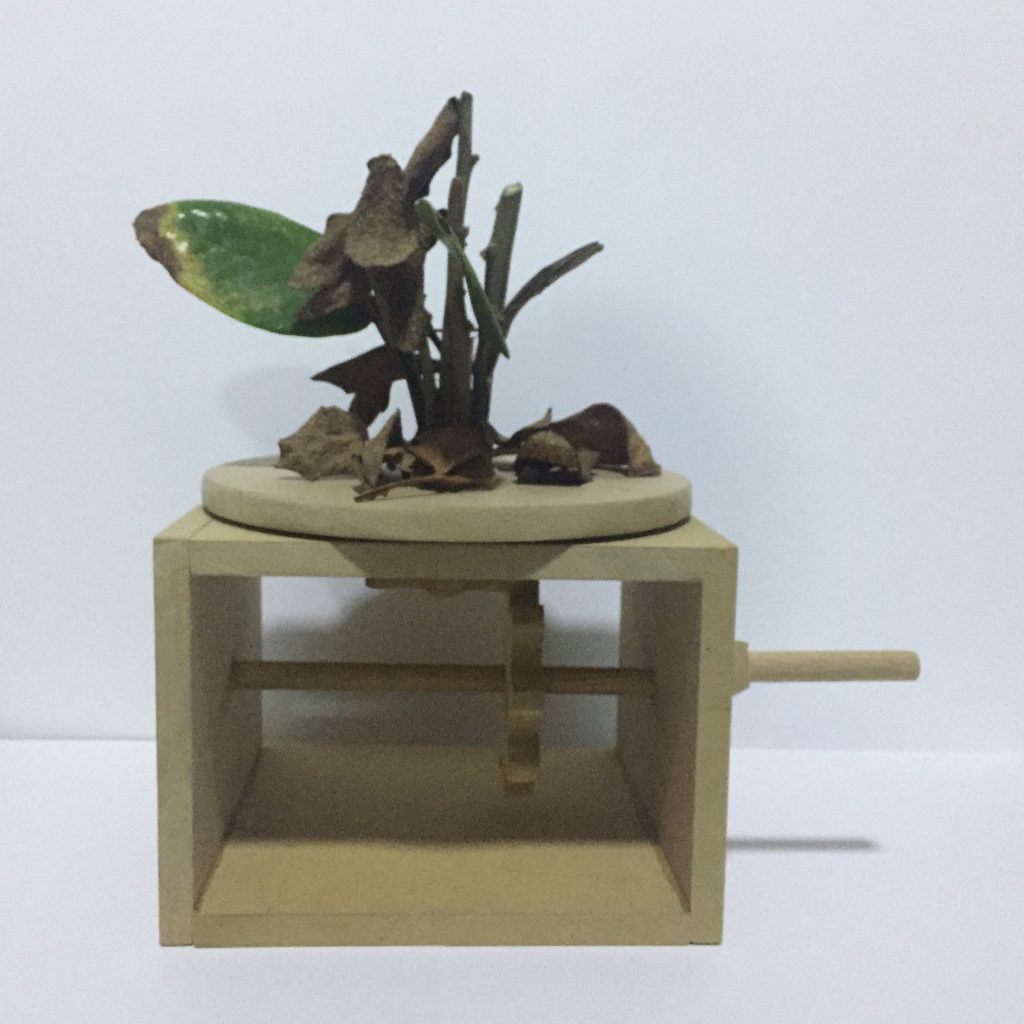 It ended up looking quite interesting but it did not have the impact of the dance so I tried to think of other natural objects that would have the shape of a carousel:

In the end, I decided on a broccoli. I drilled a hole in the broccoli and attached it the the mechanical base. 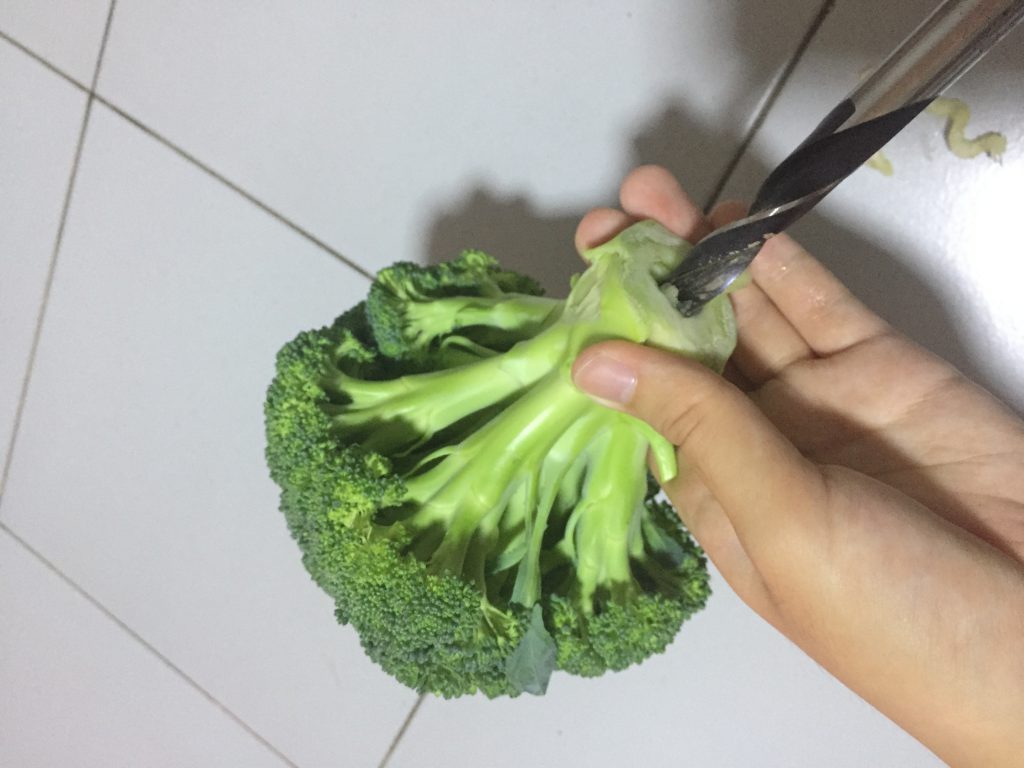 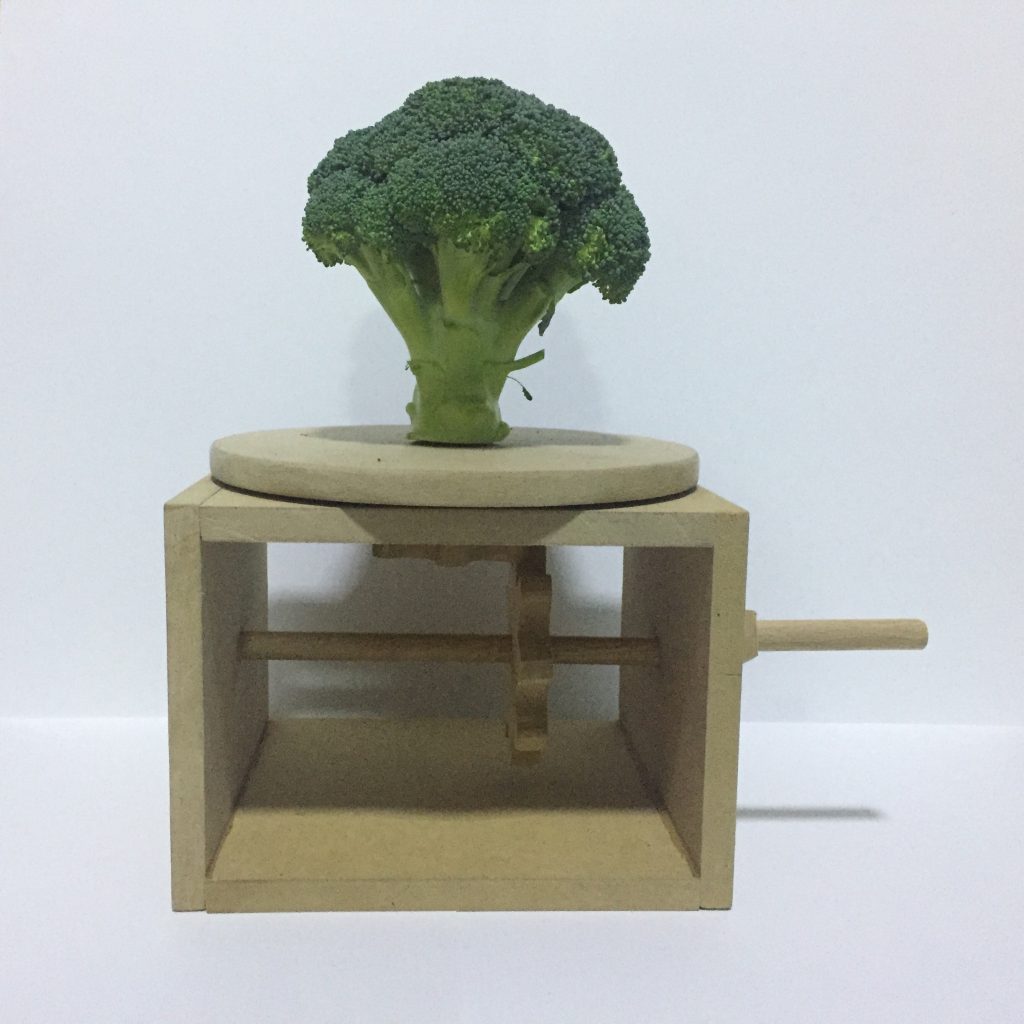