I attended Symposium Day 1 and 2, and it was really quite eye opening. The Art of the Networked Practice Online Symposium was an event, a gathering across the globe that presents the artistic works and technological breakthroughs that incorporates art as a practice. The symposium was completely free and brings people from across the gobe together. Granted, many of us were there because of Experiental Interaction, it was a beautiful act of connection because all of us were there for a specific goal- to share and to learn more about this. The Adobe Connect sessions were extremely informative, and it is the practice of the third space coming to life right in front of me, and people with the same passion sharing their hearts out. Through the two days, the DIWO and third space are very strongly demostrated and communication is talked about a lot- how it has been used in art, and how we can use it as artists.

We have all one subject, in fact, mine is communication and the difficulty to communicate at all.” – Annie Abrahams 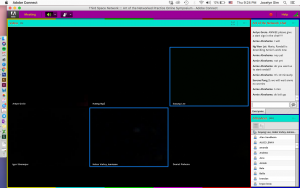 I found this quote particularly interesting. Through the live performance that we witnessed via Adobe Connect, we saw the entire performance play out throughout the different parts of the world and somehow still sync pretty much seamlessly through the whole maybe 30 minutes. The communication was beautiful even before the performance started- we witnessed the performance participants chatting to each other about when to start the performace, and I personally saw how in a sense, there were two ‘worlds’ in the same platform. One on the webcam and sound end, the other world on the chatroom. I believe Annie Abrahams also highlighted this point briefly when she was in the symposium, but seeing the worlds play out separately was interesting, especially when the topic on the chatroom can be completely unrelated to the webcam side, yet it can influence what happens on the webcam as the presenter still have access to the chatroom. Moving on the actual live performance on Day 1, it started off with the blacked out screens on the webcam, and the performers saying different amounts of time at the same time. It was completely random, and we didn’t quite know what happened behind the screen, yet we had an inkling of who was talking based on the blue outline that glows when someone’s microphone was recording some sound. Another part of the performance I found interesting is when the different performers said things like “excellent” and other sentences and phrases that were related to the political climate in their own home country. I loved how this part worked out because there were points in the performance where the performers sounded like they were replying each other, even though it was supposed to be coordinated to sound like that. It was unintentional, yet it added so much character into the work. 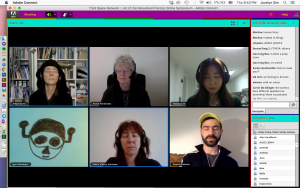 An interesting point to note is that Annie Abrahams later found out after the performance ended, that her microphone was wonky and may not have contributed to the work as much as she wanted, but she just went with it. Perhaps this was the glitch that we speak of, and how the glitch may actually shape the performance work to an unexpected way, but it wasn’t necessarily treated as a mistake. The glitch was great. 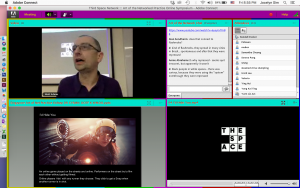 The second day was interesting, with Matt Adams. He shared about Blast Theory and some of the works that they have been doing. One of the works that caught my attention is I’d Hide You (2012). The work is a relatively simple concept- it was designed like a game, so the runners try to capture the other players on their camera while trying to be out of sight. As online viewers, you choose which team to be on, and you enjoy the privellege to speak to the players themselves. Somehow, you are also emotionally implicated into the game as you follow the runner and you communicate with them. This would impact the outcome of the performance, whether you try to sabotage or support the runner. This work takes vlogging (video-blogging, usually about their daily lives by Youtubers) to a whole new level, and makes communication with the video makers deviate from the usual. On Youtube, you can upload video and people can comment on it, or you can do live videos where people can immediately respond to. While on live videos viewers can shape the outcome of the video since the people can see the comments live, I’d Hide You makes the viewers emotionally connected to the runners since this is a fast paced live game. The communication to and fro the viewers and runners change the way the game can turn out. The DIWO is strong, as the runners interact with each other and with the viewers.

I am slightly bummed that I missed the last day’s session because I saw friends posting about happenings, but all through the internet I will be able to catch up on it via recording. :’) Overall, the entire symposium contributed to the redefinition of communication and technology in my mind. Technology is no longer just a part of the world but we can really incorporate technology into our lives and in our art, and this motivates me to somehow go into this direction as we continue on in this journey called life. The DIWO concept played so much into this symposium, and this symposium wouldn’t have been possible without the third space and DIWO.

One thought on “Art of Networked Practice Online Symposium: Hyperessay”