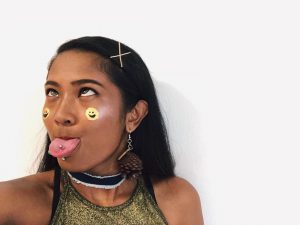 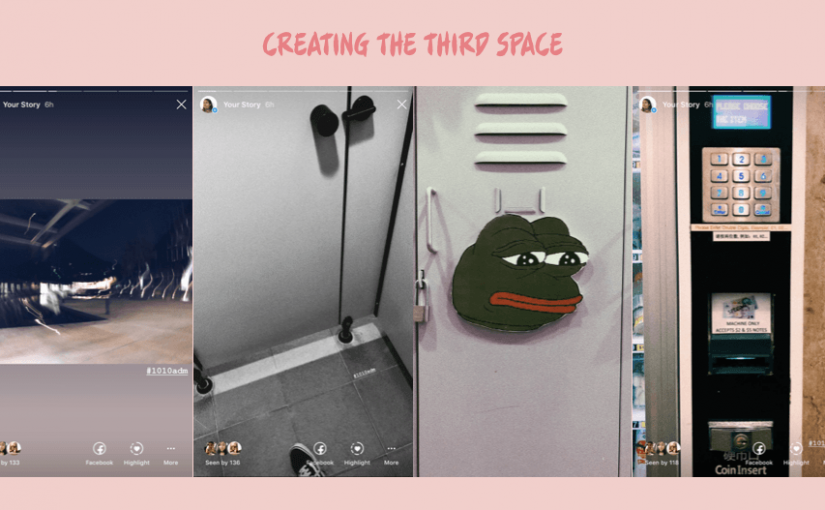 Why did you choose this space or object to photograph? 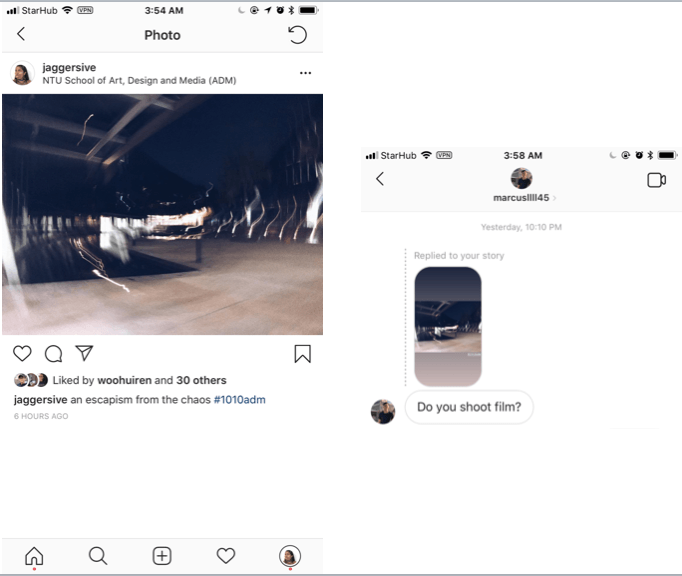 The significance of this location is a place of escapism from the chaos in class. The blur in the photo was accidental but it really depicts how I feel whenever I’m trying to take a breather from the stress and pressure, to relax and calm down. Personally, exiting the school compound during breaks is a temporary relief to reset my stress level back to 20% and building up my motivation to end the day well. 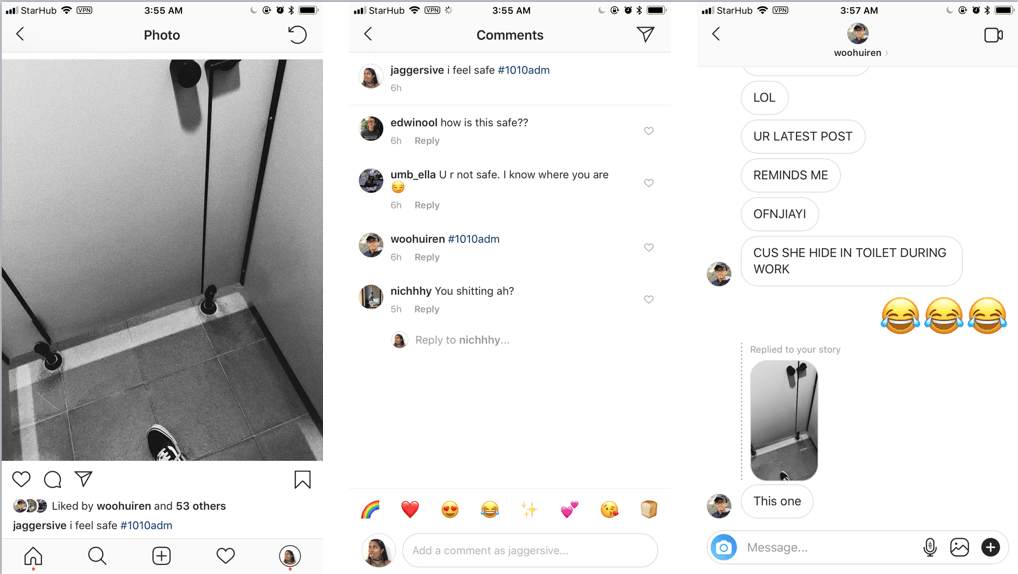 The toilet cubicle has a special significance to me as it’s one of places where I seek refuge to show my vulnerability. It’s a communal place yet private and intimate to me. Despite being constraint in a small space, I feel safe because nobody will be able to look at me. Being guarded by three vertical dividers allows me to let down my guards and be my true self. The interaction from the viewers tells me that different people have different sentiments attached to the space. Some disagreed that it is not a safe place and some got reminded of a memory attached to this space. Hence, factors such as memories, proximity of the space and notions might influence your emotional attachment to the place. 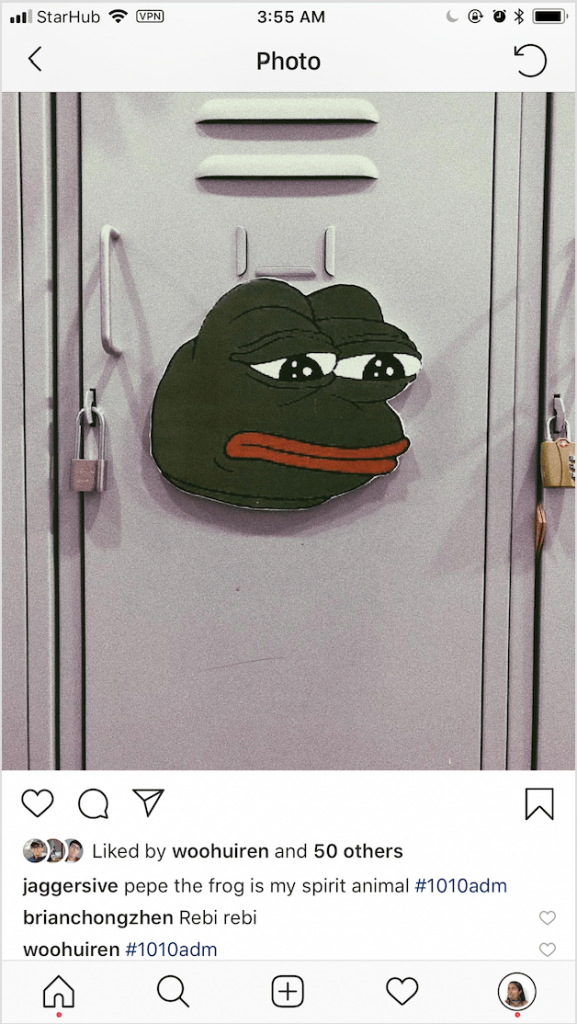 I’ve decided to photograph ‘Pepe the Frog’ poster on a locker because it brings back memories during the finals week in Semester 1. It evokes a sense of familiarity as I recalled the emotions I’ve felt during that period by looking at this expression of the frog. Tired and drained out. The fact that it’s being pasted on a locker that is safeguarded by a lock reminds me of how I have to put away all the unnecessary distractions in life to focus on my school work. Good times… 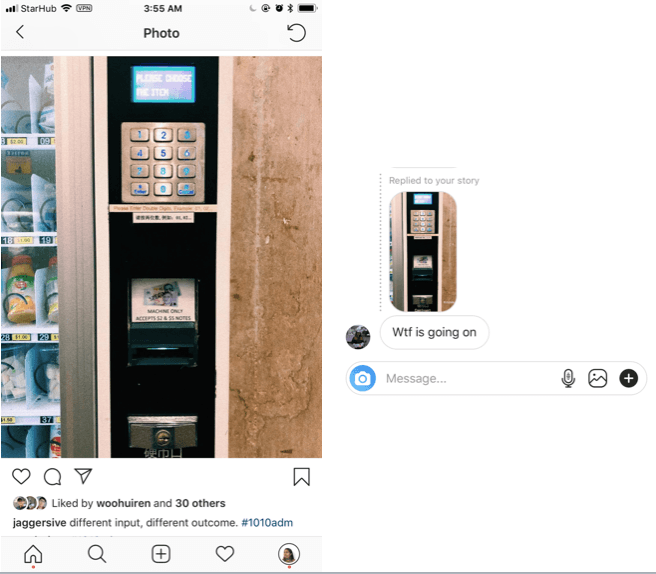 I’ve chosen this photograph focusing mainly on the concept of how a vending machine works. It serves as a reminder to my work ethics and mindset in life. “different input, different outcome” is the caption I’ve chosen because I’ve observed that there’s multiple ways to get our goals and we have the choice to decide how we are going to get to the end point. There’s no right or wrong way, especially, in the design industry. For example, there are coins that will add up to $1.50 to get the orange juice that we want and we can also put more than the amount needed and the machine will return back the change. Reminding me that different situations have different approaches such as ‘Less is More’, ‘Just enough’ or ‘More than what is expected’ to achieve the end goal that we want so, it’s essential to plan. Everyone’s goal is different and the amount of effort we put it varies too. Hence, this is a reminder that I should be grateful to have the freedom to choose what I want to be and make full use of my opportunities.

What are some of the characteristics of this alternative virtual space you had created collectively?

Under what circumstance will this alternative virtual space change?

It will change in terms of the value whenever there’s new content being posted by the participants contributing to #1010adm platform. The interaction of the viewers with the post will change the space with their comments, being able to relate with the post based on their sentiments or experience of the shared space and the popularity of the post considering the amount of people who will be able to view it due to the creator’s following and influence on the platform. Hence, despite the platform being on a limitless and vast virtual space, there will be changes and added value due to the interactivity of this platform until there’s no more viewers or participants going to the #1010adm platform.

As #1010adm is a virtual space being hosted on Instagram, there will be changes if the hashtag or certain content is being removed due to violating the guidelines of the platform.

How does this project relate to what we discussed in the lecture regarding co-creation. In the concept of Do-It-Yourself (DIY), Do-It-With-Others (DIWO)? 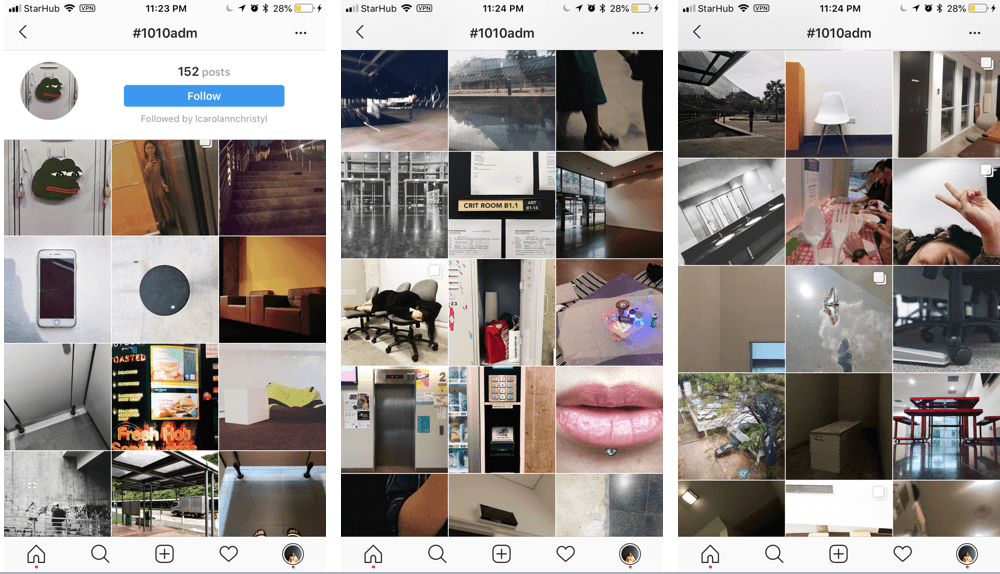 Despite doing the in-class assignment alone (DIY), the #1010adm project focuses on collaborative art which brings content from different creators onto the same platform instantaneously (DIWO). This project is a different approach of (DIWO) collaboration on a social media platform without having to communicate physically with one another but we are interconnected virtually. Being able to engage people to view the content under the same virtual platform and it brings exposure as a collective. It showcase a variety of works and viewers can find something that they can relate to or express their agreement or disagreement. This project relates to DIWO and co-creation because without a platform to gather all these content and interaction, all these thoughts and works are kept to oneself and it wouldn’t be as dynamic as a combination of each creator’s individuality and style which adds value to the whole collaborative project.

Similarly to Yoko Ono, Cutpiece (1964), The interactivity between Yoko Ono, participants and the viewers will lead to the end product of the whole performance art (DIWO). Factors such as the reaction from the viewers, participant’s decision to cut the amount of cloth from Yoko Ono’s clothing and her tolerance towards the whole performance art as she has a choice to stop or continue, will affect the whole end product. Thus, the outcome is unpredictable and ever-changing.