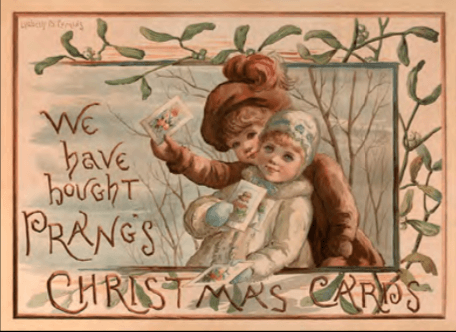 Chromolithography is known as a colored picture printed by lithography, especially in the late 19th and early 20th centuries. It is a unique method to create multi-colored prints.

It is a chemical process based on the rejection of grease by water.

For this reflection, what caught my attention was Louis Prang & Company who is known as the “Father of the American Christmas Cards” in 1873 for the British market. Louis Prang is a famous Boston lithographer who popularised commercially printed holiday greeting cards using chromolithography after being exposed to the first Christmas greeting card created by Sir Henry Cole which caused a sensation in the Victorian era.

He incorporates chromolithography into this design process as an artist has more freedom for expression. They are able to create whatever shape or letterform they want for their design and they are not restricted to the structured and restrictive process of using a standardized typeface using metal or woodblock printing.

Louis Prang & Company became the first printers to commercially print holiday greeting cards that are readily available to the public in the American market after producing the collectible albums cards for the British market in 1873.

The venture to the American market was successful as his company was printing up to 5 million Christmas cards per year. His products ranged from simple to lavishly decorated greeting cards embellished with fringe, tassels, and sprinkles printed on high-quality paper.

In addition, he’s a man ahead of time during that period as he is one of the active supporters of women artists. During that period of time, women’s occupations were limited to low-paying domestic services. He created an art contest and advertised it through the women’s rights journal Revolution in collaboration with the Ladies’ Art Association. The winner of the contest gets to state a prize for their artwork and Louis Prang will buy it. The fact that he did this when the society that period of time was male-dominated is forward-looking and revolutionary. In 1881, Louis Prang & Company employed more than 100 women as designers, artists, finishers, and embellishers to find new designs and keeping up with the trend.

Another contribution of Louis Prang is the Prang Educational Company and the Prang Normal Art School. He was one of the driving forces behind providing public-school students with an art education with the knowledge and resources he has by creating art instructions in schools and publishing books.