As previously mentioned; despite being primitive, smell is subjective, personal and under developed in human beings.

The presence and absence of odor cannot be compromised, you either smell it or you don’t. Though the tolerance of the strength of smell is adapted through the cultural capital of the individual, one cannot reject smell (sans hyposmia and anosmia people).

We justified our main aim in utilizing sense of smell as an installation that is idealized to emit through dependence on the very people that interact with it.

We looked upon more research to give ourselves a better understanding into the uncharted territory of smell.

Mystery of the Sense [Smell]

The video listed above talks about smell in  pertinence to the human body. One interesting perspective from the video is the human race’s tendency to “shy away from the person’s scent (natural odor); yet creating odors to lure someone special (perfumes)”.

The video also explains the biological sequence of how smell is collected and triggered through the olfactory bulb within the system of a being.

Perhaps due to the date filmed (1995), many interpretations were rather biased, but the video still provided us necessary information of how the sense of smell can be described.

SENSE OF SMELL is an international co-creation and research project. The ideas of smell is being interpreted more artistically and more emotionally.

Through really artistic works, Smell is re-represented and re-interpreted in various artistic directions such as installations, artistic exhibitions and products.

This article is shared to us by Ker Siang (thanks professor!). The article follows Sissel Tolaas who was behind controversial art experiences such as recreating the sick smells of World War I.

One particular quote that caught our attention by Sissel from the article is:

“Every nano-part of this planet emits a smell – there is no such thing as a ‘clear’ smell,” Tolaas says. But the world is full of false smells, which mask the true, natural odours that we deem to be repulsive. “We live in a world that sanitises, deodorises, masks. Certain smells need to be there, but … reality is covered up on so many levels – so many commercial products cover up what is really out there and mask it.”

All in all, the researches done were to give us more impetus in tackling the subject matter of smell. We looked at both the scientific and artistic notion of smell. Through these, we have more inspirations for our deliverable.

Ideals of the Poignant 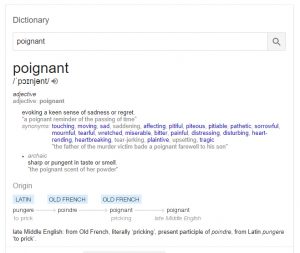 ‘Poignant’ defines both a pungent stench, as well as the arousement of strong mental sensation.

We feel for the word as it expresses similar direction in  which we are projecting towards our outcome.

We want our outcome to evoke a emotion through the scent collected to the people of NTU. 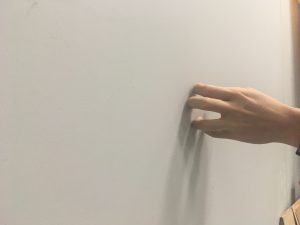 To justify the fundamental of smell as primitive form, our subjects has to create a notion of intuitiveness in interacting with our outcome, therefore our idea lies in utilizing the capture of scent through the human notion of  tactile trajectory.

in pursuit of happiness. View all posts by Heng Tong Foo