A coherent flow in the photographs’ layout and composition are paramount to a good photo zine! It was tempting to use all the photos I took to showcase all of Changi Village. However, I decided that in this case, less would be more! I wanted to be more specific with the ideas I was sharing instead of confusing my reader with weak photos.

In essence, my selected pictures reflect what Changi Village would be to me when I reminisced about it in the future. An Old Fishing Village, that is separated into two key parts, the village and the sea.

To facilitate the risograph effect as much as possible, I also printed my zine on an off-white/creme textured paper (The Natural 110GSM) that I found at Fancy Papers. I must say, a simple yet incredibly crucial step to take as the quality of prints are really affected by the type of paper used! 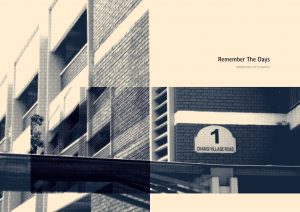 There are two spreads in the zine that are (in a way) considered full spreads, the cover page and the center spread. Bearing in mind that the cover page is meant to introduce the style of the zine, I went full out “self-expression” in this one as it was difficult to find any good looking ‘photo album covers’ online.
I super-imposed the same image over itself so that even when the zine is folded, the viewer would know that the back cover was linked to the front and vice-versa; making use of the full spread capability of the cover page. As much as the picture introduces the style, the iconic landmark (HDB Flats) in the image is also the first thing that introduces itself to you upon entering the Village. 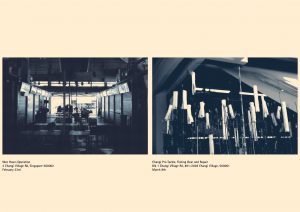 The 2nd spread showcases prominent village aspects such as the communal hawker centre and the most famous fishing appliance shop in Changi Village. 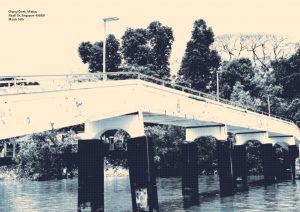 Displaying Changi Village’s most iconic feature, the single-walk way bridge. The bridge, in reality, links the village area to the sea aspects of Changi Village; Changi Beach Park and Fishing Zones. In my zine, I have exploited and made full use of the centre spread. Not only do you get a full detailed view of the bridge, but it also acts as a visual bridge. This spread not only connects the village photographs to those taken at the sea, but acts as a strategic transition to enhance the readability of the zine. The composition of this photo is well balanced; with dark and light spots. This spread, therefore, acts as a transition to move from much darker compositions in spread 2 to much lighter ones in spread 3. Overall I felt I made good use of this space despite it only being one image. Prominent sea aspects of Changi and… hang on… is that… me!?

All in all, the entire zine is designed and laid out to replicate an old photo album. Photo composition, the crop of the photos, and even the way I had to position myself in the last photo is designed, to make you think these images are taken from the past. To further add ambiguity, the chosen colour to add a sad melancholic feeling and a date stamp is added but without its year.
The design is meant to invoke in the viewers’ reminiscence and nostalgia which is more than just about remembering the past. It is an emotive response that makes a person want to go back and to relive these lost memories. As the reader comes to the end of the zine, an epiphany is presented! The last photo which on first glance looks normal…? But upon a closer look, the ominous figure is strangely familiar; yes it is me! The epiphany is a resolution to the reader; explaining how all these photos that you were just looking at are not old but are in fact taken just last week. The beautiful recollection you experienced earlier is still beautifully there! 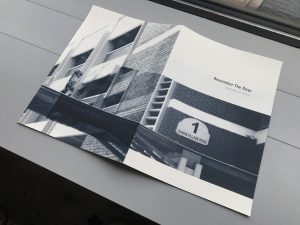 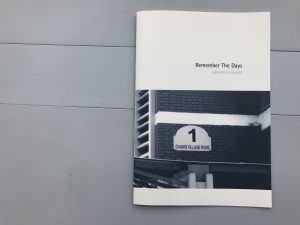 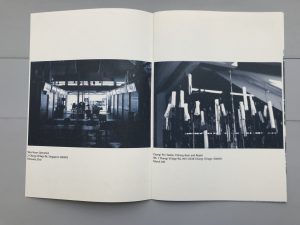 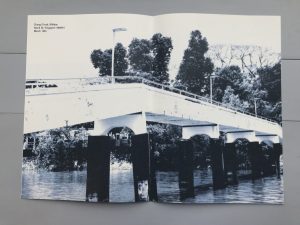 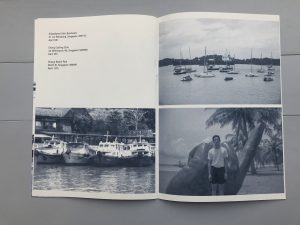 Not gonna lie, I struggled quite a bit for this assignment. It’s one thing to understand and visualize a concept but it’s another to construct and form it. Only after being certain about my concept and tying it tightly with my design style was I able to create something that others could understand. I went back to the drawing board a couple of times for this one, but thankfully it was all worth it! I must say I still enjoyed doing it! I have learnt a lot from this project and the process, albeit excruciating, has kindled a new-found passion and interest in the topic!!