Broadcasted over the span of three different days, I managed to attend the first and last day of the online symposium. While the performances on both days were rather different, both portrayed the theme of “Social broadcasting: an unfinished communications revolution”. On the first day, we started the symposium of with a lecture by keynote speaker Maria Chatzichristodoulou. Her discussion about how technology has been used extensively for interaction, supported with some examples that we have discussed in class, demonstrated qualities of D.I.W.O and social networking. Emphasis on how present technology is in our daily life reinforces the point of defining physical spaces and boundaries to bring people together.

Maria mentioned that “live performances carry ideology”, which I thought was very fitting with the performances that took place throughout the symposium. Unlike pre-recorded videos of performances, the live aspect of current performances allows the story/purpose to flow in its own way. If something does not go the way it was planned to, it becomes part of the experience, hence carrying and developing ideology. Movements within live performances also produce actions which challenge the definition of physical art making it an interactive experience.

Comparing the performances from both days, I would say that the difference between one-to-many and many-to-many form was rather evident as an audience. Although the Online En-semble – Entanglement Training (first performance) involved multiple performers, the experience itself felt like a one-to-many form since the performing platform was the third space. We were watching different aspects of the performance coming together from various screens, in which they actually used broadcasting as a method to perform. In comparison to the Igaies aka glitch performance on the third day, they used the third space as more of a streaming platform rather than a performance ‘stage’. This meant that there were times when I felt a little more disconnected to the performance as an audience due to the restriction of camera angles, etc… 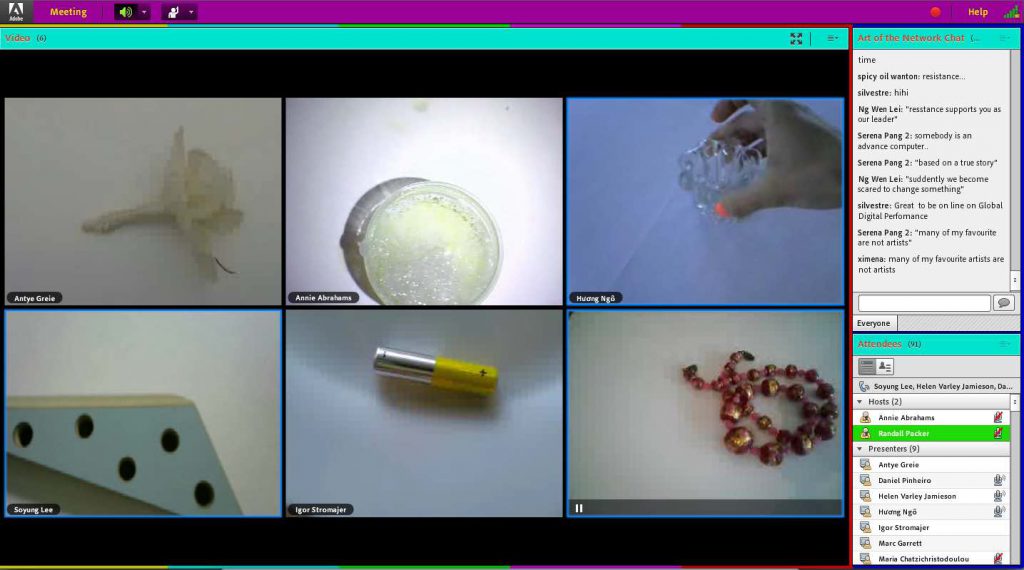 Diving deeper into the content of these performances itself, the Online En-semble incorporated qualities of breaking boundaries of physical space. It was a performance that linked auditory as well as visual senses together strongly with the counting down of latencies, humming, and the close-up filming of objects. It was a rather immersive experience which I really enjoyed; especially upon understanding that the performers were all in different countries, some of which were new collaborators with Annie Abrahams. They also mentioned that there was a professional music performer within them who helped to guide them with the flow of sounds. Abrahams also asked her collaborators to choose political statements to say because it is a time when politics is preoccupying her mind which is very suiting to current society. The spontaneity within the performance creates a sort of harmony within itself.

The Igaies performance on the third day held a lot more of a dystopian theme in comparison to day one’s performance. The hashtag performance involving XXXTRAPRINCESS’ was one that I wish I understood more of, especially the purpose and reasoning behind the setting up of them sitting back to back. However, I thought that their use of filters was very fitting for an audience of our generation. The performances were held in a more traditional performance space which demonstrated an abjection of the space. Along with the leech and sexual puppy performance, the idea of having an online identity (aka acting) was prompted. All the performers were immersed in their own characters and as a whole, they created a sci-fi quality to the this ‘procedure’/experiment.

Throughout both days, there was definitely a presence of glitches produced by various technological difficulty. The fact that we were watching from various time zones adds to a glitch in the experience of all audiences and performers. The online symposium was definitely a good way to end of the sem as it holds a lot of resemblance to our topics of discussion and micro-projects.