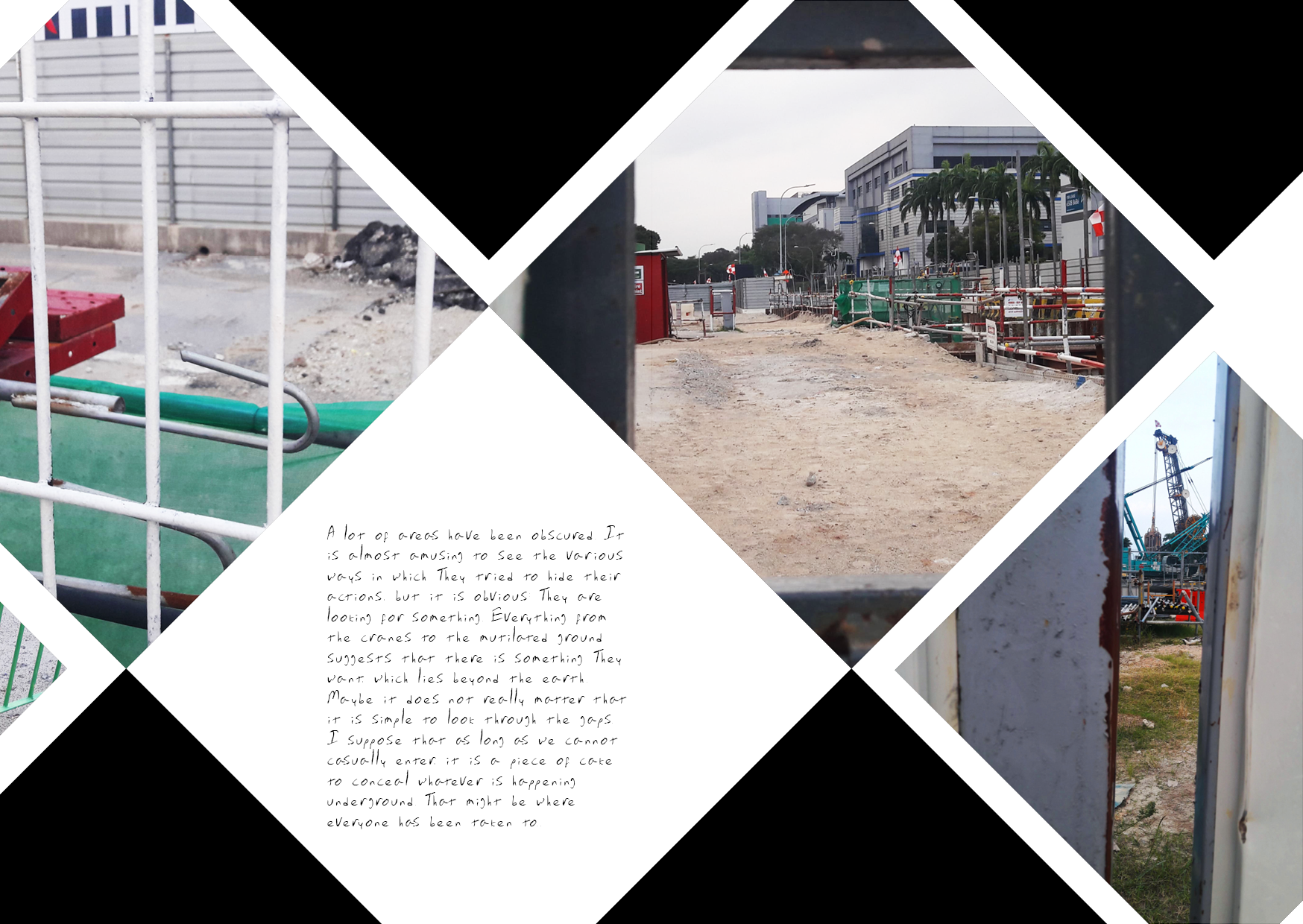 On the last episode, we investigated a government coverup in a place where everyone had disappeared. This episode, we draft up a report for higher management, with extremely consistent assistance from Shirley.

… Or so was the underlying idea. Upon beginning the creative process for the zine, I contemplated 2 directions in which it could go:

Eventually, though, I settled for the conspiracy report, considering that it would be more aligned to Part A, and that I had a clearer idea of how it would look.

Eventually, I settled on the journalistic report, owing to more flexibility in terms of more dynamic compositions.

First, I established the flow of the zine through determining the content. At this point I had yet to decide whether to have broader or deeper content, and thus went for broadness first, assigning each 2-page spread (folio?) a specific content. The flow would then be as followed: 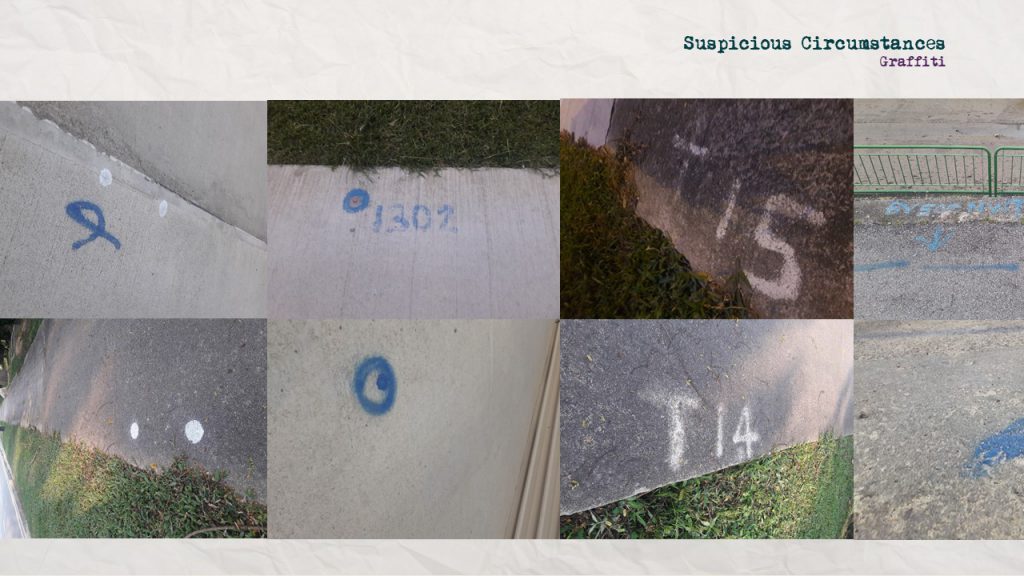 For the first draft, I designed based around the many photographs I had, opting not to use many hand-drawn elements to emphasise the notion of “quickly taking notes” with photography than sketches. The second draft onwards mostly includes minor edits to make it look more realistic, as well as complete upheavals of design for certain pages.

For the front and back cover, I was uncertain of what to do, and thus tried to think of it in terms of associated images. Thus, I considered the character 目, for the following reasons:

Thus, I shelved that character. After settling on the conspiracy report idea, I decided to go for a certain look, that of the brown case file folder.

For some reason, the above designs instantly evoke an idea of the report, and thus I made sure to include key defining elements.

In this page, I was uncertain what to do, and thus opted to focus on creating suitable spaces for text through proper positioning of images. Consequently, I tried to have balance by putting the images diagonally opposite such that it wouldn’t be too image-heavy on any particular side. To incorporate the element of haphazardly pasting photographs in, I skewed the images as well. The images still appeared extremely unreal due to its flatness. Thus, I printed it out and slightly marred the papers by crumpling and folding them. For some, I tore the images slightly, or made a dog ear. Then, I scanned them back in.

In this page, I considered a grid system, which would resemble the bars of a chain-link fence. At the same time, this would be helpful in limiting the amount of text while providing many spaces for images.

Shirley had no comments for this, and thus I went ahead with it.

While I was concerned about the colours in this page, Shirley assuaged my doubts in pointing out a seemingly high level of green, accented by subtle reds, and the brown corkboard. I decided that it was important to try changing the text colour, regardless.

In lacking a substantial design idea, I followed the first spread’s idea of haphazardly putting images to reduce space. I considered the use of negative space, where I would have a scatter brush of graffiti as the border, leaving negative space as the text box. 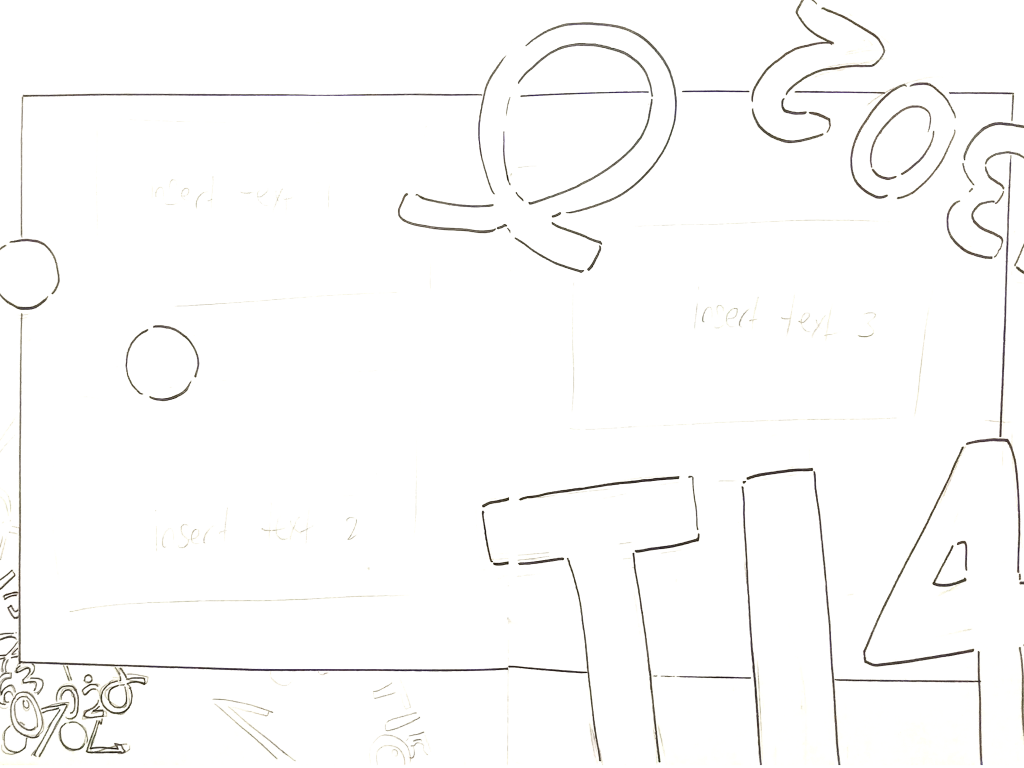 Shirley had no comments for this specific page, but in line with her comments on colour, I figured to actively consider the colours on this page. The graffiti I have only comes in white and blue, and the concrete is grey.

I was uncertain as to what to do with the back, considering that there is typically nothing on the back of a report. Using my imagination, then, I figured that it was not improbable that one might put additional notes on the back, to be read after reading the report. As such, I attempted that.

Some of the more common comments:

All in all, it’s amazing how many issues seem so obvious in hindsight, but went completely undetected by me. To me, the most interesting part was that of trying to “collage” successfully: unlike illustrations, it’s difficult to control the proportions, perspective, colours. This made it somewhat difficult to me, in that I had to find ways to make the images work in my favour. While I picked by gut feeling, it seems that somehow my instincts managed to choose images with consistent colour palettes, surprisingly, which made things slightly easier. 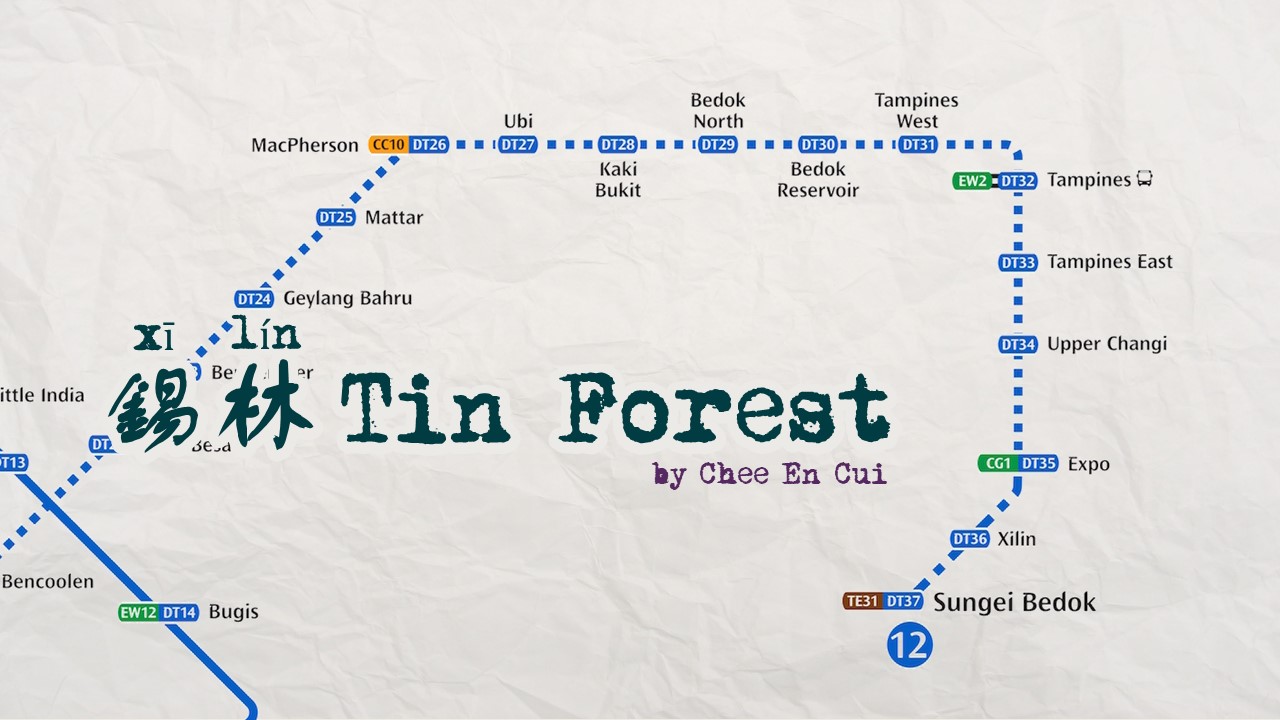 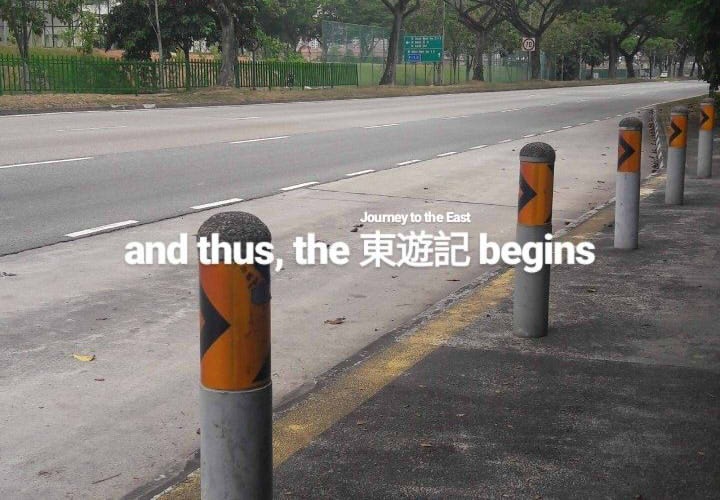 “If you’re going to go somewhere, might as well go all the way,” I said to myself, and that’s how I found myself wishing I hadn’t had the superb idea of riding the entire Downtown Line and beyond.

In all seriousness, though, the East is probably the most unknown to me, in that I have literally never been there apart from Changi, simply because I have never had any need to go there. Thus, I decided to look at the MRT map and find a nice sounding Eastern place to go to. Preferably, one I’ve never even heard of, because why not?

My first impressions on the way there from Expo was that it was a quiet area. Sure, there were a decent number of people at the bus stop, a mall, and the Expo to boot, but even the roads were almost eerily silent. That, and the general ability to see the sky clearly: many places tend to have tall buildings which obscure the skyline, but here, there was so little going on that it was somewhat easy on the eyes, having so few elements. The further I walked, the less populated the roads became. Awkwardly enough, this was pretty much the same on my second trip (in all fairness, both days were Saturdays).

As it turns out, Xilin is a somewhat significant road, and as such traffic exists, even if at a constantly low rate. While the roads may have had cars, though, the sidewalks were empty save for me. My guess is that the absence of people also had to do with the time of the day and the time of the year: as far as I could tell, Xilin was an industrial area, what with the many company-based buildings and general lack of HDBs. In fact, I don’t even think anyone was working, considering the lack of industrial sound, the lack of people leaving the buildings to go home, and the fact that it was a Saturday and the 2nd day of Lunar New Year to boot.

PLEASE NOTE THAT quite a few of my photos and videos have been deleted as they involve the train depot, which, as it turns out, is a restricted area (I was hunted down by security).

I took a lot of photos, but for convenience’s sake, I’ve grouped them not by chronology, but by visual/thematic similarities. To avoid information overload, I’ve refrained from posting all pictures pertaining to said category. (This is the semblance of process part, where I mostly chose to photograph things on a whim, and later tried to determine why I had felt the urge to.)

(that’s the train depot) All in all there really isn’t any sound but that of the strong wind, passing cars, the occasional train, and the occasional bird.

All in all, I have mixed feelings about the place. There is little sound but the wind, rushing cars and occasional bird, but it’s not really a peaceful quietness, not even melancholic or eerie. Instead, it’s more like silence, sterile and stagnant, devoid of people, of scent, anything. Indeed, it might be refreshing compared to the bustle of a shopping mall, but it lacks organic serenity, which leaves me feeling somewhat disoriented. There is a difference between solitariness and desolation, after all.

Xilin, in fact, reminds me strongly of various other industrial areas, such as Senoko Way or Joo Koon Road, just much less populated in that there doesn’t appear to be any of the usual local coffee shops to cater to workers. Additionally, it is surprisingly close to a reknown location, the Singapore Expo, and the Changi City Point shopping mall. In itself, though, the only differentiating quality is perhaps just that there is the Changi train depot.

In the end, though, it’s a place which can easily become rumour fodder, due to its low profile and desolation. It has the makings of a post-apocalyptic location, not unlike the feeling you might get when you come out of a shelter to find that the world has ended.

It also has potential to sound exactly like the site of a government conspiracy, where a lot is covered up, or can be viewed with suspicion. Perhaps my zine would be a thesis for a conspiracy, or a documentation of the end of the humanity.