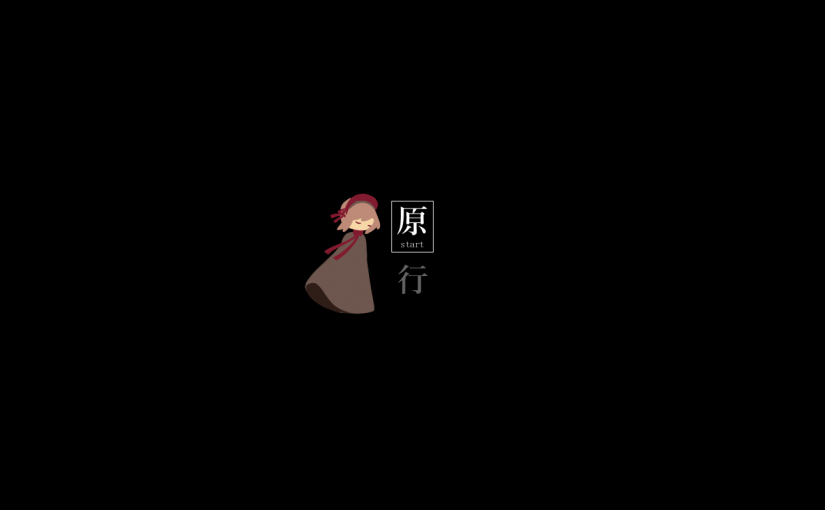 In Chinese, these two characters mean “origin” and “travel”. In Japanese, it can be read as “genkou”, not unlike the Japanese term for manuscript paper.

Though intentionally left vague, it is meant to embody a sense of undertaking a journey towards the beginning. The violin of the leifmotif, Journey, pushing the song ever forward; the full stop soaring towards the direction from which one begins writing. Surely, the circle of a true ending would break out of the grid, break free of order and structure.

The original idea was as follows:

This was a fairly doable project, where it required quite standard systems: generation, movement, collision, reset and end processes. There were also fairly few necessary elements: the player, the damages and the stage.

What I did not realise was that I have 1) no prior experience with programming, 2) an affinity for making extremely solid base systems, and 3) an affinity for catering to game quality of life systems. As a result,

If we assume quality playability, key issues which would have to be resolved are as follows:

Possible expansions would include the following:

Certainly, though, I’ve learnt that I do have glaringly obvious strengths and weaknesses. That I have good awareness of where and why problems could possibly occur (though whether or not I can deduce the solution is another matter), that I have sufficient sensibilities to include easily-overlooked elements which greatly improve gameplay experience, but that I lack awareness of how to create engaging and effective gameplay. That I am good at recognising what is “additional” and knowing what kind of temporary concessions to put to make it seem complete even when incomplete, but that I am lacking in allowing it to remain incomplete, such that it’s difficult to do anything too extensive.

There’s also the fact that programming goes far beyond just games played with computer inputs, which I felt I didn’t consciously realise, like Brendan’s webcam filter program, or Joey’s music visualiser. I’m not sure if I will venture into such areas, since I feel like I haven’t adequately explored game programming (e.g. meta game, animation for visuals, interaction with various kinds of unique objects). It was a good realisation, nevertheless.