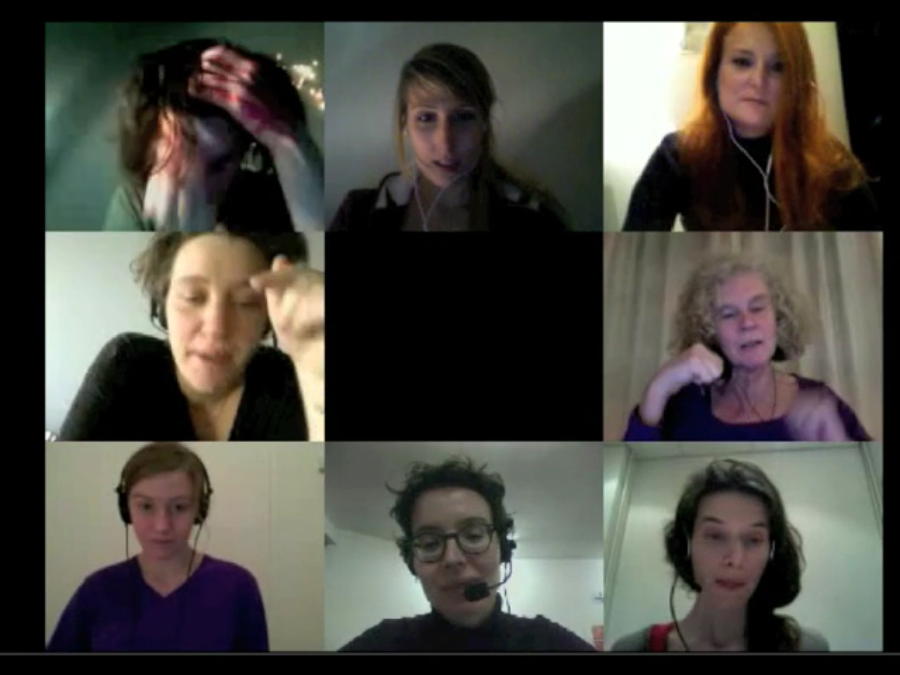 Despite pursuing a career in art, Annie Abrahams’ training as a biologist shines through, where she engages “in research and reflection as an integral part of (her) practice” (Jamieson, 2008). Angry Women, in true scientific fashion, thus features a combination of a controlled space, controlled directives, and variable test subjects, with the objective of observing the nature of communication and collaboration through online means.

It is intriguing that various iterations of Angry Women exist, with varying results based on the varying groups of people: there is an uncanny resemblance to scientific observation, in which a variable is changed, and the data is analysed to explain why the change in variable effects a change in result. In fact, this is often because of the ambiguity of said “directive”, where the style of communication can change easily from narcissistic, to back and forth, to simultaneous.

[in the first take] although we were together, we were not
together so to speak, and still there was interaction between us.
The second time there was interaction and communication but especially in the beginning
everyone focused in tremendous different ways.
The subject became “communication” more than being angry.
And in the end it went towards talking about the subject of our anger, for instance in politics.
That again is a totally different approach.

Nevertheless, all the iterations still have some level of “collaboration and group-dynamics”. As aptly summarised by Abrahams (2011), it situates “a condition of lonely togetherness, of life constructing a commonality, of being together and sharing this condition of co-responsibility, of scripted auto-organisation”. Sometimes there is the lone voice who suddenly screams by herself, to which others automatically join in (00:18). Sometimes there is the one who asks for some time/space to do a solo, only to be completely ignored (Take 1).

Sometimes, it is “a moment of nakedness within the performance” (Abrahams, 2010), leaving the participants vulnerable enough to observe what is true, than the image one might typically put up when broadcasting. The unpredictability of human behaviour is eerily similar to the unpredictability of the third space. As Packer states, “rather than fighting the glitches, errors and disruptions… she discovers the work through these networked ‘entanglements'”. Abrahams capitalises on technical difficulties, just as she does with what may be perceived as “mistakes” by the participants, like the “silent presence of the woman in pink” (Ruhsam, 2012).

This rawness of organic behaviour becomes “a beautiful moment” (Chatzichristodolou, 2010), one more beautiful than a curated act.