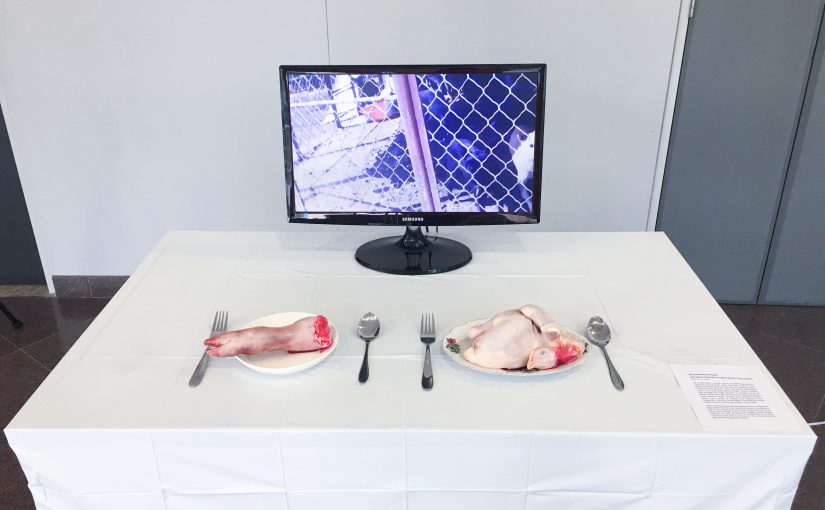 “All Animals Are Equal, But Some Animals Are More Equal Than Others” is an installation that talks about the double-standards of individuals who take pity on the killings of domesticated animals, yet still feel fine consuming meat like beef, pork and poultry. It serves to evoke the disgust of the killings of animals, regardless of it being domesticated animals or farm animals. Many individuals feel the disgust of the population in China’s annual Yulin festival, in which thousands of dogs and cats are murdered and eaten, using terms like ‘cruel’, ‘revolting’ and ‘condemn’. It is a wake up call and also a reminder to everyone that these animal slaughters are the result of the what we demand on our plates.

As quoted from an article found in The Independent written by Emma Henderson, the People for the Ethical Treatment of Animals (PETA) Director Mimi Bekhechi mentions “Whether a dog, a pig, a chicken or a fish, no animal wants to suffer and die for our plates, and we urge everyone to condemn the slaughter of animals for meat.” My message to the audience is that if they prefer to keep their omnivore diet, they should empathize all animals equally; all killings are equally brutal.

As I was browsing through social media, I came across different articles about the killings of domestic pets and the petition to stop Yulin’s Dog Eating Festival. I find it irritating to see that people are bothered by these sins but not remorseful for eating meat in their daily life. I wanted to bring up this irony back in their faces. Perhaps it has never crossed their mind on how the meat are being processed, thus, serves as a motivation for my installation.

It was challenging to portray the idea of double standards as there are many different opinions from everyone. There was a mixture of brutal animal killings and double standards, they are of different topics, hence I have to figure out the delivery method to bring out my message. I intended to show video footages of animal slaughters and gory silicone animal figurines on a table. However, the silicone animal figurines may seem too plain and unrealistic. Hence, Bridgel recommended me to present it with raw meat.

I experimented with silicone casting on animal figurines, but the proportion of the ingredients didn’t work out. 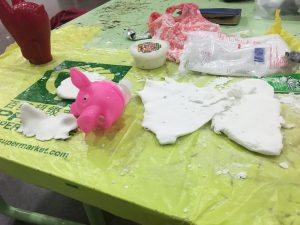 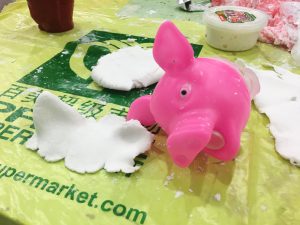 Thus I tried to paint over the animal figurines as it retains the texture. 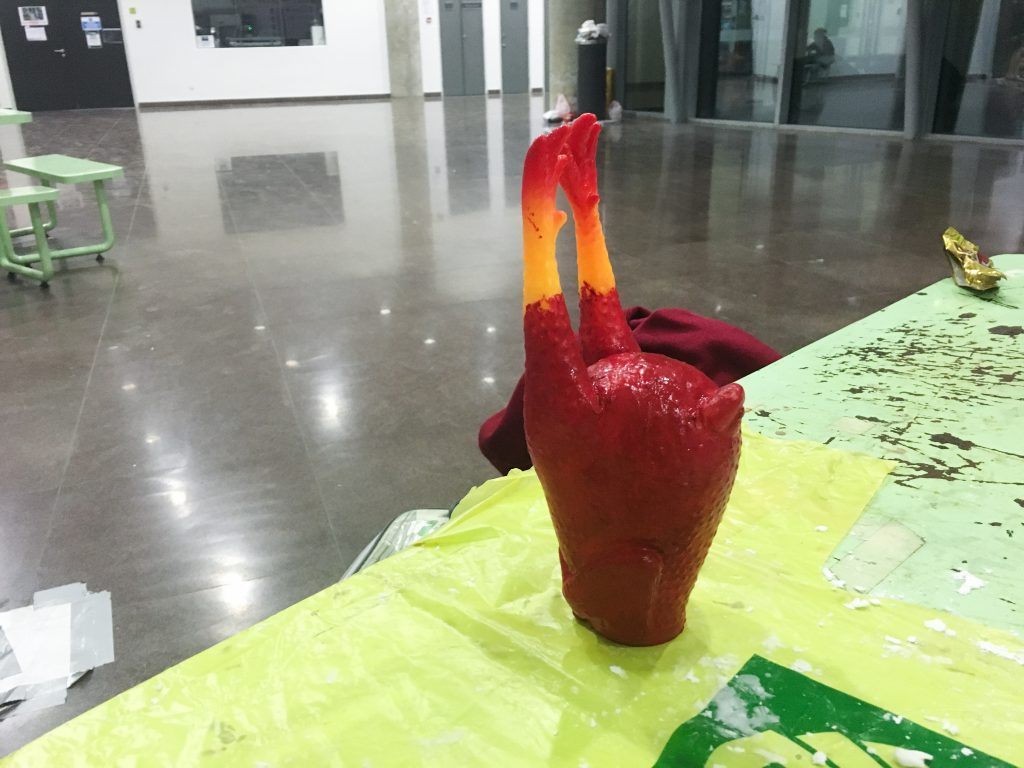 However, it doesn’t present the gory appearance I wanted. Thus, I went to the wet market to find raw meat. 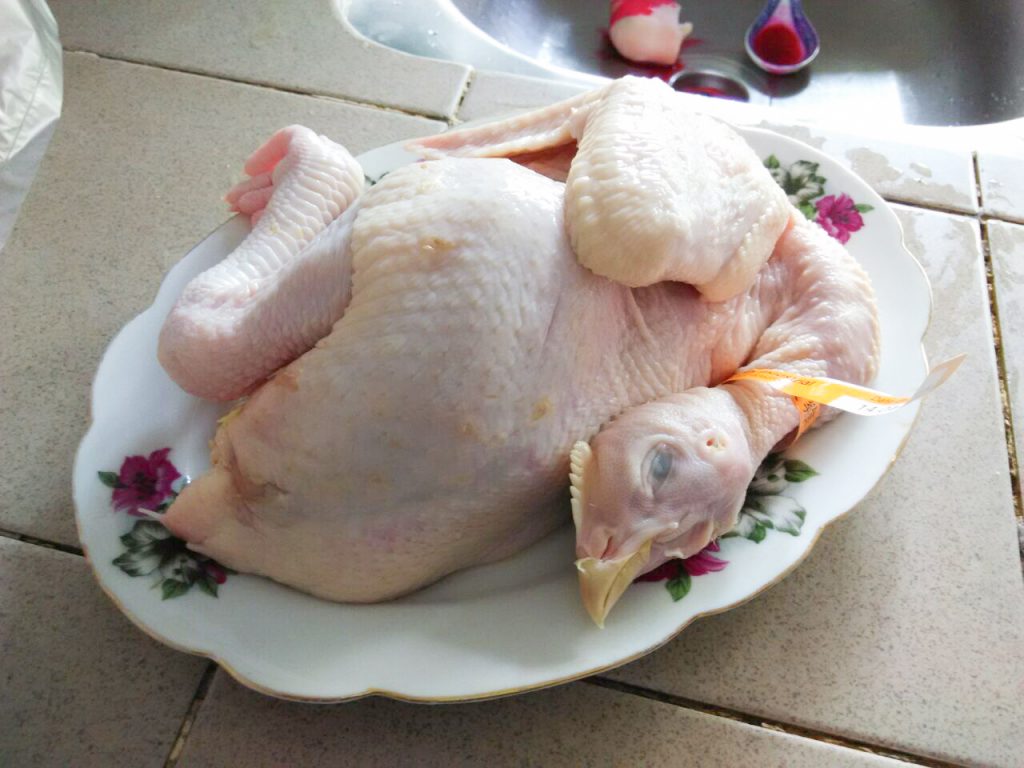 To bring out the gory part, I experimented with Red Dye, but it turned out pink instead. 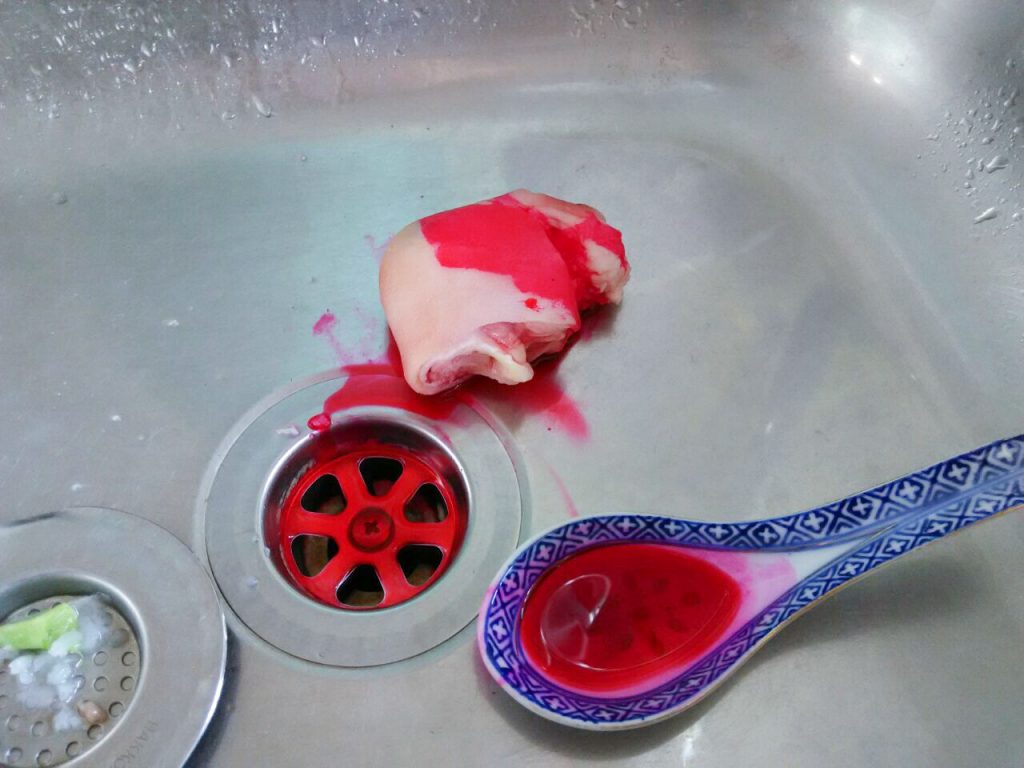 On the day of the installation, I looked for Pheng Yew for the booking of location as I couldn’t find Bharat the week before. I borrowed a table from the Animation Archive room with the help of Pheng Yew as I couldn’t gain access to the Crit Rooms (faulty card readers perhaps). Pheng Yew helped me out a lot on the day of my installation and I’m really grateful for that. 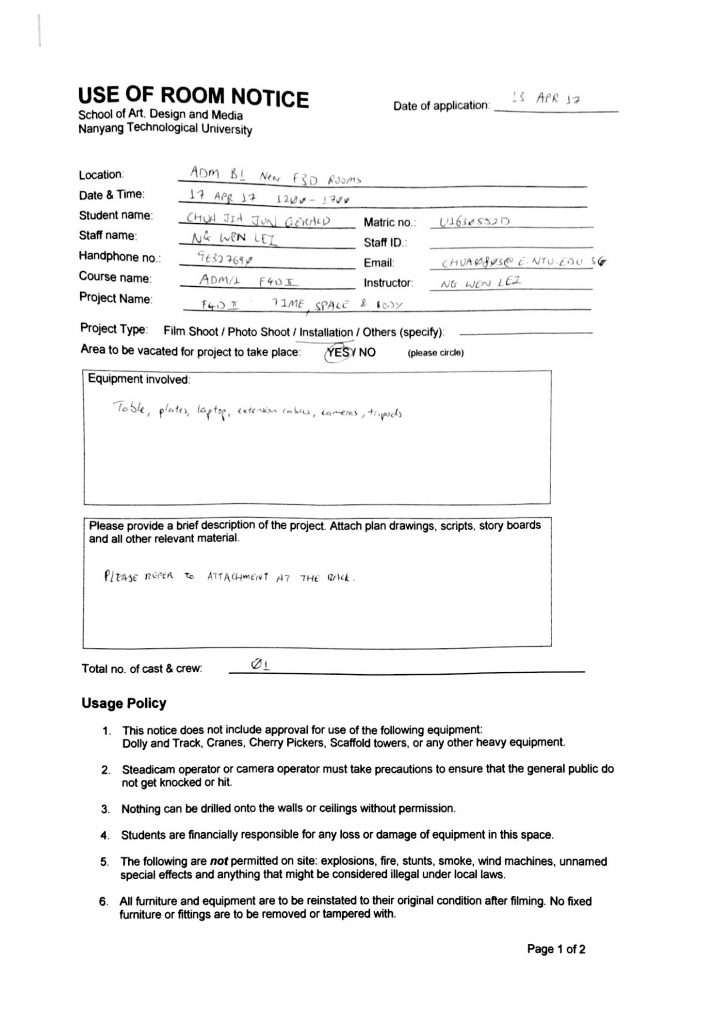 Setting up of the installation:

A white table cloth will be draped over the table and clean plates to resemble a clean dining table. Raw meat (Pig Trotters and Raw Chicken) will be placed on the table to show the undecorated form of food that we eat in our daily lives. A monitor screen will be placed in the center, slightly behind the plates, to show the animal slaughters of both domesticated and farm animals. I have attached my laptop to the monitor with a HDMI cable and the sound will be played out from a portable bluetooth speaker. I set up 2 cameras (font and back of the installation) to capture the movement and reaction of the audience. 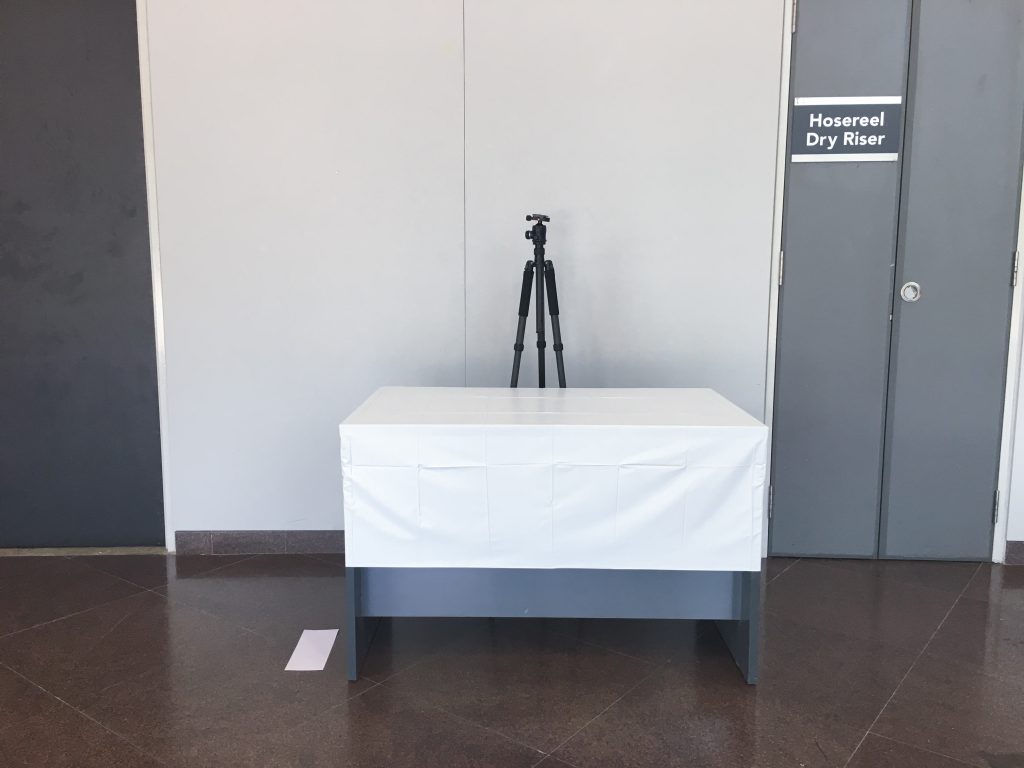 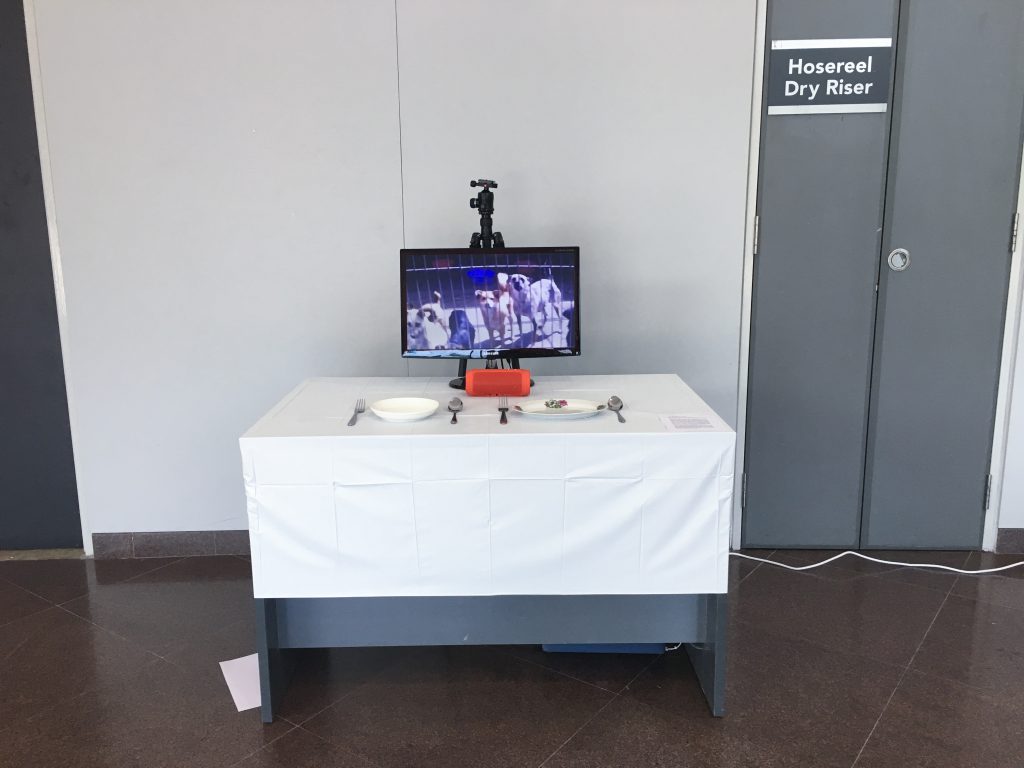 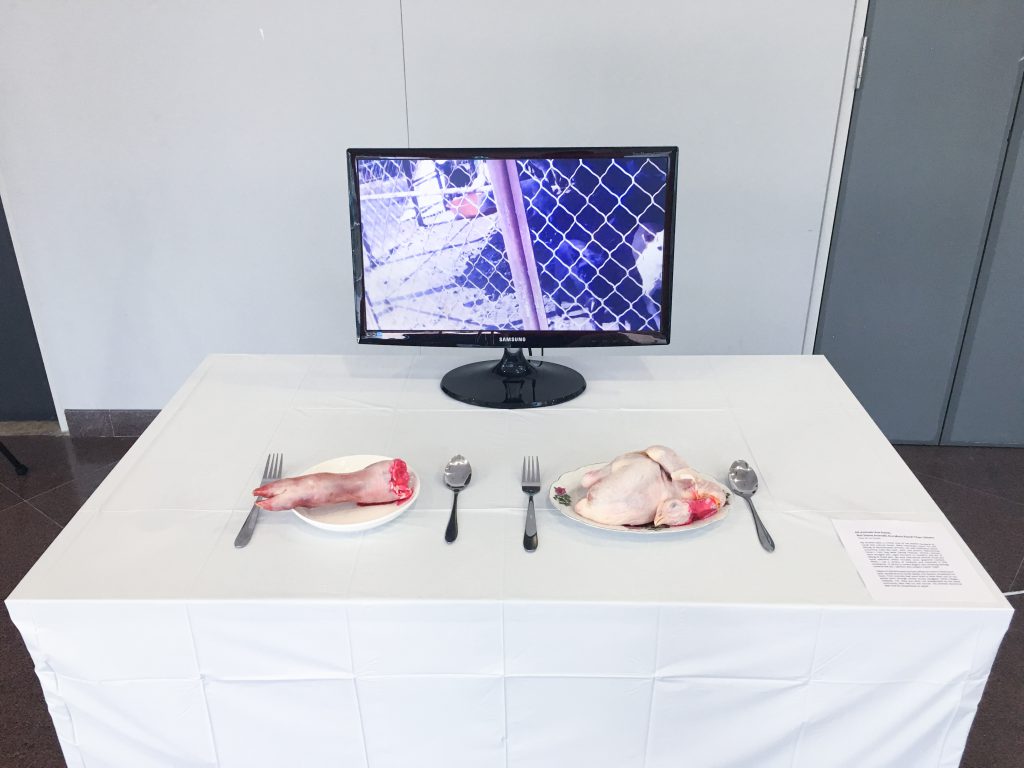 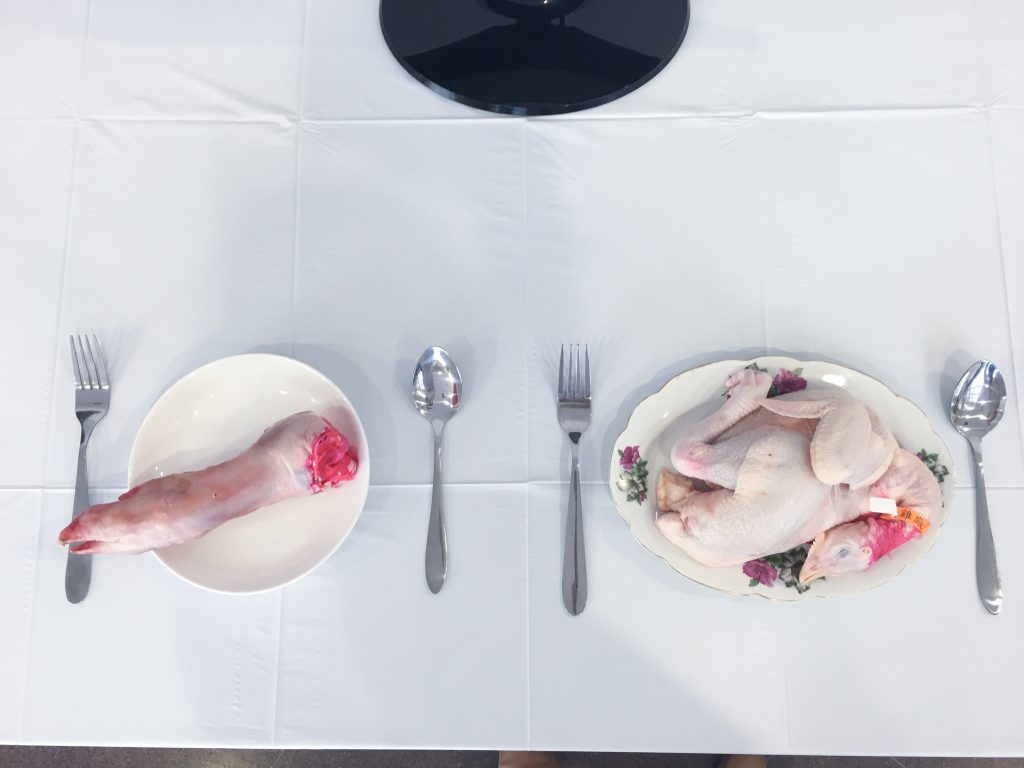 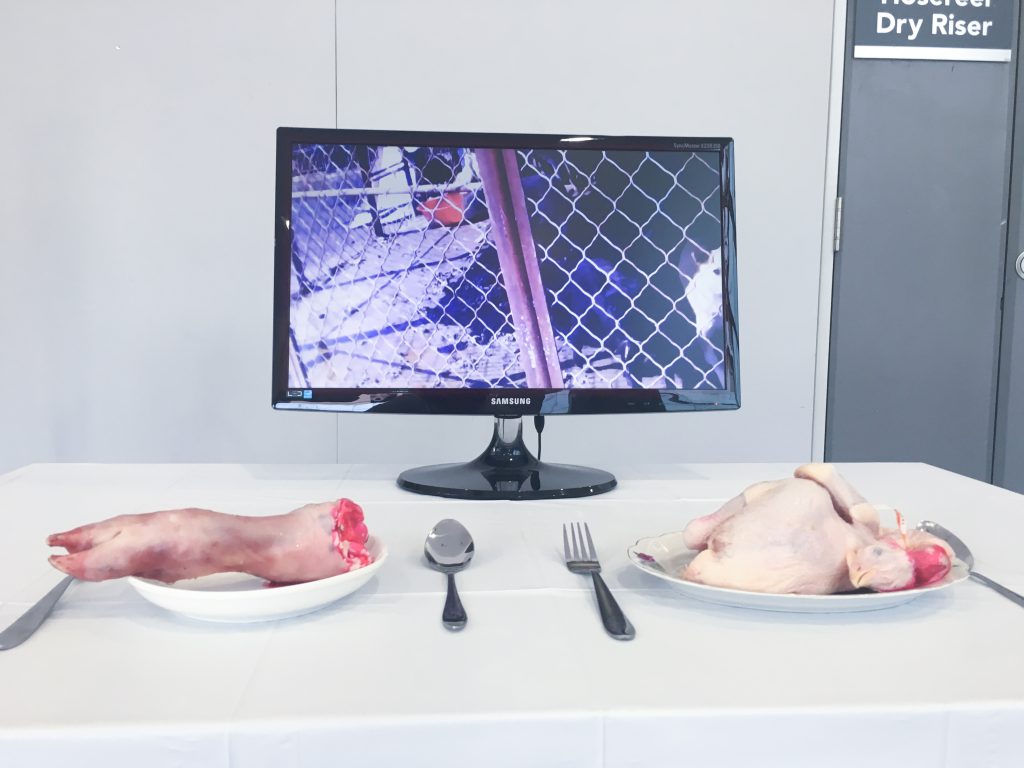 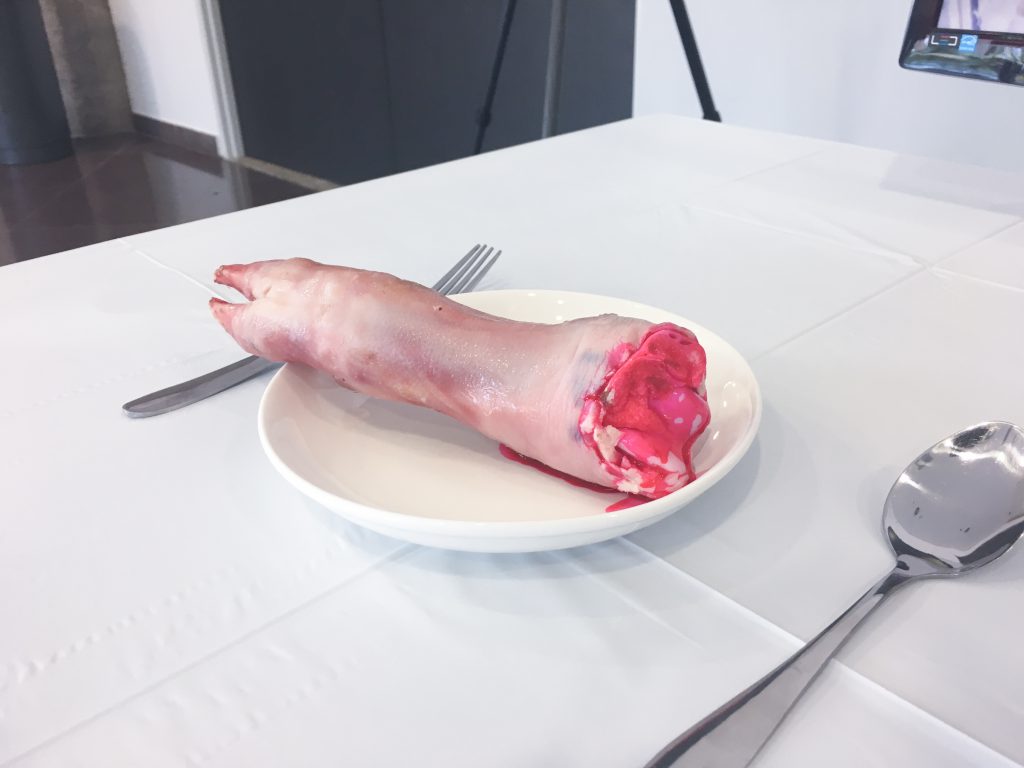 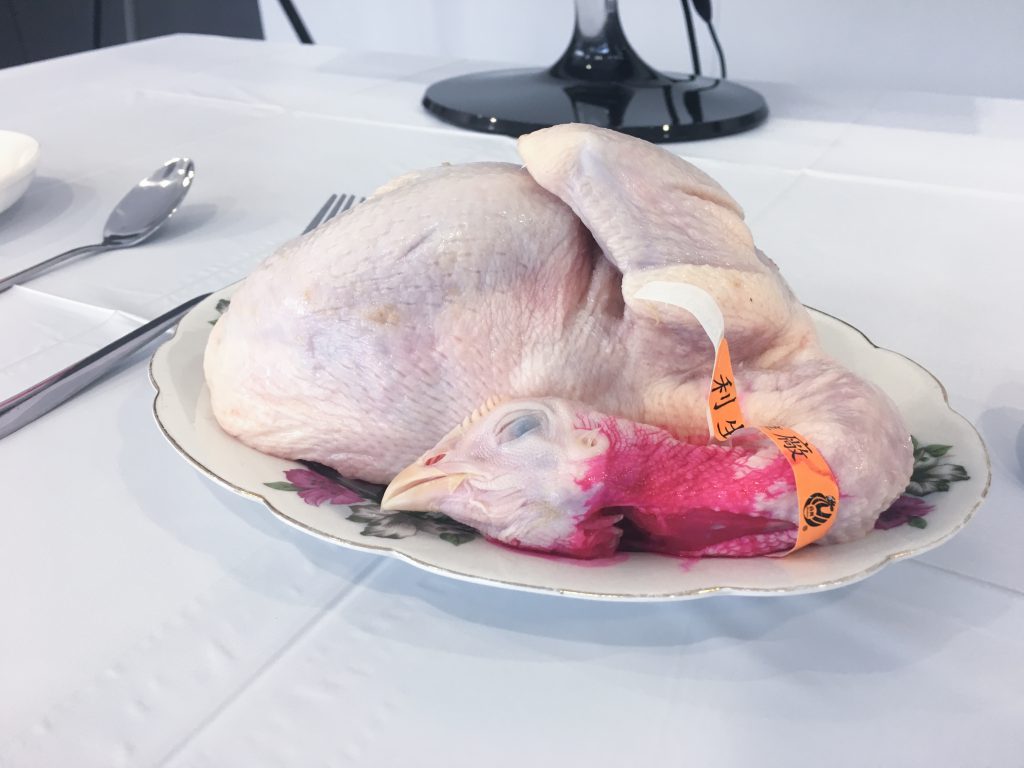 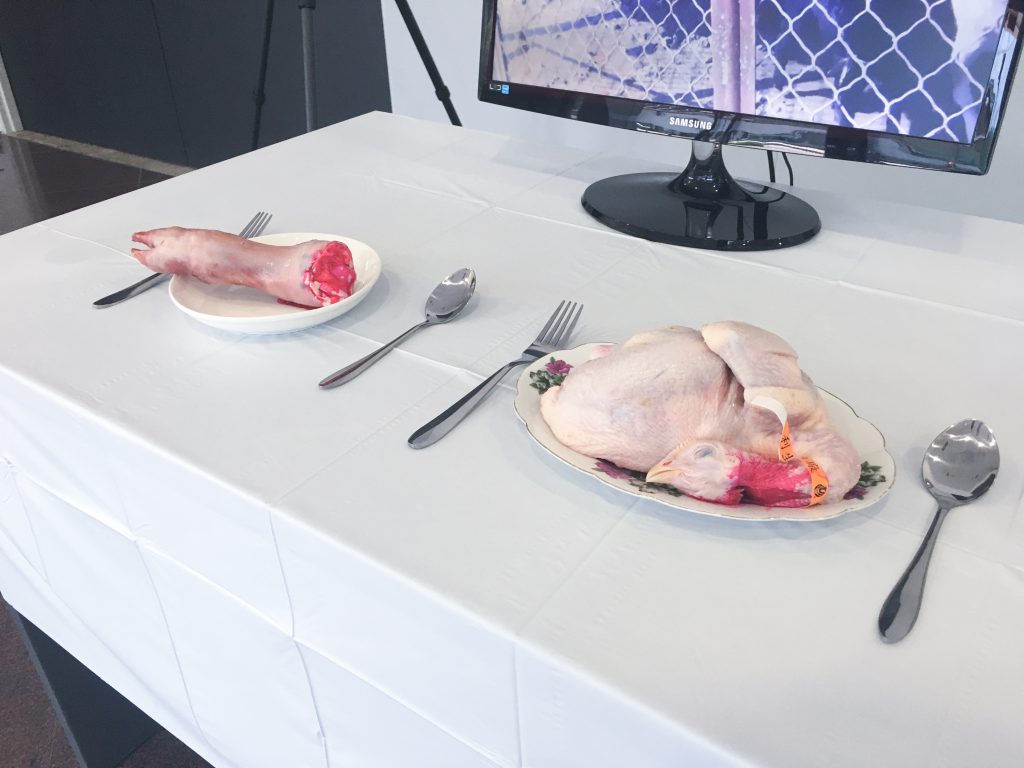 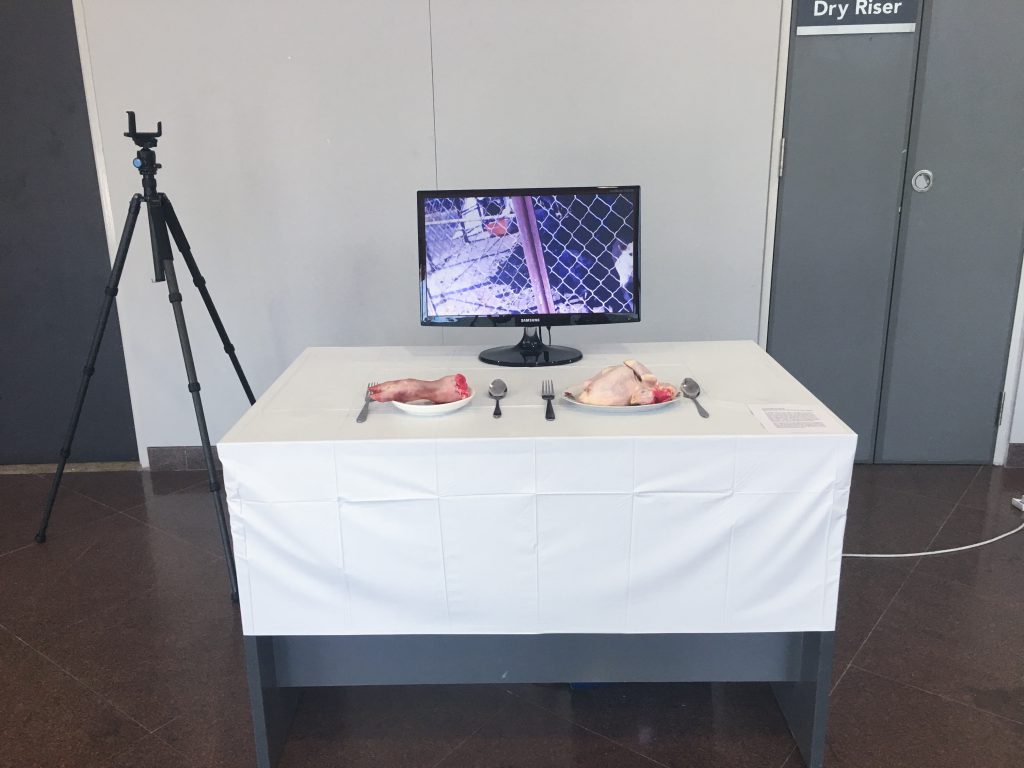 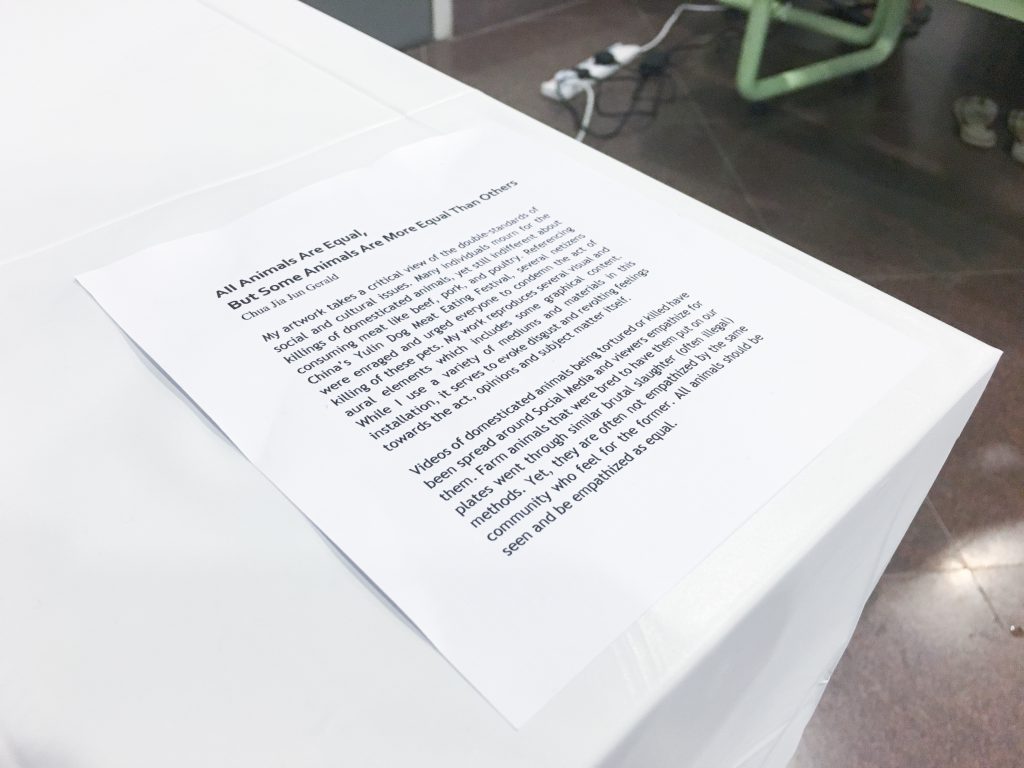 Audience Reaction to the Installation:

Many of them were disturbed by the brutal animal slaughters in the video and are very upset by it, but there were some who can take the violence. Some of them were confused by the message from the installation, argued that:

What I am trying to present is the mentality that everyone should hold, that all animal killings are equally brutal. Dog slaughters are just one of the examples I could find from the web, it is just a representation for domesticated animals. If they think that it is alright to kill farm animals for food, then why not kill their pet companions for food?

Ms Lei commented that my installation is outright gory, giving the shock factor; it may have two different outcomes, and I should think about that.

My thoughts on the first comment is that if they becomes too sensitive, choosing to shut off all thoughts and feelings about the installation, wouldn’t that show that they just want to avoid the subject matter?