Over the course of all these readings, I’ve developed a theory. My theory is that there exists a serious medical condition that afflicts people who read too many art journals, philosophical treatises, and political diatribes. I am calling this “Wodiczko syndrome.”

Much like Tourette syndrome, Wodiczko syndrome manifests through abnormal speech and writing. The unfortunate victims of Wodiczko syndrome are unable to express themselves in normal English sentences. Instead, they are forced to describe their thoughts and experiences only using the most painfully tortured sentences and the most pretentious Latinified vocabulary. 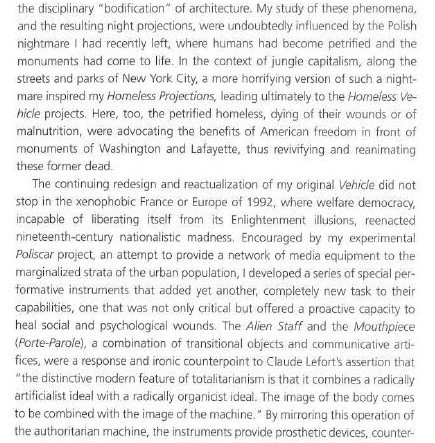 One can only imagine the difficulty that Krzysztof Wodiczko faces in his daily life. Unable to ask “Where is the toilet?” he must instead ask, “Where to be found is that social, civic, and public institution which operates as a hygienic facility for the ablution of the self?” Unable to say “Good morning,” he must instead say “I trust that you are equipped with an adequate élan vital paranthesis vital force paranthesis and capable of self-actualizing your personal desires during the commencement of this diurnal cycle despite the tribulations of the authoritarian jungle-capitalist society that oppresses our livelihoods.”

There is no other way to explain this unbelievable tract. Surely no human being could write something this dense and incomprehensible. Surely no one would choose to be this obtusely verbose on purpose.

In my OSS posts, I’ve discussed the phenomenon of pretentious writing numerous times. Sometimes I write more about it than the content of the text. This is not because I didn’t read the text, but because I think bad writing is a much bigger issue than anything the text purports to teach.

I’ll say it again: the purpose of writing is to communicate. If you write something that is impossible to understand unless you have three degrees and a PhD in bullshit, that does not make your ideas deep. It just drowns out your ideas in the sound of your own verbal diarrhea. It just shuts down any possibility of communicating your ideas to the reader. That is bad writing.

This is doubly heartbreaking when it comes to Wodiczko’s Critical Vehicles because I can tell that he cares deeply about his work. Somewhere behind the walls of text and the oh-so-sophisticated political philosophy, there is a man who is deeply affected by the tragedies he has seen in his lifetime. When he writes about his experiences in the Soviet Union, or the things he has done for the homeless community in New York, you can feel his genuine pain bleeding through.

But all of that is obscured because for some reason, Wodiczko did not feel that his work was able to stand on its own unless he justified it “academically” with French phrases and references to Baudrillard and Marx. As if he had a board of directors to impress or a minimum word count to reach.

Despite his inability to write, Wodiczko is legitimately one of my favorite artists that have been introduced in this course so far, because he acknowledges the yawning gulf that separates the “fine art world” and the “real world.” In Critical Vehicles is an essay condemning the phenomenon of art exhibitions placed in public spaces:

Such a “movement” wants first to protect the autonomy of art, isolating artistic practice from critical public issues, and then to impose this purified practice on the public domain as proof of its accountability.

In other words, it is hypocritical to make “fine art” in the ivory tower of museums and ateliers, then display it in the public space and act as if that makes art “public” or “accessible.” Wodiczko is rightly pointing out that the world of fine art has lost sight of the public society which it is supposedly meant to enrich.

Indeed, once we pare away the meaningless philosophical diatribes and faux-academic trappings, Critical Vehicles illustrates an important and admirable principle. Wodiczko’s works are all about crossing the divide between “fine art” and “society,” or between “high society” and “low society” — creating art that is both practical and accessible to everyone. It is about criticizing boundaries and creating vehicles to cross them.

My favorite works of Wodiczko’s are his Homeless Vehicles, described at the end of the reading. Designed as public shelters and transportation for the homeless people of New York, these devices straddle the line between “sculptural art” and “volunteer public works.” In fact, they are so anti-aesthetic and so far removed from the “fine art sphere” that they might not be considered art at all.

But that is the question Wodiczko poses: what is more important? For something to be pretentious, meaningful, and “artistic,” or for it to have a lasting impact in the community and help bring society together?