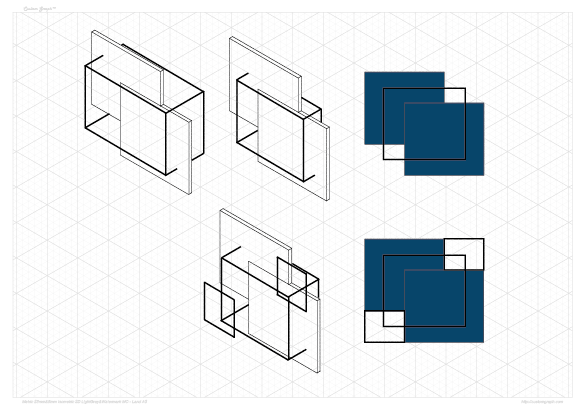 The current interactive 1 project has evolved from it’s infant stages into an installation with much more basic functions. The installation plays with our subconscious comfort to repetitive noise, as well as how people interact with artworks in a designated space. The work is a wall sculpture made out of school table tops and wire frames. Within the structure there are eight modules that clicks pens through the use of solenoids. The sound and score of the pens clicking are randomized and chaotic when the audience is far from the structure. However they will start to click in synchronization as the audience approaches the work over time.

Although the work is not computer based as the examples elaborated in Lev Manovich’s article, it still fulfills some of principles of New Media, the principles being : Numerical Representation, Modularity, Automation and Variability.

Numerical representation is defined when new media are composed of digital code, of which it can be described with a mathematical function. The data goes through an algorithmic manipulation before being transmitted as a new product. A big part of the installation relies on this numerical representation to function. Firstly the data retrieved from the camera manipulated optical (kinect) or sonic (ultrasonic sensor) data into numerical data that is relayed into the Arduino. The data once again gets manipulated into certain conditions to transform them into signals and scores for the solenoid to go off with.

One of my artist references for this piece is Ryoji Ikeda with his work Test Pattern in particular. His work is an iconic example of numerical representation as he visualizes his research of sound with mathematics and science. For this piece he was representing the effect of how different ratios in sound can result in varied responses. By reflecting the data acquired into binary 1 and 0s, they appeared as black and white strips across the light panels. Sounds that can’t be heard by the human ear is represented visually for the audience to experience the chaos that can’t be processed normally.
His work goes beyond just manipulating data to create an experience but harvests the data as material for his compositions.

As proposed by Manovich, new media objects are object oriented, being composed of parts made up of smaller parts. We can break down the installation through the various modules of which the data is transmitted to and from to create the final output of the sounds produced. The modules include the computer, the microprocessor (Arduino), the relay and the solenoids. Another interesting note we took from the research is that the focus is more on the pattern and rhythm of the score rather than the sound of the pens. Therefore the solenoid and pens are modular as we can switch it out to a different device or object that creates a different sound but still hold the integrity of our original concept.

Coming from a non technical degree course automation saves lives with users who have zero knowledge in coding. Automation exists in the coding programmes such as Processing and Arduino. They hold libraries that are created and programmed from scratch by other users that allow for the mathematic manipulation of data into something more sensible for the common man. It’s similar to the example given of a filter in Photoshop where the user can just apply the function and receive the end result immediately. An example of the library we used in the prototyping of the installation was the library for the ultrasonic sensor. The library translate the delay with the sound waves that the sensor is giving our and receiving and translates the timings into metric values.

The elements of this installation that we have no control over is the scores as well as the distance values being received from the sensors. The variable in the installation is defined as the element that changes the cycles or the output of the sound. As we plan to use a randomizer in our code to trigger the solenoids off, there won’t be a fixed score throughout the installation. The sounds are a variable to computer randomization. Another variable is the the audience interaction as their distance from the work will translate into the intensity of the sound. As we have no control over how the audience is interacting with the work, there will not be a fixed sound throughout the installation. They affect the data received by our sensors, in terms of the audience size, speed of which they approach the work and how long they stay in the proximity of the installation will translate into a different soundscape at every moment.