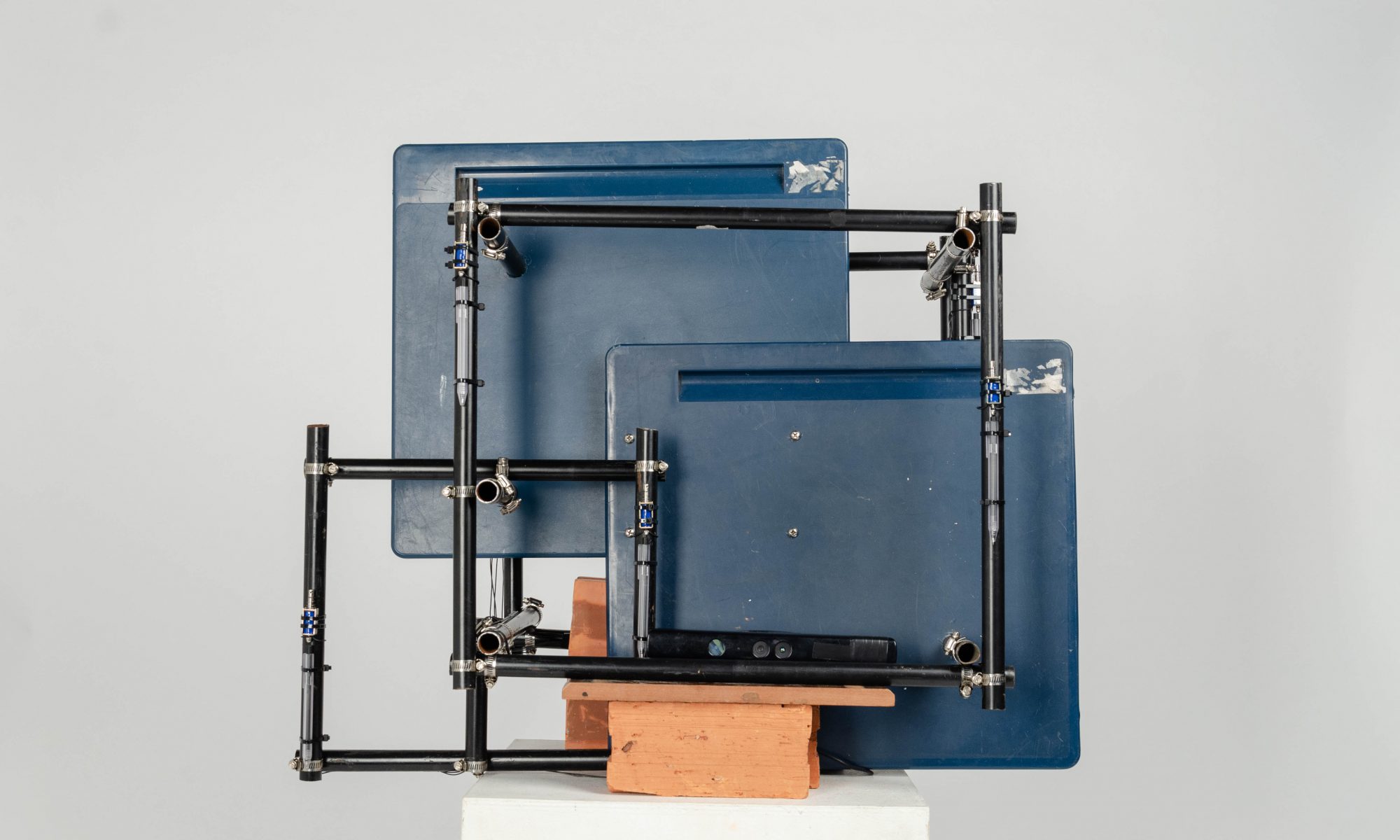 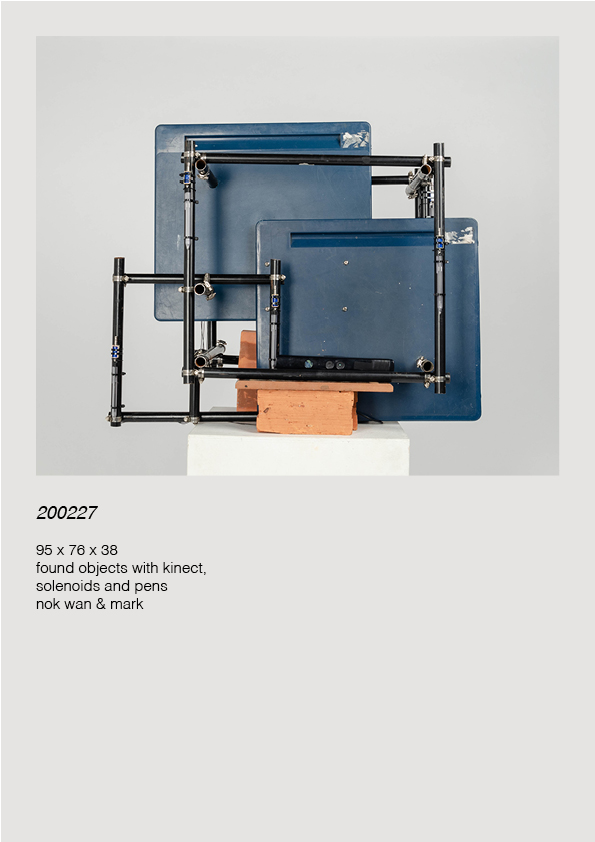 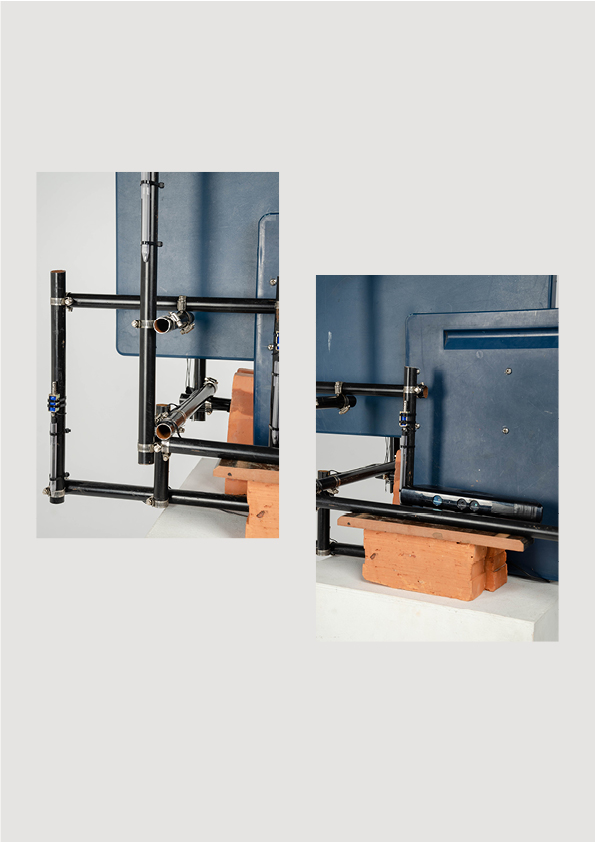 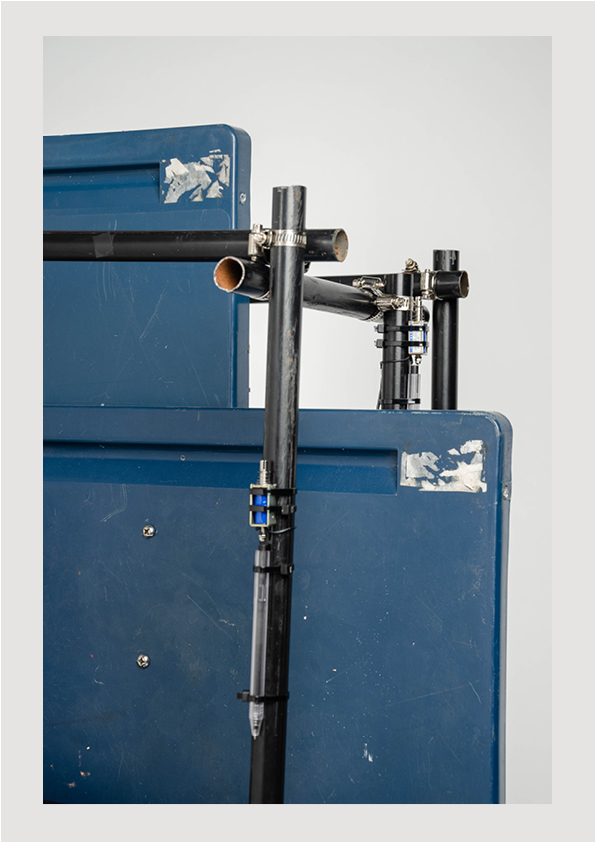 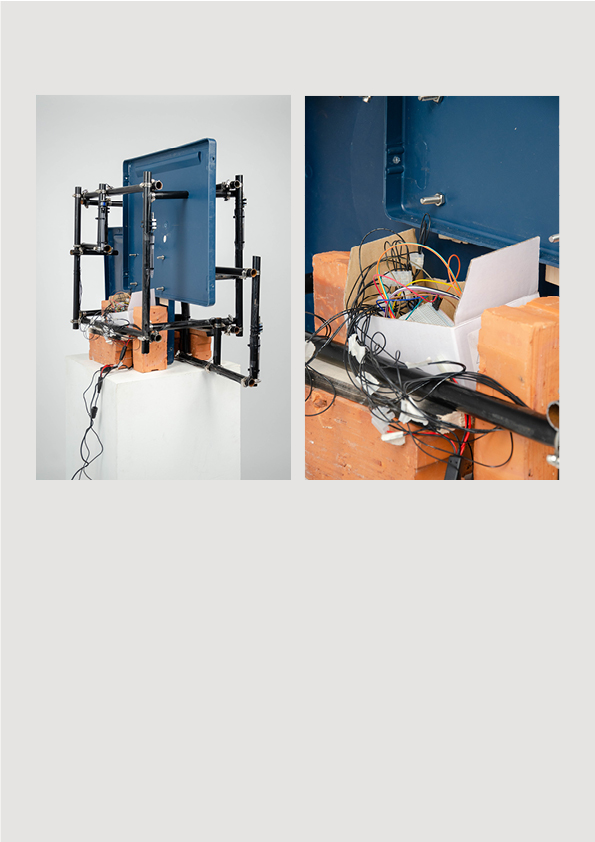 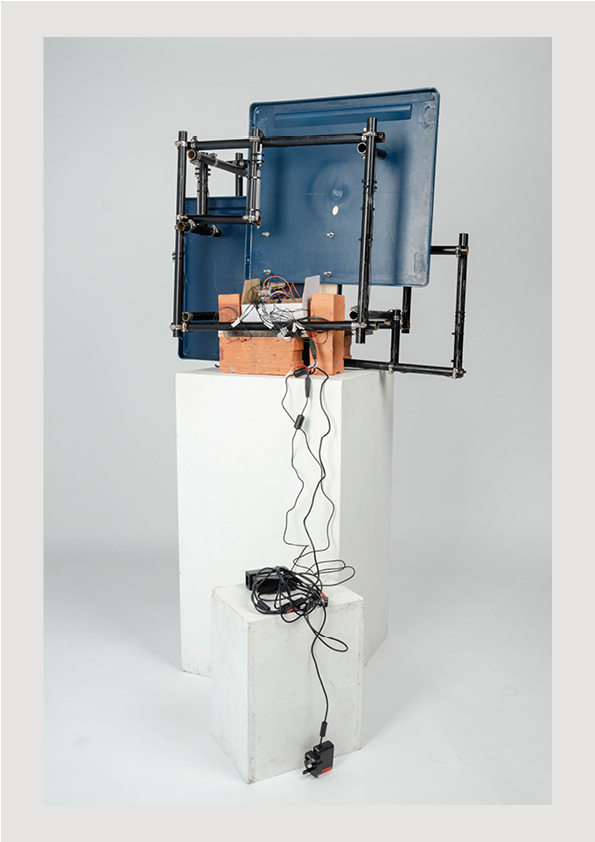 200227 is a sound installation that examines the attraction of rhythm and anticipation. We identified “interstice” as the intervals between a sound, where the lengths of intervals create a rhythm. This piece allows the audience to alter the sonic experience by their movement and behaviour within the space. The sounds created are chaotic and unpredictable when engaging with the piece at a distance. However when they close in towards it, the sounds start to synchronize and settle in a repetitive score. The interactive options in the space encourages the audience to identify what rhythmic composition and intensity is attractive or pleasurable to their ears.

We wanted to work on a project that transforms a banal or annoying sound into a pleasurable composition. One of our initial inspirations for the projects was a experiment of 32 metronomes ticking at a chaotic rhythm and slowly coming in synch due to the weights of the metronome swinging in resonance with the table.

We identified the sound we wanted to work with which are the clicking of pens in the context of a classroom or a exam hall, where when someone begins to rapidly click a pen more students join in to annoy their teacher or peers. It became a challenge to find a method in which we can transform a sound that carries a negative conniption and experience into something pleasant and attractive to the ears.

Our artist references created works where their installations used industrial or everyday objects to create soundscapes that had presence in the space and also a certain allure to make the viewer stay. Zimoun creates sound installations using common materials that create sounds that expands and consumes an exhibition space. He uses cardboard boxes, styrofoam and metal wires with simple motors and mechanisms to scratch, hit and graze to create a trance like drone sound. He multiples a simple noise and through the overlapping of the same sound in various timings, it creates a calming and consistent tone with one sculpture.

Zul Mahmod with his work DIALOG(2016) featured an installation along the walkway of the Esplanade tunnel. The installation featured a composition that was played out by solenoids hitting a copper pipe. With the hollow sound of the pipe reverberating throughout the room. We found the interaction of the sound in relation of the movement of the audience intriguing. The nature of a walkway directs the audience from travelling from one point to the other or in an inverse direction. The artist have to create an experience that accompanies the behaviour of the user. The audience are most probably constantly in motion, thus the quality of the sound created from the structure is always in flux. This gives the control of the quality of the sound experience to the audience as the positioning of the sound sources are always different.

From our research we identified a few qualities we wanted to experiment with in terms of both the interactivity and what makes a sound attractive. 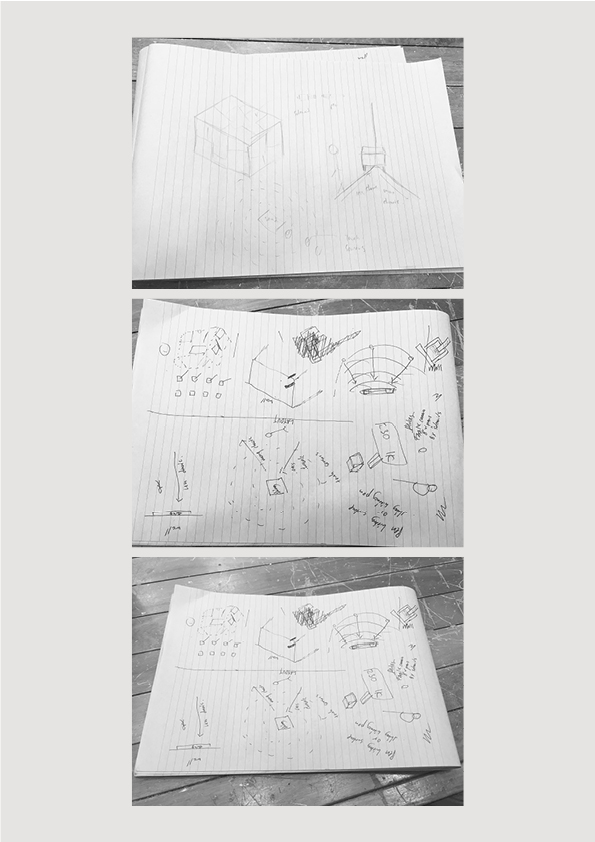 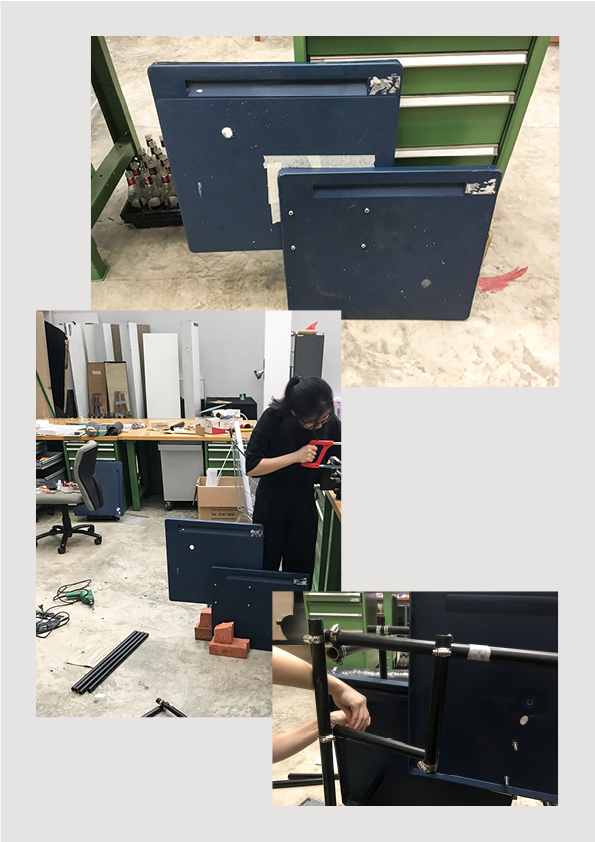 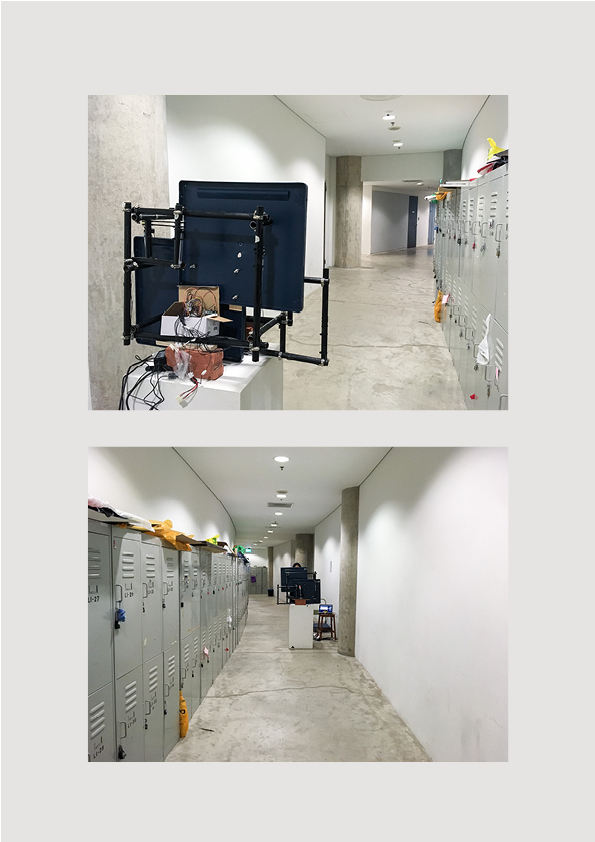 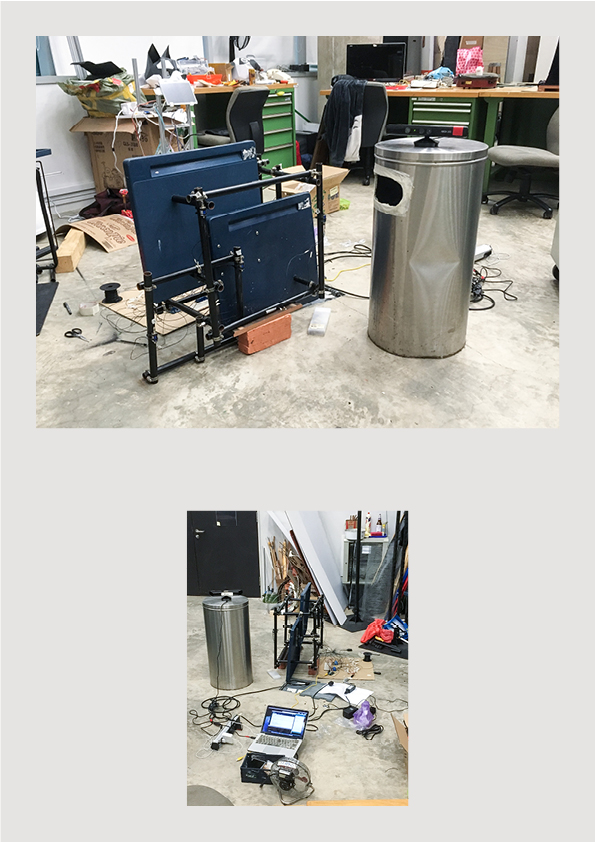 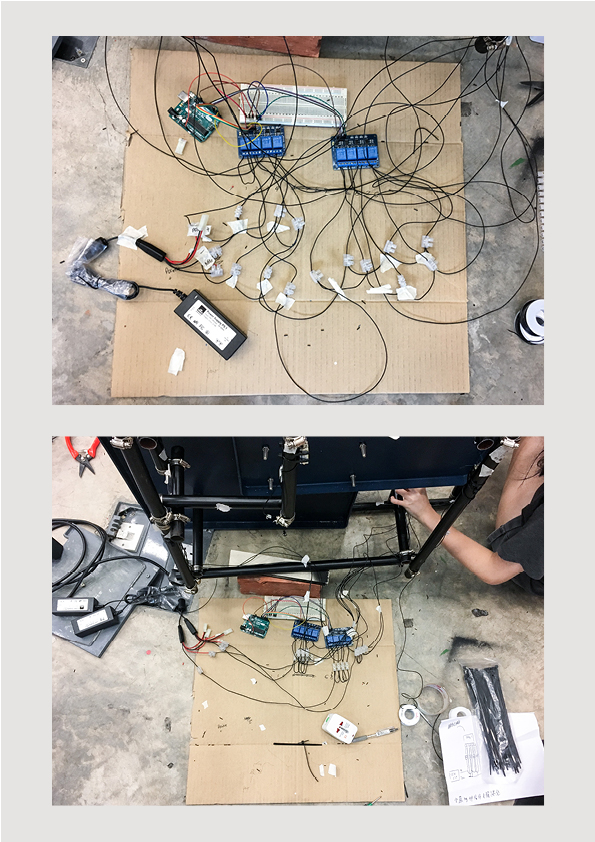 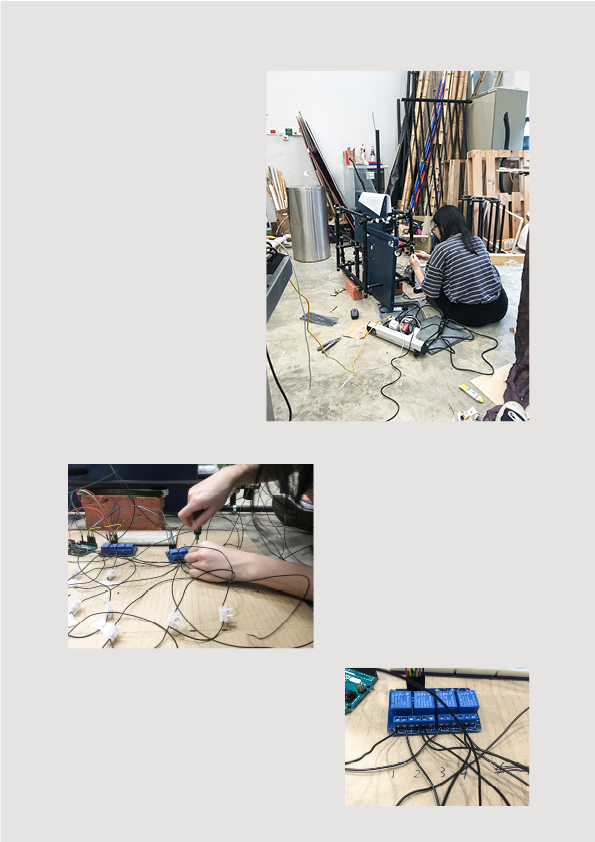 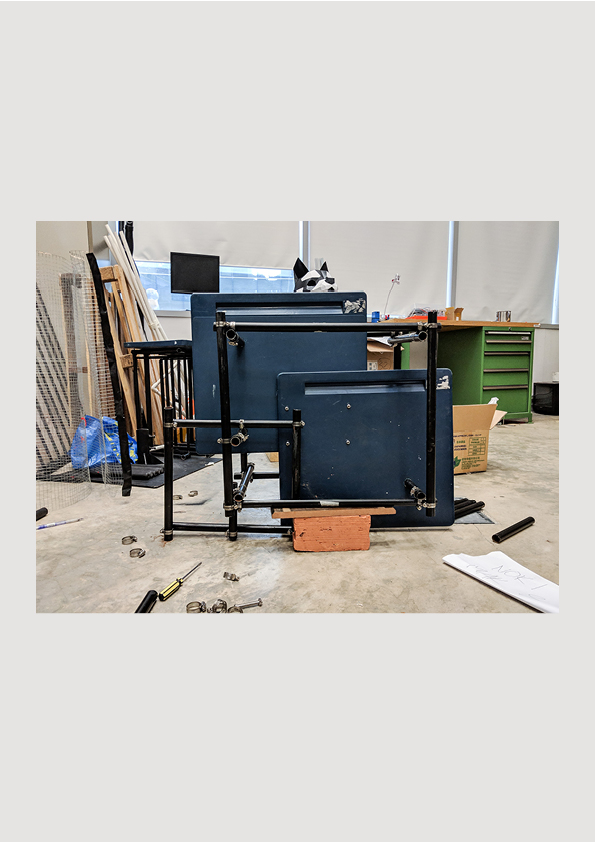 The sculpture can be split into two parts, the software branch that consists of Processing, Arduino and the Kinect and the hardware branch where consist of the relay and solenoids.

We create random compositions through an array list and a delay mechanism in Processing that generate random numbers in various delays. This is translated as output pin activation in the Arduino (via Firmata), of which is connected to the relay. The Kinect is also linked through Processing, taking in the depth data of the audience in proximity of the space. It splits the depth reading into 3 zones and through a (If statement) plays the appropriate random composition and delay for the zone.

When the pin signal of the Arduino is sent to the relay, it completes the circuit of solenoid. The solenoid when energised pushes the pin and clicks the pen.

Our interactive project falls in between the spectrum of a passive and interactive installation. The viewer has the control for change that makes the project interactive, but they are not in control of the exact rhythm and composition of the sounds. In the Continuums of Interactivity by Nathan Shedroff, we identify the interactions in the categories of Feedback and Control. The feedback in this installation is moderate as change in rhythm and visual cues of the solenoids clicking on the pen can be seen when you enter the active space of the sculpture. However to activate and notice the subtle differences in the zones of the piece, the viewer has to to concentrate and spend time in the space and distance to notice the changes. Therefore the feedback is in the middle of the spectrum as it is reactive, but won’t respond as well if the viewer is moving to and from the sculpture at a fast pace. The viewer has control of the rhythms and intensities by moving through the various zones that each carry a different variation. However the composition of the rhythms are randomly generated by the computer, therefore the viewer does not have total control of the experience.

Breaking down the interactions through the Characteristics of Interfaces by Richard Colson, we can further define the nature of the interaction in our project. Firstly, the user is one of many variables that can change the sounds produced. This is due to the sculpture not being able to create a personalised experience when there are multiple viewers in the space. Each viewer can affect the compositions but only one will feel valued at one time. There is an intuitive selection/result relationship with the work and the viewer, as there is an opportunity for the viewer to work with the interaction to dig the subtleties of piece. Lastly for the structure of the interface, there are constant elements providing continuity in the experience. When the user stops moving throughout the zones, there is still feedback from the sculpture, playing a certain composition. The sculpture is constantly creating sounds to fill the space with or without the viewer actively participating in it.

We were too ambitious at the start during the visualisation of the sculpture mechanism on paper.

There were supposed to be motors which would turn and point the pens at the user’s location.

We scraped that idea (thankfully)

I learnt a lot about writing code effectively. There are so many different ways to write them for the same result. But the best way is the shortest and the clearest way.

There was still a lag in reactivity due to the presence of delays in the code. Each zone loop has to be completed before the program is able to read the depth information from the kinect to enter 1 of the zones. There must be a way to constantly check for the depth and for the code to jump out instead of completing the zone. I have an idea that introducing a internal countdown would work, but there were no time to test it out. Definitely something to improve on.

Our initial hypothesis of repetition being a comforting sound had inverse effects when the work was installed in the space. We had feedback from the viewers that they prefer the chaotic sound when further away from the work in comparison to repeated score when the pens are clicking in tandem. The synchronised clicking sounded very aggressive and confrontational, almost giving the structure a human behaviour and reaction. I think is due to the distance the viewer is standing at, the sound of the sculpture is much louder in comparison to the chaotic rhythm from far away. The fact that all of the solenoids are going off at once, the solenoids sound like they are going off at the same pitch. The chaotic rhythms on the other hand have the illusion of creating various pitches that form a melody of sorts. The sounds created by the solenoids and pens behind the table tops come off muffled in comparison to the ones in the front. The variations in the sound quality creates a more interesting composition to listen to compared to the ones in sync.

I feel that the the general interest for the the chaotic but more melodic sound has a relation to how much time people usually spend with artworks. There is much more activity occurring with the chaotic rhythms and thus seems more exciting for the ears despite it’s chaos. In a nutshell, variation and pitch are more interesting and attractive sounds.

One aspect I felt we should’ve done better was the selection and calibration of the space. The work should be designed around and for a space rather than a singular entity. The human traffic flow and the general soundscape of the space has to be taken into consideration when creating an interactive project. Our current installation didn’t work as well as the corridor was rather noisy and also cut off from the main exhibition area. We could’ve also spent more time in customising the rhythms to have a more gradual change as the viewers tend to walk in and out really quickly.

Work in progress videos can be visited through these links: 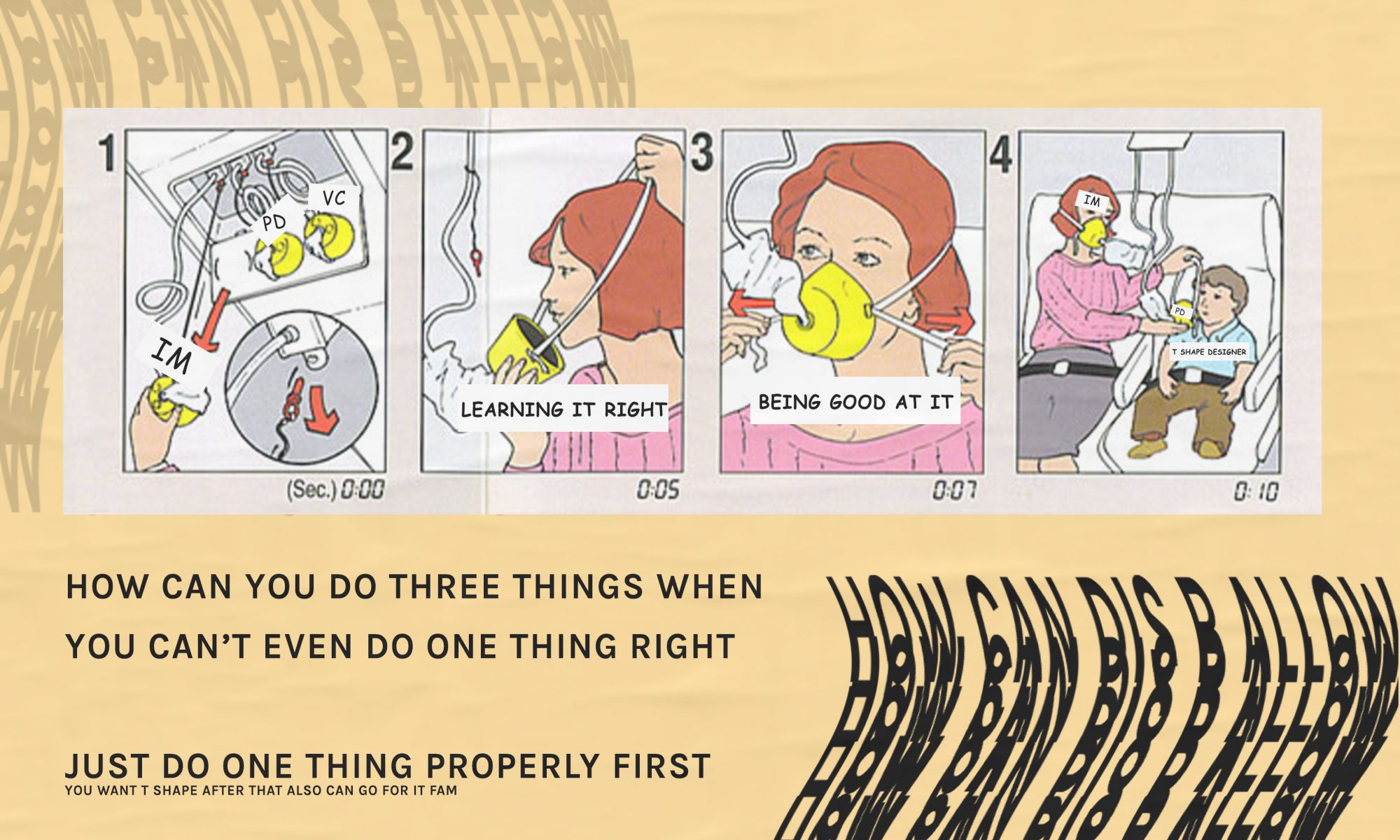 Do you know why you have to put on your own oxygen mask before helping your kids? Because if you don’t do that you both die.
How are you going to dive into another discipline of craft if you can’t even be a master of one to save your own life.

– Be good at your discipline and take pride in the quality of work you put out.

– Diversify only when you are good enough.

– Cross disciplinary work is impressive when their technical foundations are executed well. If you want to jump boats, don’t half ass it.

It’s the arts and craft movement in the 2020s BAYBEEEE