The objective of the work is to allow the crowd to participate in my conditioning. An example of conditioning is training the test subject to react to certain triggers, in this case my group has conditioned me to react to a new ‘joined’ notification by anticipating a flick on my forehead.

We uploaded a post on Instagram to preempt the audience of our project but we did not reveal the purpose of it. Then, we started an Instagram live video that can be accessed by my followers. We started off the project by using tickling as an action and using likes as a trigger. As the participants were either my friends or acquaintances, they enjoyed the little exercise quite a bit by leaving comments such as ‘I spammed likes, tickle him harder’ and so on. They did not take it seriously as they were able to feel satisfied with low consequences as ‘flicking’ was not inherently dangerous. After a while, I stopped reacting to the tickles as I was used to them and the participants were able to spam likes on a live story, making the reaction less responsive.

We decided to create a better conditioning by changing it to flicking my forehead as an action and joining/leaving a comment on my live chat as a trigger. Whenever someone comes to watch the live video, a notification will appear and state ”XXX joined”. When that happens, either Li Xuan or Han Yun will give me a flick on my forehead. After awhile, I become accustomed to the feeling of getting flicked whenever a new person joined, and I had some anticipatory reaction even when the two of them did not flick me. At that point of time, I still flinched whenever new somebody joined as I was conditioned.

The creators of the project were both the crowd and the test subject (me). Without the participants, the work will not achieve the intended outcome as I will not get flicked and be conditioned. It was different than the classic conditioning done by Ivan Pavlov – refer to https://www.youtube.com/watch?v=iawj42z4dPM , as my project involved a crowd that was essential to making the conditioning work. Unlike his experiment having a constant, mine did not have one as my participants were a variable. They were able to choose whenever and how many times they want to appear.

How are we so sure that the participants (my friends) would join the live chat and watch me get flicked? We based it off the schadenfreude experience. Schadenfreude is the experience of pleasure, joy, or self-satisfaction that comes from learning of or witnessing the troubles, failures, or humiliation of another. It is one of four related emotions or concepts. Hence, we were sure that my friends would want to see me get flicked. Indeed, there were some who left the room and rejoined just to see me get flicked more than once.

We had to switch up the project as we did not get the intended response whilst using 3 phones as Li Xuan and Han Yun’s friends did not know me and did not care to inflict pain on me. Additionally, I learnt that having a controlled group of participants were important as the context of the audience would affect the intended outcome of the work.

Siva Vaidhyanathan’s writing on open source culture aids us in the understanding of the longevity of open source thinking, combatting the proprietary model that emerged in the 20th century. Open source usually refers to the sharing of blueprints, recipes, and information that includes, but is not limited to software and manufacturing.

Open source does not encourage monopoly, but rather peer to peer interaction that involves multiple parties to work together to build on a common project, so long as they carry the same license (an official permission). It encourages growth, development and accentuates the benefits of working together. Closed source, on the other hand, rejects third-party interaction and maintains a monopoly to not lose revenue from sharing information. To those that adopt a proprietary ideology, innovation is fuelled by commercial gains (Vaidhyanathan, Open Source, 2005). While this may be true to a certain extent, it is not applicable to those who innovate solely for artistic or non-commercial purposes, or even gestures for themselves or others.

This does not mean that open source should be an entirely ‘selfless’ model, as people can remodify, improve and develop based on the information provided freely and commercialise it (Vaidhyanathan, Open Source, 2005). It is however not done at the expense of the provider of the source, which is why open source works. Wikipedia is an open source online encyclopaedia which allows anyone to edit. Wikipedia Art, a collaborative project by Nathaniel Stern and Scott Kildall, was started as a conventional Wikipedia page and intended for art editors to modify the page however they liked, so long as they adhered to the strict guidelines and rule of Wikipedia. However, it was shrouded in controversy and was officially removed only 15 hours into the project.

Wikipedia Art was a perfect example of a non-commercial interaction shut down by Wikipedia in order to protect the integrity of it as an encyclopaedia. Some argued that Wikipedia Art should be removed as it should not be allowed to reference itself, as this created a paradox. Wikipedia further ‘fenced off’ (Vaidhyanathan, Open Source, 2005) the artists by threatening to take legal action against them for using ‘Wikipedia’ as their domain name, according to https://www.eff.org/deeplinks/2009/04/wikipedia-threatens-. It was out of character for an open source owner to pull copyright claims on a third-party that did not exploit their domain for monetary gains. Wikipedia’s reaction to Wikipedia Art sparked debate with the online community, and at the same time unintentionally garnered traction for the project. For Wikipedia Art, this may well be a successful attempt at creating art, as they have achieved an unintended outcome that aligned with their goals.

Even though Wikipedia Art has been removed from the official Wikipedia page, it continues to be ‘resurrected’ through different users and engaging in a discussion of it. While this can be considered a successful project, it also unintentionally highlighted the flaws of Wikipedia as an open source. In retrospect, I felt that the project could have been approached in a different manner which would have avoided the controversy that it did not mean to spark. 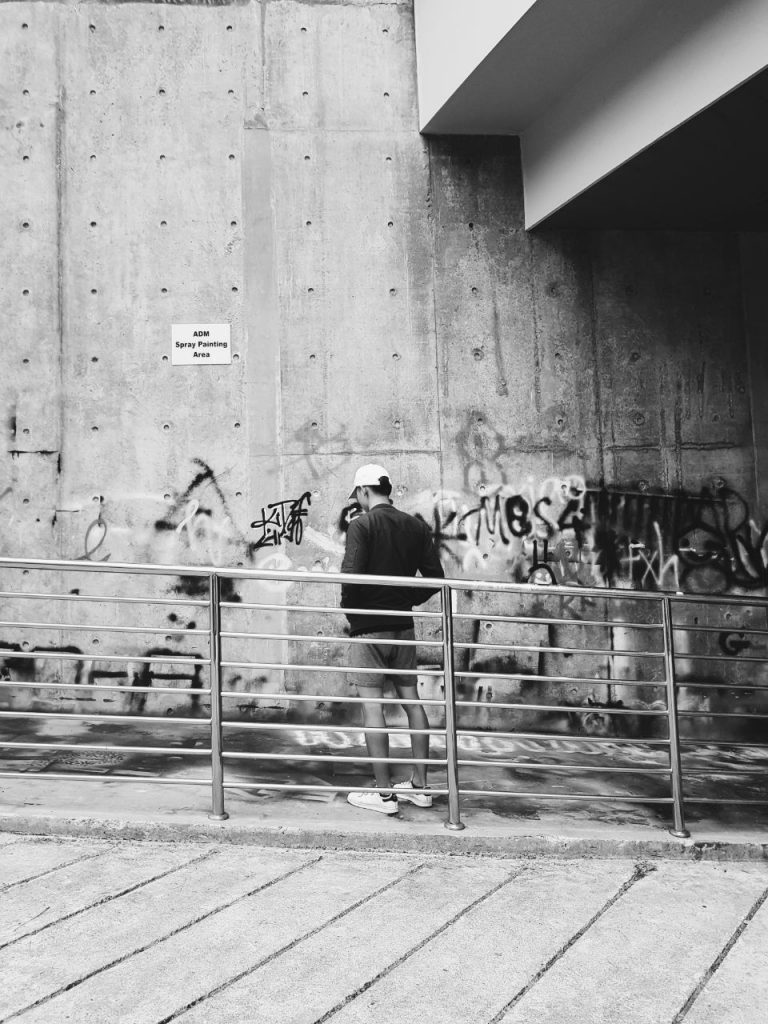 The spray paint area in front of the ADM car park; where I had spent many hours(one day in particular) to finish up a 3D project, captured a still memory of my dilemma. In a flashback which I can perfectly re-enact, Jasmine(classmate) and I were staying back late to complete our 3d project over the weekends. Holding two spray cans in my hands, I was tapping my feet and pacing up and down the spray painting area, thinking about my next step of my 3d assignment. Late hours and hard decisions were a constant in my ADM experience, and I have chosen this space as it brought me back to the moment of dilemma, an alternate space of thoughts and ideas.

This alternate virtual space I created was characterized by my creative thoughts, layered into rooms of hypothetical outcomes and boxes of imagination. The ‘messiness’ and past graffiti on the walls made me ponder on the decisions these ‘street artists’ have made, be it for fun or had meaning behind them.

The outdoor space that distinguished itself from the rest of ADM was almost ‘open-source’, where people can edit, add upon or even remove (by covering over with spray paint), and that in a way modifies the alternate space as a new user of that space comes along. It is also possible to change the space alone or with others, as it is not bound by its physical properties and changes with the intent of users.