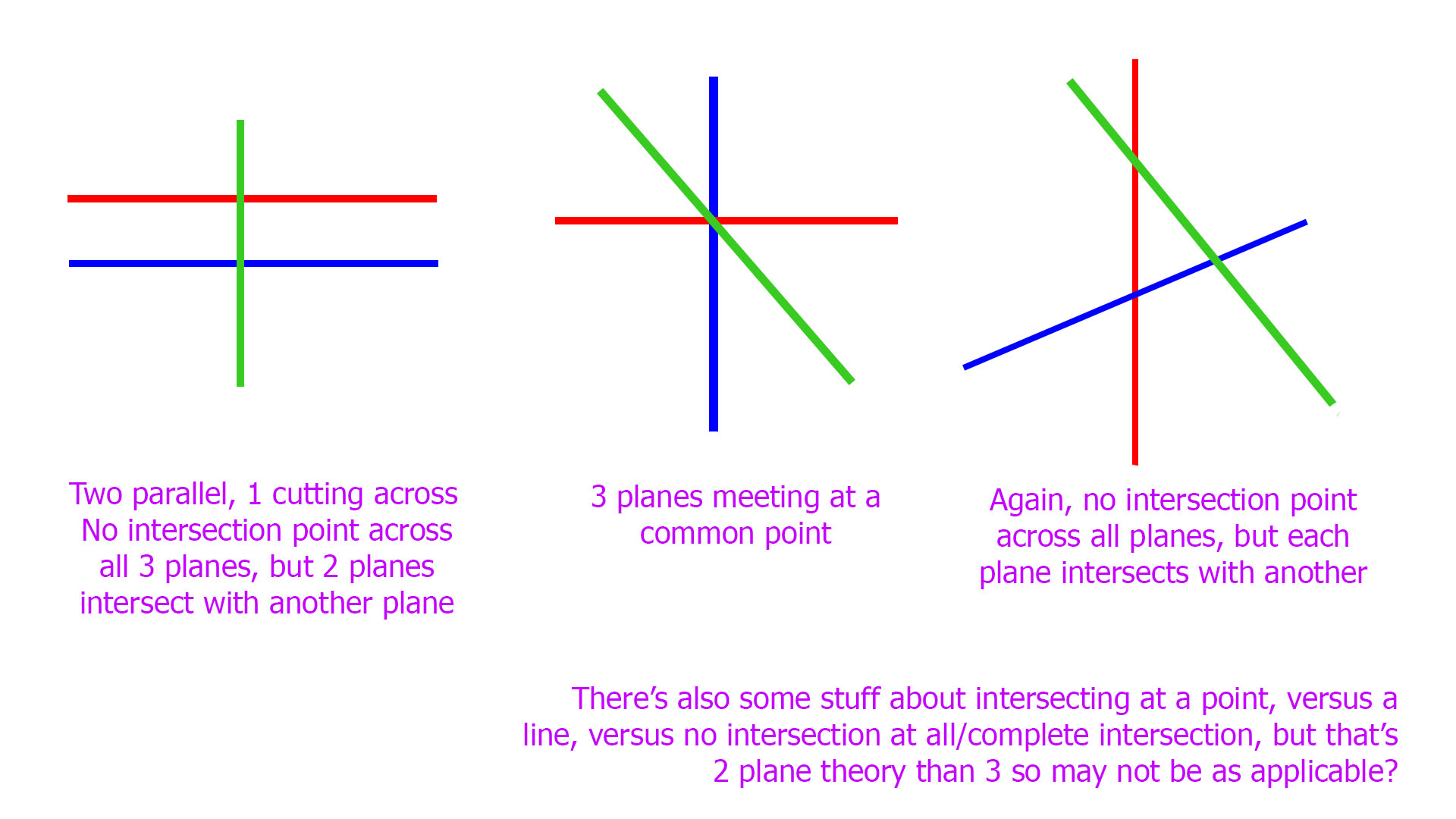 My term was XYZ axes, and it immediately sparked tragic memories of a topic named Vectors in a subject named H2 Math, which I never quite managed to pass. On a brighter note, that prior knowledge was somewhat effective in assisting me. Here’s some of the things I still remember which vaguely helped me:

I didn’t particularly think of this while working, and not all of it is applicable because we can only use right angles, but it was what unconsciously led me to thoughts on things like origin points, etc.

I really disliked my previous designs, especially where jointing wasn’t available yet. It’s a little hard for me to see the 3D-ness happen if I can’t joint to allow the edges to jut across all 6 sides, than just 3, which undermines the unflatness.

For versatility purposes, I decided to use foam rather than boxes, where my dismal collection of  boxes didn’t seem to fit together well (and the colours were rather distracting). Consequently, I headed out to ADM, picked out pieces of scrap foam at random, and spent a wonderful late evening of foam cutting! (This was mostly just to straighten the edges, but it’s surprisingly therapeutic once you get into the routine.)

The usage of the foam cutting machine, along with a pet peeve of mine (which involves the use of too many rules at once), led to me deciding to make this.

After the initial cutting therapy, I started to notice that there was 2 ways to cut the foam: one, by lining the part to be discarded on the left and the part to be kept on the right; two, vice versa. I know it sounds incredibly simple, and it probably IS very obvious, but I’m ashamed to say that my common sense also failed me similarly when it came to paper cutting for Foundation 2D. Regardless, prior to this I had only been using method 1 to cut, so with this epiphany I realised I could use the measurements to line up and cut the foam to certain dimensions as so desired.

I’ve previously mentioned that I have a certain distaste for similar shapes, similar meaning sharing the same ratio but just in a different scale. With that in mind (and Cheryl’s mentioning of cutting boxes to two-third sizes of each other), I hence decided to do exactly that, in a sort of masochistic, self-spiting way.

Splicing: I neglected to realise that I needed to factor in additional foam for things like wedging or piercing until I actually tried to put the foam together but when I tried to join them without jointing techniques, it seemed poorly executed. So, I tried using only wedging instead.

Prior to doing the second model, I drafted the OSS post for the first one (as seen above). Writing really helps me to sort my thoughts out, and I noticed certain patterns in how I approached it. With this in mind, I decided to try avoiding what I did for the first model, to see what I felt would actually work.

As stated in the brief, students are to cut “at least 12 rectilinear volumes” BEFORE proceeding to organise them. Presumably, this is either a negotiable point, or intended to ensure students avoid the methodical approach of measuring each box and making them already well-placed with each other. Hence, I decided to approach this less methodically, by refraining from doing any initial touch ups, and just picking 3 volumes which looked wildly different: 1 decidedly normal piece, 1 ridiculously slim piece and one looooooooooooooooooong piece.

(I happened to be in possession of many long and slim foams, results of the foam trimming therapy session)

Measurements: I trimmed the subordinate from the start, of course. Afterwards, though, it was still rather big, so I sliced it into nearly half again to reduce the surface area, and wedged it to give the dominant more dominance in the bottom left sketch. (Then, the subdominant was also really long so I trimmed it from about 18.3cm to 15.4cm,)

Hierarchy: Natural problems arose from a too thin subdominant paired with the wide subordinate. If I were to rotate to counteract there wouldn’t be the nice 4-directional pull anymore, so I didn’t really manage to find a solution for this, but since it’s 2/6 sides maybe… It’s.. Passable?

I mean, I prefer this over the other two, so…

I tried to combine elements of both 1 & 2, 1 in actually considering factors like precise measurements; 2 in choosing seemingly “random” pieces (and also the general design, though this time I tried piercing through BOTH pieces than just one to create an “origin”, like XYZ axes typically have).

Measurements: Surprisingly, nothing much. Besides the foam trimming therapy, I did almost nothing.

Hierarchy: I do feel the subordinate is somewhat underwhelming, especially from that one (two) angles where you see practically nothing (0.2×1.05 cm²). However, changing to a different piece might compromise the slenderness I enjoy for the other 4 angles, so…

Purely just the subordinate problem; if I could resolve that, I would pick this over the second one, where the piercing/wedging cut the dominant enough to avoid excessively large, flat planes.

I made some other random stuff in class, but other than aforementioned under the second model, they were all mostly useless, and just cutting/jointing practice. I did make a sailboat with all planes intersecting at one point, which inspired me to try to make an origin point for the third model though!

I’m still vaguely confused as to if we’re supposed to have a critique… Today, or if this is the end of the project, or if we still have time to rework our things, but if I could, I might opt to use some kind of textured, wild surface, one that really emphasises the idea of unflatness. Like… Rock. Or something.