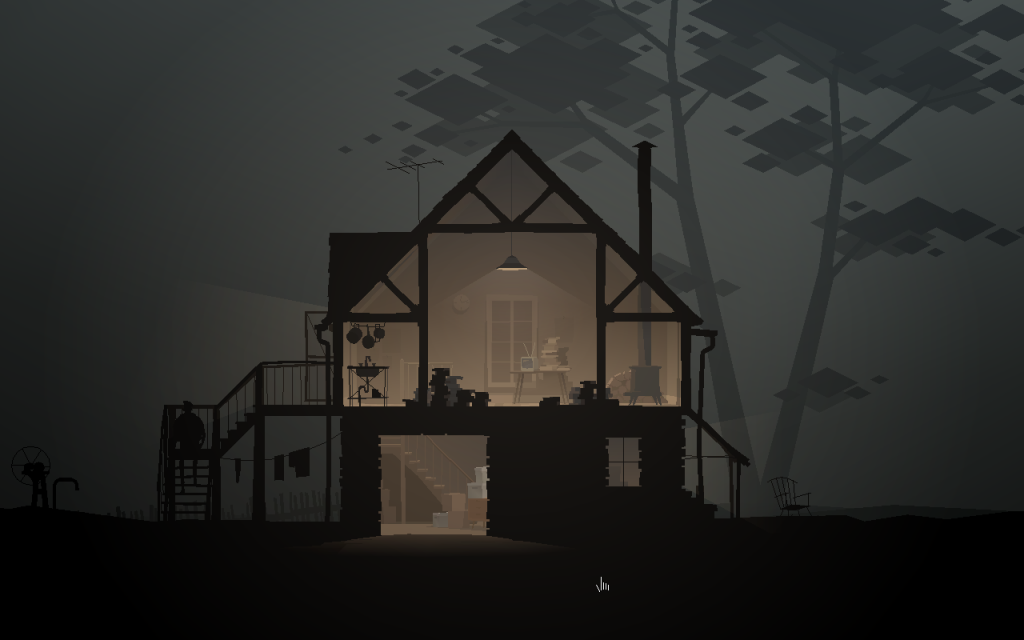 Fish moves towards point but the rotation is off. So it flops lifelessly.

This week I explored the idea Play in Space.

I came across this reading of Eric Zimmerman on the “Narrative, Interactivity, Play, and Games: Four naughty concepts in need of discipline”

Perhaps more than any other one of the four concepts, play is used in so many contexts and in so many different ways that it’s going to be a real struggle to make it play nice with our other terms. We play games. We play with toys. We play musical instruments and we play the radio. We can make a play on words, be playful during sex, or simply be in a playful state of mind.

What do all of those meanings have to do with narrative and interactivity? Before jumping into a definition of play, first let’s try and categorize all of these diverse play phenomena. We can put them into three general categories.

Category 1: Game Play, or the formal play of games
This is the focused kind of play that occurs when one or more players plays a game, whether it is a board game, card game, sport, computer game, etc. What exactly is a game? We’re getting to that soon.

Category 2: Ludic activities, or informal play
This category includes all of those non-game behaviors that we also think of as “playing:” dogs chasing each other, two college students tossing a frisbee back and forth, a circle of children playing ring-around-the-rosy, etc. Ludic activities are quite similar to games, but generally less formalized.

Category 3: Being playful, or being in a play state of mind
This broad category includes all of the ways we can “be playful” in the context of other activities. Being in a play state of mind does not necessarily mean that you are playing – but rather that you are injecting a spirit of play into some other action. For example, it is one thing to insult a friend’s appearance, but it is another thing entirely if the insult is delivered playfully.

Quick structural note: the later categories contain the earlier ones. Game play (1) is a particular kind of ludic activity (2) and ludic activities (2) are a particular way of being playful (3). But what overarching definition could we possibly give to the word “play” which would address all of these uses?

The definition: How about:

That sounds quite abstract and obtuse for a fun-loving word like “play,” doesn’t it? But it is actually quite handy. This definition of play is about relationships between the elements of a system. Think about the use of the word “play” when we talk about the “free play” of a steering wheel. The free play is the amount of movement that the steering wheel can turn before it begins to affect the tires of the car. The play itself exists only because of the more utilitarian structures of the driving–system: the drive shaft, axles, wheels, etc.

The idea draws from a child’s mind of a playscape. What makes a landscape something playful? An empty void deck can be a playscape, you just need a friend or two to play catching. A playground is boring if no one wants to play in it. The interaction creates the play, not the other way round.

Similarly, a few fans and a balloon doesn’t make a space interactive. Its’ how we push the medium and think out of the box.
Why are we told not to stand on tables?  Is it rude? Is it dangerous? We’re told so when we are kids and when we become adults, it gets embedded in the back of our minds.

Yet, why not explore it? How can we change the space just simply by ignoring certain social construct? Space itself is a social construct. If we are to be kids, we need to unlearn these rules that were placed on us and question. 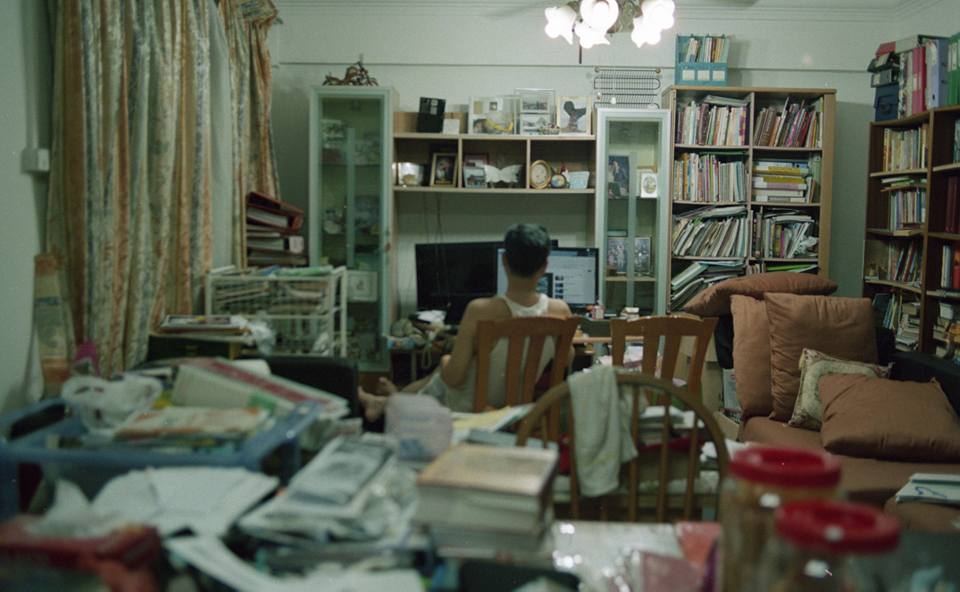 At this moment, I’m thinking of creating a mixed media installation.

The passive narrative happens at the side of the walls, with projectors showing photos.

These are images that I’ve collected over the weeks before the death of my aunt.

These are images I tried to capture.

At the center of this installation is a game.

The game is a simple simulation of choice.

What would you do if you have 6 days left to spend with someone you love?

In a given scenario maybe you find yourself having to choose between a sick daughter and a dying mother.

While I guess this game would have some  interest, it would be difficult to create a work like this without it feeling overly manipulative. Getting the player to be emotionally involved also makes it challenging. 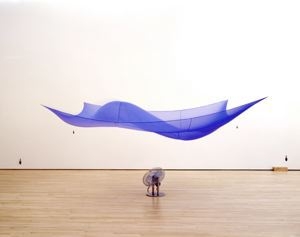 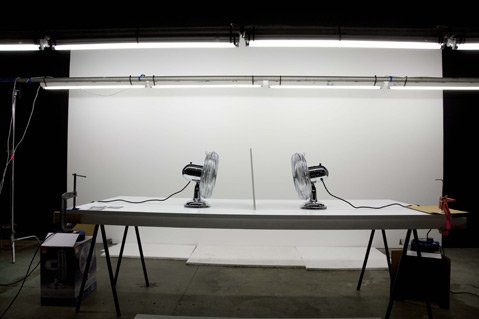 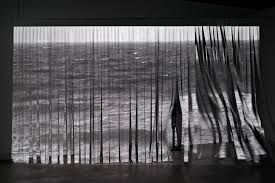 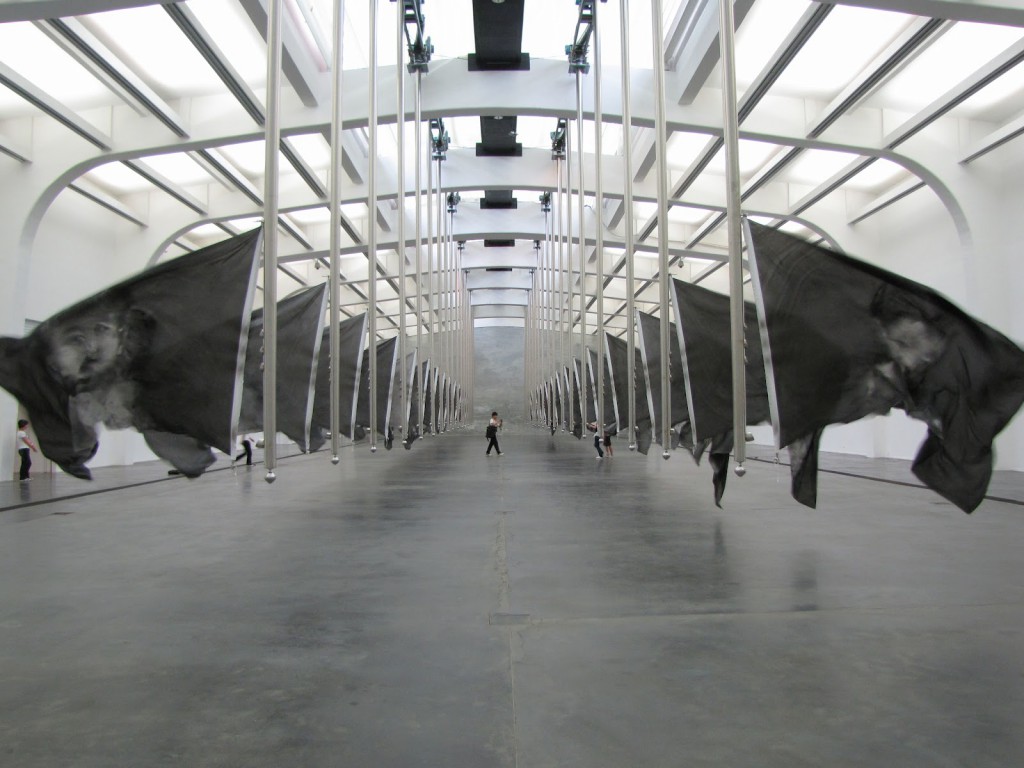 One of the greatest challenge I face with my project it trying to put all the separate pieces together.

The means of creating the work is an important process, but what am I delivering in the final product is what makes me feel the most worried about.

The project has undoubtedly taken a detour.

Not only on what to do with my project, but also how do I move on from here.

How do we move on from here.

I think…I’m not ready for the answers…

“In a riddle whose answer is chess, what is the only prohibited word?”

I thought a moment and replied, “The word chess.”

“On page 22 of Liddell Hart’s History of World War I you will read that an attack against the Serre-Montauban line by thirteen British divisions (supported by 1,400 artillery pieces), planned for the 24th of July, 1916, had to be postponed until the morning of the 29th. The torrential rains, Captain Liddell Hart comments, caused this delay, an insignificant one, to be sure. “

Immediately, it hooks you into this work of non-linearity, a reading unlike anything I have ever encountered. One that recognize itself as a reading and uses this mechanics of breaking the fourth wall as part of it’s narrative.

The word ‘Time’ , as Albert puts it, is prohibited because it is exactly what the reading is about.

I found this idea so intriguing, this idea that we can convey the theme by omission, it sparked an idea for my own project. ( But more on that later.) This form of story-telling ran parallel to the “Adventure books” that I played when i was a child.

Yet it managed to capture something so poetic that these “Adventure books” never manage to, the idea of time as a mechanics .

The plot itself was very compelling too. In a earlier part of the story after Doctor Albert had revealed his understanding of the book as the labyrinth, it was hinted that Doctor Tsun will arrive at his house, once as an enemy and once as a friend.

“The rest is unreal, insignificant. Madden broke in, arrested me. I have been condemned to the gallows. I have won out abominably; I have communicated to Berlin the secret name of the city they must attack. They bombed it yesterday; I read it in the same papers that offered to England the mystery of the learned Sinologist Stephen Albert who was murdered by a stranger, one Yu Tsun. The Chief had deciphered this mystery. He knew my problem was to indicate (through the uproar of the war) the city called Albert, and that I had found no other means to do so than to kill a man of that name. He does not know (no one can know) my innumerable contrition and weariness.”

As a spark of an idea, i wonder if it’s possible to craft a mix medium narrative using game, writing and even photos? Would that be an appealing narrative? 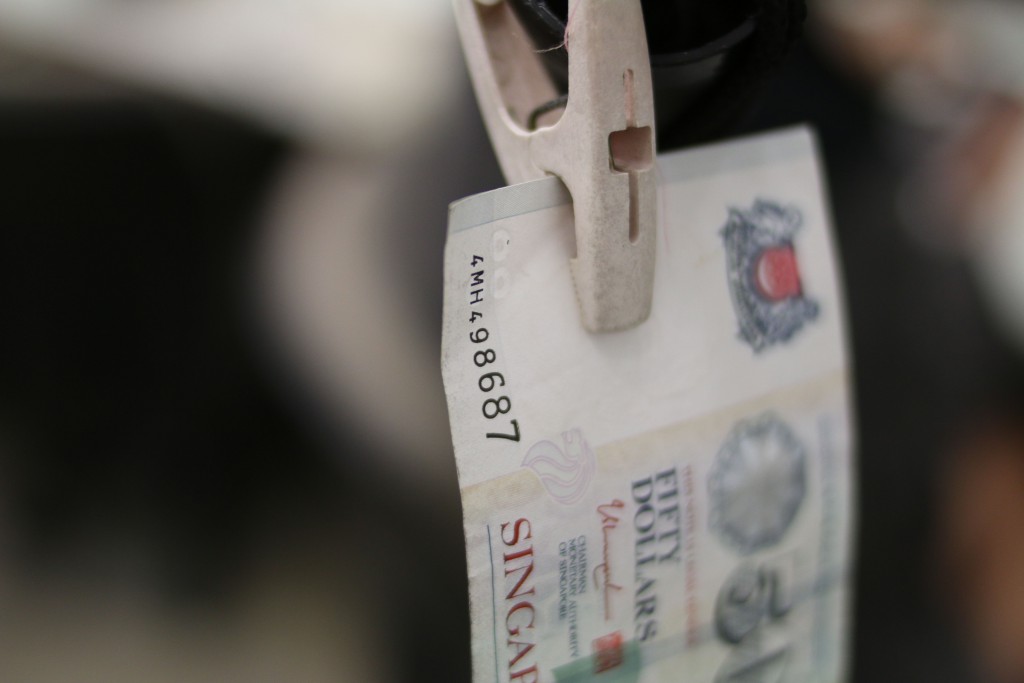 The artwork aims to make a statement on the irony of motivation.

Many of us have experienced this before. We are obsessed with this idea of  achieving something that we tunnel vision. In the midst of this rat race, we lose sight of what around us.

I think this idea can be pushed even more. Is it just money that causes this short sightedness, can this also be a result of things place in front of us to misdirect us.

When we think about the media, even social medias like Facebook, how much of the information we receive is carefully constructed to let us see only what they want us to see? How much of what we know is a result of knowledge being hidden from us?

I think it is also interesting that we cannot see where we are heading towards when this tunnel vision occur. I wanted to mock this idea of blinding motivation because even though we are chasing this goal or this object, we will never reach it.  We are merely chasing something that is futile. We look absolutely ridiculous if all we ever do is to chase this futile thing. 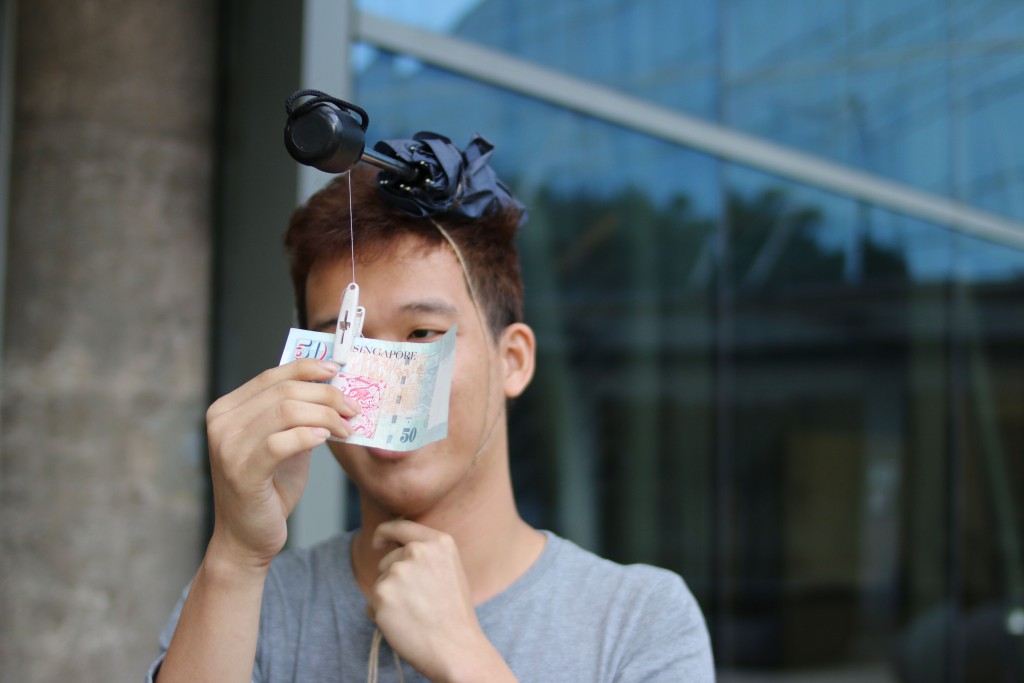 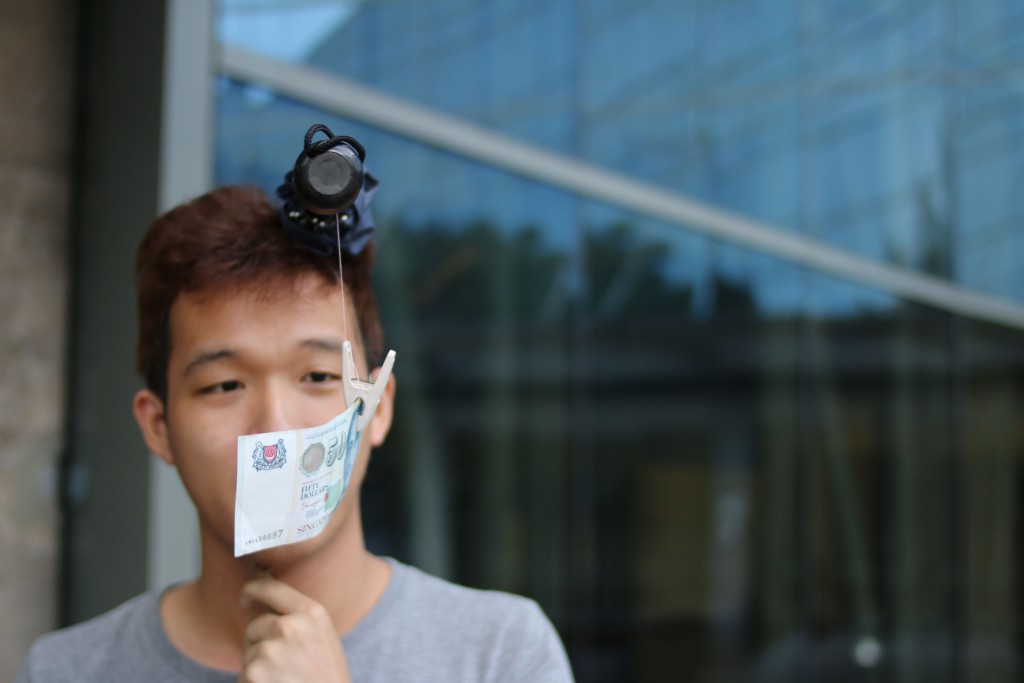 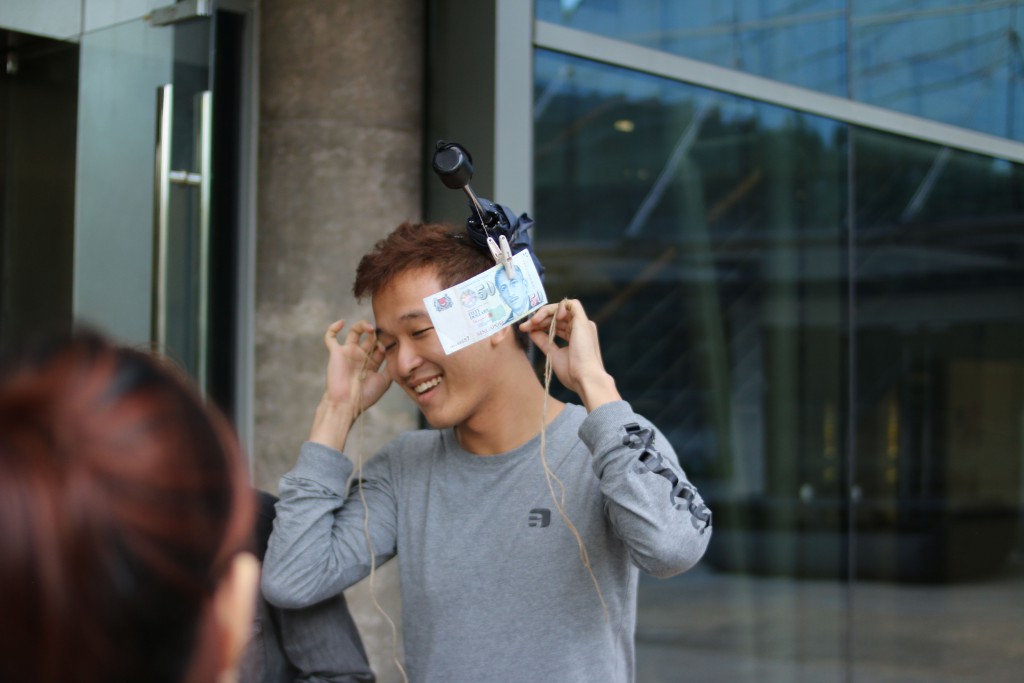 (In all honesty , I did not anticipate exactly how ridiculous it looks though to put an umbrella on  my head. )

I think that while I did think about the concept, the execution of the project could have felt a little more solid . I love the idea of changing how our eyes perceive certain things by simply placement of an object. I love how we can draw parallels between what happens physically to our body and what happens in life. I love the metaphors that we can use to help us understand certain choices better and in the midst of this occlusion and distortion, maybe even see a little clearer.

The filter effect was not what I expected.

That’s fine, I have another concept to play with…

Putting an item in front of you to distract you.

I want to create a device that will be placed in front of you. 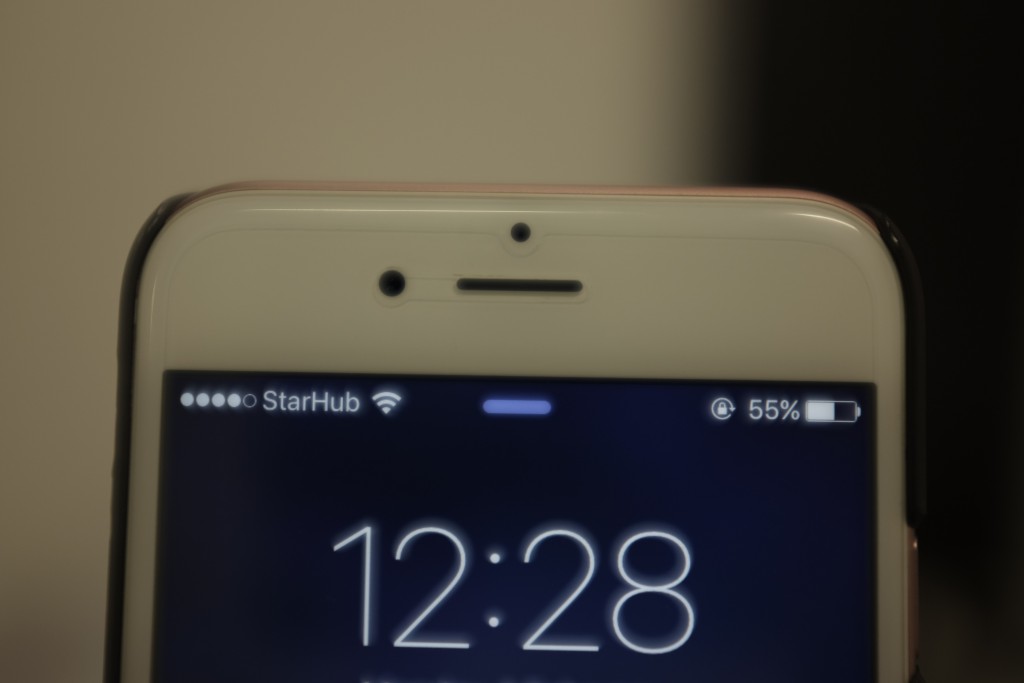 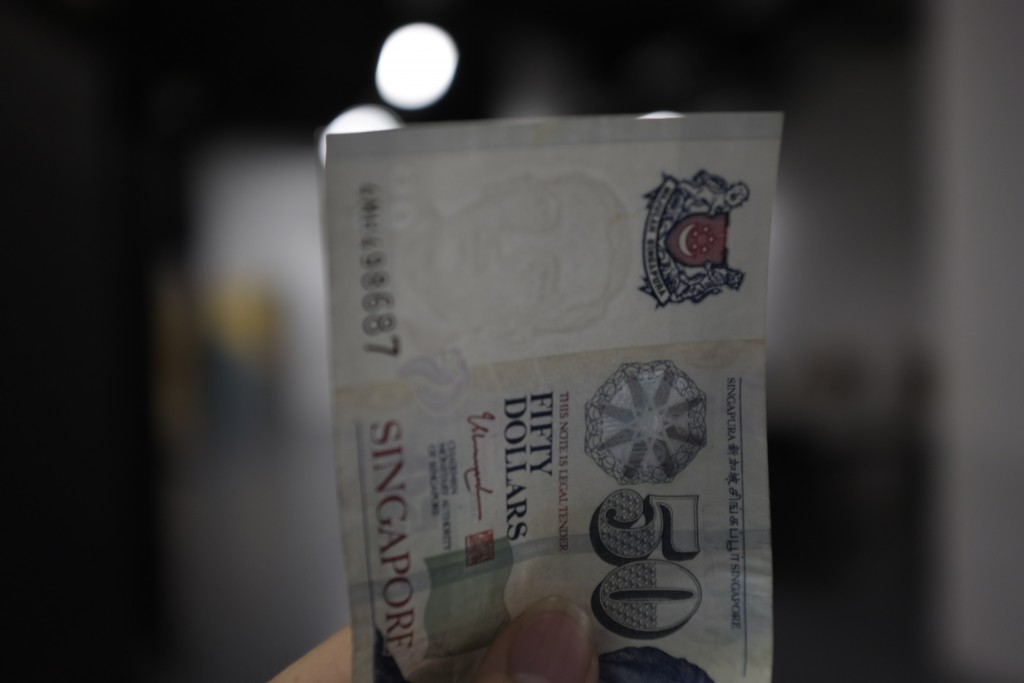 The core idea  of this is that we are motivated by what we see in front of us. At the same time everything else is blurred out. I had this idea when something was place in my view and my vision just blurred out and focused at it.

When I was young, my aunt would ask

I believe she also does it cause it makes us happy.

Occasionally, I hear Mom talking on the phone…

“She hasn’t been sleeping well?”

I know she is in pain cause she is constantly on morphine. She also gets more and more breathless each time we visit her.

The last time she could barely finish her sentence…

Yet, each time we visit…

And she would reply, 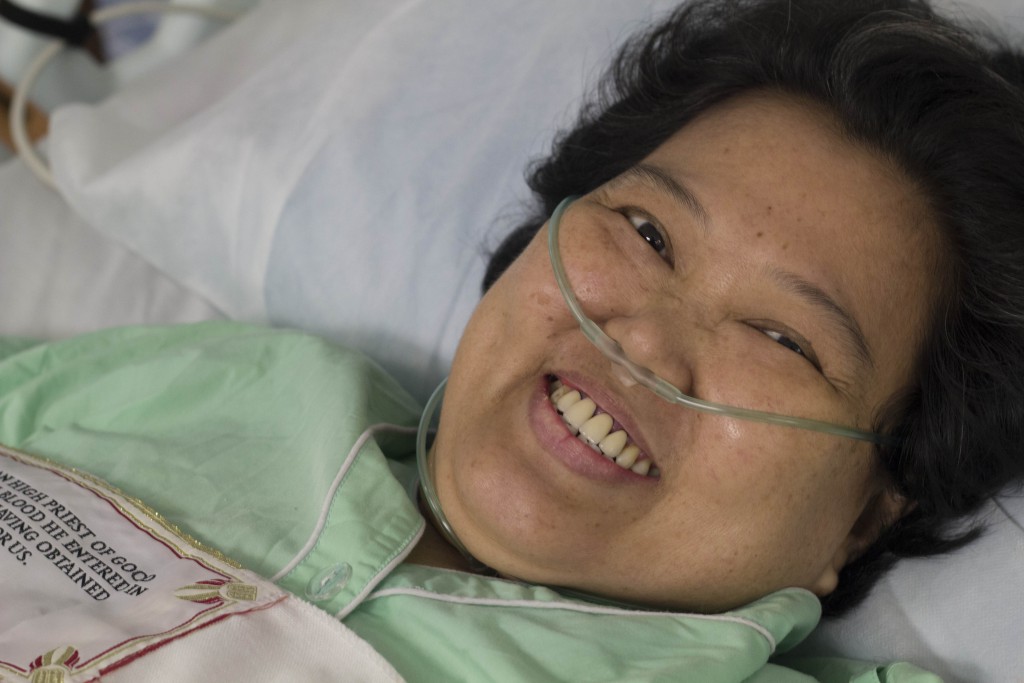 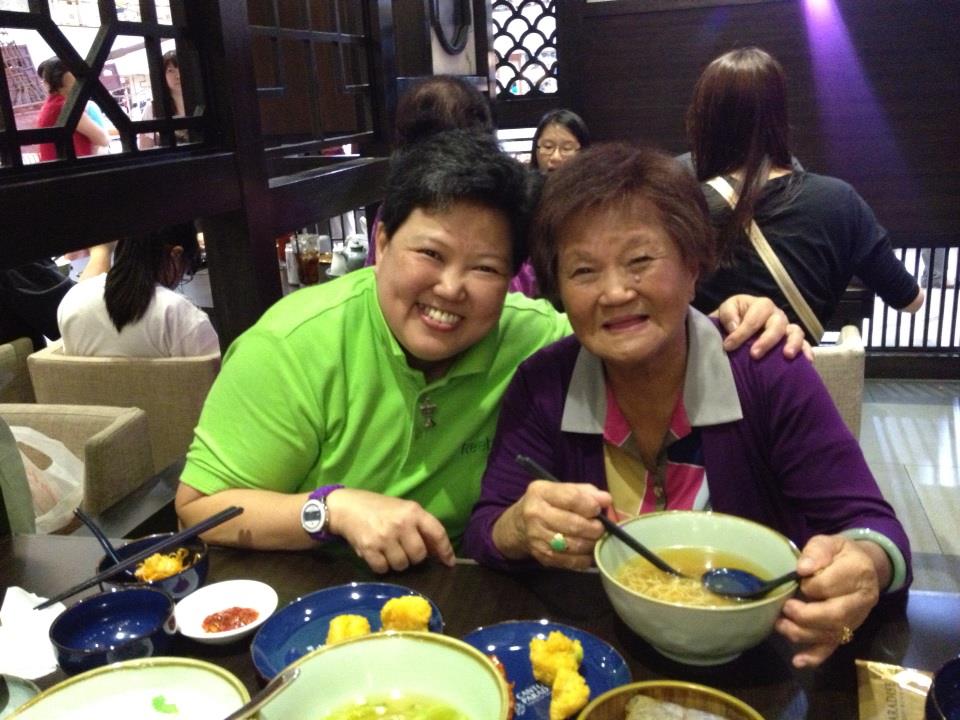