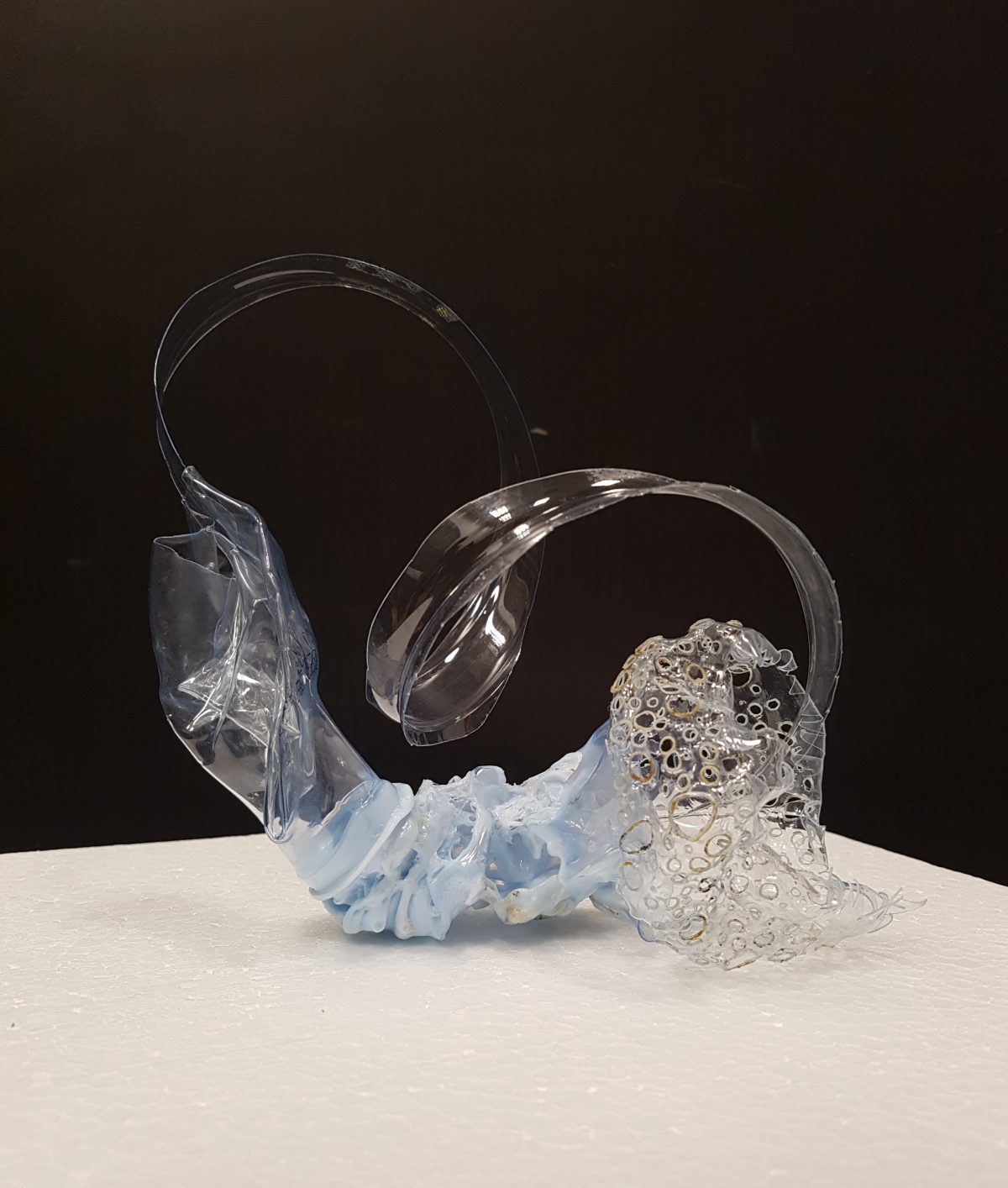 A plane is an element that has surface direction and slant unaccompanied by mass. And there are two- and three-dimensional planes. 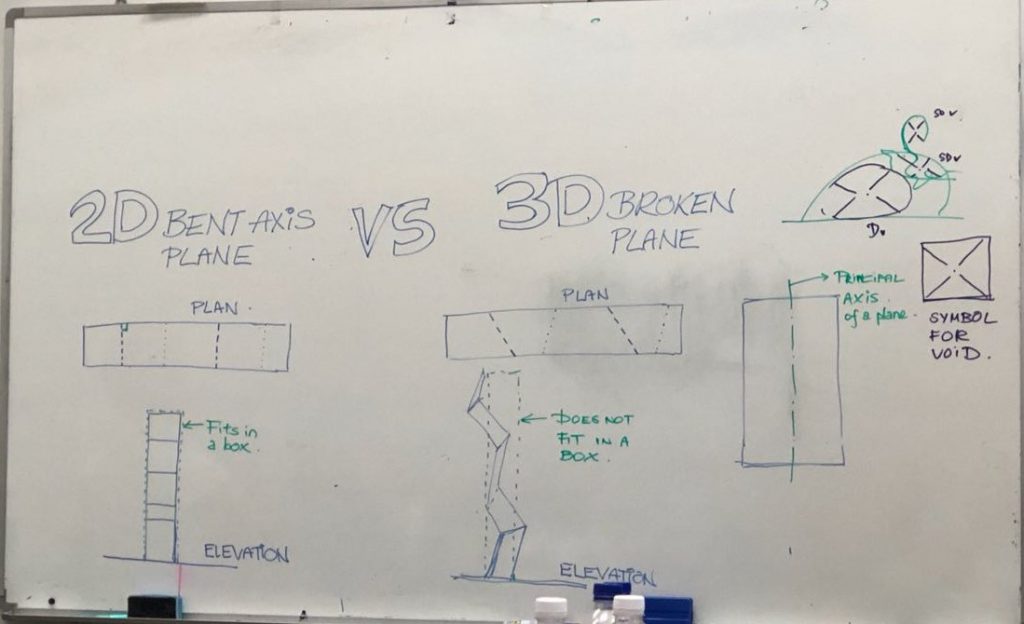 The first part of this assignment requires us to make us of 3D and 2D planes to create an interesting visual composition. The planes are cut from art-board and each strips measure from 8 cm to 0.5 cm in width.

Things to note when doing the models: 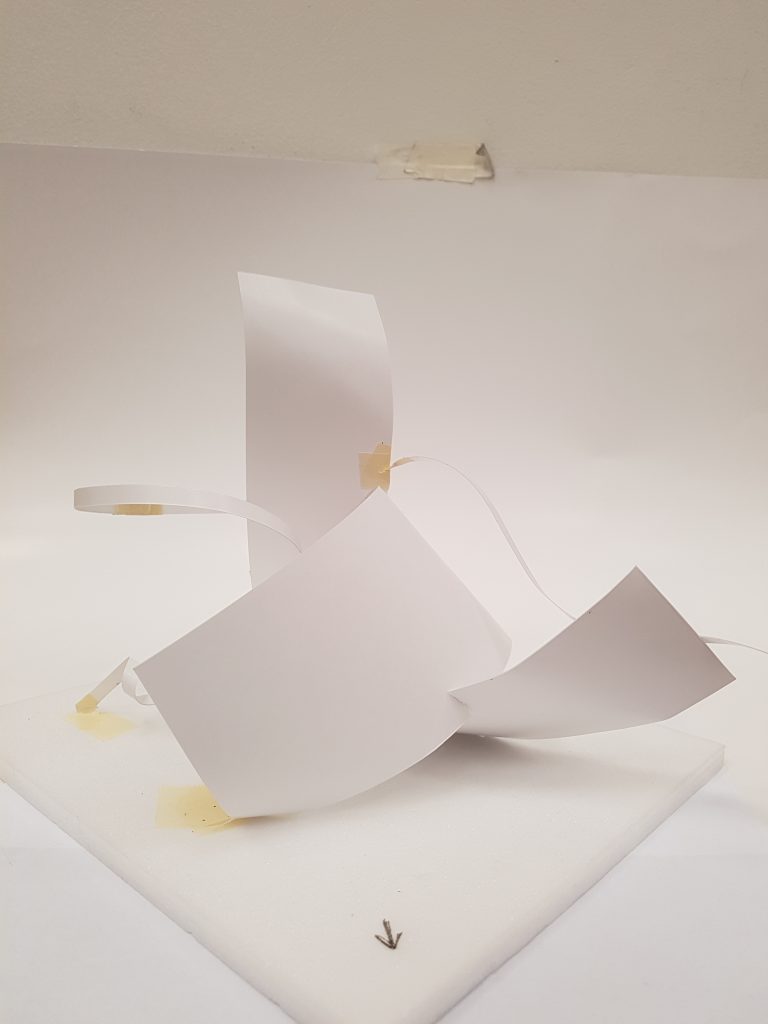 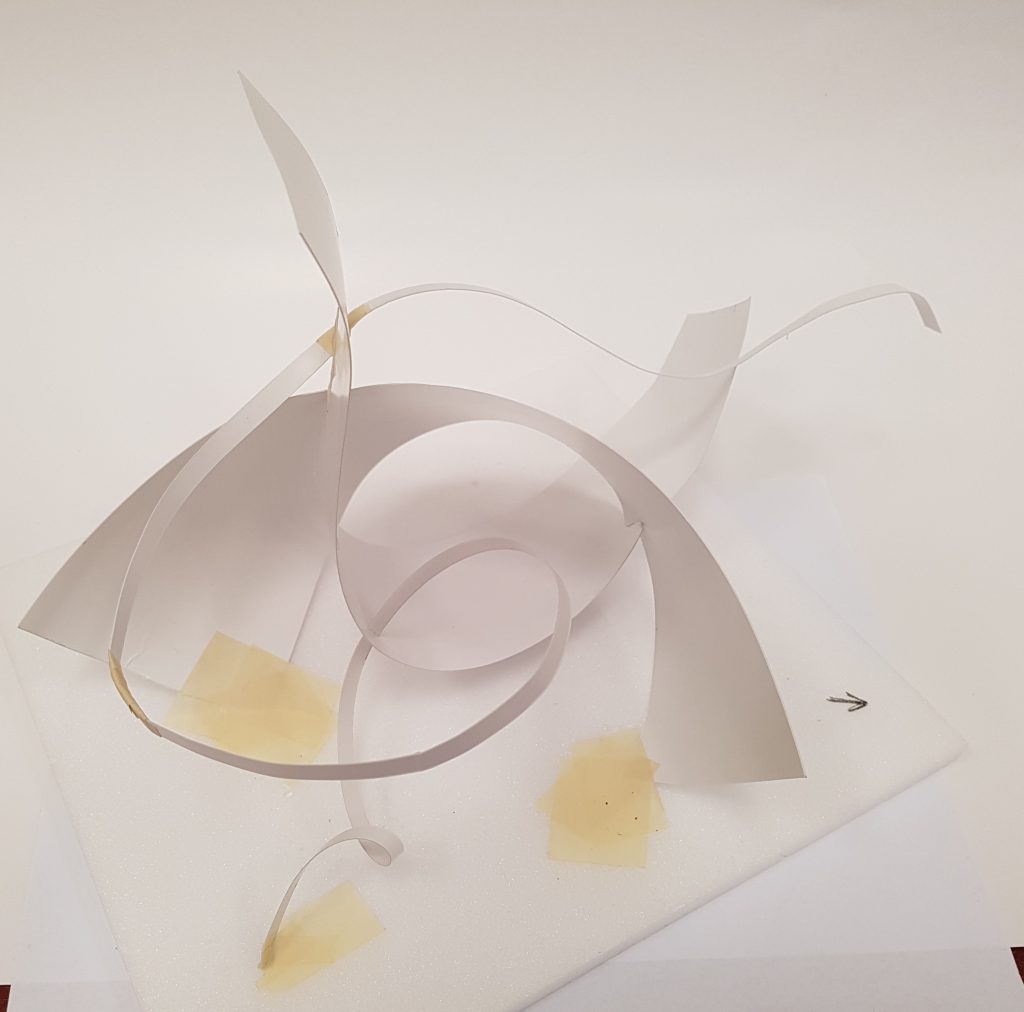 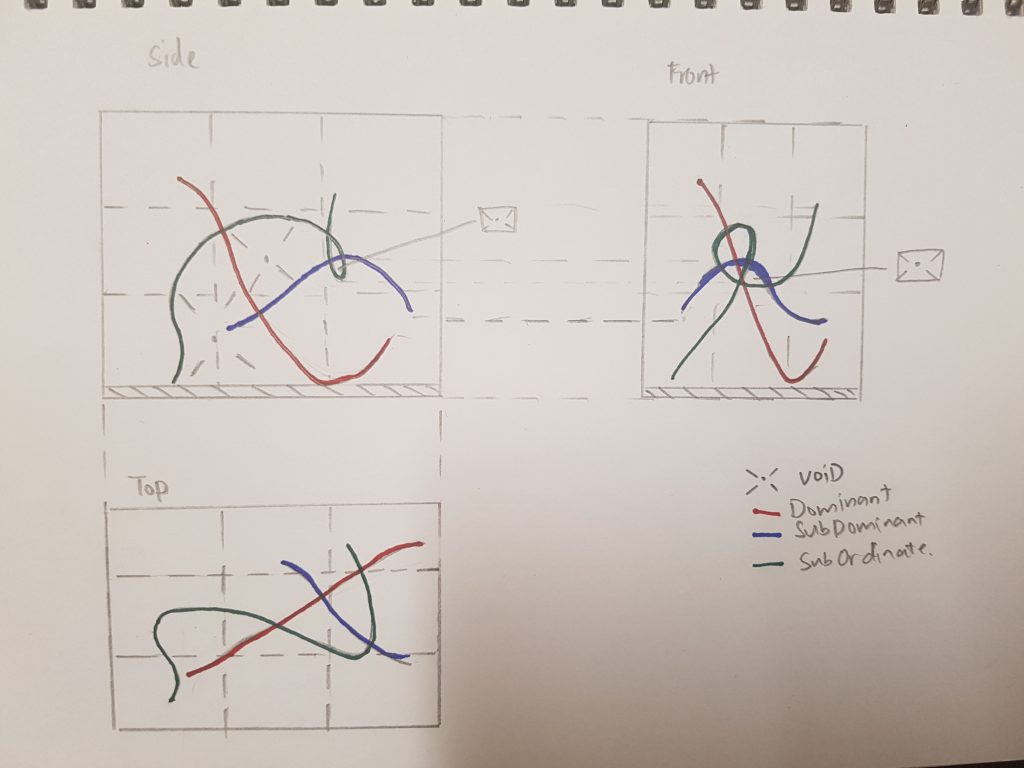 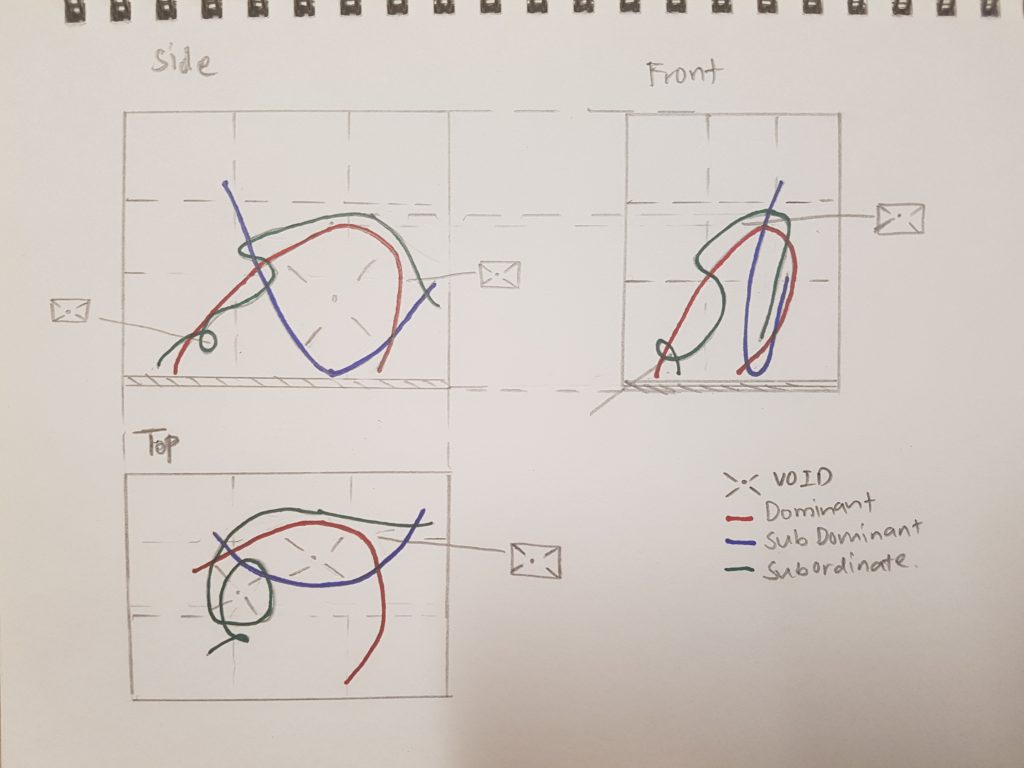 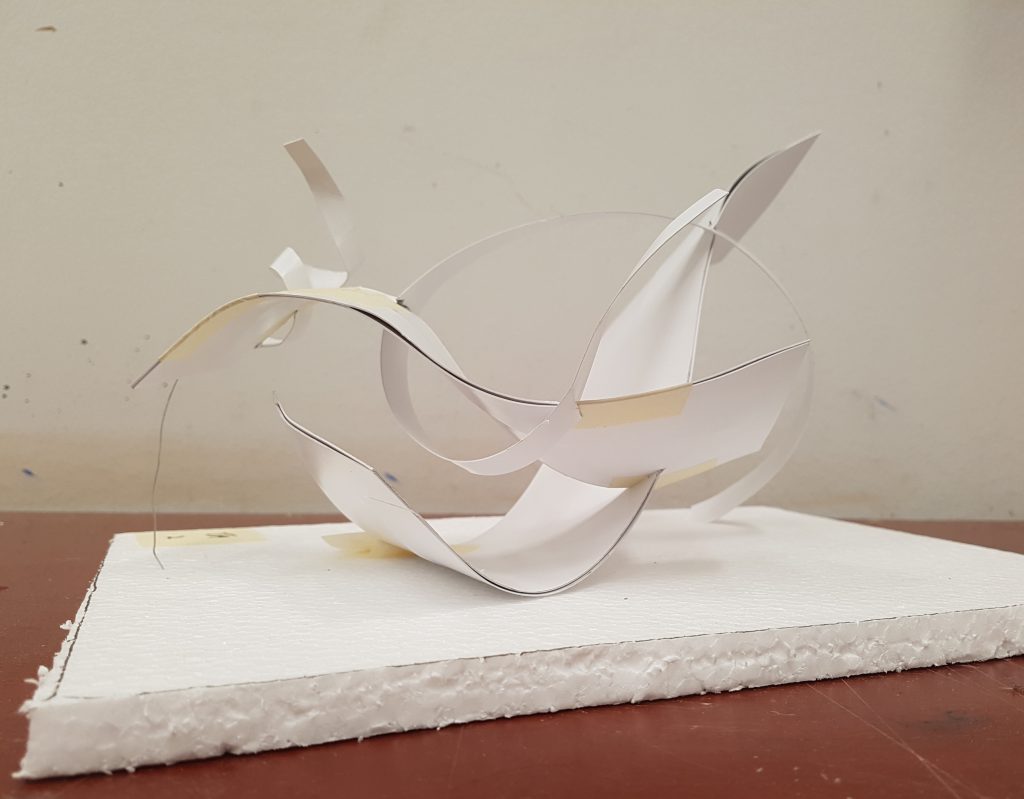 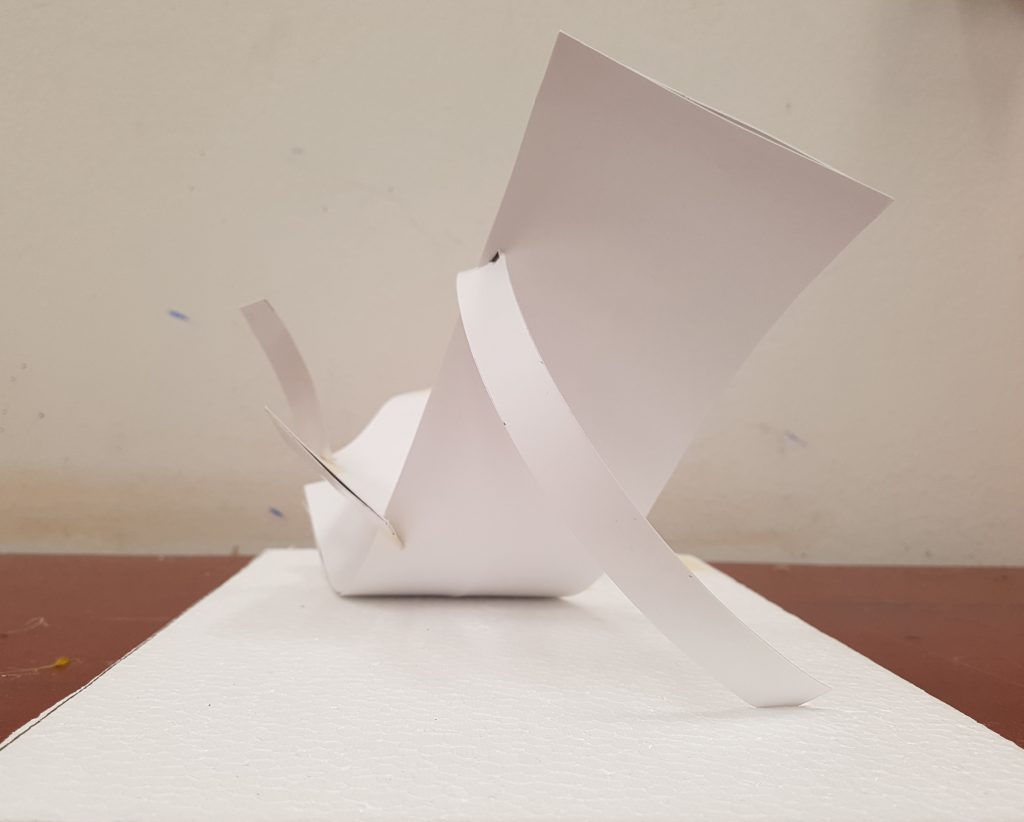 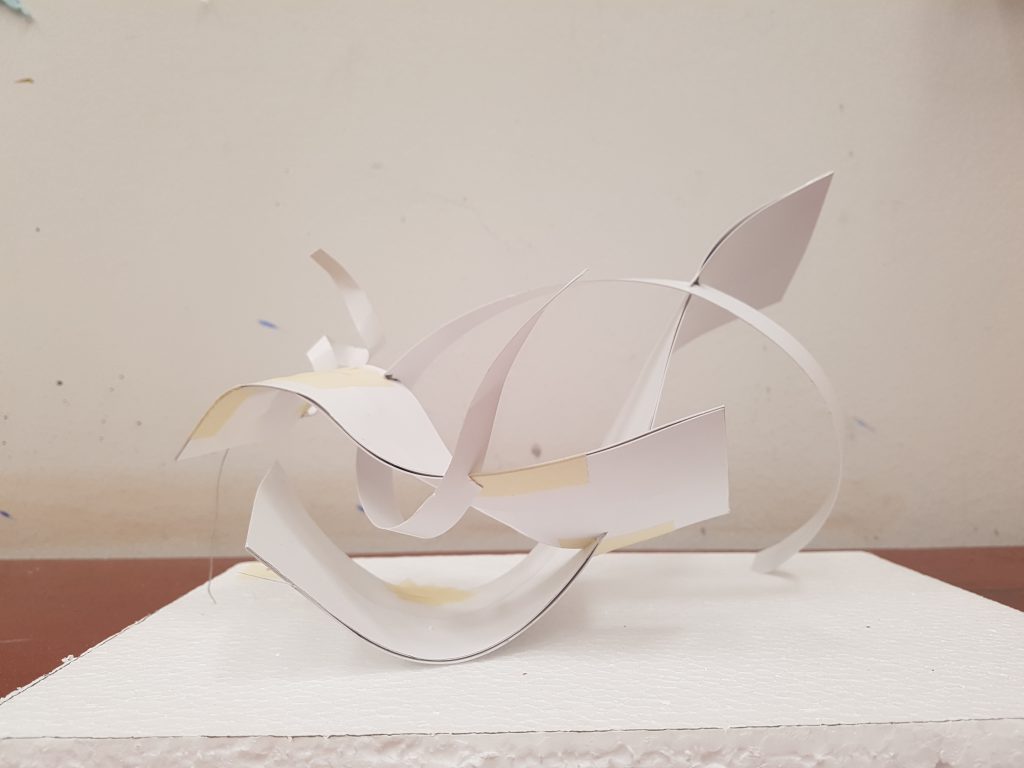 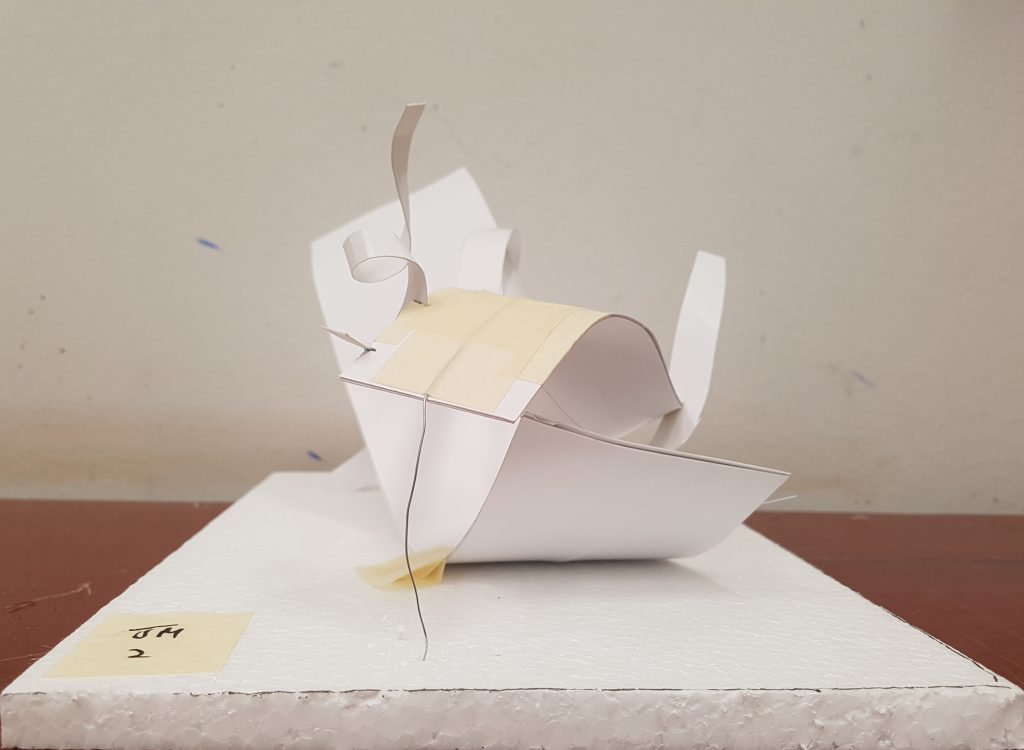 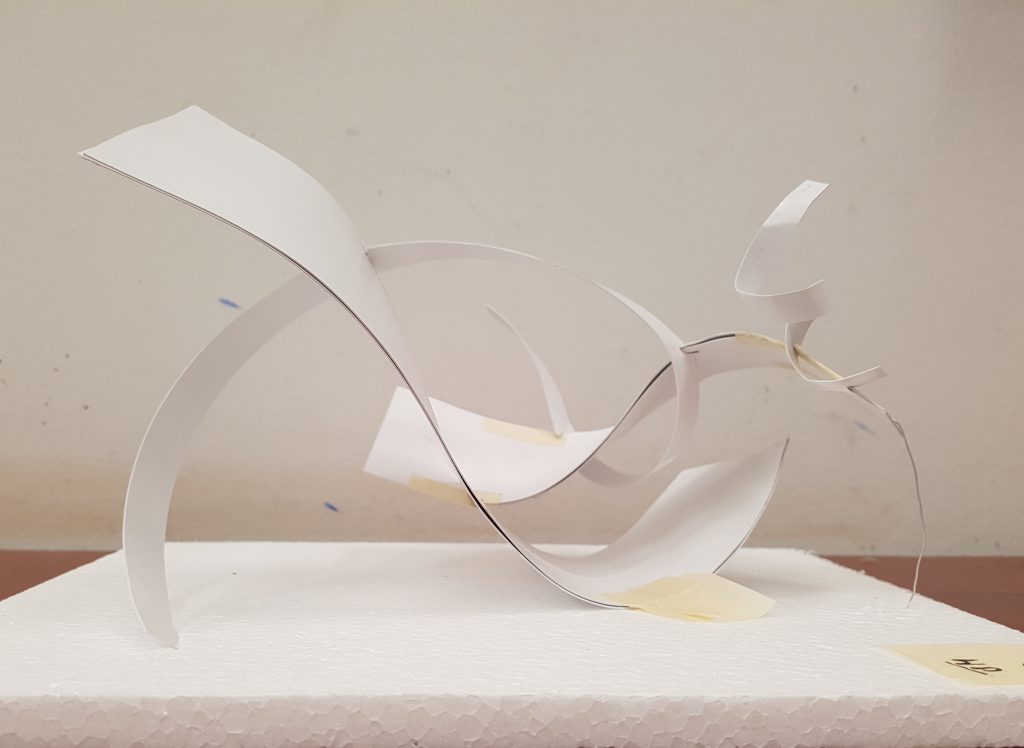 Model 1 has 4 different elements – 1 Dominant, 2 Sub-dominant and 1 Sub-ordinate. Each planes have contrasting proportions and extends in different directions. When viewed, the dominant plane acts as a stationary while the 2 sub-dominant planes curl and warp around it creating voids between the 2 elements. The sub-ordinate is added to fill up the emptiness at the front making it look more visually interesting. 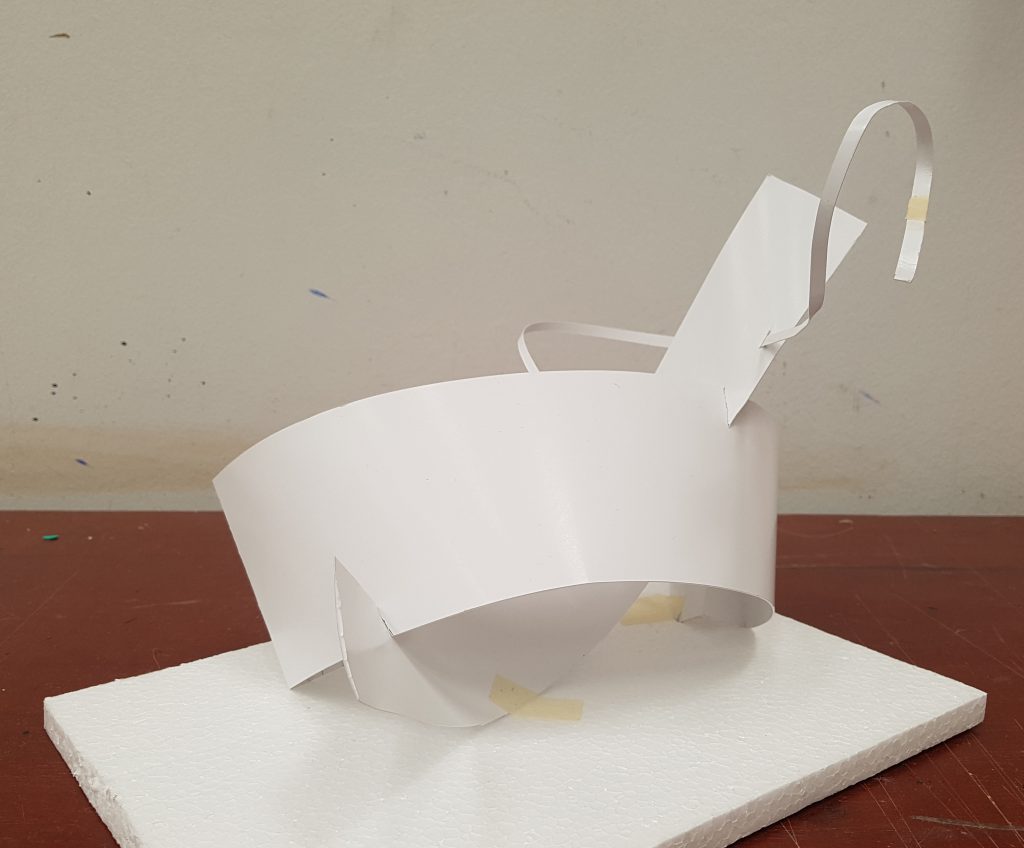 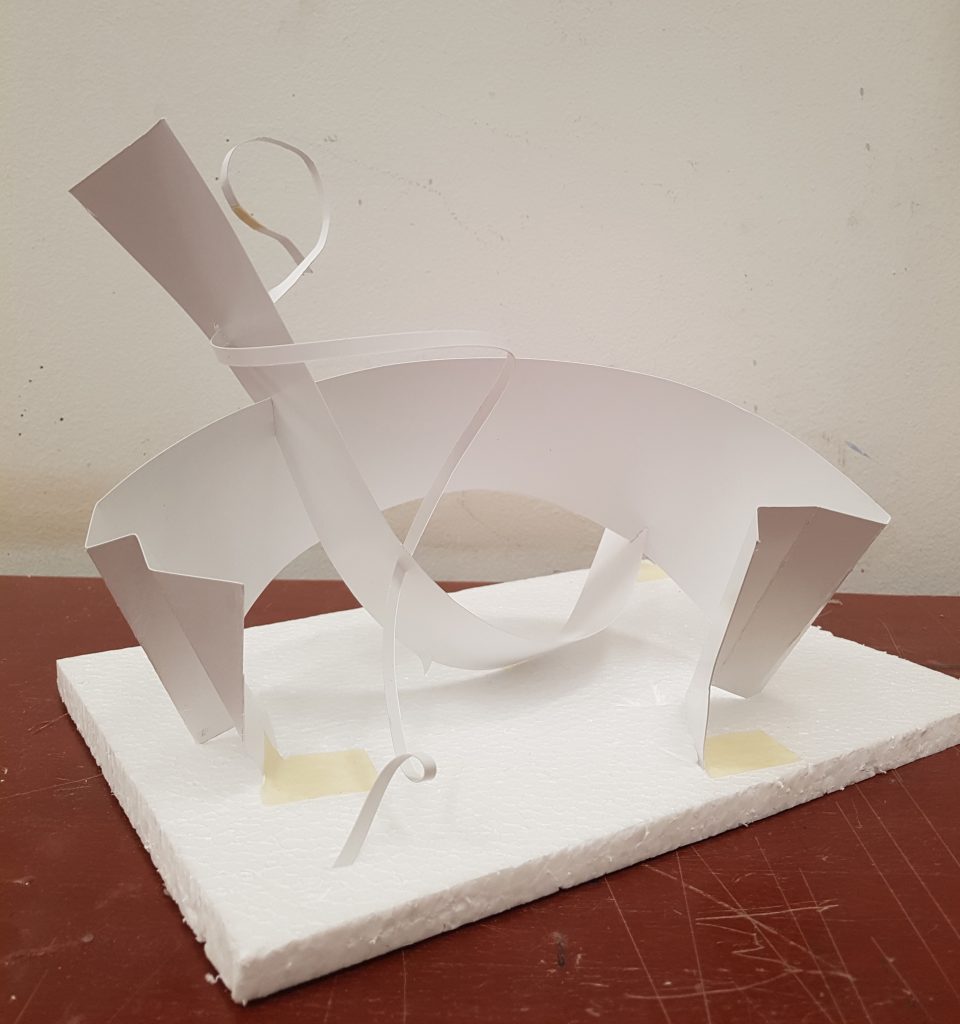 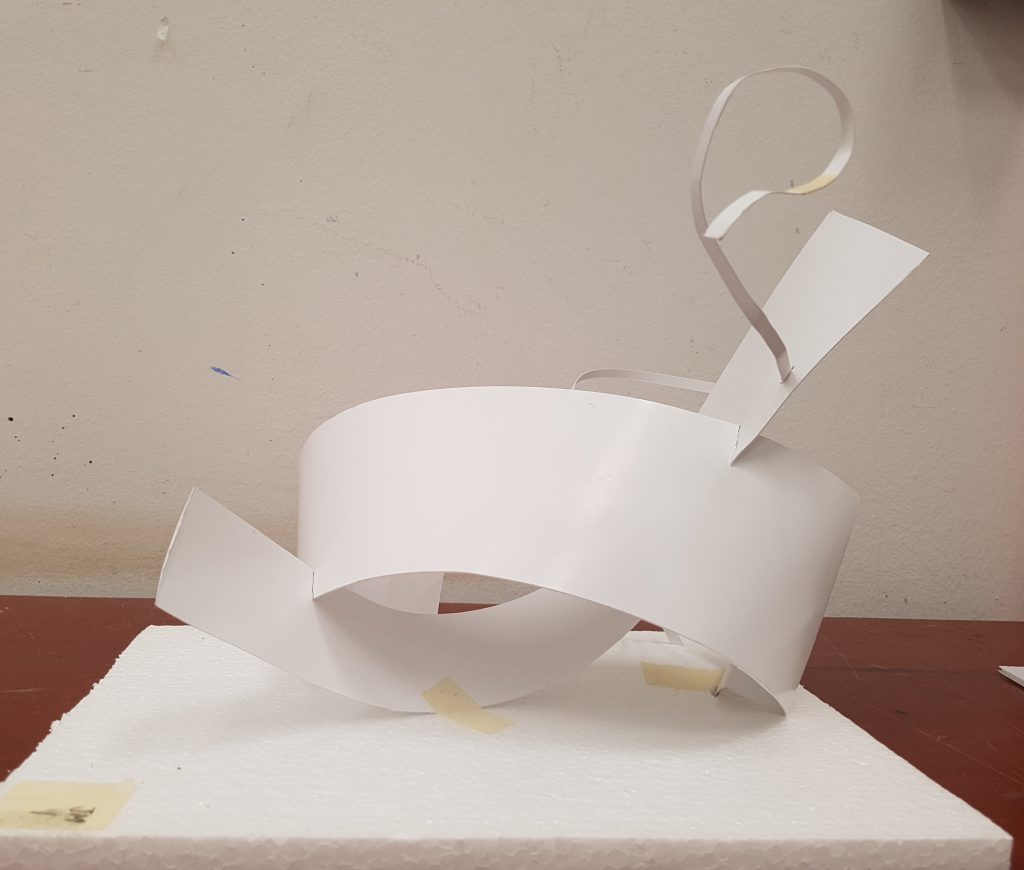 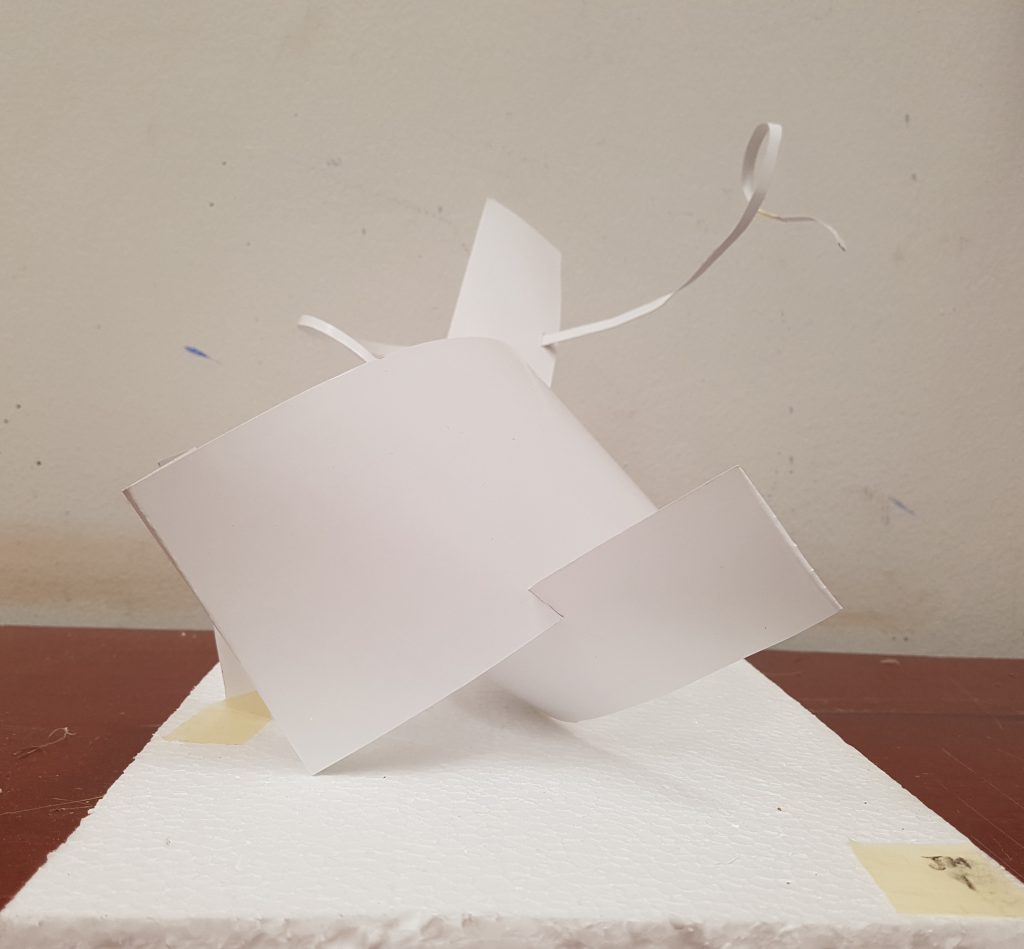 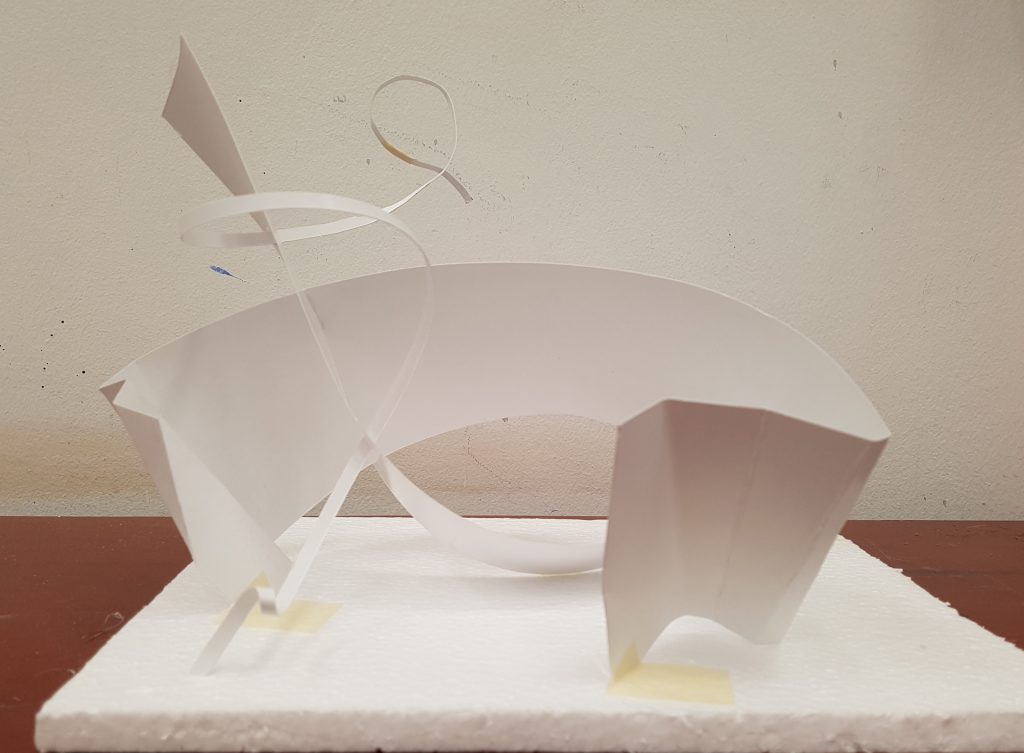 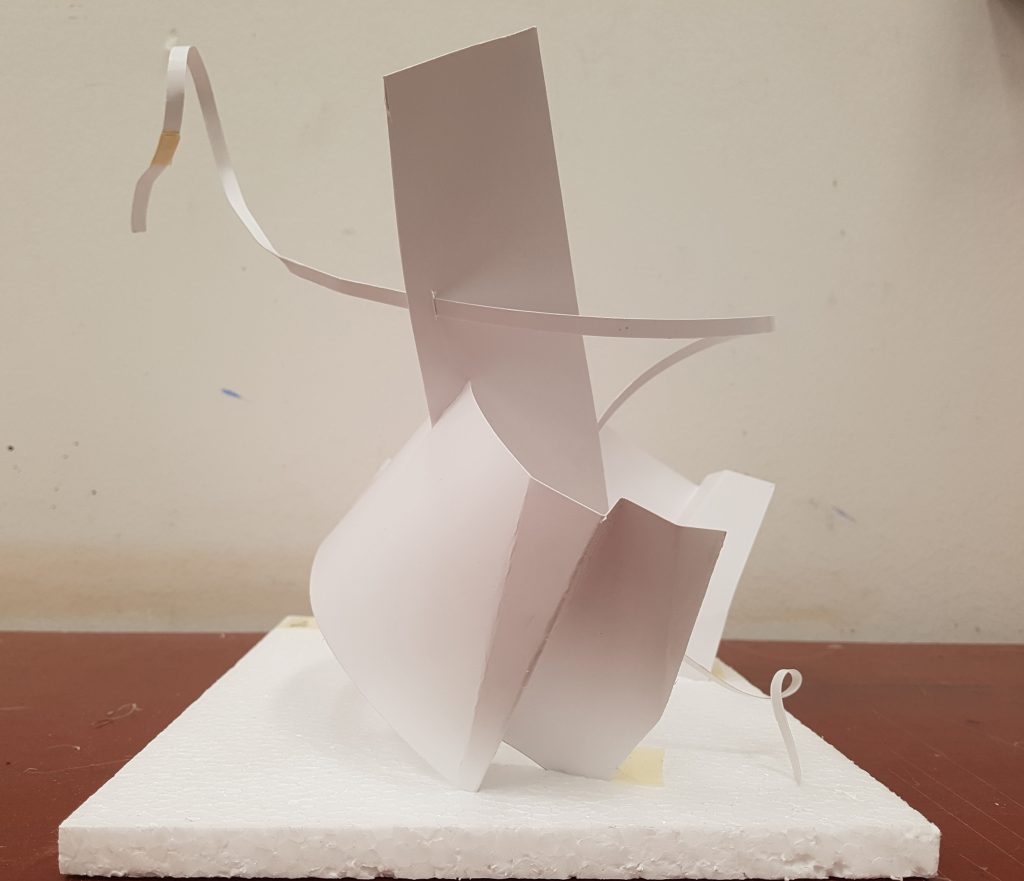 Smell belongs to one of the five senses that we humans have. We use our nose to smell and by definition it means the power to perceive odors or scents by using our nose. According to science, smell is relatively more capable of triggering certain emotions and memories than our other senses.

Incoming smells are first processed by the olfactory bulb, which starts inside the nose and runs along the bottom of the brain. The olfactory bulb has direct connections to two brain areas that are strongly implicated in emotion and memory:  the amygdala and hippo-campus. And our visual, auditory and tactile information does not pass through these 2 brain areas hence explaining why smell is so capable of triggering certain emotions and memories.

According to https://psychcentral.com/lib/memory-and-mnemonic-devices/ , Mnemonic devices are techniques a person can use to help them improve their ability to remember something. In other words, it’s a memory technique to help your brain better encode and recall important information.

Some of the Mnemonic techniques include:

Chunking is simply a way of breaking down larger pieces of information into smaller, organized “chunks” of more easily-managed information. 10 digits broken into 3 chunks, allowing almost everyone to remember an entire phone number with ease.

Organizing information into either objective or subjective categories also helps. If you can divide a list of items into a fewer number of categories, then all you have to remember is the categories (fewer items), which will serve as memory cues in the future.

THE METHOD OF LOCI

It’s based on the assumption that you can best remember places that you are familiar with, so if you can link something you need to remember with a place that you know very well, the location will serve as a clue that will help you to remember. You go through a list of words or concepts needing memorization, and associate each word with one of your locations.

For this assignment, we were required to bring 2 smells that bring back both pleasant and unpleasant memories.

The smell of the groundsheet brings me back unpleasant memories. It has a very distinct “Plasticky” smell and the smell reminds me of my time back in the National Service. The smell of the groundsheet becomes a reminder for me to move out field and to sleep in the forest. It also reminds me of a time when I had to build a shelter with my team mate but we were unable to get it set up properly hence when it rained in the middle of the night, we were drenched and cold and were unable to sleep. 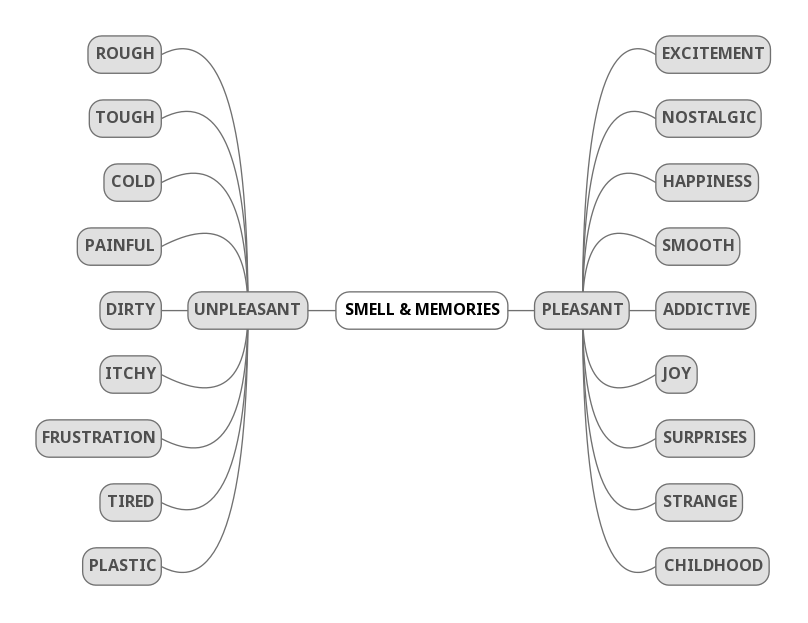 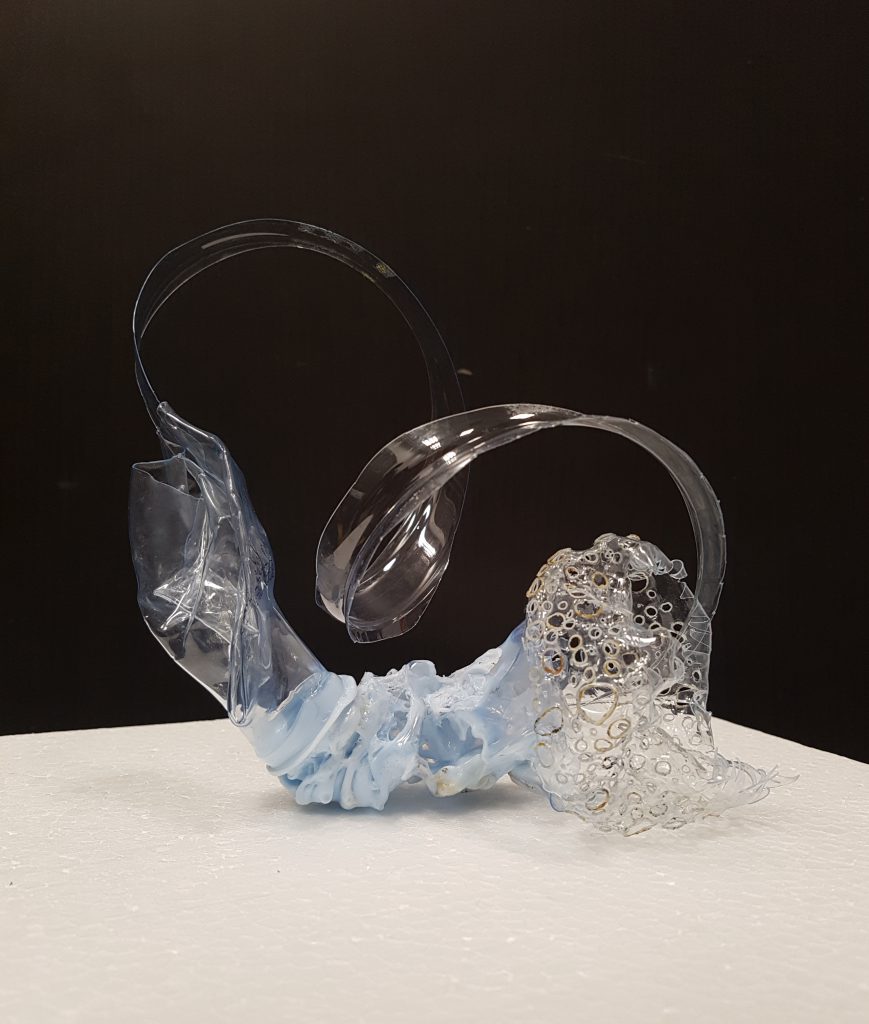 The model is first viewed from the bottom portion of the model. As the saying goes, “bad memories are easier to remember”, therefore I wanted to create something that is striking compared to the other parts of the model. The main idea that I was trying to bring out was the idea of irritation which was the unpleasant memory I had when I smell my groundsheet. To create this, I cut out sharp edges and poked many holes and used the heat gun to make it curl to an organic shape. Hence when viewed, the Aichmophobic edges and Trypophobic holes gives out a sense of irritation, the idea that you do not even want to touch or see it. 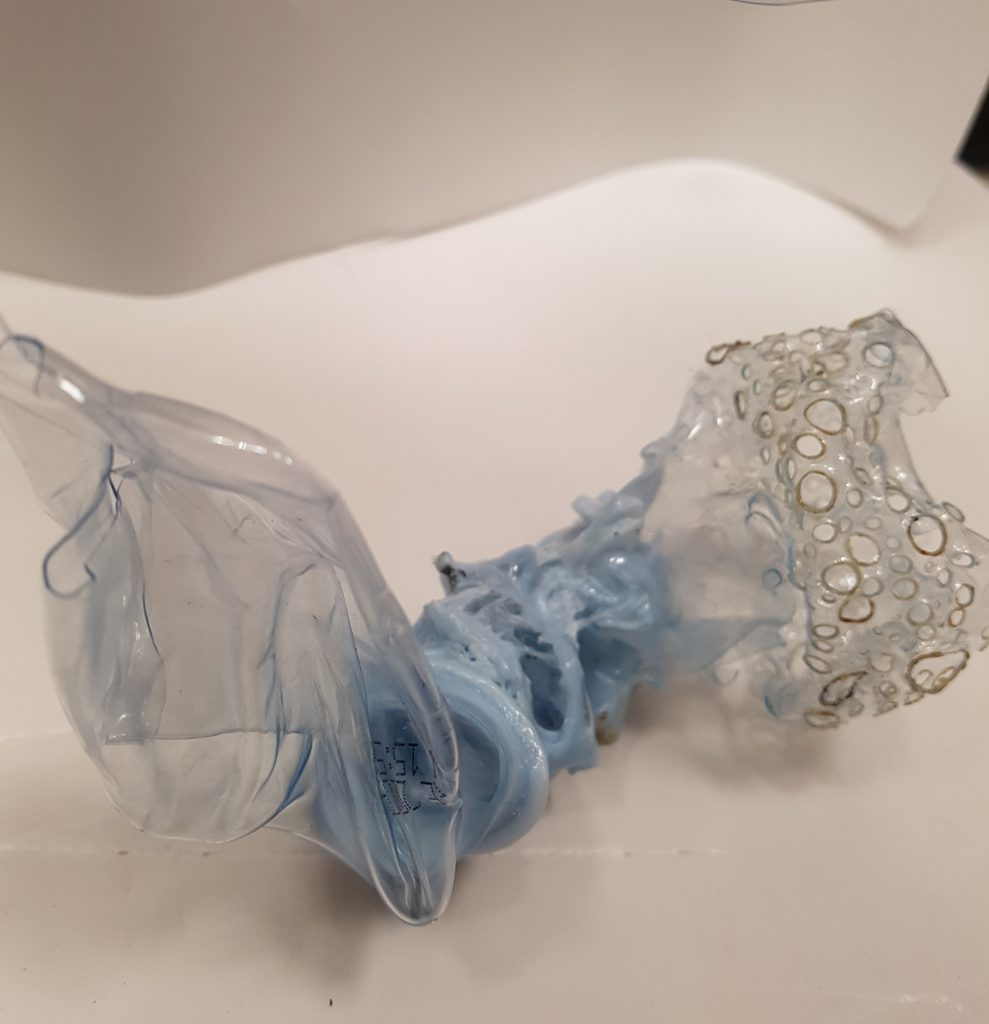 The “unpleasant memory” is then connected to a twisted form which was created by twisting and melting 2 different plastic parts together. It acts as a bridge fusing 2 of my smells and memories together. At the other end of the form comes a thin piece of planar plastic which protrudes out from the opening. 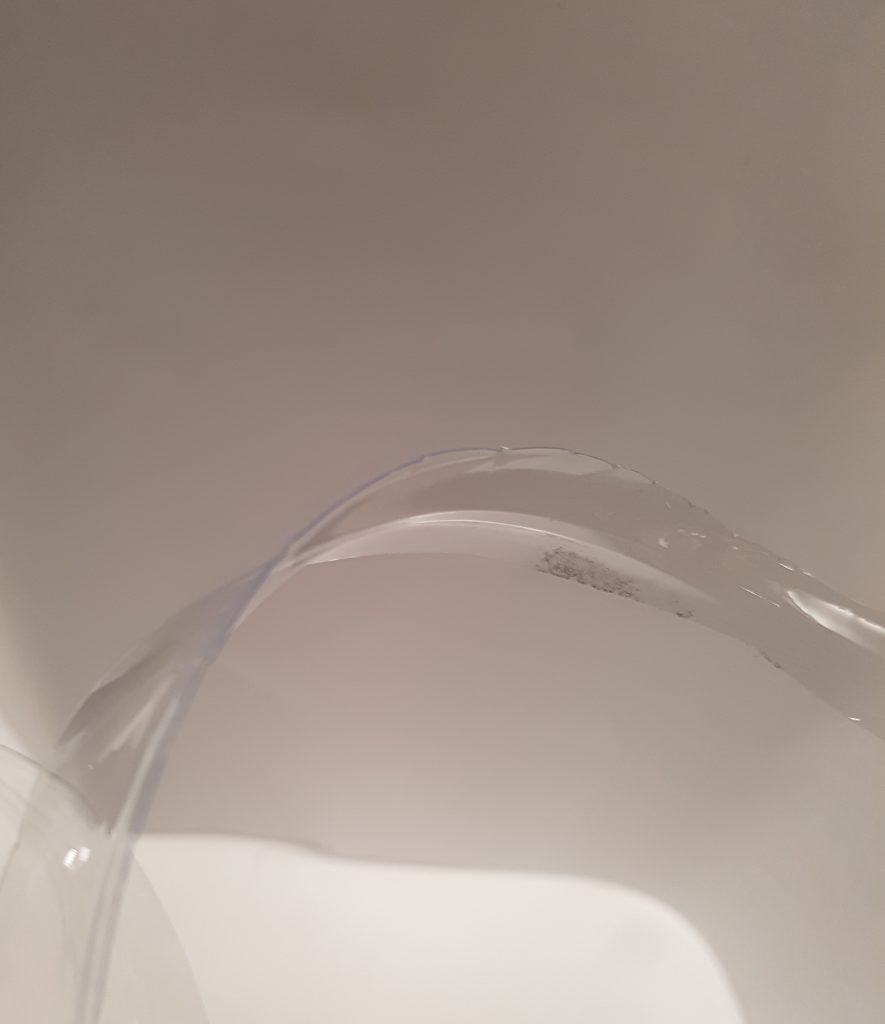 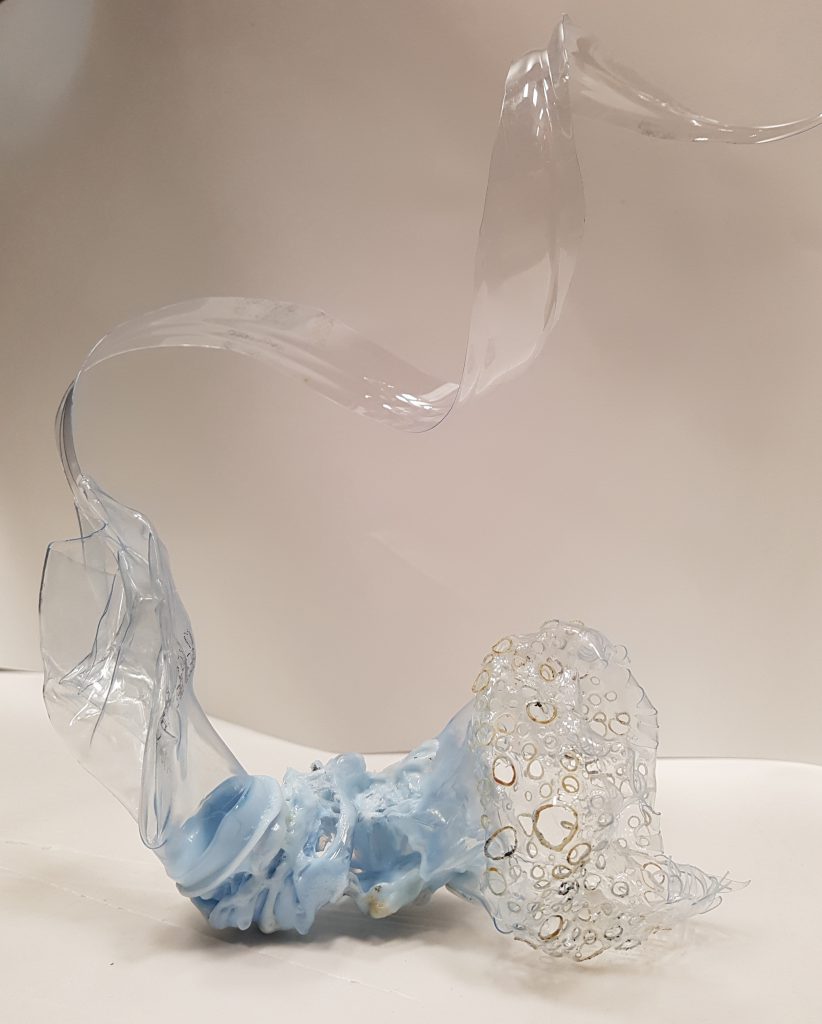