by Muhammad Shaherfi Hadi on October 9, 2020 in Interactive, My Work, Research 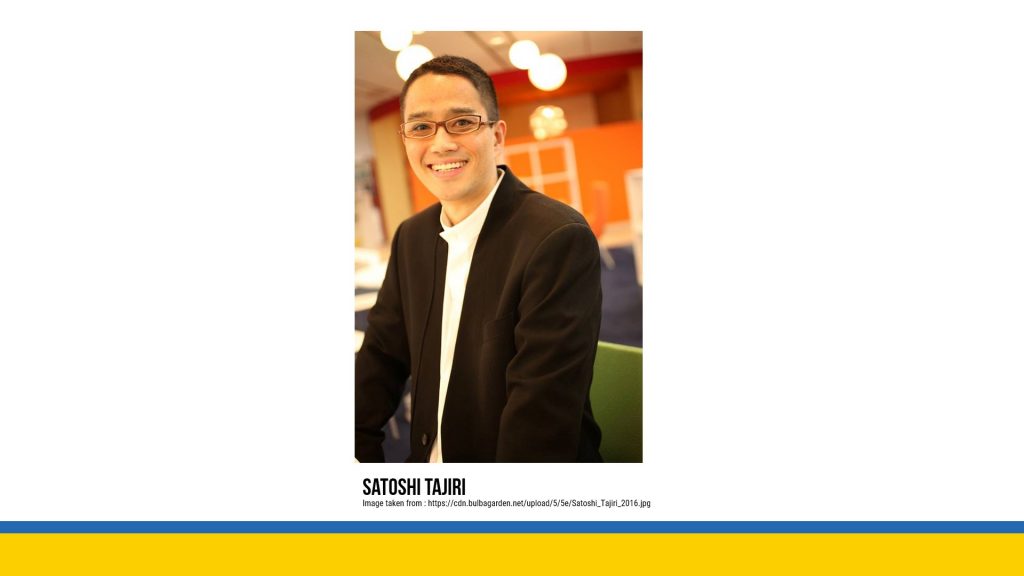 Satoshi Tajiri, is the creator of a franchise that I hold dear, Pokemon.  Rather than use this part of the report to go through his own personal history or the undoubted success of Pokemon, currently the best selling multimedia franchise of all time. I will write about the two lessons I have learnt while researching about this great man.

Lesson 1: Empower the People around you 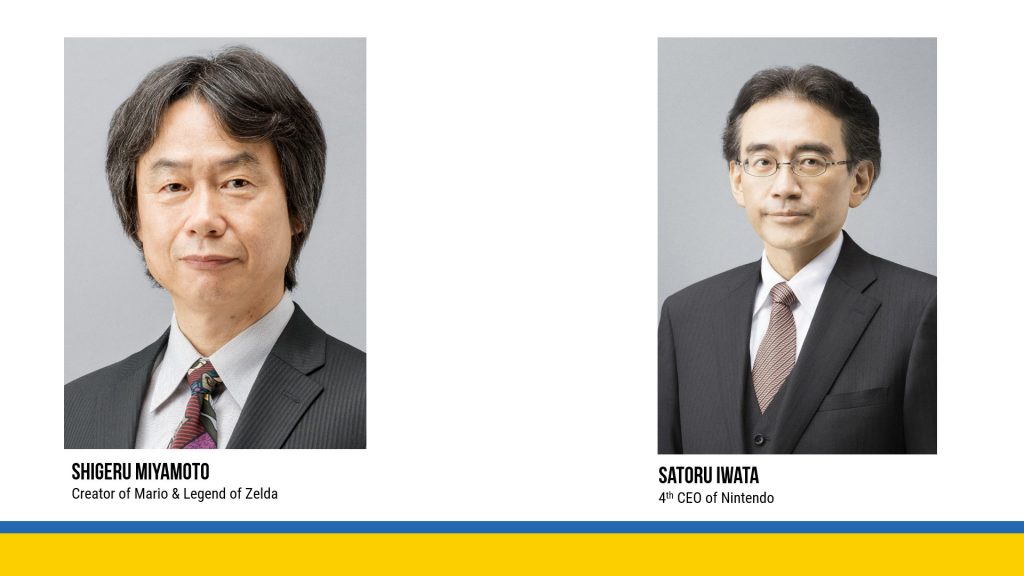 Pokemon had a tumultuous development cycle and wouldn’t have pulled through without the help of these two giants. Firstly, Shigeru Miyamoto, who convinced the board of directors at Nintendo to continue to support the project despite their initial hesitation. Secondly, Satoru Iwata. At that time had no relations to Satoshi Tajiri and Game Freak. Despite this, he helped with Pokemon’s code pro bono, simply because “he liked the idea and wanted to see it succeed”. This once again reiterated to me how the ripples of a strong community far surpasses that of an individual, and it is my hope that our own IM community for batches beyond ours would continue  to help each other with code and projects.

Lastly is art’s ability to enthuse. Satoshi Tajiri is actually a  diagnosed as a high functioning autistic and this is evident in his unwavering fixation and determination for the things he loves. Fans of pokemon with a similar disposition as Tajiri has repeatedly stated that Pokemon is a great game for people with autism as completing the pokedex, provides them with a great task to focus on, the game through the need to trade helps them to interact with people, and he himself is just an inspiration to the community. And I think that is just beautiful that a project filled with love and passion could inspire, not just this community but countless of others, regardless of race, language or religion, following them from childhood to adulthood. 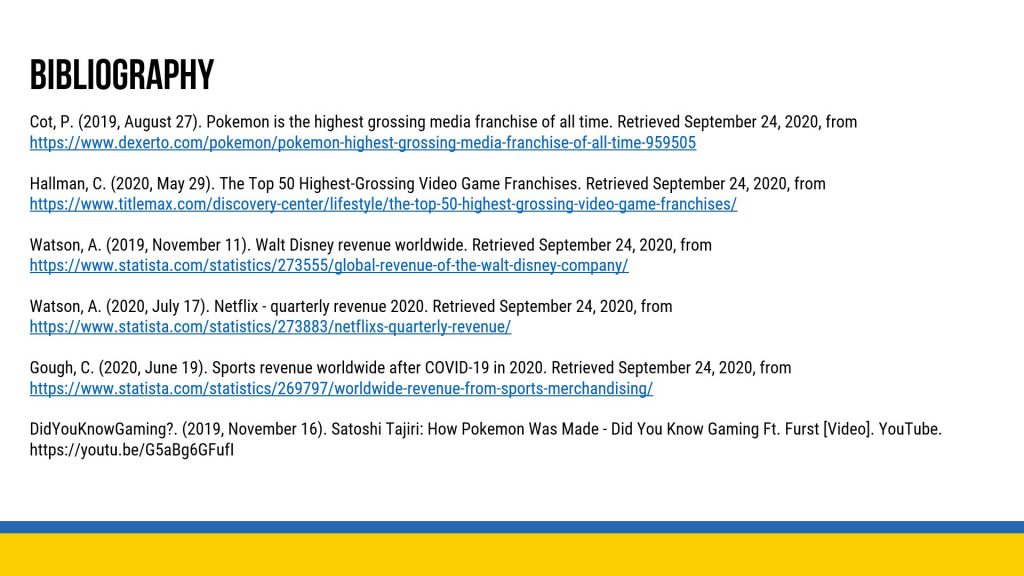 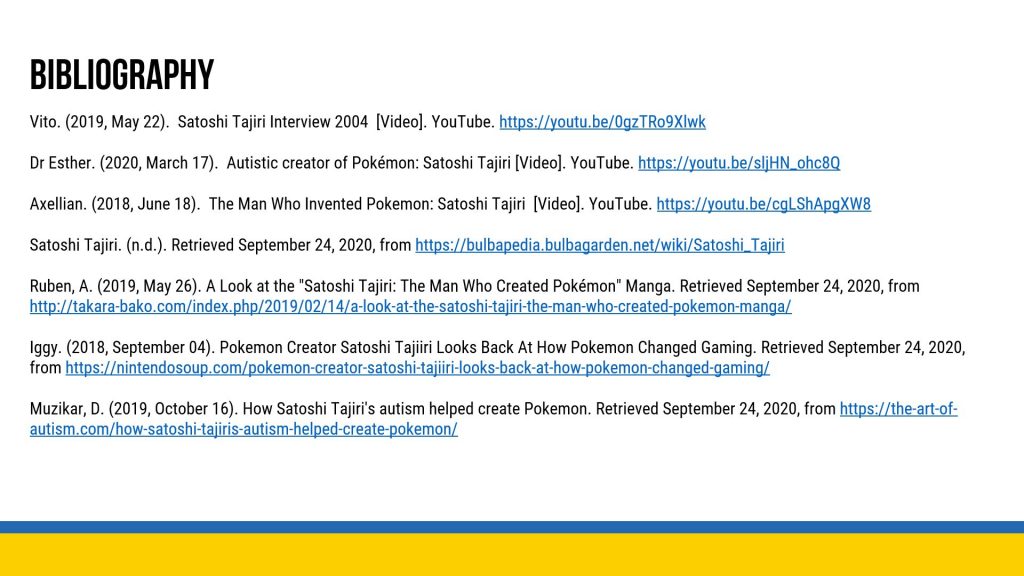 From this point onwards are additional information I have found during my research which I shall leave here for anyone who is interested to know more about Satoshi Tajiri. 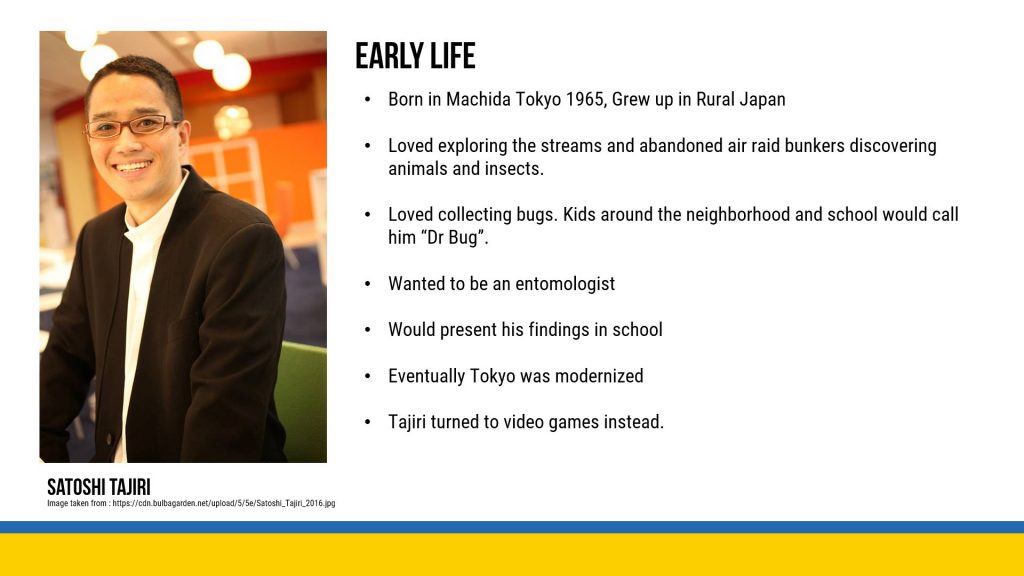 Born in rural Tokyo, Tajiri loved exploring the forests around his home, curious about the creatures they housed. In particular, he was very interested in bugs. Although Tajiri struggled with school and always found it hard to concentrate, he loved studying and sharing information about the things he was interested in to his friends. One of his teachers in elementary school even blocked out class time for him to present his findings. At the end of Elementary School he even created a newsletter and gave them out to his classmates. However, eventually his home was modernized and the pockets of nature were replaced with steel and concrete forests. Tajiri then turned his love towards anime and video games. 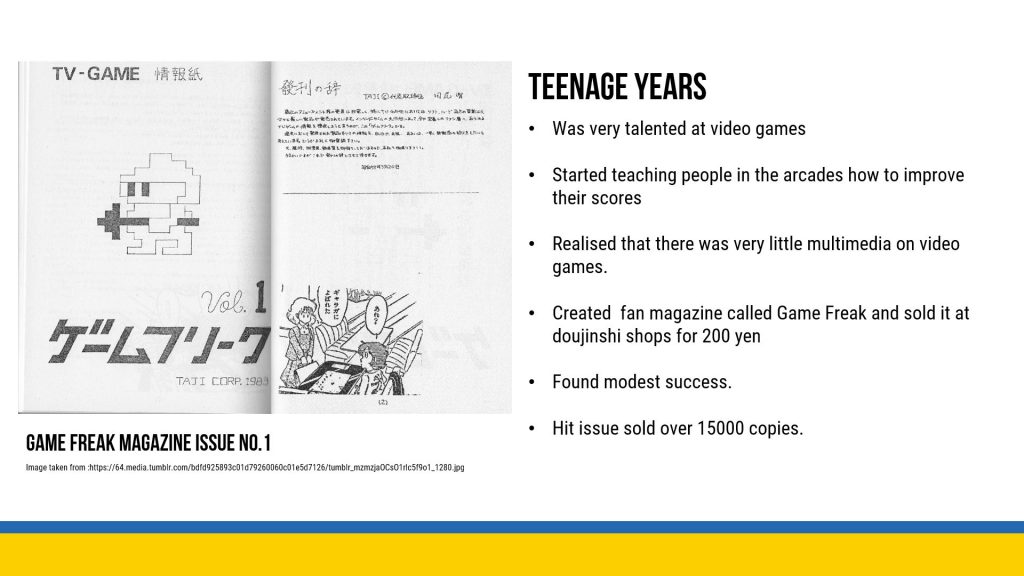 Tajiri would then spend most of his early years in arcade centers playing games. He soon discovered that he has talent playing video games earning the nickname “the Tempest” of the arcade due to his ability to play for hours only on a few coins. He played so much that one center gave him a space invaders cabinet and he almost did not graduate from high school or even go to college. Tajiri soon realized that there was little multimedia related to games and decided to marry his love for playing video games with his love for sharing information and set out to create his first magazine, Game Freak. Game Freak’s first few issues were all hand drawn, hand written, photocopied and even hand stapled( when Game Freak became more successful he even enlisted the help of his mother and sister). Sold at doujinshi stores for 200 yen a piece roughly 2.30 USD, the fanzine received modest success despite its relatively high price. Tajiri stated that what he was selling wasn’t exactly the magazine, but information and that is why people were willing to pay despite the low quality in print. Tajishi’s first big break came with a special issue that focused on a game called Xevious. That particular issue sold over 15000 copies and all of this happened while Tajiri was at the age of 18. 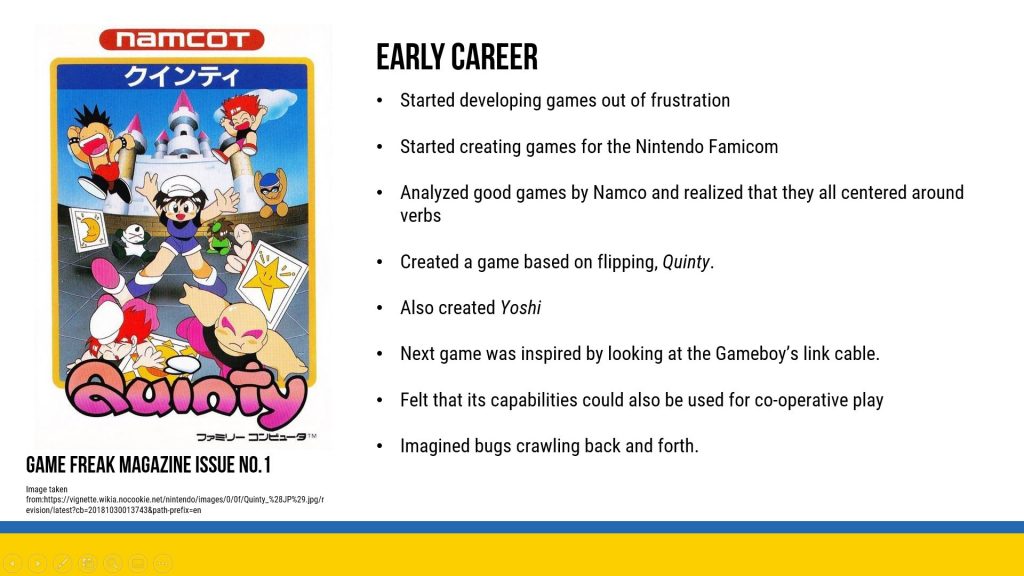 Eventually Tajiri moved towards game development. He claimed that he was able to very quickly differentiate between good and bad games. Feeling that the market was quickly being filled with bad games, Tajiri decided to solve this perceived problem by developing his own games. Analysing the games from Namco, a company that Tajiri believed produced the best games in the industry, Tajiri realized that their games were centered around a particular verb and decided to adopt this as his design principle too. His first game quinty, was centered around flipping. Flipping observed modest international success. That along other games developed by Game Freak like Yoshi, served to prove to Nintendo that he was in fact capable of creating good games. 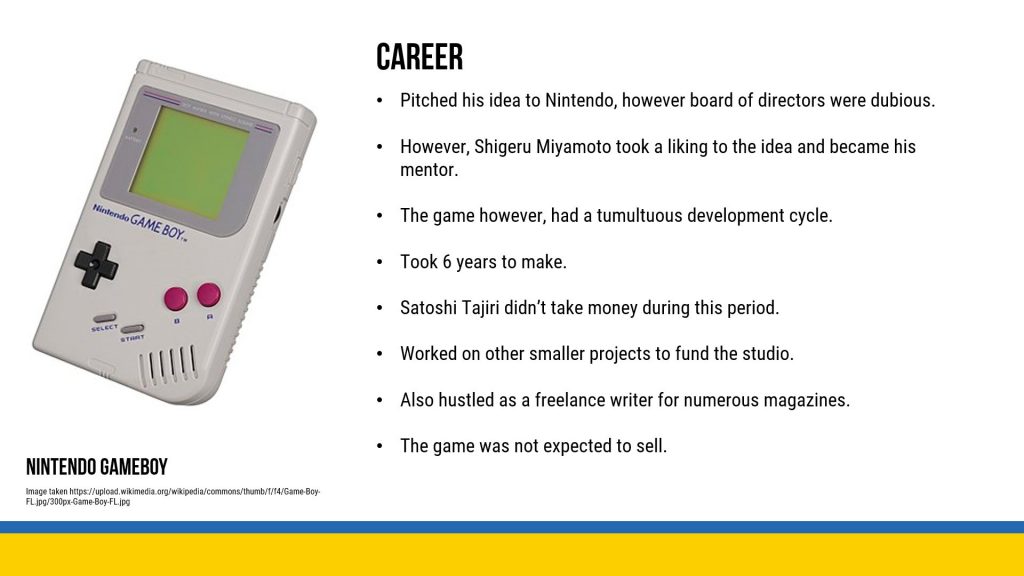 His next game would be his biggest project yet. Inspired by the link cable, which was used for competitive play, Tajiri instead wanted to create a game that would use the link cable for cooperative play. He stated that he imagined insects crawling across the link cable travelling from one Gameboy to the other and this set out to create a game that heavily drew inspiration from his early childhood. Presenting this idea to Nintendo, the board of directors were initially dubious and felt that the game was too ambitious and confusing. The game would experience a tumultuous development cycle and take 6 years to make, what is considered a very long time for that era. To keep the studio afloat, Tajiri would develop smaller games for Nintendo, what he considered as homework and also personally hustled as a freelance writer for several magazines. During this period, Tajiri struggled to pay his employees losing 5 of them and even didn’t pay himself throughout the development. It was only through shigeru miyamoto’s supportthat Nintendo even stuck with the development. Despite all of this, the game was not expected to sell as the Gameboy was already towards the end of its life cycle by the end of the 6 years cycle. However, Nintendo and Game Freak didn’t take into consideration that many Japanese kids still played with their Gameboys as it was cheap and they could not afford to buy more advanced consoles. And as a result this game managed to exceed expectations. And this Game was Pokemon.

It is without a doubt that Pokemon has been very successful and is actually currently the best selling multimedia franchise in history, beating even Star Wars and Mickey Mouse.