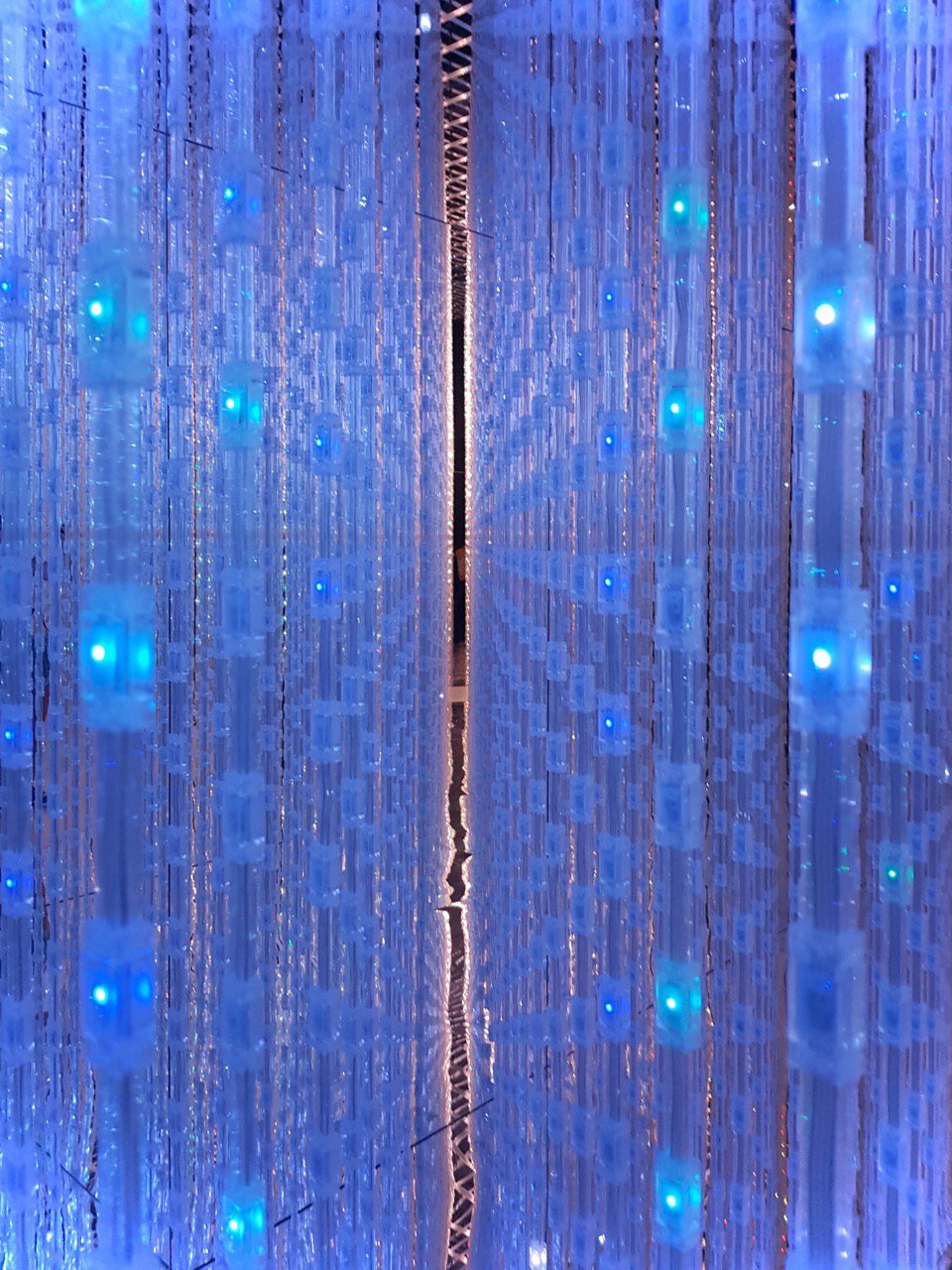 is an interactive space consisting of numerous exhibitions where visitors can interact and immerse themselves in a ‘magical’ environment. High-tech interactive artworks in Future World are created in collaboration with teamLab, a renowned interdisciplinary art collective. It is here where we see a fusion and removal of boundaries between art and science. How appropriate it is to be held at the Art Science Museum!

It is defined as a reciprocal action or influence, involving two or more objections or persons.

As we previously learnt, interaction come can in many forms, namely:

In future world, we are able to see all of these types of interaction happening. Man-man interaction is displayed through the observation and reaction to other people’s input onto the interactive screens, which I will discuss further. Man-machine interaction occurs when the visitors are required to sketch a drawing, move closer to the installation or follow an instruction to receive a reaction from the machine, in this case the installations. Machine-machine interaction is displayed when we move an object, for example in the City In a Garden – Giant Connecting Block Town, when a block is moved to a different location, the map recalibrates and reflects the current location of the block in the virtual map. 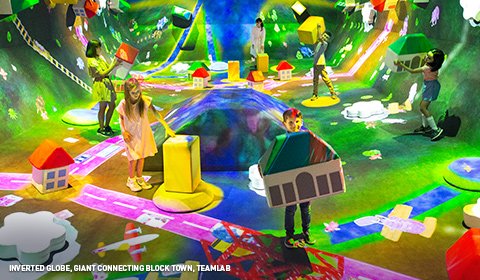 Real time change in location of objects, synchronized with the physical location of representation objects placed.

An interactive artwork should invite visitors/participants to think, take a step back and observe. It creates a personalized experience and opinion towards that particular artwork. We deviate from the typical need to critique and evaluate each artwork based on how ‘good’ it is, how it is able to accurately depict or evoke a certain emotion or get that certain reaction from its audience. Instead, we as the audience break down and digest the artwork empirically.

Certain level of understanding is needed before a viewer chooses to interact with the object. We as humans have the tendency to fear what we do not know and reject it. As much as we tend to give the audience the freedom to interact, we insert controls to guide the viewer, which does so much for us. These controls can help preserve our artwork, tailor user experience (albeit to a small degree), and most importantly ensure that the interaction becomes a positive experience. These ‘controls’ usually come in the form of instructions, or guides and hints that lead us to a certain action(that is usually unrestricted) that kick starts the entire experiential process. Without these controls, there will be little to no understanding from the viewer and thus restrict or compromise the experience. Let me provide you a few examples.

*170314_Sliding through the Fruit Field_nontelop

As seen in the Sliding through the Fruit Field installation, there is a set of staircase that leads people up the top of the slide, where they can slide down and observe the interaction beneath them. They ‘become a beam of life-giving sunlight, and as they glide down the slope, their energy is transferred to the fruit field, causing flowers and fruit to blossom and grow’. Even though the interactivity is the most important aspect of this installation, without the control(staircase), users may not be aware on how they should properly interact with the Fruit Field installation. Users may end up trying to climb up the slide via the interactive screen, which increases the chance for injuries etc, or end up not interacting with it at all because they don’t know how to.

At another installation, called the Sketch Aquarium, viewers see a set of tables and chairs, with a giant screen that displays the Aquarium. There is a set of instructions like this: 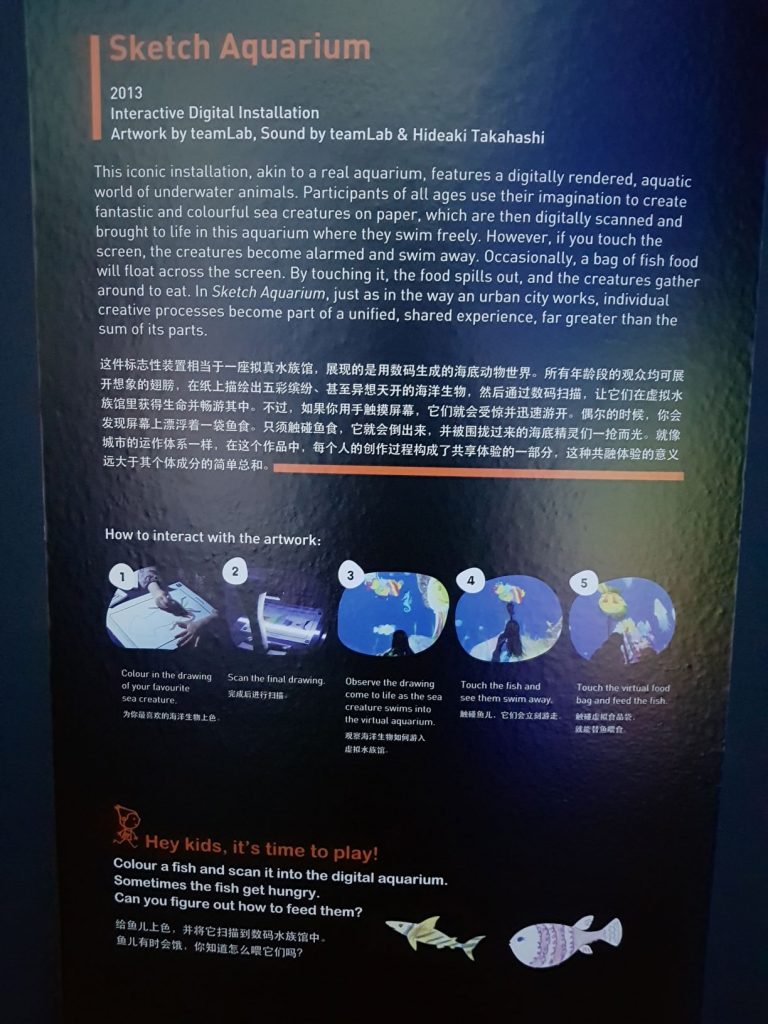 These set of instructions and description helps contextualize the artwork, and in my opinion, although done as an afterthought(so I would assume), it is a vital asset of the artwork.

As previously mentioned, the control acts as a guide and thereafter, the freedom of what to draw, where to touch etc. belongs to the participants.

I drew a gentlemen jellyfish and scanned it, adding it to the collection of fishes appearing in the Sketch Aquarium. 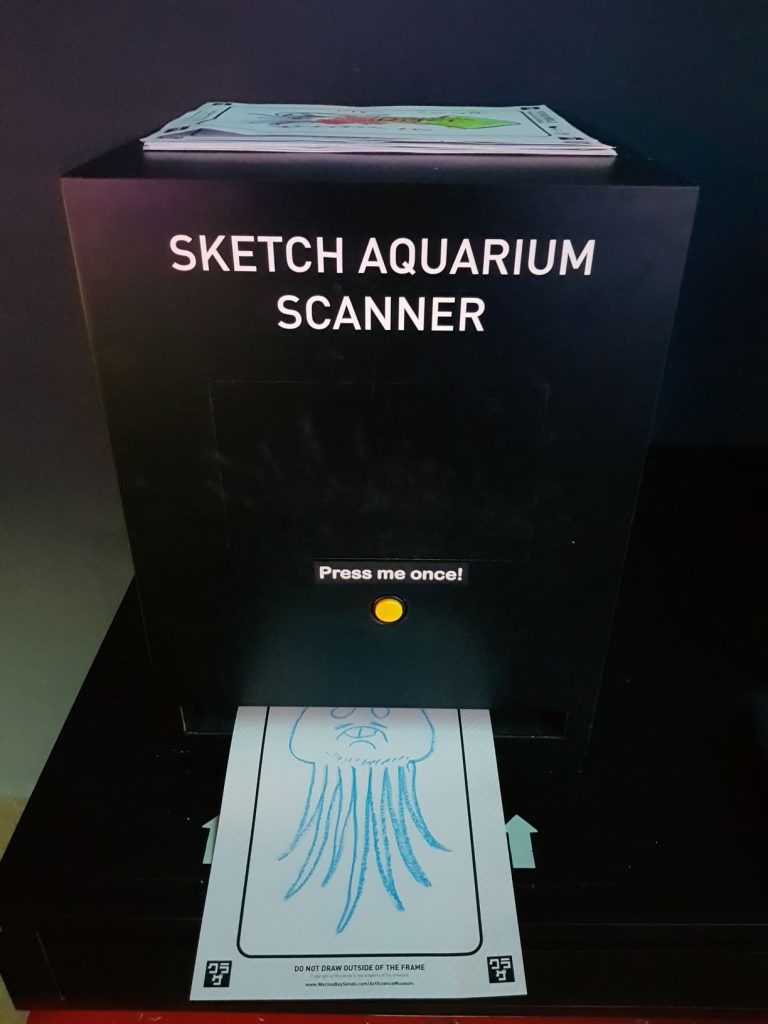 Video of my jellyfish

It was also natural for viewers to read and observe other viewers’ creations as well. One viewer had written on his fish ‘Free HK’, which reminded me that the content scanned and uploaded were unfiltered. This allowed the viewer to actively voice his opinion on the Aquarium, as part of the ‘freedom’ he was entitled in this interactivity. Could this be then considered a limitation of the artwork? After all, any viewer could exploit the use of the Aquarium. 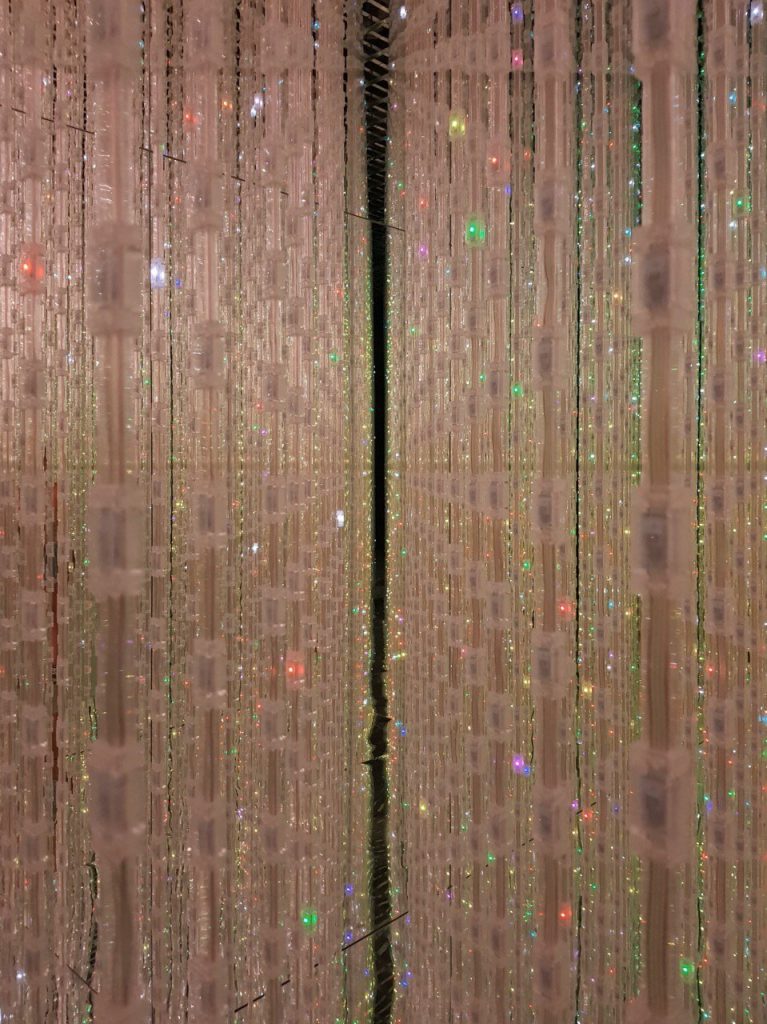 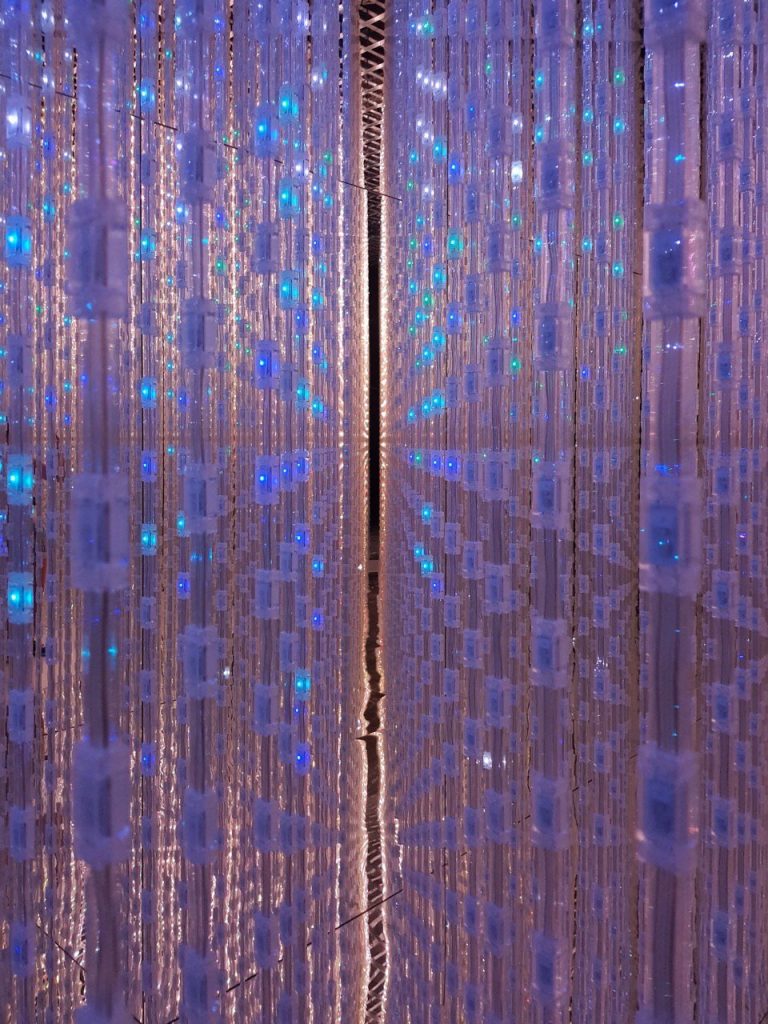 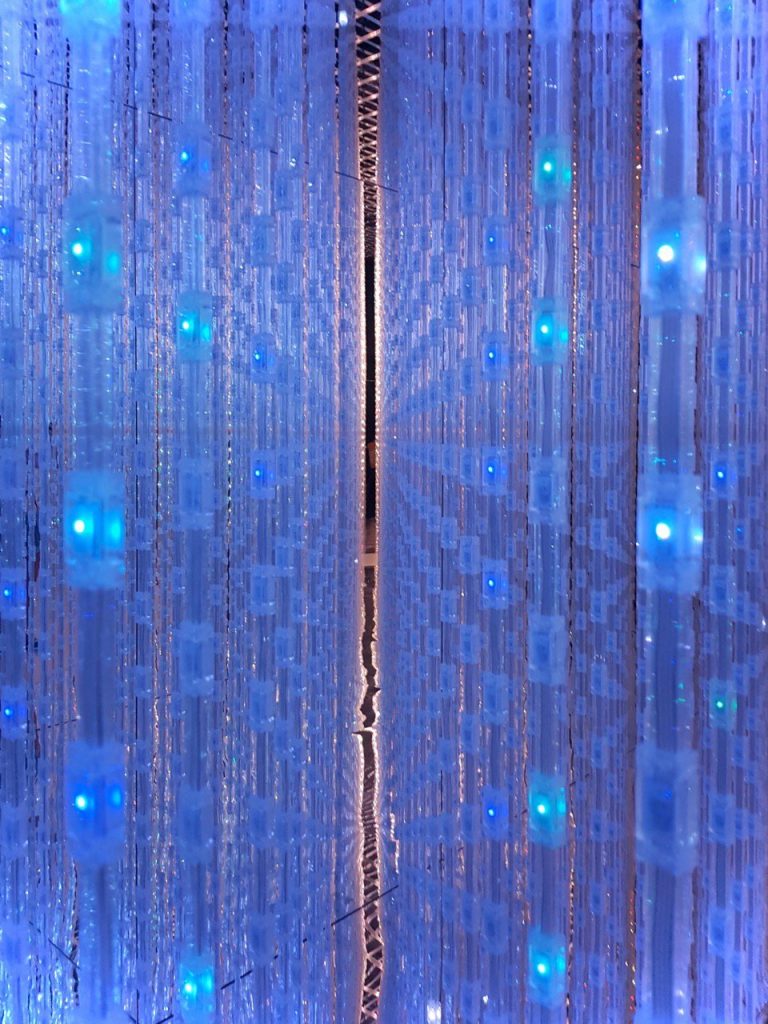 SPACE – Crystal Universe was strategically placed as the last artwork before the viewers finish up their tour of the FUTURE WORLD exhibition. The artwork consists of over 170,000 LED lights and a panel to walk through before reaching an open space that viewers can capture the entirety of SPACE. I believe that mirrors were placed on the sides, top and bottom of the lights to multiply the illusion of the countless LED lights that resembled stars. The concept of space and the unknown will forever be intriguing. The beauty of the galaxy and its vastness is reflected in pop culture, where movies are based in Outer Space. Although I did not linger in the art space, the interaction encouraged me to step back and think about the interactivity that it involved – the swiping on our mobile devices to change the light effects on the installation. The physical element of simply touching the artwork is removed, since we send our response through the internet. Will that, then, change the experience of the users when the element of touch, thus interactivity, is changed? The medium, in which we are able to interact, therefore affects greatly how we receive the experience.