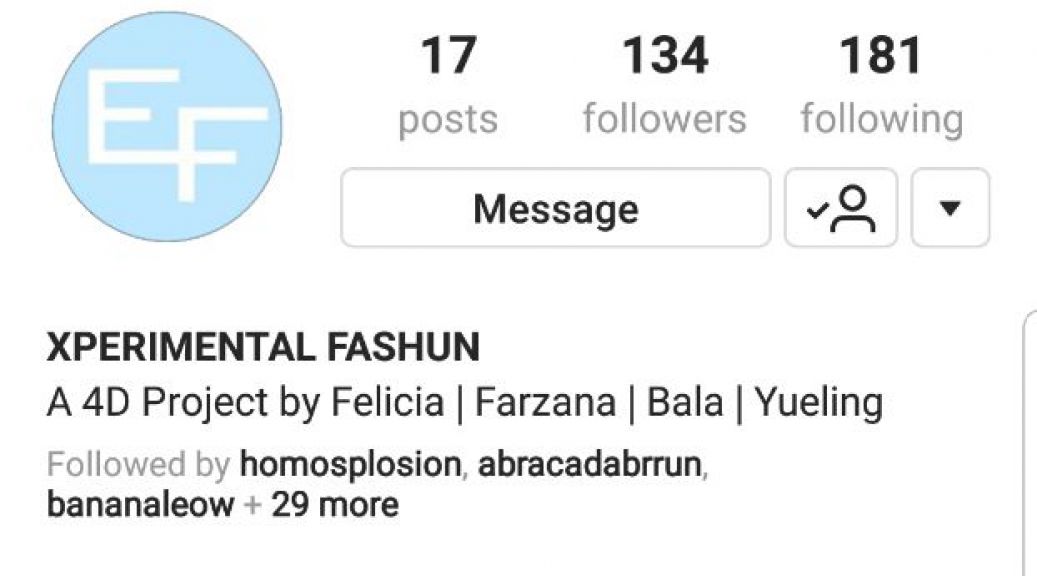 Our project involves the public on the streets and online. Bala and Felicia were the interviewers, while me and Yueling were the models.The interviewers’ jobs were to walk around Bugis, Sim lim square, NAFA and SMU.  The models’ jobs were to pick out 5 outfits/accessories from each category, and list them down as vague descriptors. Below is an example of the list: 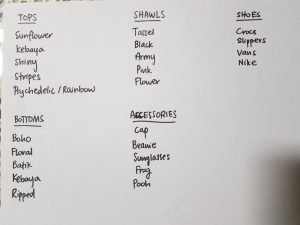 While the interviewers walk around and find people, the models are on Facebook live with them. Since we had to be at home with our outfits, me and Yueling accompanied Bala and Felicia in the third space instead. Facebook live was to also to show the public on the street how we look like, so that in a way, they can gauge what looks(or sounds) good on us.

This experiment projects culture and identity through fashion. Since we were going to interview and ask people from different areas, age groups and ethnicities, we can see a stark contrast in the way they have chosen to put together an outfit. In our interview, we managed to get someone from Thailand and Malaysia. The outcome was funny. The outfits turned out whacky and fun. The colours don’t even match. But that was what made the whole project fun, the results were unexpected. It could be seen as a glitch in the ‘online shopping’ trends, where what seems or sounds nice online might not be true to reality.

The locations we went to had different demographics. For example, Sim Lim square is known as the ‘geeks’ place. When Bala went there there were mostly middle aged or older people. On the other hand, Felicia went to SMU, NAFA and Lasalle area, where there were more young adults and students.

There are differences in the kind of outfits people chose. For example, the younger people would choose monochrome or ‘trendy’ clothing. The older generation, on the other hand, chose more colourful and decorative outfits, such as stripes or kebaya(a traditional Malay outfit).

After which, we collated the pictures of our outfits and posted them on Instagram. We used the story poll feature on Instagram to allow people to vote which outfit they preferred.

After which, we boiled the 4 most voted outfits down to 1, asking people to comment which outfit they preferred the most:

From my observation, people were more responsive and willing to participate online as compared to the public on the streets. It was difficult for Felicia and Bala to get people to participate in our project.

Here’s the link to our video!