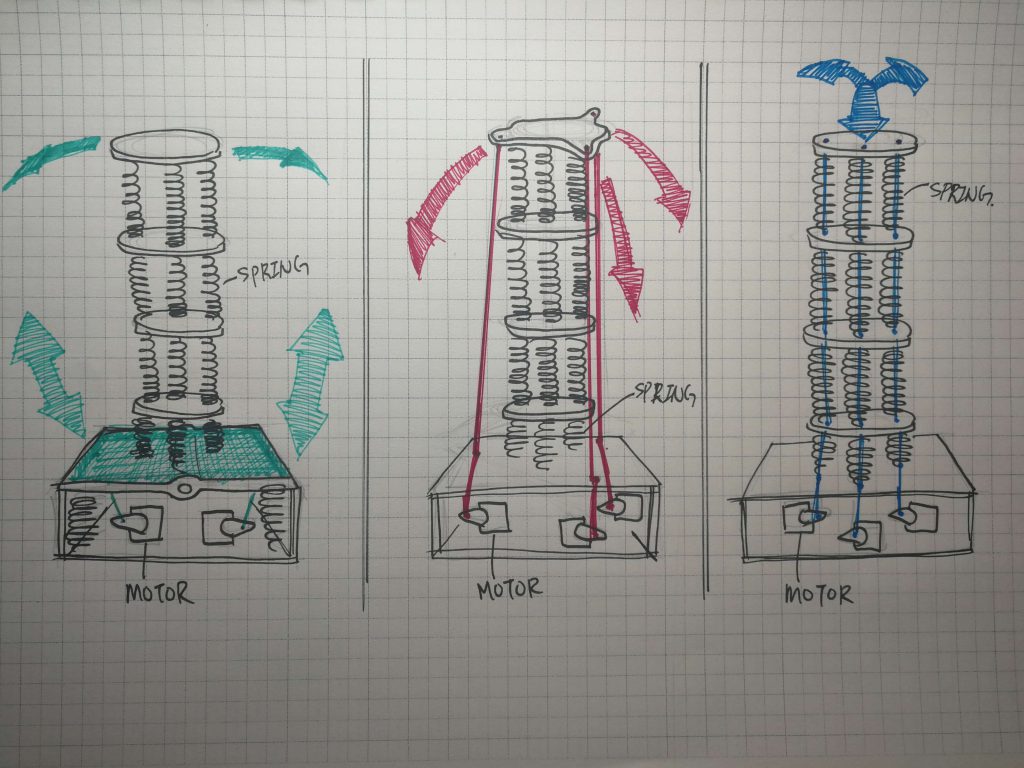 I mentioned that I will be testing out on these three sketches to see how the spring assembly works for each set up. I have now made the three sketches. On the left will be sketch ONE, middle is sketch TWO and right is sketch THREE.

Testing of Sketch ONE (Left of the Sketch)

When testing, I found that the set up is limited to only swaying left or right and the movement is not able to be controlled. Thus, I will not be using to concept to use in my final build.

Testing of Sketch TWO (Middle of the Sketch)

This set up was extremely hard to control as you can see from the video. It requires a wide range of motion which will affect the size of the built in the final project. I want to size of the base of the set up to be relatively small. This set up does not have enough control for me to fully navigate where the spring is swaying and the movement looks very forced.

Testing of Sketch THREE (Right of the Sketch)

This set up is very easy to control. The movement is corresponding easily to the direction of pull. As the set up has strings going through the springs, it was extremely hard to get them to be in a working state. The sway and movement of this set up is also the best amongst all of the three and it does require more work.

I will be using Sketch THREE for my final robotics set up but there are a few things to change before doing the final one. Firstly, I need to make sure the structure can stand on its own. Secondly, the set up need not use much pulling force to make it sway. Lastly,there would be more springs per plate but the movement of sway should correspond to the direction of the pull just like it is in sketch THREE.

For my next mock up, I will try to do a 4 spring per plate set up and see if it stands on its own.