We wanted to explore the connections between each live stream and the fun possibility that we can create! Since our final project will be presented on the grid wall, we decided to build our whole concept revolving the idea of the grid wall and the potential of viewing all four live streams at the same time to create a piece much greater than each individual stream. Exploring the idea of third space and synchronising one and other. It involves interaction, cross streams, planning, coordination and a lot of teamwork in this project.

We start off at different location and moving to meet each other at the same pace where we play with the visual effects of filming. From synchronise games, face connection to various streaming ideas are thoughtfully planned, hope to explore different ways of live streaming

The video below is the video wall with the correct timing to start all the videos:

The live video below is my broadcast for the final project:

Some interesting shots of Telepathic Stroll

This configuration of the videos together looks like Makoto and SuHwee have two snake companions.

With Makoto and SuHwee in the center and the two paths beside them, it gives a sense of the overall picture of the place we are at.

Bumped into Zifeng on the way back

Meeting as a group

We swapped phones when we met each other

Having fun with our legs

Waling backwards and still filming each other

Panoramic view done by all of us lining up our phones 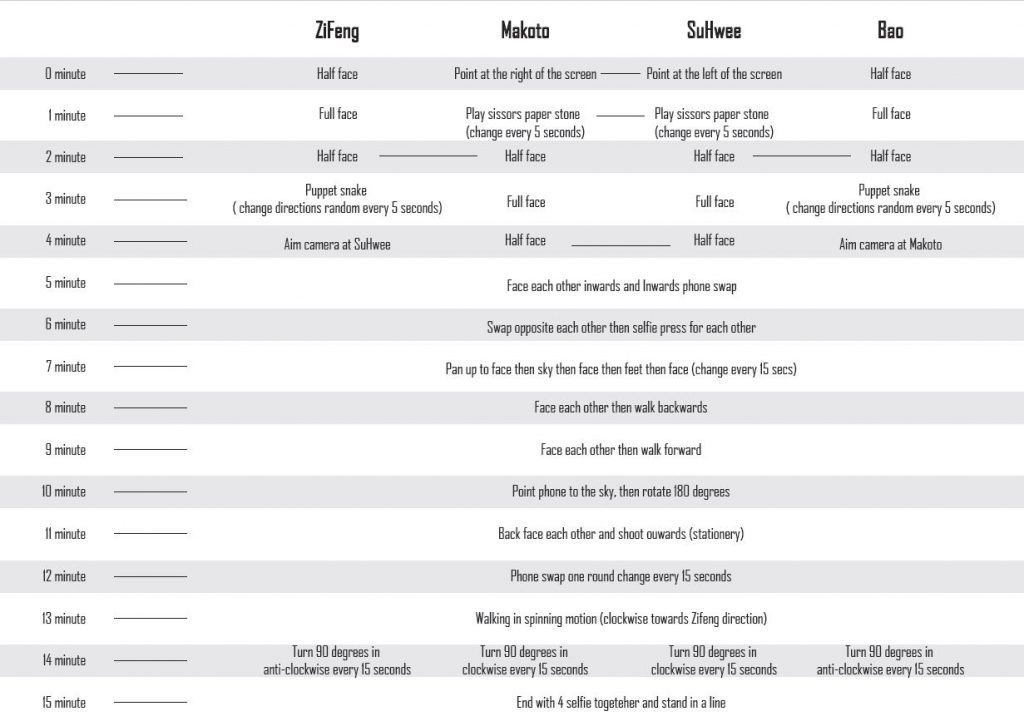 The above is the flow chart that I came up with for the group. The ideation of all the actions were done with everyone suggesting something and I tried to choreograph a flow of activities/ actions for the final project. To summarise the the chart, we started with being 7 minutes away from the meeting point. We then slowly walk towards each other while exploring the Botanic Gardens. As we reach and meet as a group, we will do a live performance at Botanic Gardens as well as broadcasting live on Facebook. The main concern when creating this chart is to make every activity ease into the next. From broadcasting individually at the start, to live performance as a group at the end, I tired to make sure all of the actions does not contradict the direction we are walking, the set activities that we are be performing, as well as the space required to do the actions.

Working with Zifeng, Makoto and Suhwee was a fun and pleasant experience. Each of us did our given task and executed the final piece on the FIRST TRY!!! Amaaaaaazinggggg!!! Zifeng was in-charge of  creating the audio time-line for each of us to perform set actions. Makoto was in-charge of recce and weather. Suhwee was  in-charge of coordinating all of the roles. And I am in-charge of the choreography of  the final performance.

Language of media is everybody’s language. Set up the camera and you can speak to the world. – Parry Teasdale

I feel that I was most inspired by the quote by Parry Teasdale(Videofreex) as it was most suitable for this project. As our final project in considered using a very new form of media as a medium to communicate with the world, we were able to Go Live on FaceBook with a press of a button and start showing and interacting with the rest of the world about the venue we are at and the culture that we have. Like the quote, we literally set up camera and started doing live broadcasting. Speaking to the world has never been easier.

With Telepathic Stroll, we explored the different combinations of actions which intrigues the viewers and with a smooth transition of one action to the next.  We opened up many possibility of unique visual synergies between cameras, environments, content makers and the audiences.