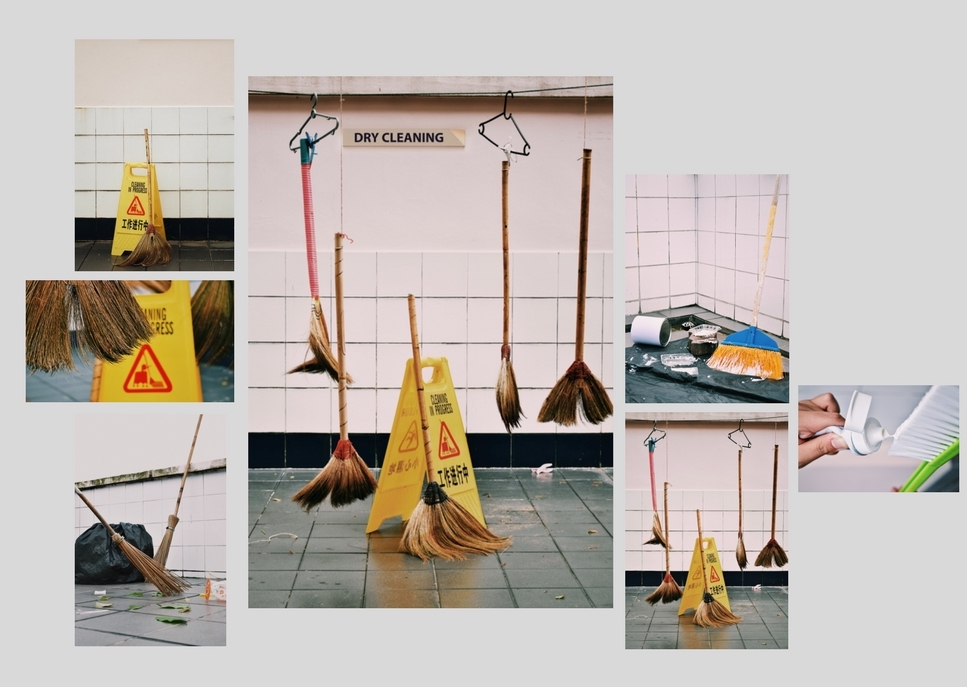 Kon’nichiwa! This post will be on our second project for Foundation 4D | Project 2: The Subverted Object.

In this project, we are given 3 different pictorial task to complete with the assigned object to us:

Retro style, better known as vintage inspired, is style that is consciously derivative or imitative of trends, music, modes, fashions, or attitudes of the past.

In this series of photo, you’ll notice that the photos are desaturated accompanied with a warm temperature to it. This is to create a retro or rather nostalgic vibe to it.

For task 1, I took a set of photos that captures the physical attributes and the practical functionality of a broom.

The physical attributes of a broom includes the shape, form, texture and material. For the first photo, I took a close-up shot of the broom against a cleaning-in-progress yellow caution sign. This is to capture the form of a traditional broom that’s commonly seen and used in Singapore.  Besides, the yellow caution sign provides a (not-so) subtle hint to the practical function  of the broom.

For the second photo, I took a extreme close-up shot to capture the material of the bristles.

Despite the faint presence of the yellow caution sign, the focus was still on the bristles. By zooming into the bristles, I wanted to capture coarse texture of it. As seen, the bristles are of uneven length and spilt into two different parts. This goes to show that the bristles are rough in nature.

The practical functionality of the broom is to actually sweep away any remains of dirts. For the third photo, I took a medium long shot of the broom sweeping away the fallen leaves on the ground.

As seen in the above, there are remains including leaves, receipts and plastic cups scattered on the ground. Also, there is black trash bag at the far back, further creating a relationship between the broom and it’s function to sweep the remains into the trash bag.

For task 2, I took a series of photos that subverts the meaning of broom by placing the broom in a different context.

In accordance to Google’s definition of the word, subvert, that is:

In this case, instead of trying to undermine the power and authority of any established system or institution, we are essentially giving the object a brand new meaning of our own.

The concept behind this photo came from the phrase – ‘cleaning supplies‘. Cleaning supplies are usually associated with the word – ‘clean’, which actually refers to being free from dirt, marks and or stains by cleaning.

Hence, I decided to give it a new twist where the cleaning supplies are being cleaned. In a general household context, the most common way of cleaning is to wash and hang the object till it’s dry and that’s how I had the idea of hanging the brooms to portray the very concept. Besides, I intentionally included the laundry line alongside with the hangers and clothes peg to create a sense of familiarity of the common household scene.

The concept behind this photo was inspired by my (mundane) morning routine. While I was stressing over how I should subvert the meaning of a broom, I was casually sweeping the loose hairs on my bed with my bare hands. Such a hassle, I thought to myself. Then, I recalled that my mom bought me a bed-broom previously and it hit me how the form of the bed-broom is similar to a tooth-brush.

Hence, I decided to capture this photo in a way where the squeezing of toothpaste provides a sense of action leading to the brushing of teeth.

The concept behind this photo was inspired by a sight that caught my attention while on the way back to my hall. I saw that the hall next to mine was undergoing renovation where paint tints, blue canvas mats and wall paint-roller are scattered all over.

It didn’t leave a huge impression on me but as I was looking around for brooms to shoot the photos, this particular broom (in the above) was coated with white paint. This sparked me with the idea that the broom actually takes the form of a paint roller. Hence, I played with the form of the broom and photograph the photo in a way where white paints are scattered across with the traces of white paint on the bristles of the broom.

A text can be used to enhance and add to an image. It can initiate an idea or provide a structure for and coherence to the images.

By adding the text – “Dry Cleaning”, it clarifies the meaning of photo. In this case, the text acts an anchorage. This is where without the text, the viewer would be confused as to why the brooms are being hung onto a laundry line with hangers and clothes peg. However, with the inclusion of the text, the viewers are given a clearer understanding where indeed, it is a dry laundry area and the brooms are not being mistakenly hung there to dry.

Known for his self-portraits, Kyle Thompson is a 21-year-old self taught photographer that is based in Portland. Essentially, his work encapsulates a nonexistent story line that only lives for a split moment.

Some of his representative work(s):

By diverting the view of the face, the images become more ambiguous, the viewer is no longer able to tie a defined story line to the image.

Melancholia, is the prime concept in her photos where there are beautiful scenes with a sad and dreamy aura.

Some of her representative work(s):

Well-known for his witty and thought-provoking images, Rene Magritte was a Belgian surrealist that often depicts ordinary objects in an unusual context. His work usually challenges the observers’ preconditioned perception of reality.

Essentially there is no right or wrong to this painting as the picture of the pipe could also act as a representation, hence it is not a pipe.

The titles are chosen in such a way as to keep anyone from assigning my paintings to the familiar region that habitual thought appeals to in order to escape perplexity.

Known for the most notorious readymade, Marcel Duchamp was a french artist that pioneered Dadaism. He is seek to challenge the conventional notions of what is, and what is not, art. Through his creation of readymades – ordinary manufactured objects that were simply chosen and repositioned or joining, Duchamp, challenged the very notion of what art is.

The Fountain, was a famous readymade by Duchamp. He purchased a urinal from a sanitary ware supplier, turned it upside down and arranged for it to be submitted for the exhibition as an artwork by ‘R.Mutt’. Duchamp’s readymade indeed questioned what art truly is and conveyed a concept, “This both is art and not art”.

Shots that didn’t make the cut: 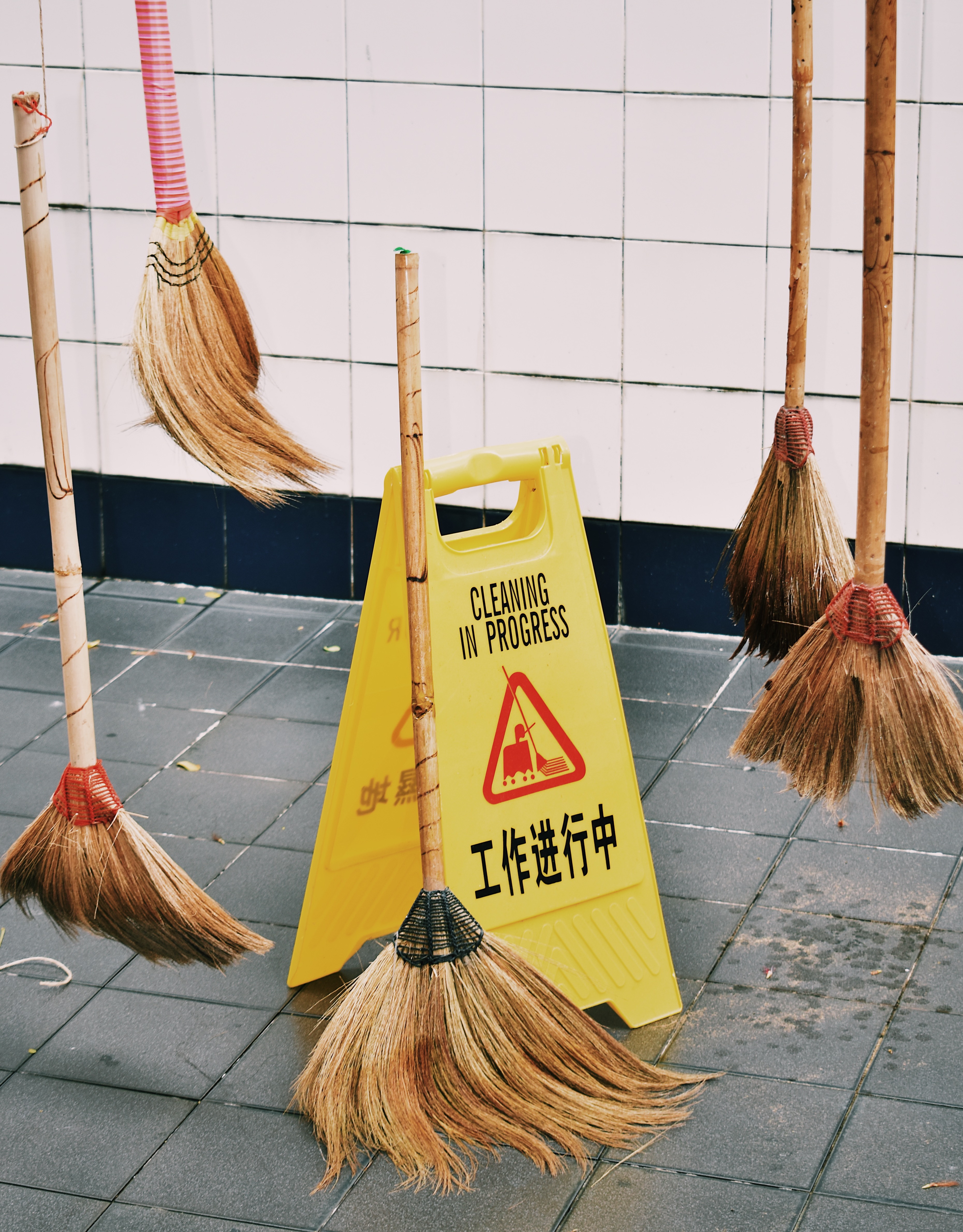 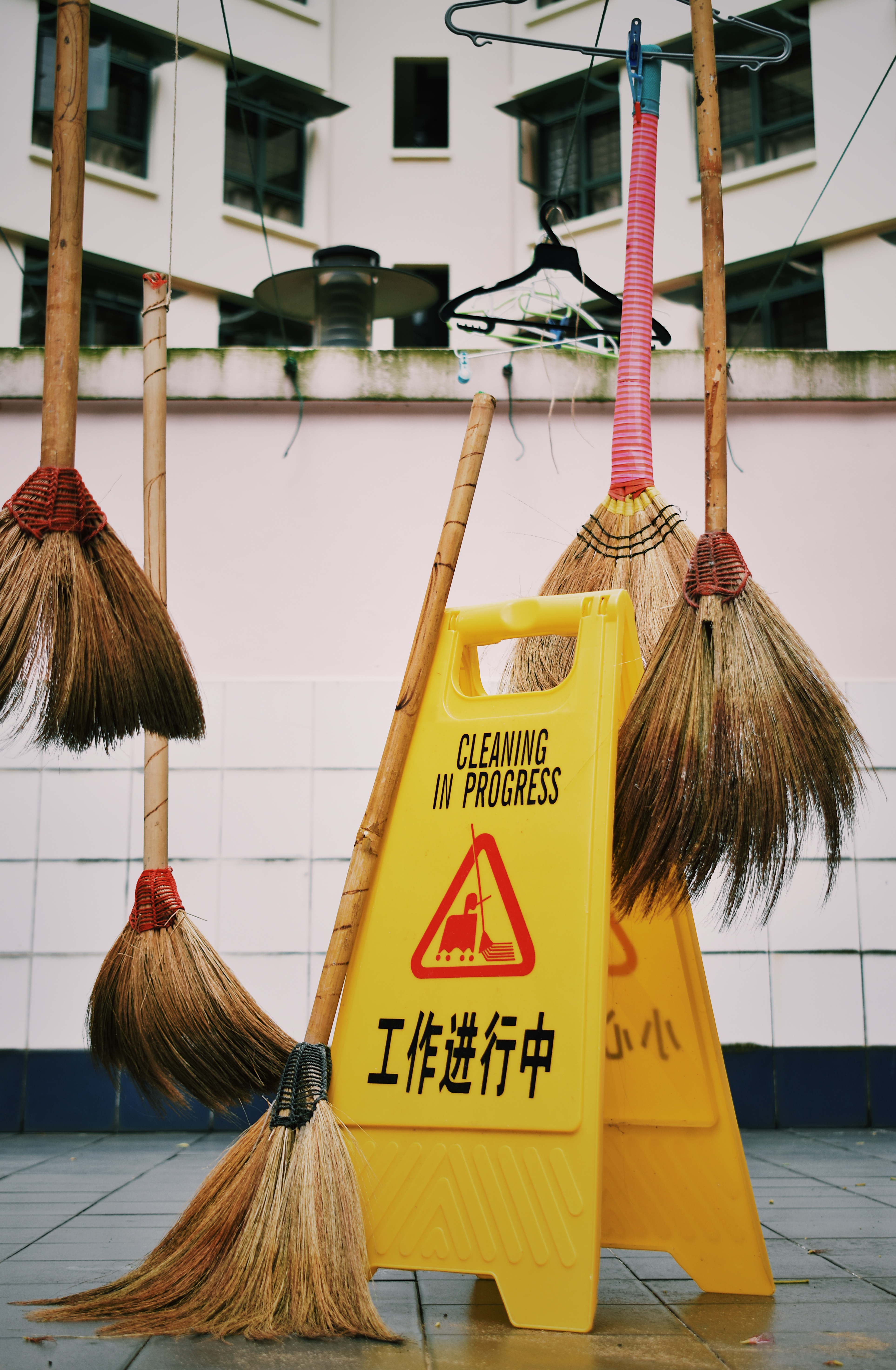 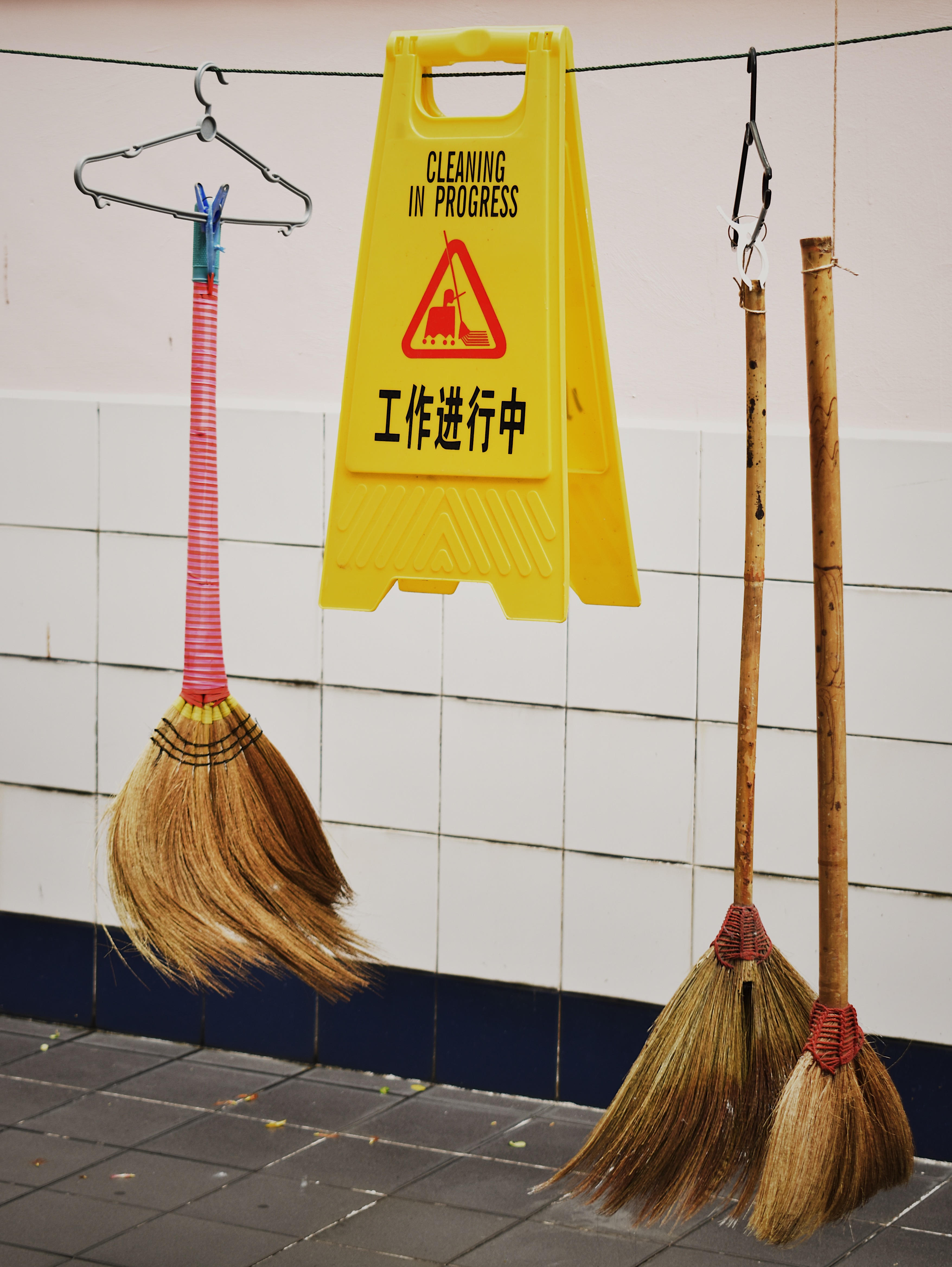 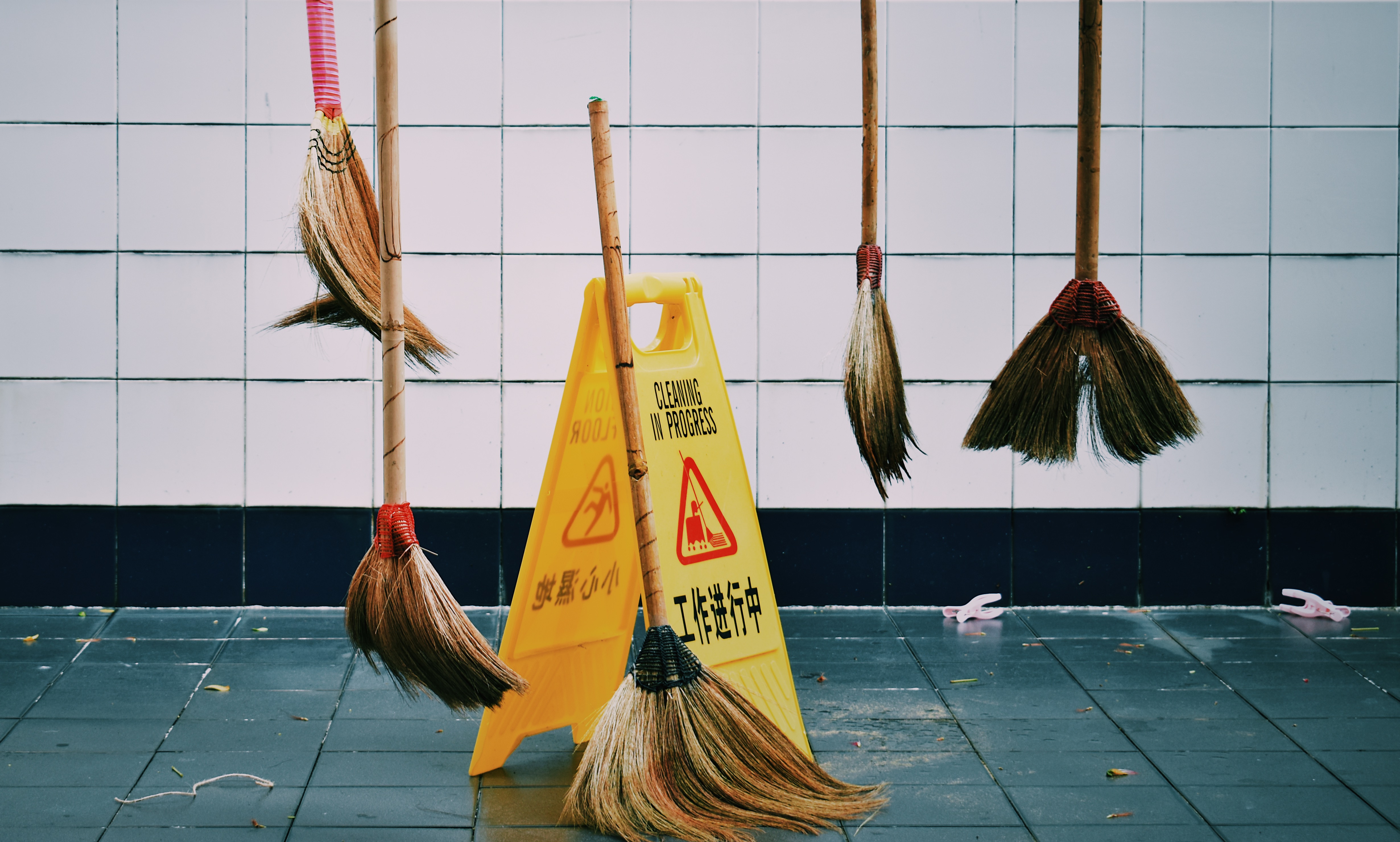 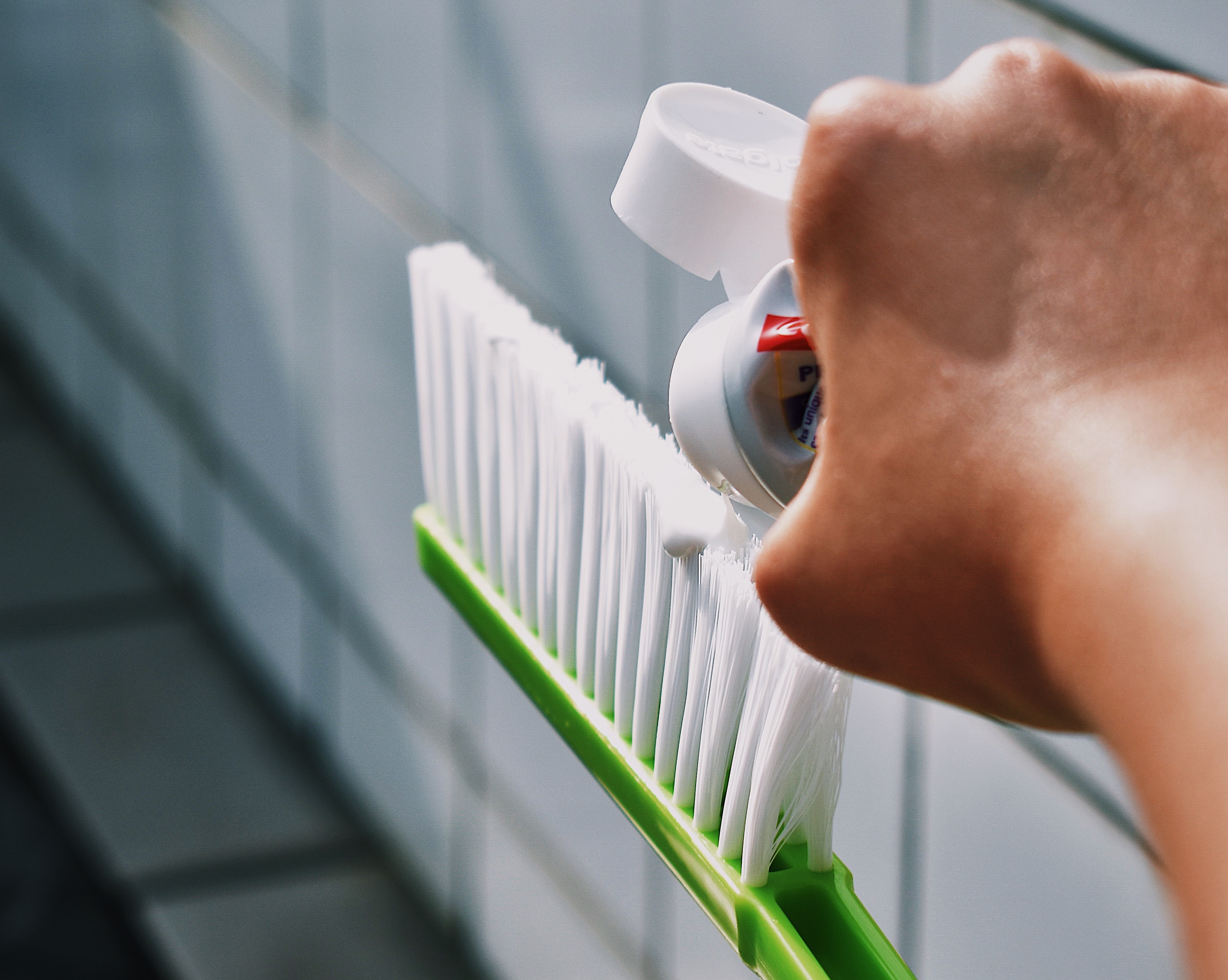