Since this week’s reading is about budget control, i think my questions for Professor Louis-Philippe Demers couldn’t be more relevant.

Does budget ever a problem for you to design and execute your robotics sculptures/artworks?

As I imagined they are very expensive to build as they need very special parts and mechanism, is there a work where you changed some aspect of it to fit in the budget that you have?

Furthermore, do you think budget should ever be a problem for us students? Do working with budget constraints only push our creativity to the maximum?

I would also like to argue that working with budget constraints is a very important issue as we will not be able to make our idea a vision if we have no money to buy materials. So when this happens, our ideas shift towards a different direction to cater to our budget instead. How do we deal with this problems as a student? 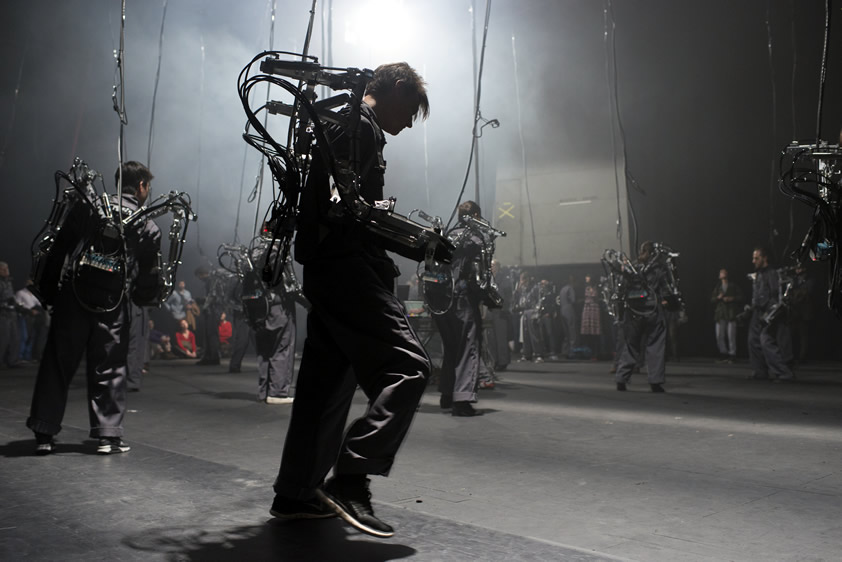 If there is a specific work I have to ask question for, it would be the recent Inferno. How does working alone and working with a partner different? Does a clash of ideas always happen and how did you and bill manage to finalise on an idea?

At Vancouver, I attended an artist talk. All these artists are actually professors and professionals working in university all over the world. One of the speaker was Ana Jofre. Dr. Ana Jofre. She’s currently in OCAD University doing a research position.

She was sharing her project on anthropomorphic objects which she is interested on and large based on her artwork and practice. Her first artwork she shared is titled Monster Jofre. See that little hairy guy there, that’s Monster Jofre. Basically, Monster Jofre is an interactive sculpture that responds to people’s presence. When one comes up next to Monster Jofre, the head will turn and face you. Below is a video that shows just that

Right after she showed us that video, she went on to explained the rationale behind her practice and work. She mention that the lagging of Monster Jofre’s head turn create an awaited anticipation for the viewer. Personally, the lag works for me as it shows normal human behaviour sometimes.

Ana also mention that her work is based on a human form because the human form is uncanny and furthermore simplistic form that is relevant to all of us; being able to recognise another human form.

Monster Jofre is actually female with fur which explores the confusion of gender in the society as well. Ana proceeds to share with us how this artwork explores what it means to be human. From instant judgement of Monster Jofre to accepting how the sculpture looks like. Her other human form sculpture also take her last name as this is something I am wondering about actually. I suspect that Ana Jofre is creating a part of herself into theses sculpture and by placing her name as part of the artwork, they are a representation of her. I wanted to ask her this question but I never got the chance to.

Ana then puts these sculptures into narrative sequence. Since they are taking in a human form, I guess it is only right that they too, have a story to tell about their life and personality. Even though Monster Jofre is just a big hairy fur, Ana Jofre mentions that these objects do have personality. Like a puppet, Ana Jofre directs them in situation for example, sitting in a bench at a park. Taking selfie with Ana Jofre’s artwork has become an obsession for some in this selfie-digital world. Giving storyline to the photograph creates a reference and give life to the motionless sculpture, Ana proclaims. I really enjoyed Ana Jofre’s presentation about her practice. By combining robotic, interactive and sculptural into her work, I believe each of them compliments each other to give a complete experience for the viewer. For example, a robotic sculpture usually takes no form of a human form but instead, bare and metallic. By making a human form robotic, it makes her work more relatable to us. Moreover, it is also interactive! A very friendly artwork that is accessible to all of us. I also feel that putting her sculpture into photograph which creates narrative adds another layer into her work. I have attached a photo of Monster Jofre which is more clear to see. About the artist: Ana Jofre.

Here’s what Ana Jofre wrote in her website pertaining to her Artist Statement:

“I’m interested in the emotional response that anthropomorphic objects elicit, and in our desire to imagine life within them. My life-sized ‘people’ are the artistic output of playful musings on this idea, merging sculpture with puppetry and some robotics, with the intent of evoking a (pleasurable) sense of uncanny ‘presence’. The human figure, as a form with which to communicate, and the themes of presence and personality are key throughout all my artistic products, which include ceramic sculptures and pencil-drawn portraits.”

There isn’t a website that feature this particular work though.

In her website, she does a lot of sculptural work which takes a form of a human. Even though her background is in Physics, she started pursuing art as a professional practice. Maybe her background in Science does help her a lot in determining the scientific backdrop of a sculpture and human features.