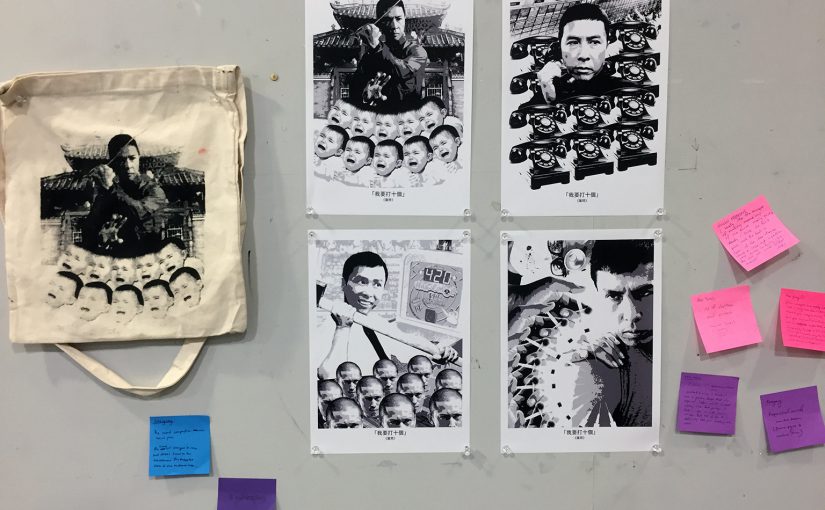 For our second 2D project, “Forrest Gump,” we were invited to create a series of images that subvert movie quotes. I opted for a memeworthy line from the martial arts film Ip Man, in which the dignified gentleman protagonist loses his cool and demands the chance to fight ten people.

The “dojo scene” is one of the highlights of Ip Man, and at the center of it is the line “我要打十个”. In context, this line means “I want to fight ten people,” but if translated literally, it means “I want to hit ten.” I decided to make a series of images that subverted this quote by placing it in different absurd contexts.

The chief inspiration for this project is modern internet memes, specifically image macros. Popularized by the anarchist online message board 4chan, image macros tend to be humorously ironic and absurdist, echoing the 20th century cultural movements of Dadaism and postmodernism. I feel that memes are an interesting facet of modern youth culture, and I wanted to explore the absurdist structure of image macros. Also, memes are pretty funny. 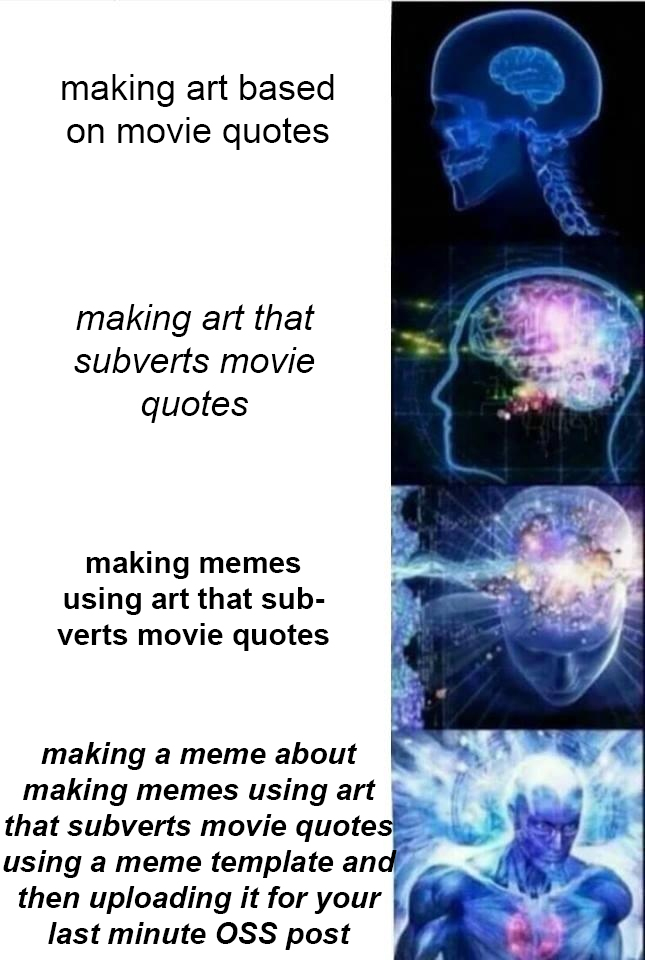 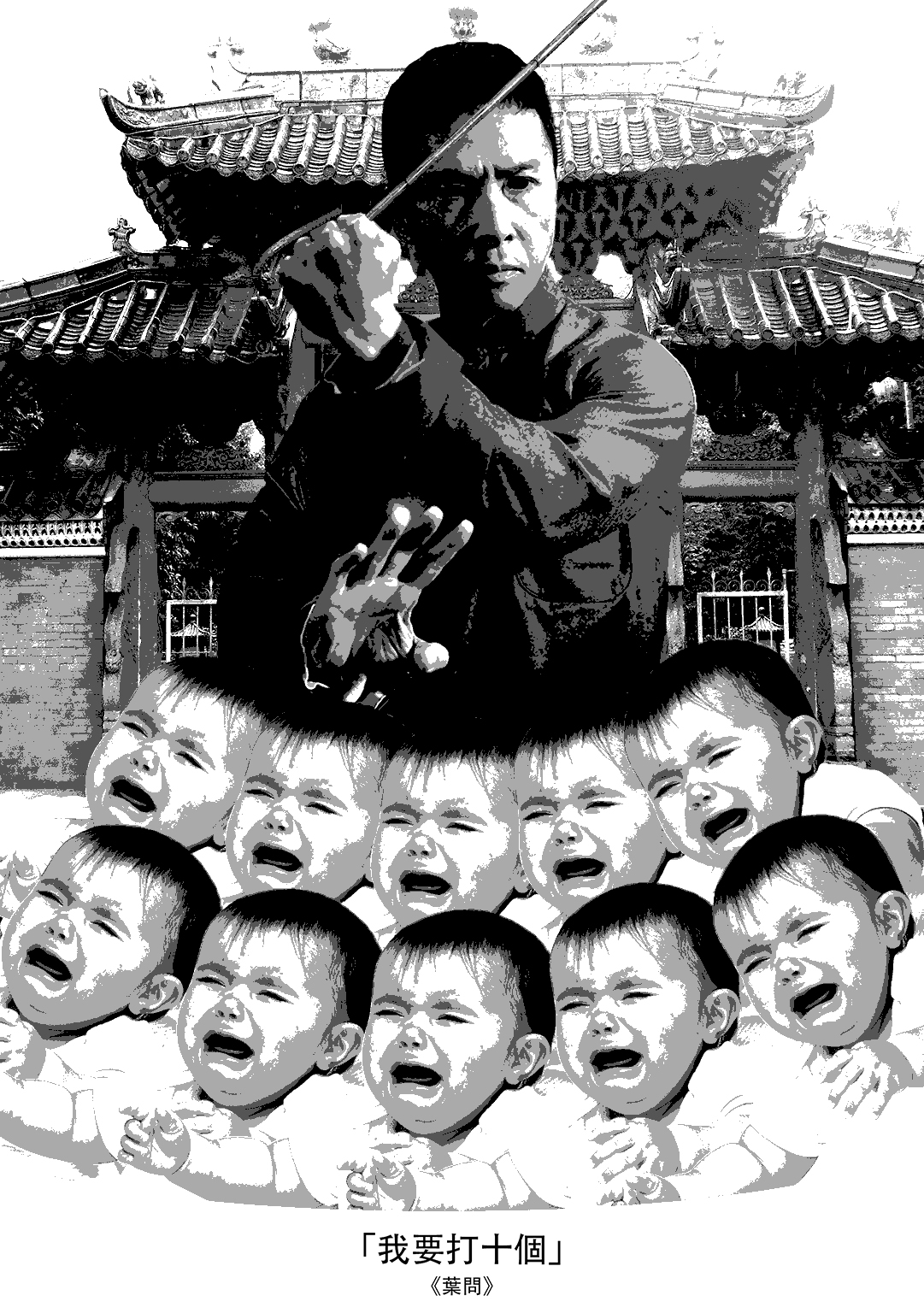 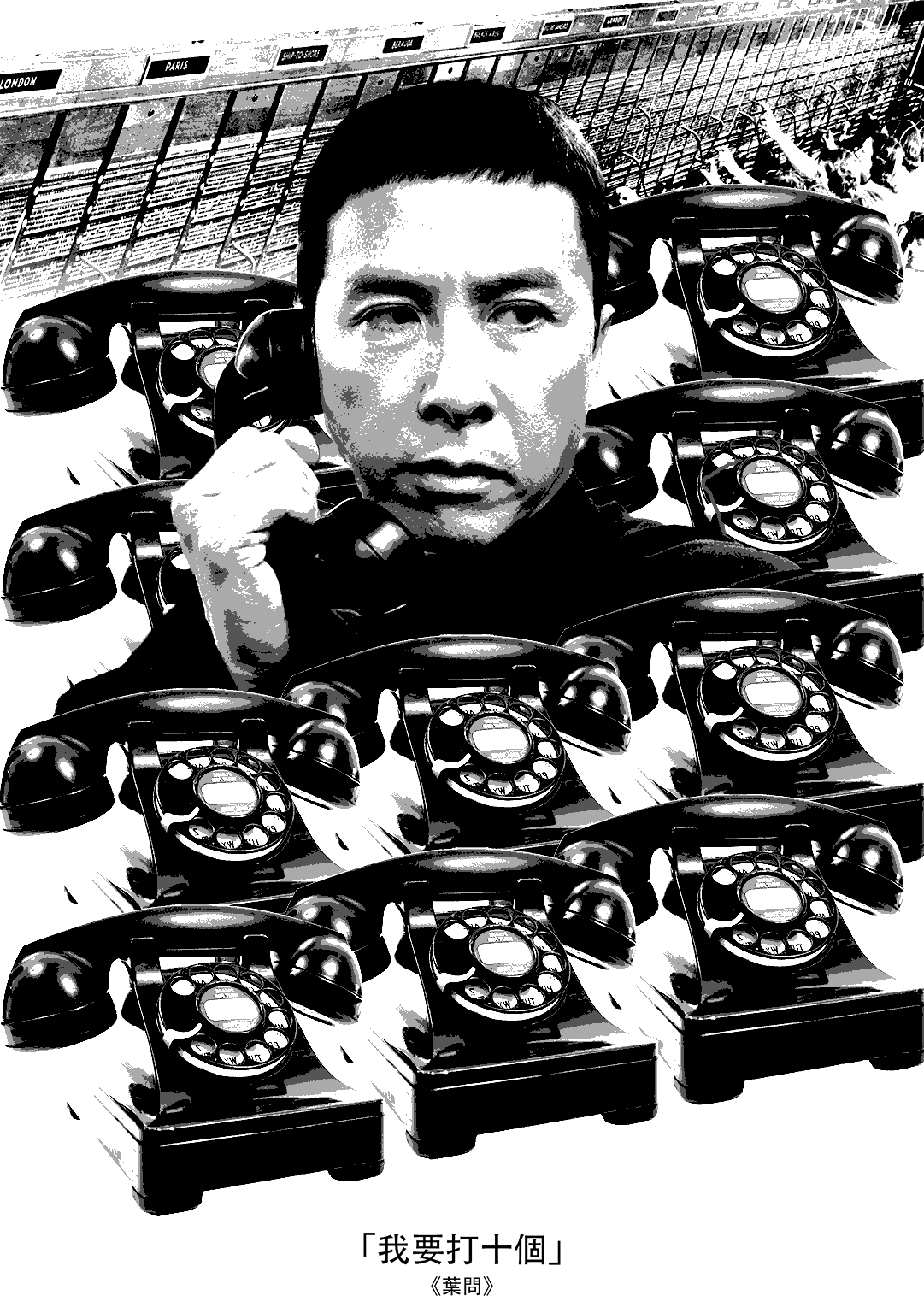 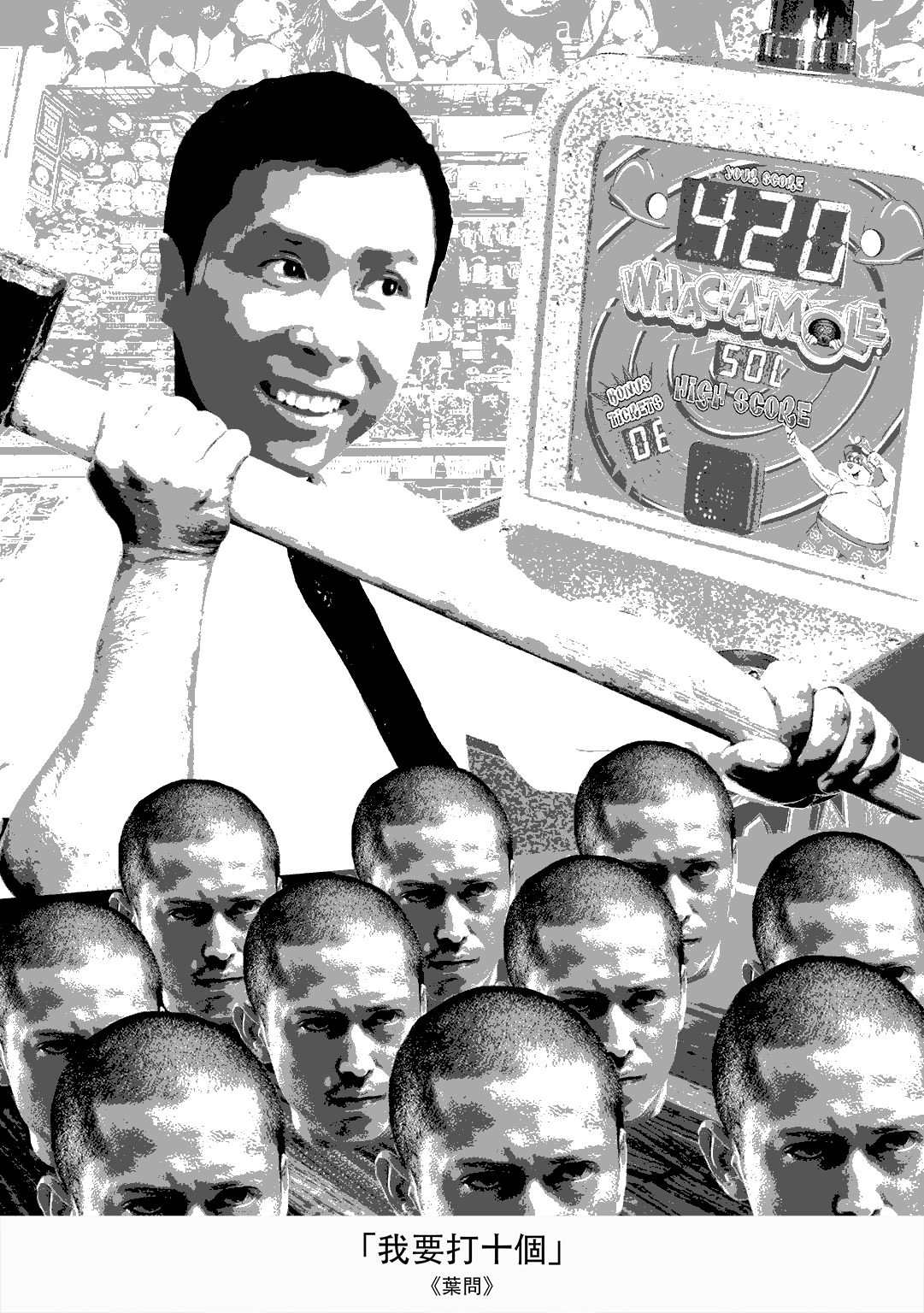 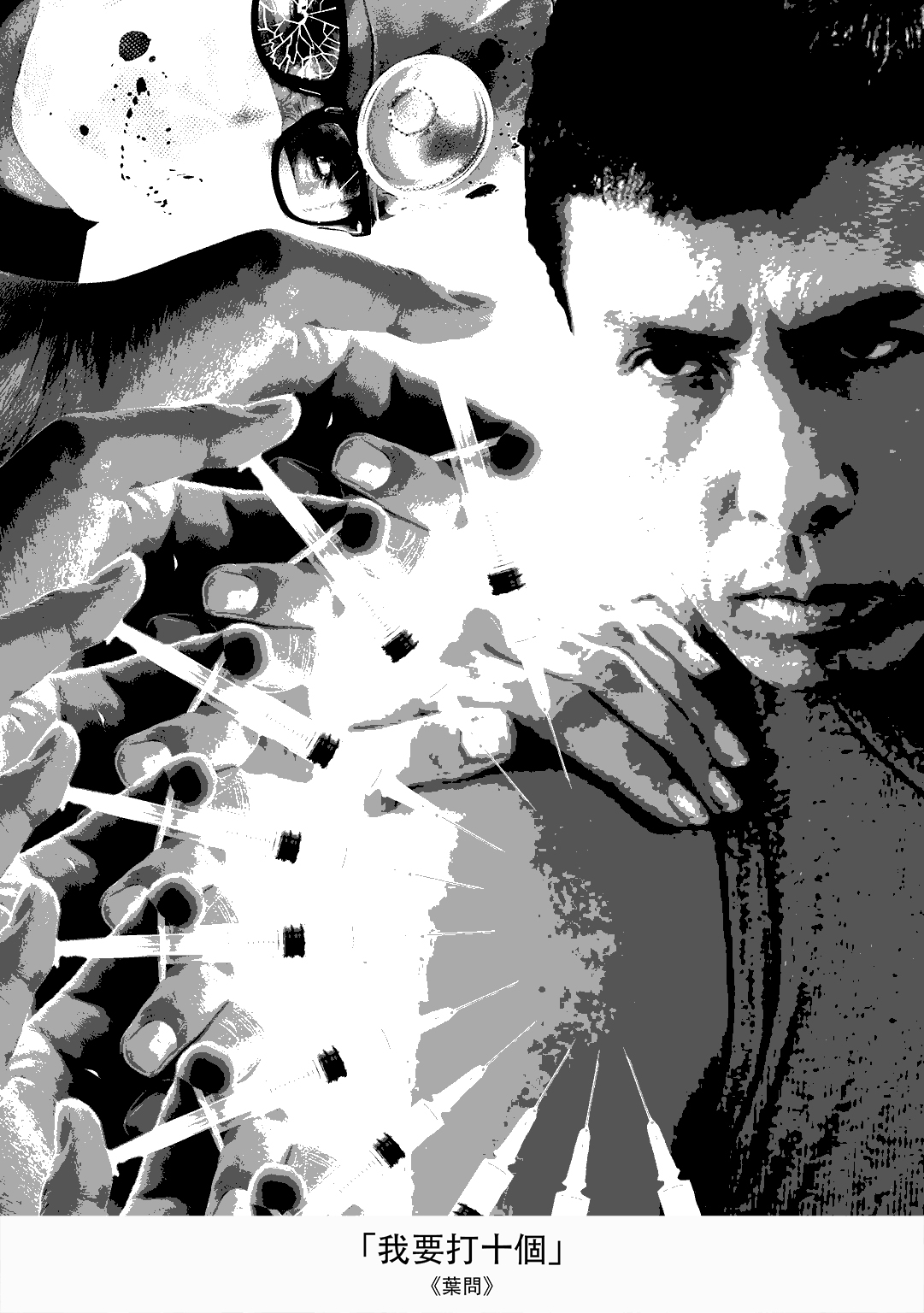 My designs are all essentially Chinese-language puns on the quote “我要打十个”. Two of them have the same literal meaning of “hitting”, but take advantage of the ambiguity of the sentence object to imply that Ip Man wants to hit 10 things that aren’t necessarily Japanese karate practitioners:

The other two designs play with the ambiguity of the “打” verb, since depending on the context, “打” can also refer to dialing (a telephone) or injecting (with a syringe):

Initially, I wanted to incorporate the quote “我要打十个”, in the form of Chinese calligraphy, into each composition (since that makes for better memes). Unfortunately, that’s against the rules laid down in the project brief.

As part of the project, we were expected to print one of our designs in halftone and silkscreen it onto fabric. My test print came out looking mostly fine, although it was a little dark and smudgy in parts. 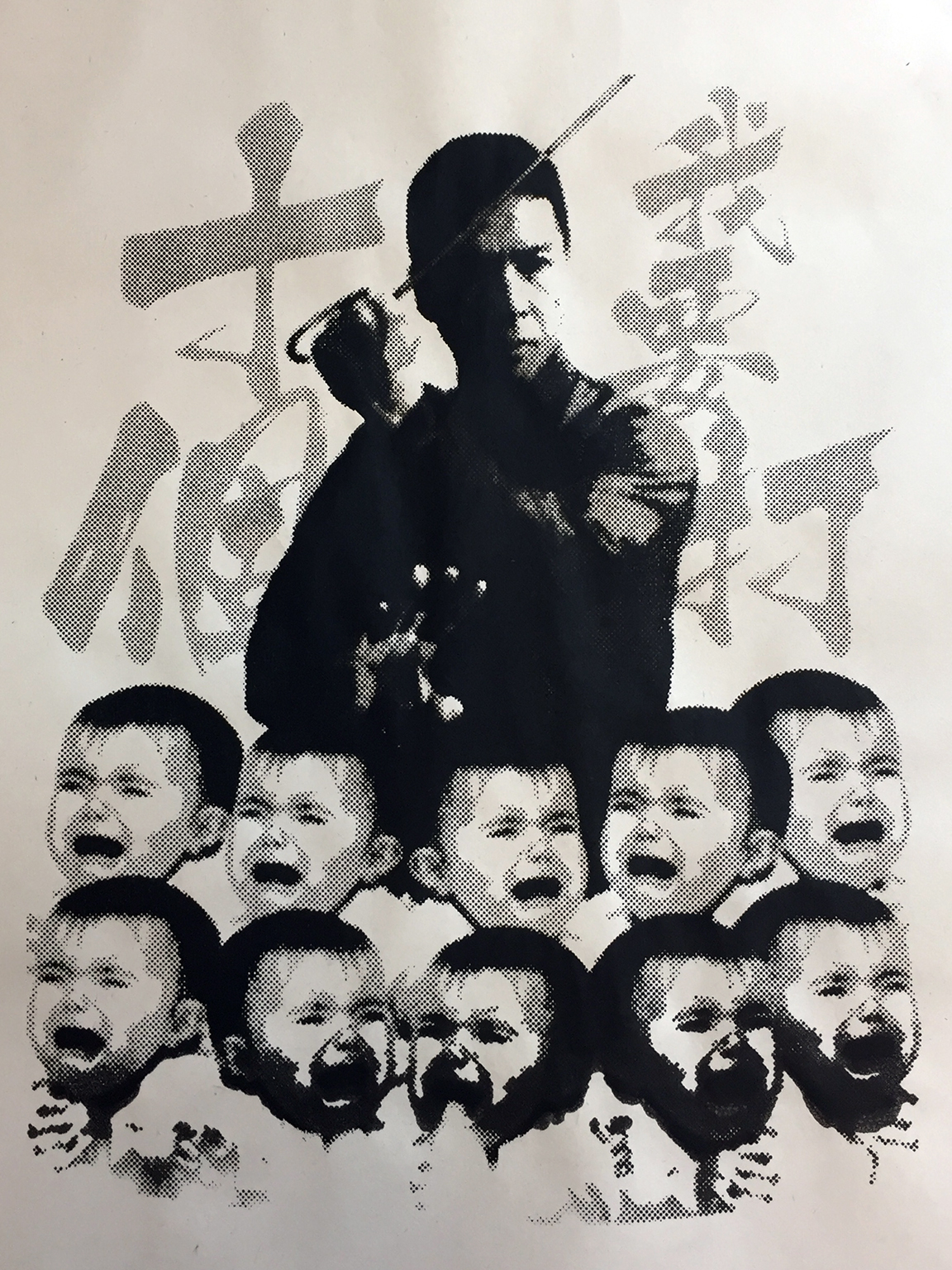 The actual print came out about as well as I could have hoped: Granted, I won’t be accessorizing with this tote bag any time soon.

While this project ended up being fairly straightforward, I did encounter a number of hurdles.

The first challenge was finding the right images for each composition. Because I settled on a certain “posterized photo” style for the final layouts, I couldn’t use drawings or symbolic representations, which some of my classmates leaned on for their work. Furthermore, I was limited by the range of expression shown by the actor Donnie Yen himself in his role as Ip Man. I had to trawl movie posters and take stills from the Ip Man movies looking for the perfect giddy Whack-a-Mole grin.

Furthermore, because I was working with found images, it was sometimes hard to illustrate my concepts in an aesthetically pleasing way that fit the portrait orientation. For example, the Whack-a-Mole machine appears disjointed from the General Miura heads in the foreground because I couldn’t figure out a good way for them to appear on the Whack-a-Mole machine itself.

Lastly, I will never work with silkscreen printing ever again, because it is quite possibly the most laborious and unfun printing process known to mankind. It’s a rare moment in which one appreciates the benefits of automated printing upon society. 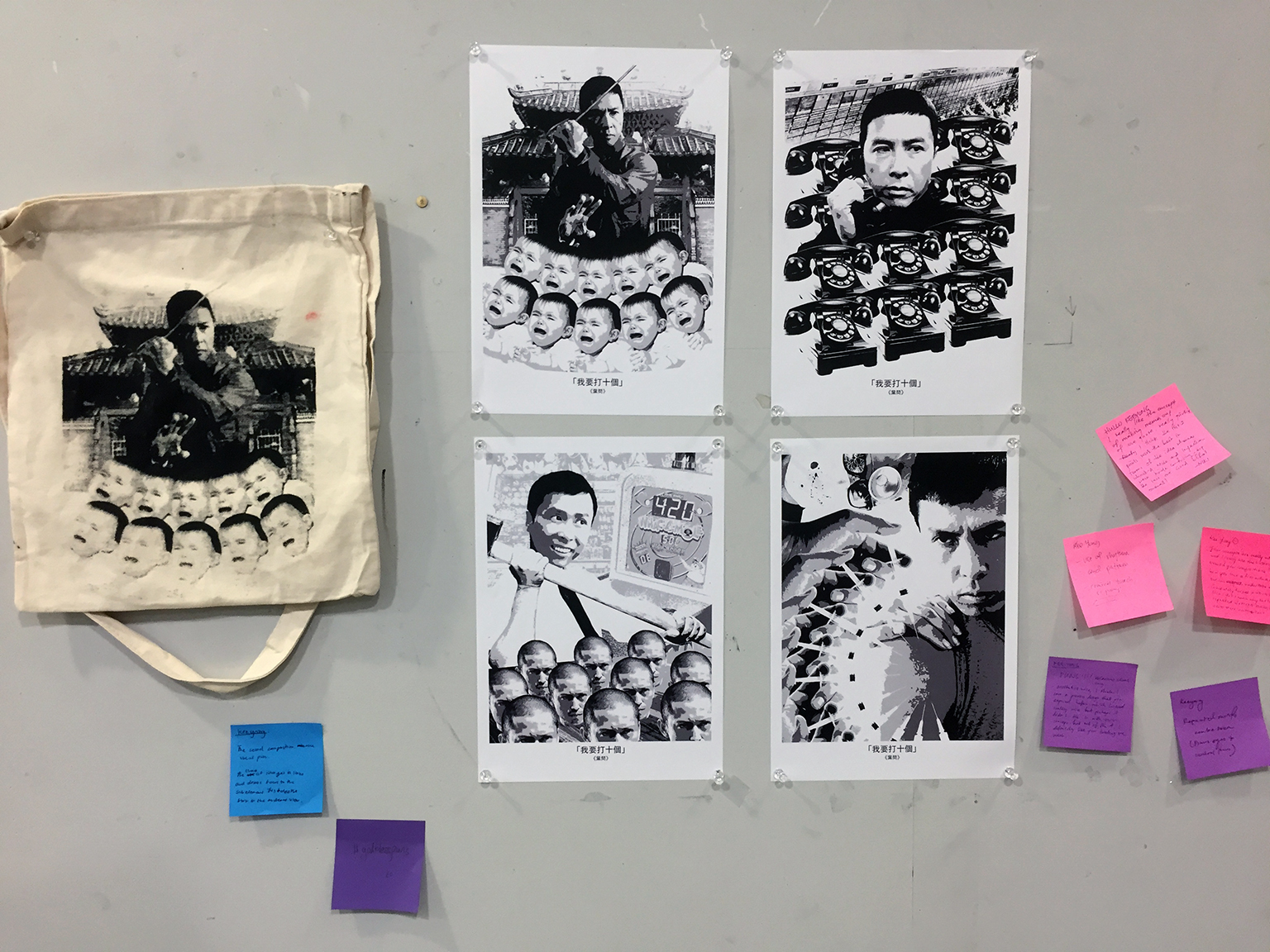 I mounted my images on the wall in A4 paper and gave a straightforward overview for my presentation. While the artistic merit of my submission remains to be debated, many of my classmates thought the puns were hilarious, and appreciated the absurdist memetic quality of the pieces. I suppose that’s the true benchmark of success: how many likes and shares your pieces would get on social media. (Maybe.)

A surprising amount of work went into creating these images, and I walk away from the project with a newfound appreciation for the Photoshop maestros who create the memes we live and breathe on social media. Memes are, after all, more than just fun and games. I feel there’s a fascinating current of social commentary and postmodern fatalism beneath their seemingly meaningless surface. What are memes, if not the cultural footprint of a generation? 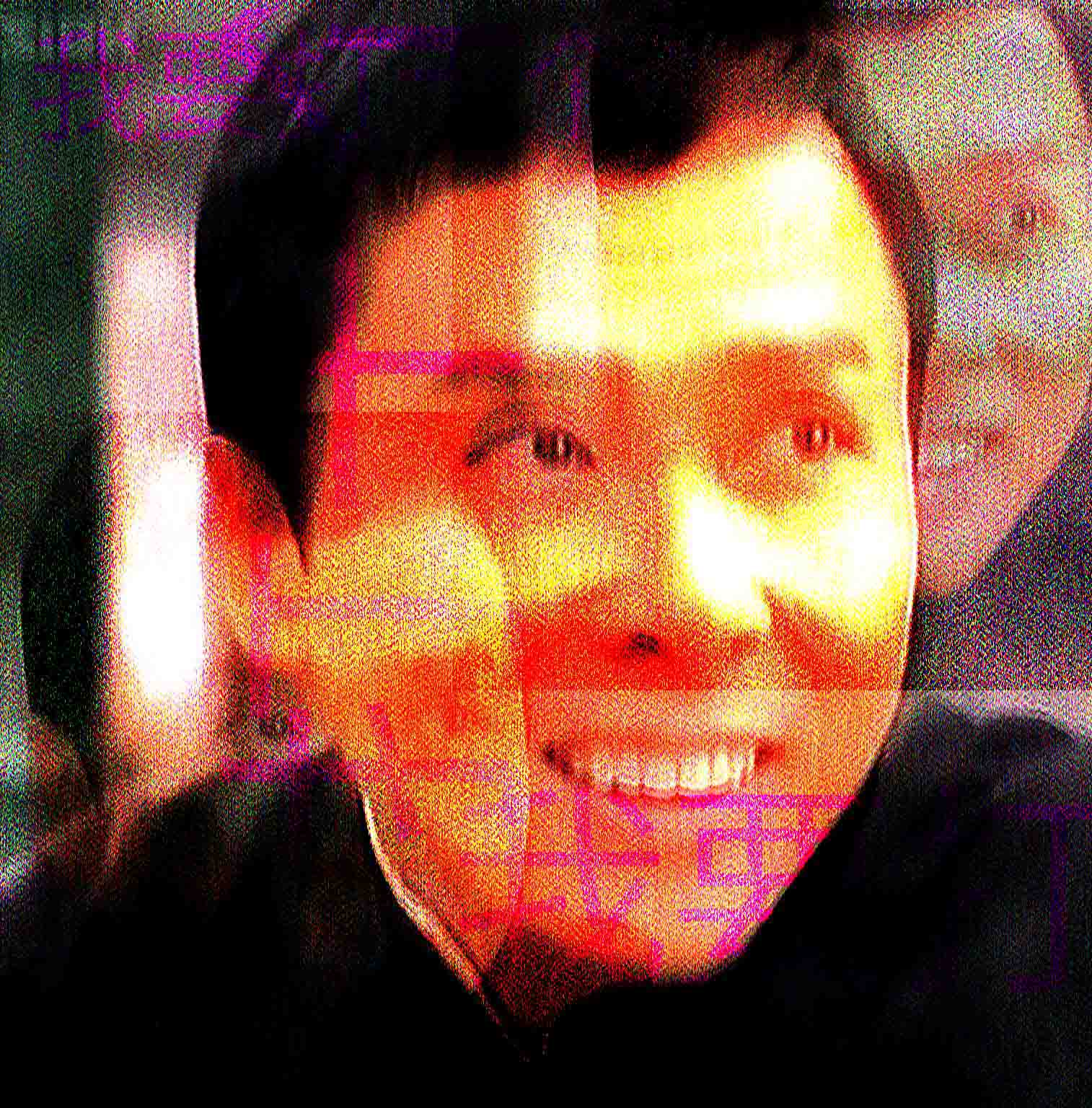