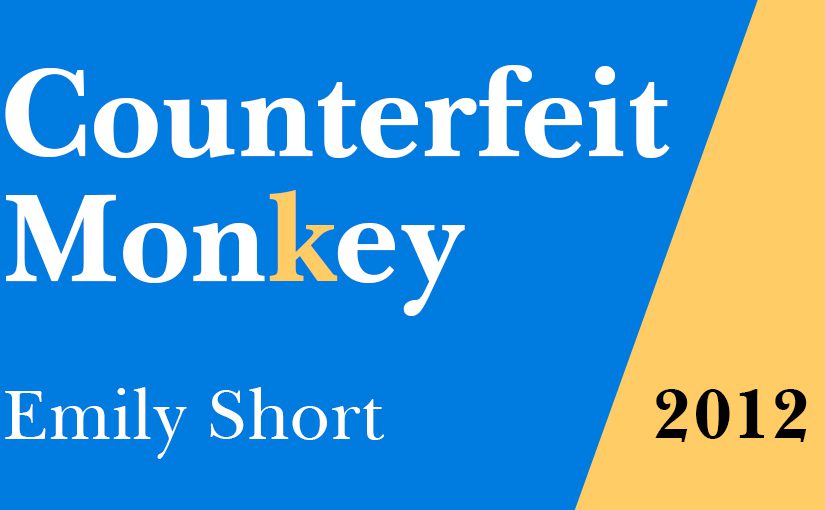 Anglophone Atlantis has been an independent nation since an April day in 1822, when a well-aimed shot from their depluralizing cannon reduced the British colonizing fleet to one ship.

For my Interactive Media hyperessay, I have chosen to study Emily Short’s Counterfeit Monkey.

Emily Short is a game designer and interactive fiction writer. Her work explores how software can be used to procedurally generate robust stories and believable fictional characters. In the continuum of the history of interactive media, Short can be seen as the next step after hypermedia à la Grammatron: rather than creating new ways to navigate media, she is exploring new ways to create media from whole cloth.

Counterfeit Monkey (2012) is a puzzle game set in a world where changing the words in an object’s name can change the object itself. Armed with an array of tools that add letters to words, remove letters from words, change the order of letters in words, and so on, the protagonist must cleverly manipulate the world around herself to escape the corrupt law enforcement of Anglophone Atlantis.

Counterfeit Monkey follows in a long tradition of text-based adventure games, from the venerable Colossal Cave Adventure and Zork to the more modern Blue Lacuna and Hadean Lands. These games can be viewed as an entertainment application of the “virtual space” first explored in Aspen Movie Map. However, Counterfeit Monkey differs from its predecessors by providing — in addition to entertainment value — an interesting narrative with incisive social commentary.

Counterfeit Monkey is primarily a puzzle game about wordplay, and in this respect is more like a Rubik’s cube or crossword puzzle than a traditional narrative or artwork. However, through its presentation, Counterfeit Monkey invites us to think about the importance of language and the relationship of a government and its people. This essay will examine this apparently contradictory duality of purpose.

When we think about video games, we often consider them in the context of entertainment. In other words, we think of Call of Duty the way we think of Michael Bay’s Transformers, or think of Mario the way we think of the Teletubbies — full of visual and aural spectacle, good for pacifying excited children, but lacking in substance or artistic merit.

Counterfeit Monkey defies these preconceptions. Indeed, being written completely in text, it lacks any form of visual or aural spectacle. Instead, it invites us to think critically and seriously about its fictional world, so that we can not only solve its puzzles and win the game, but also realize how the concepts of Counterfeit Monkey‘s world parallel those in our reality.

Counterfeit Monkey was not originally meant to be a serious or thought-provoking work. The project began as a breather from Emily Short’s more demanding assignments, as she recounts:

There were months at a time when I didn’t look at Monkey at all. Whenever I did take it up again, it was usually vacation time or a lull in freelance load, and sometimes what I wanted from it as a project was to entertain me, to be a playful breather from crunchy, deadline-heavy work projects or external stress.

Short’s love of wordplay shows in Counterfeit Monkey’s numerous, often ridiculous linguistic puzzles. In one puzzle, the protagonist’s friend BROCK turns into a ROCK to escape the authorities. In another, a RESTORATION GEL RIFLE is anagrammed into an INFERTILE ASTROLOGER and back. Counterfeit Monkey delights in strange and novel puzzle solutions, encouraging the player to look at the world in a different light from the norm.

In the postmortem for my Year 1 project REWIND, I talked about how an interactive work is defined by the way that the audience interacts with it. Counterfeit Monkey’s strength as a puzzle game is that it creates a new way for the player to interact with the world — a systematic mechanic, in Short’s words — and then explores the ramifications of that mechanic to its fullest potential. It builds a world in which every possible move attempted by the player is logically accounted for, even if it doesn’t advance the narrative. The result is a sandbox that dares the player to try new things and explore the consequences of different actions.

Engagement is what the video game industry calls the concept of immersion we have covered in this class. Engagement is important in any artistic medium because it is the hook that turns a disinterested observer into an interested participant. It leads the viewer to engage with a work. In other words, while Counterfeit Monkey’s word puzzles are not necessarily deep or meaningful, they help to ground the work by adding player engagement — they are a fun, clever hook that draws people in so that they can experience Counterfeit Monkey’s ideas and themes. (And, of course, they provide loads of entertainment value on their own.)

Counterfeit Monkey‘s central theme is “government gone wrong.” Thrust into the role of Alexandra the smuggler, the viewer explores the seedy underbelly of Anglophone Atlantis — a state that oppressively controls the use of language and frequently comes into conflict with the citizens it is supposed to be protecting. Through various puzzles, the protagonist takes advantage of a chaotic protest, sneaks into a high-security prison, breaks out of that same prison, uncovers a government conspiracy, and rewrites the identity of Anglophone Atlantis itself.

Because the protagonist Alexandra is actually two personalities who have been fused together — Alex and Andra — Counterfeit Monkey uses their divergent viewpoints to show what happens when one constituent of a democracy strongly disagrees with another. In the critical Cold Storage scene, when the personalities disagree on whose life to sacrifice for the greater good, the player’s decision causes the personality who “lost” to permanently fade into the background. This is a microcosm of the larger theme of “government gone wrong;” a cautionary tale of how even the best intentions can unintentionally cause suffering.

Despite its heavy themes, Counterfeit Monkey never comes off as didactic or too serious for its own good. The player never feels as though they have stepped out of a work of entertainment and into an argumentative essay. It is a great strength of Counterfeit Monkey that the message of the work is woven into the experience of the game itself.

Just as the character Alexandra is driven to take apart and restructure the world of injustice around her, the viewer is driven to use Alexandra’s word-manipulation tools to change the world and win the game. We feel the oppression of Anglophone Atlantis because the laws and law enforcement of the fictional world directly restrict our actions within the game. When we find loopholes in these rules and eventually overcome them, it is as much a victory for us as it is for Alexandra.

In my opinion, Counterfeit Monkey achieves the holy grail of gameplay and story integration. It is always difficult for artists to convey the experience they want their artwork to convey — they simply cannot predict how viewers will react to their work, especially without a little placard at a museum to guide them. This goes double for commercial artists that are also obliged to entertain audiences or provide them with “their money’s worth.” Counterfeit Monkey does not suffer from this problem because the theme is woven into the interaction. The player must discover the loopholes in the system, and make difficult choices about ethics and democracy, in order to win the game. Even if they have to do it with word puns.

Emily Short is one of the artists I most respect because she does not discriminate between “high art” and “low art.” She approaches her hobby of designing video games with a clear and analytical mindset, producing works that are both entertaining and thought-provoking. This is why I find Counterfeit Monkey outstanding. Most interactive works are either addictive but devoid of substance, like Candy Crush Saga, or novel but utterly tedious to actually experience, like Magnet TV. Counterfeit Monkey is an example of a work that successfully threads the needle between entertainment and meaning; between the crowd-pleasing blockbuster and the Academy Award-winning film.

I believe that as interactive media artists, we have much to learn from the game industry: how to foster engagement in our audiences, by making our works fun to interact with; and how to convey themes through interaction, by making the message of our work part of the very experience of interacting with it. These are the aspects of craft which I believe all too many artists neglect. These are the differences between an art piece which you go to a museum, nod your head at, and then forget about — and a thought-provoking experience that changes the way you think about the world.