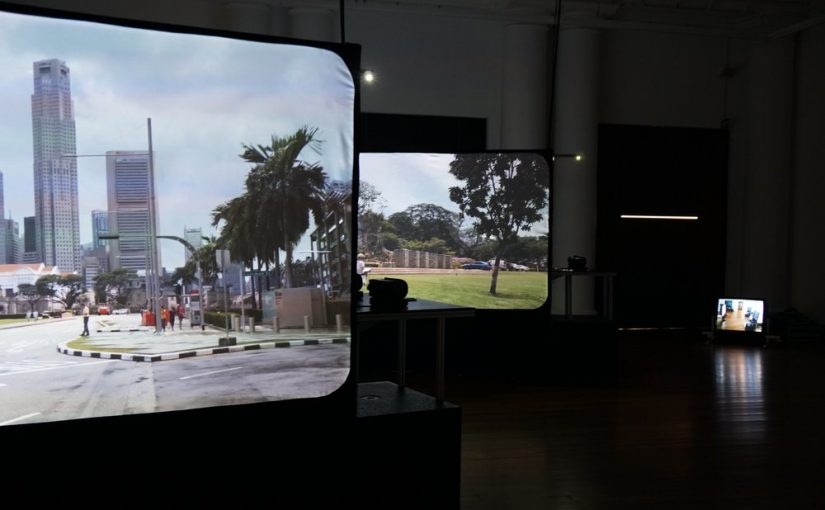 In this post, I will discuss INTER-MISSION’s The Lapse Project and why I did not like it very much.

The Lapse Project was an interactive installation featured at The Arts House Gallery. I didn’t attend the exhibition myself, but thankfully INTER-MISSION has provided some photos as well as a journal that describes the work and explains the motivation behind it.

As I understand it, The Lapse Project is a series of altered videos and VR environments in which various landmarks have been removed from Singapore’s landscape (as well as some other miscellaneous audiovisual works). The artists invite viewers to imagine — in the words of the journal — “the aesthetics of disappearance” and “a web of discontinuities, dislocations, and de-synchronizations” that makes up their perception of reality.

I think this is bullshit.

It is said that brevity is the soul of wit, and a picture is worth a thousand words. It is therefore telling that the creators of The Lapse Project have supplemented their video installation with a 48-page manifesto and still fail at communicating the meaning of the artwork to a general audience.

What exactly are these words supposed to mean?

Even without considering the meaning of the text itself, the layout of the journal is unreadable. The text is continually interrupted by graphical embellishments and forced into columns that have barely enough room to fit all the pretentious bombastic language on display.

And the text itself? A sentence takes up five lines because the author wants to display his command of the thesaurus. We are shown the Latin conjugations of the word “lapse” and are expected to applaud.

If the role of artwork is to communicate a message, surely we are justified in judging it according to how that message is communicated. A lot of hard work and craft has assuredly gone into the making of The Lapse Project, but that work is wasted if the concept cannot stand on its own. Don’t tell me what I’m supposed to feel when I look at your artwork: make me feel it.

Instead, reading through the journal that INTER-MISSION has provided — ostensibly to help viewers make sense of their art — I am left with the impression that they have an inflated sense of self-importance. The brochure may gesture at grand philosophical ideas, but it is cloaked in fancy “academic” language and painfully bad at getting to the point. I can only conclude that the artists do not care about making their work accessible — they only care about making themselves sound smart.

Why else would someone write this:

In Panorama Lapse, The National Museum of Singapore, National Gallery Singapore, Singapore Art Museum are erased digitally from their respective locations in the city, as though they were never extant within the Singaporean landscape. As relics from Singapore’s colonial past, these institutions also complement The Arts House as bastions of culture and the arts in Singapore today. Panorama Lapse is presented as a video projection triptych that shows the surrounding street views from various vantage points in the vicinity of the three major cultural institutions. In their absence, what is left behind is a haunting expanse of space, left perhaps to incubate other imaginative possibilities. INTER-MISSION’s collaboration with Nor Azman negotiates the imaged landscape as a digital canvas, opening up discussions concerning vantage points, territorial boundaries and the ethics of digital manipulation. In this altered world, passers-by and visitors are still seen on location going about the usual interactions but with the absence of the physical buildings. How would the viewership of art, systems and structure of our national art ecology exist in a parallel reality where these buildings are absent?

Panorama Lapse is a video projection triptych developed collaboratively by INTER-MISSION and Nor Azman. It depicts a world where The National Museum of Singapore, National Gallery Singapore, and Singapore Art Museum have been digitally erased from the city. How do you feel about the city being “edited” in this way? What would a Singapore without these landmarks be like?

These two paragraphs say the same thing, except one is actually readable and one is not. One respects the reader’s time and one does not. And it turns out that if you boil it down to the essential message, the first paragraph is not saying very much at all.

I hate the world of fine art because of this culture of artificially inflated importance. A work is not deep or poignant simply because it is high-concept, and adding long words and butchering typography does not make you avant-garde or cool.

If an artist genuinely believes in the value of their message, then they should prove it and make art that speaks for itself. It’s disingenuous to the artwork and the art world to settle for anything less.