A public interactive performance that is based on a site-specific narrative with integrated elements of DIWO, Third Space and Glitch.

The Shed at Dulwich

A spoof restaurant in a garden shed in Dulwich. It was created as a hoax by journalist Oobah Butler which became the top-rated restaurant in London on TripAdvisor before the listing was taken down. The restaurant was open for one night and served a faux menu themed with “emotions”.

The hoax played off the trend for micro-restaurants. 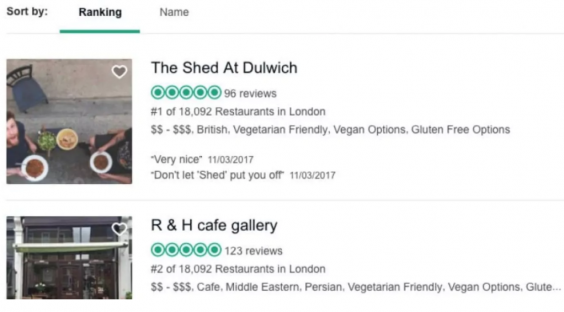 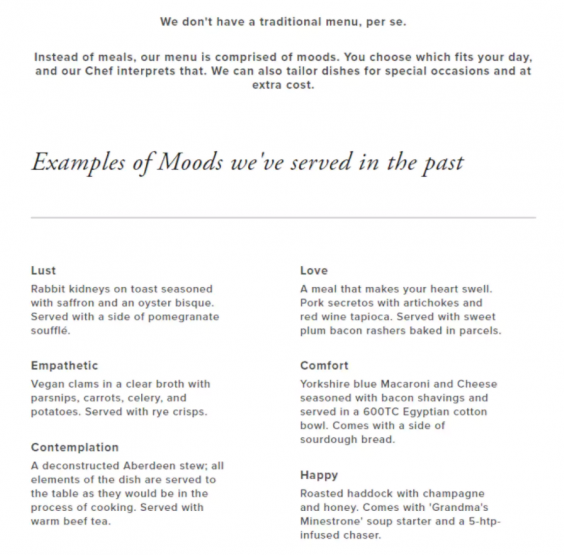 The basic concept of a butler cafe is that you are extraordinarily wealthy and you’re returning to your mansion for dinner/afternoon tea. The butlers great you with 「お帰りなさいませ、お嬢様！」”Welcome home, my lady!” and take your coat and carry your bag to your table and make small talk with you and serve you tea and generally make you feel like a fantastic person.

A reality game show whereby the audience watch the interaction between a group of contestants living together in a custom built home, isolated from the outside world, under constant surveillance. An exploration of human dynamics.

A Japanese reality show about strangers, men and women, living together in a house, where the development of their relationship is monitored. 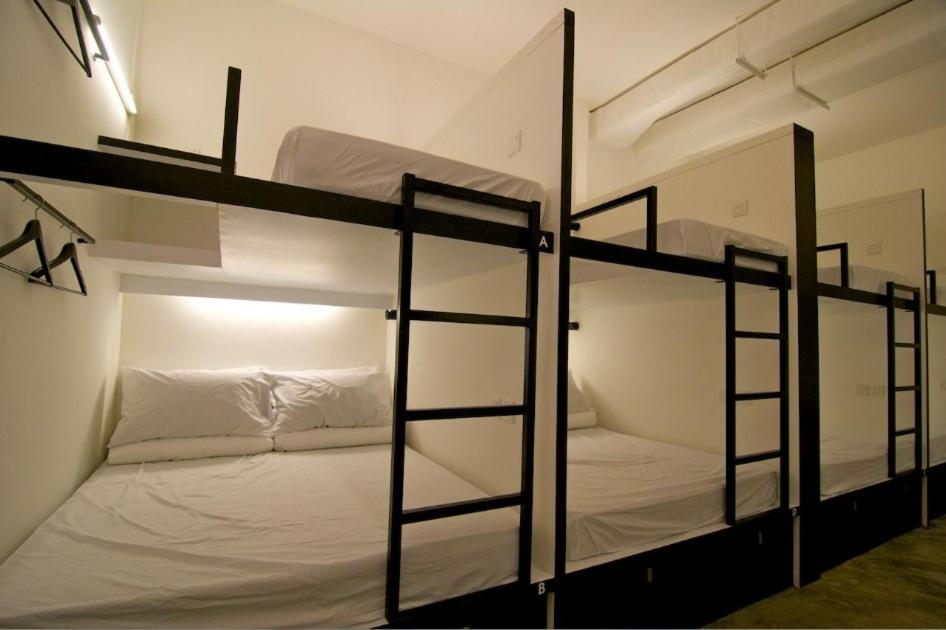 Location : Inside tents of East and West Coast Park

Real life arcade game where we are the characters that the player (public audience) controls.

The one that got away = The Labyrinth

A runner and catcher narrative at roots, this stimulated dystopian chasing game where Renegade AIs (runners) have to escape from the Guards (catchers)  through the floors of Bugis Street in the time span of 1/1.5 hours. The gameplay was to be monitored through updates on telegram as well as a secret recordings by the team members. The runners would have to take “discreet” photos of themselves completing their missions to which would be given to the catchers by us as clues to track them down. The chasers have to find the runners using these clues and attempt to catch them by asking whom they suspect to complete a common idiom in a specific way, such as:

Glitch :  There would be 3 pairs of runner and catcher, 6 players in total. Our plan was to recruit help from our own friends who don’t know each other so that they won’t know who they are running away from/ catching. Plus the 3 runners are to concurrently update their clues on the instagram, creating confusion for the  chasers, as they won’t know which clue to track down.

DIWO : Runners and catchers can choose to form alliances among themselves to help each other achieve their end goals.

Third Space: The runners and catchers would be communicating with among themselves and us through separate telegram groups. The clues from runners would be posted on instagram as they complete their missions.

We decided on a test run on a Saturday with Si Hui’s and Ying Hui’s friend (although I was missing for the whole test run process because of my 3d project.)

After we all sat down with the players after the game, we were told that the narrative was not engaging enough – why were the renegades AIs running away? how is it going to end? Which we were unclear of among ourselves. But even if we did, I foresee that we might be restricting the players with too much world building, hence there would not be chances for any meaningful accidents, glitches.

Plus, the chaser felt that the gameplay was not as engaging for him as the runner as he merely had to chase the runner around using instagram clues which he was not even using to find the runner.

And lastly, we simply did not have the manpower and tools to secretly follow 6 separate players. On the test run itself, the other 4 members struggled with the recording, 2 of them having to avoid their own friends in order not to give away where the stations were.

A uniquely ironic space where we are most of the time in our own private bubbles even though our physical bodies are squished together with other bodies of the crowd, which we repeat without questioning day after day like a routine. There were many interesting themes that could be explored within this space, from its coverage over the entire of Singapore, the intersections of old and new lines to familiar strangers.

I think that Si Hui has also mentioned a very interesting fascination of ours at one point of our lives,  the thrill of having a meaningful intersection with the “fate” one on the train whom you’ve never met before, in a very “Before Sunrise”-esque/Korean drama way.

And so, we decided to focus on the general feelings of sonder we go through everyday. So what is Sonder? 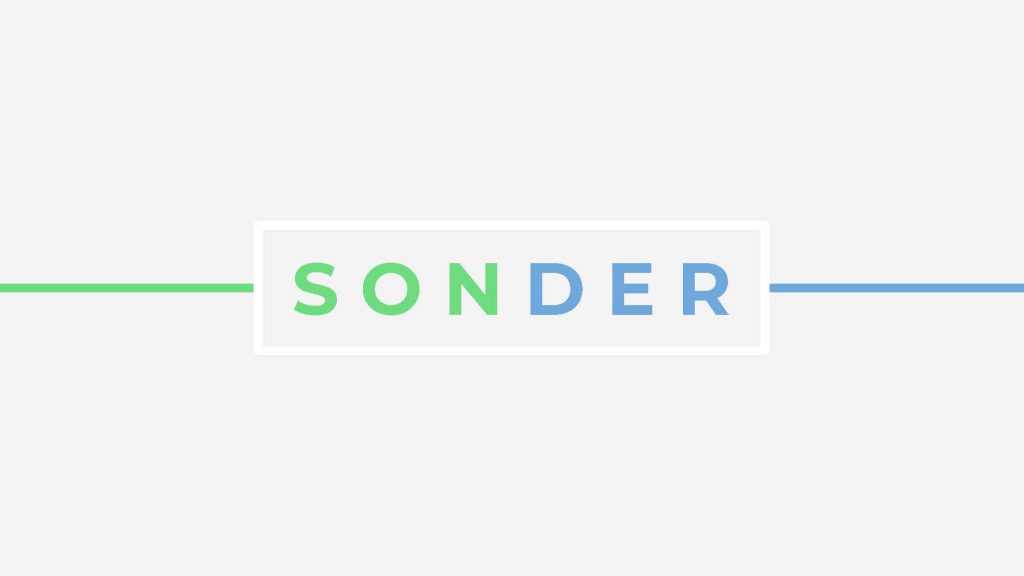 “the realization that each random passerby is living a life as vivid and complex as your own—populated with their own ambitions, friends, routines, worries and inherited craziness—an epic story that continues invisibly around you like an anthill sprawling deep underground, with elaborate passageways to thousands of other lives that you’ll never know existed, in which you might appear only once, as an extra sipping coffee in the background, as a blur of traffic passing on the highway, as a lighted window at dusk.” 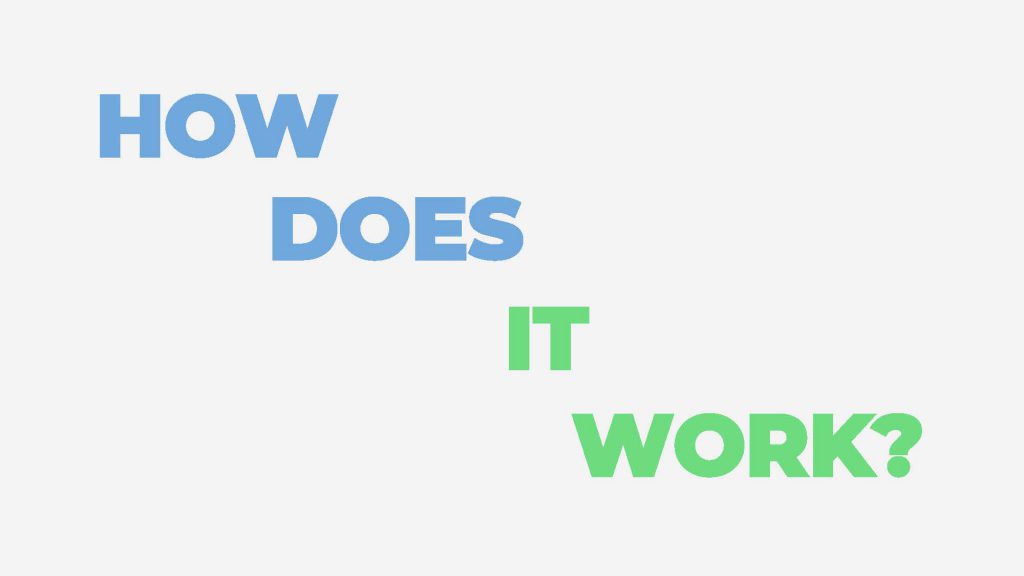 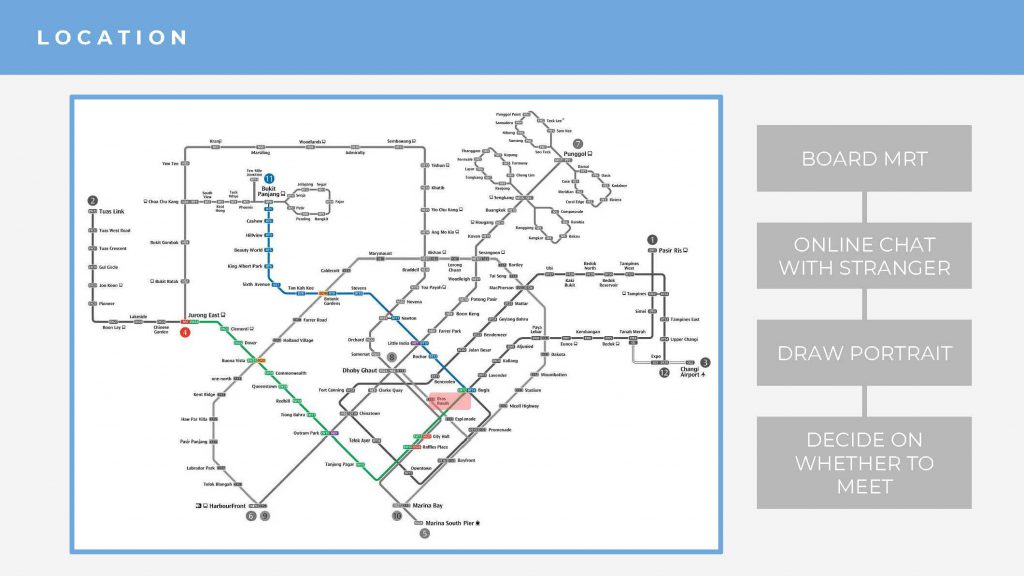 We have two players who are strangers to one another to board on separate mrt lines, east west line and downtown line, and travel along to meet at the intersection, which is Bugis in this case.
We actually wanted strangers on board to participate but when we realise it was very hard to find someone who was travelling specifically to Bugis, and willing to be filmed. Plus, recruiting people at the Bukit Panjang station was a tricky one as the trains arrive 2 minutes apart from one another, which means there was barely any bystanders waiting to board. We couldn’t board the train to ask people too as we needed the other team at Jurong East ready with their player at the same time. The only one who showed any interest to us that day was this kind MRT employee, but she couldn’t possibly leave her station so :,).
Therefore, we decided to stick to inviting friends of our groupmates, who don’t know each other.
And then on their journey, they are to engage in an online chat with one anothe via Telegram, each taking on their persona as East West line and Downtown line respectively. Then as they converse, they are required to draw portraits of each other based on the impression they have of one another. And as their journey approaches to the end, they are asked whether they decide to meet each other at Bugis. If they both decide to, they have to find each other while referring to the portraits that they drew. 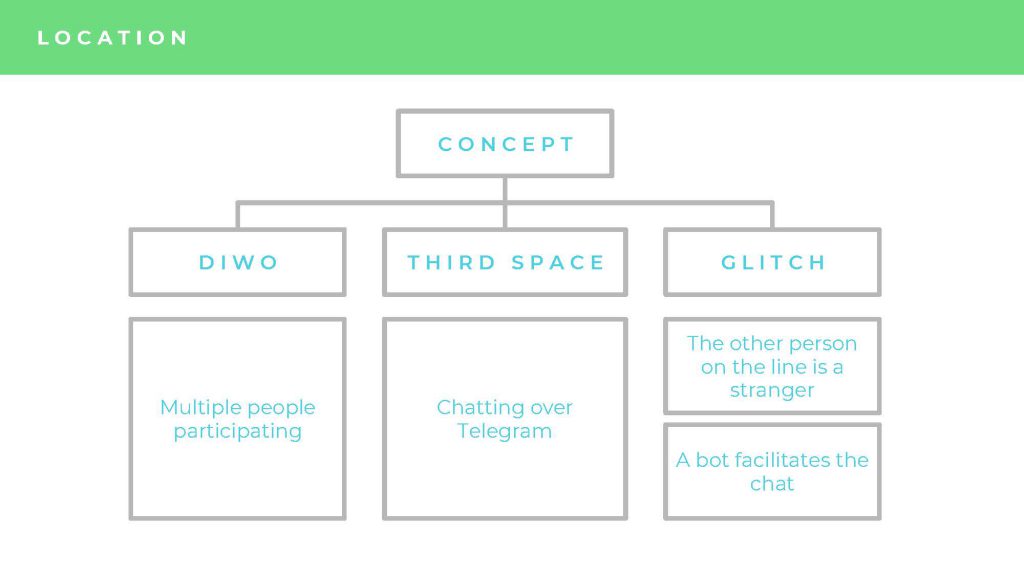 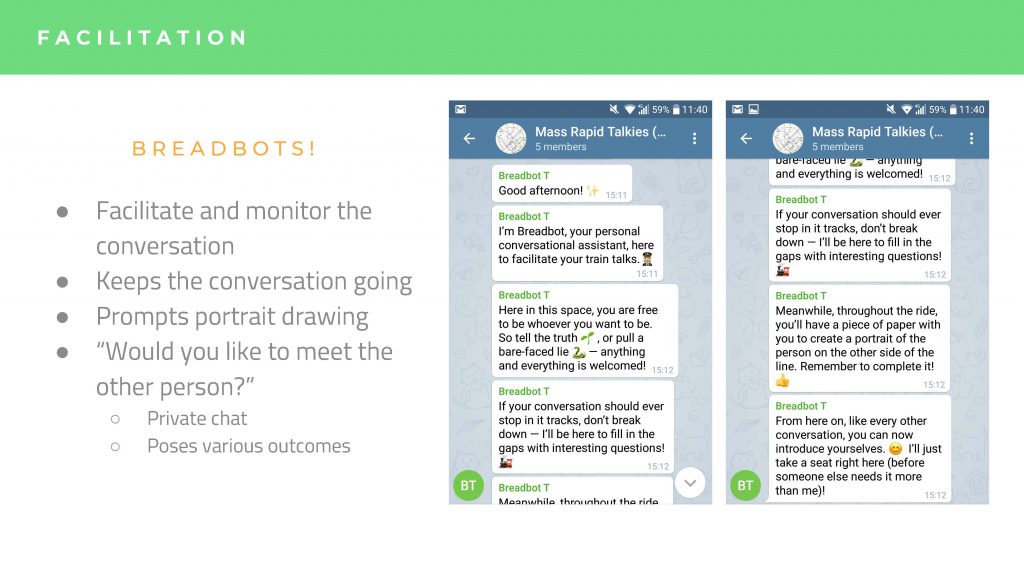 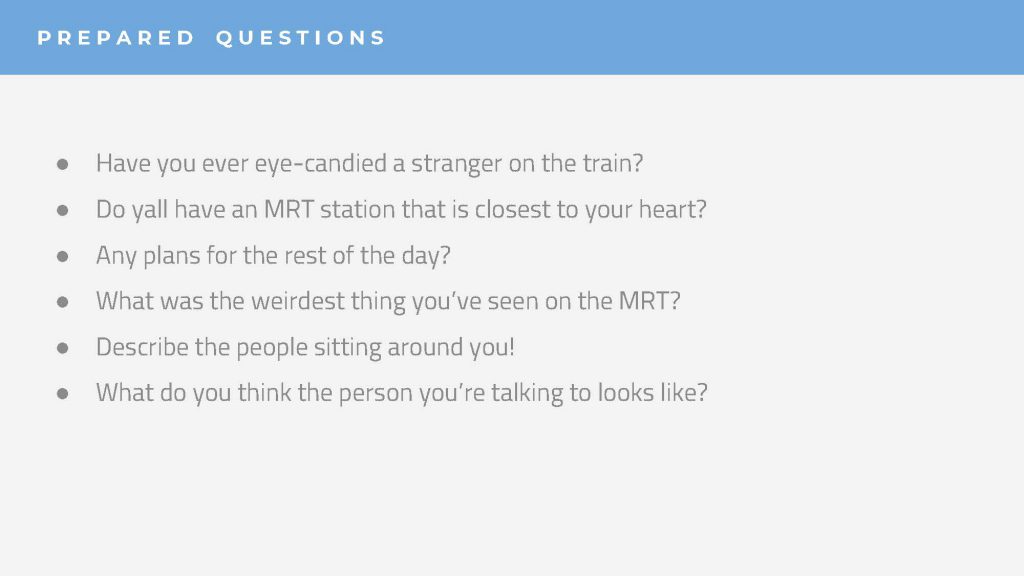 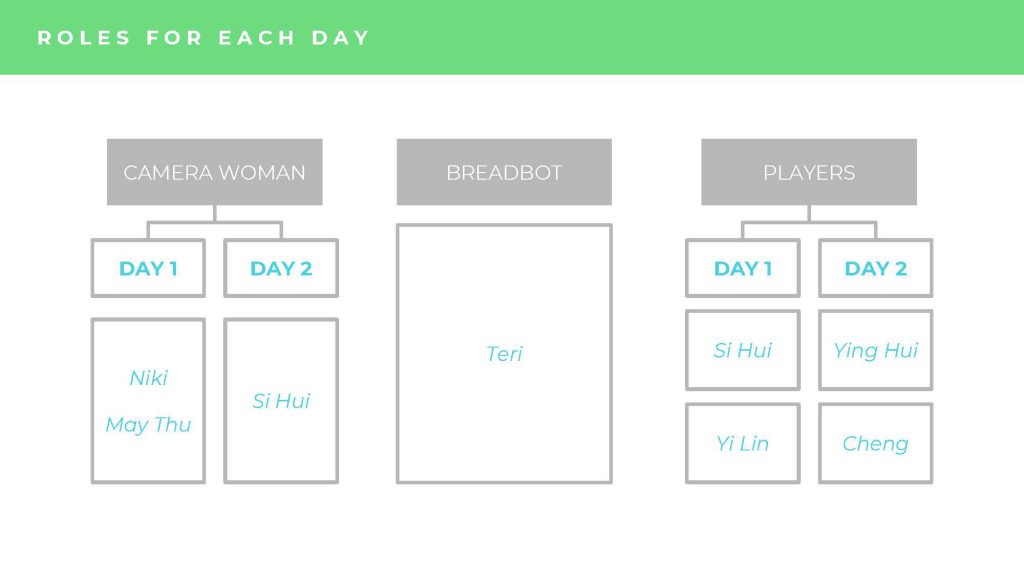 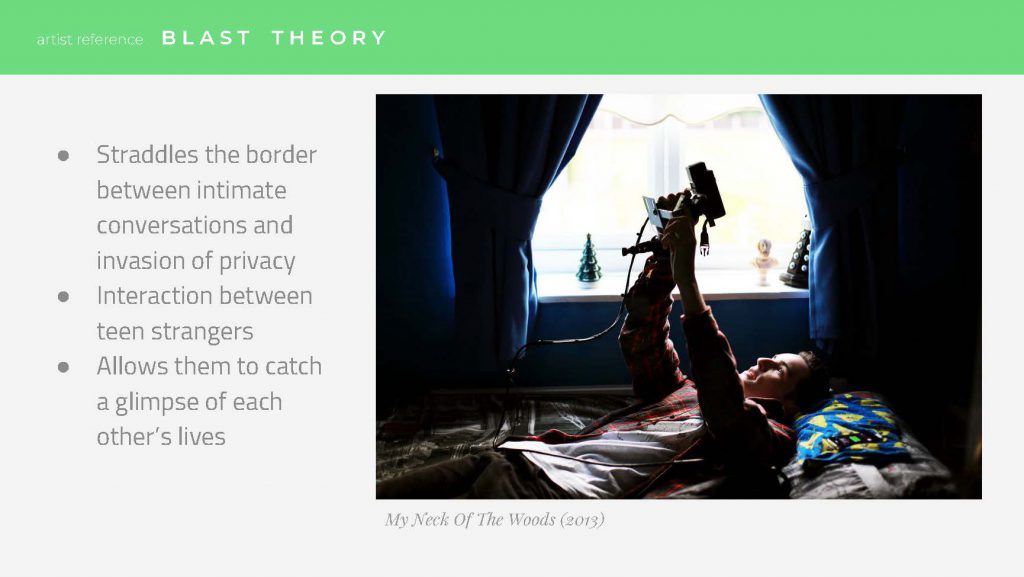 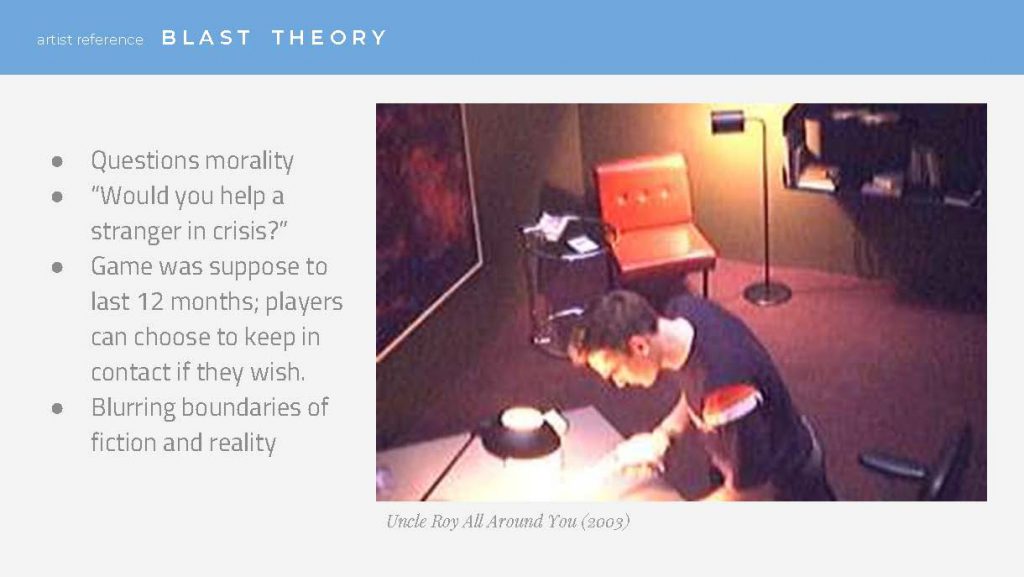 Here are a few of the highlights of their conversations 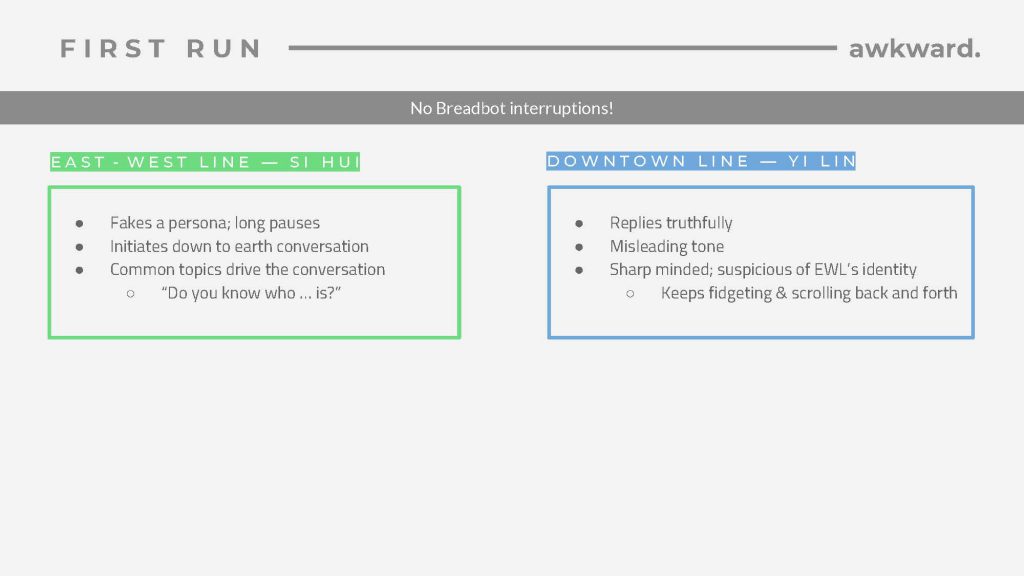 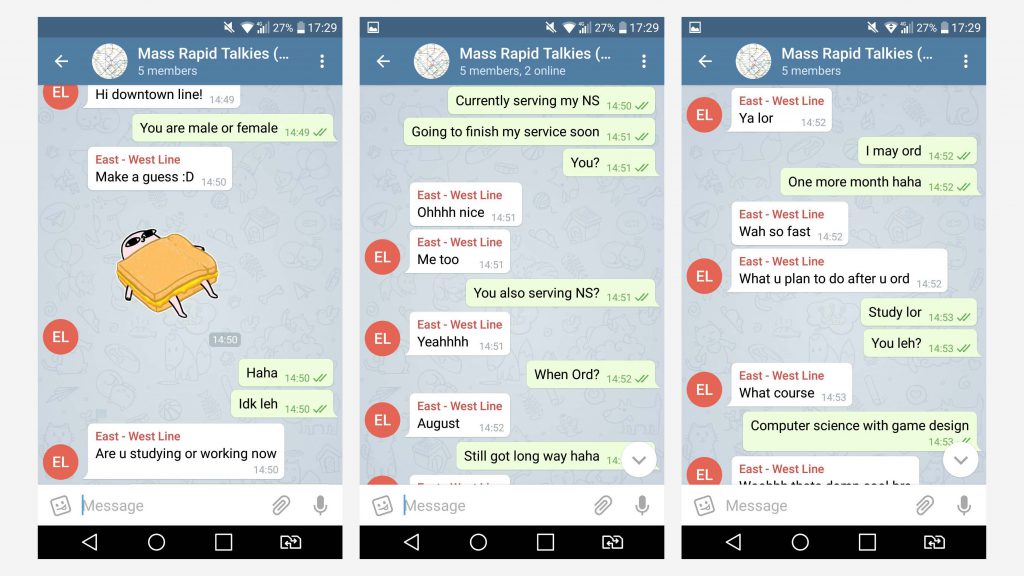 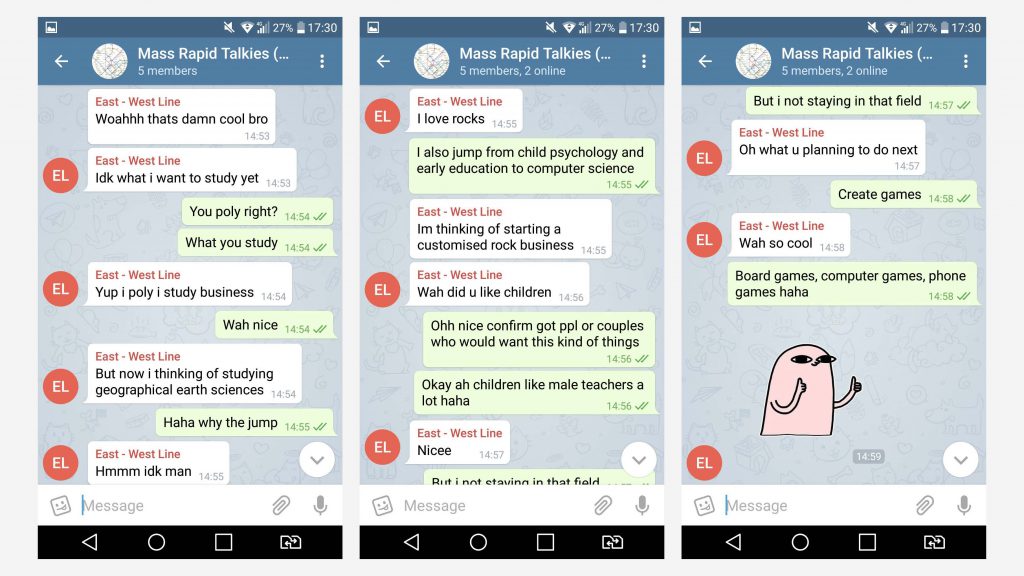 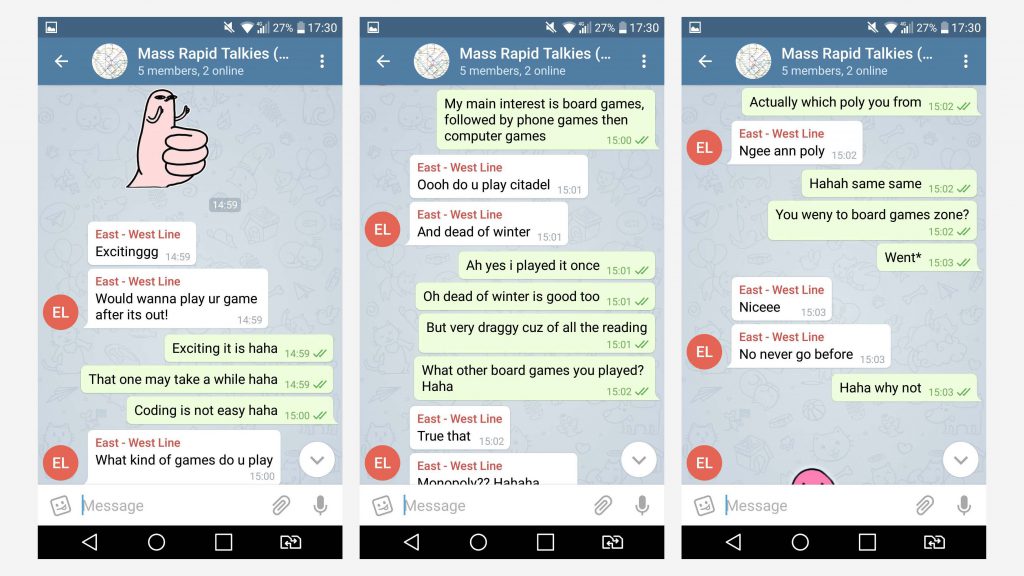 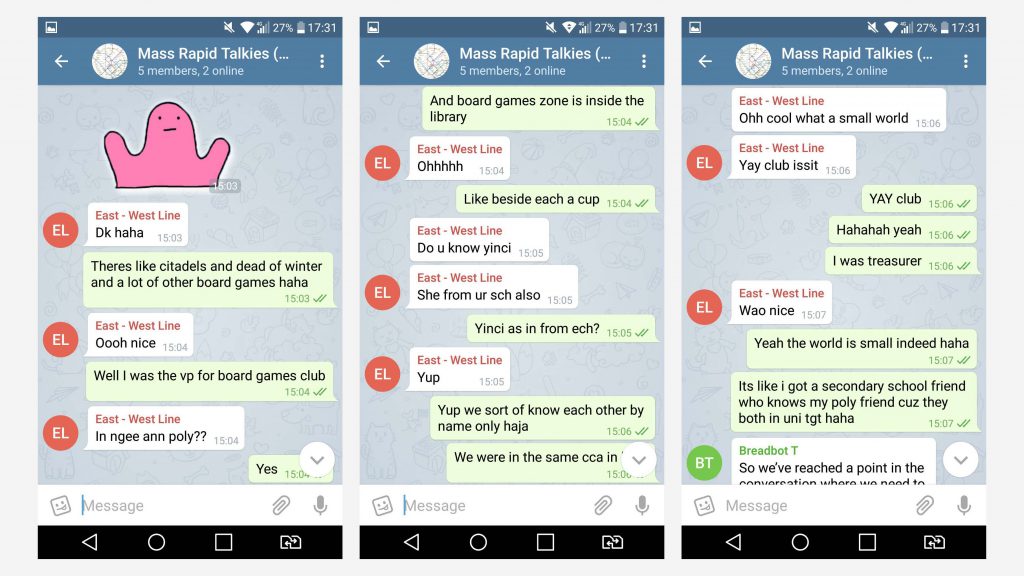 And my favourite moment 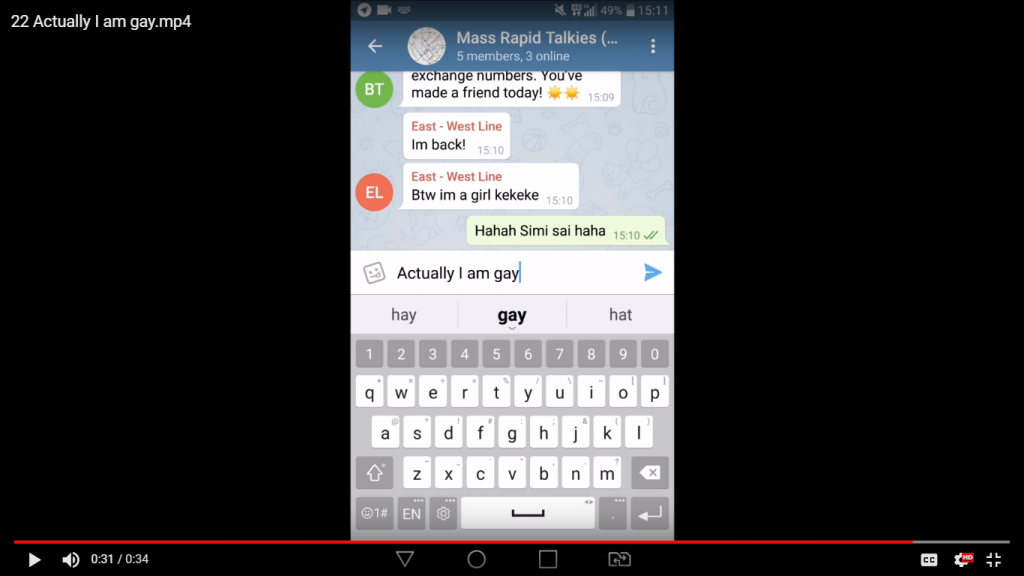 I wasn’t there on site with the rest of the group on that day, but I managed to witness the ongoing chat real time. From the get go, this chat was way more livelier than the others. 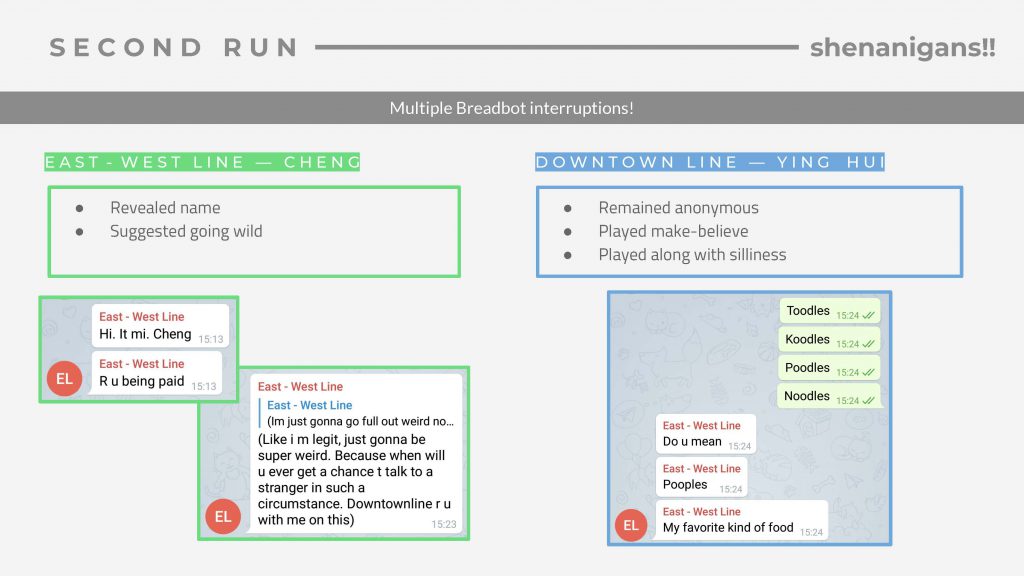 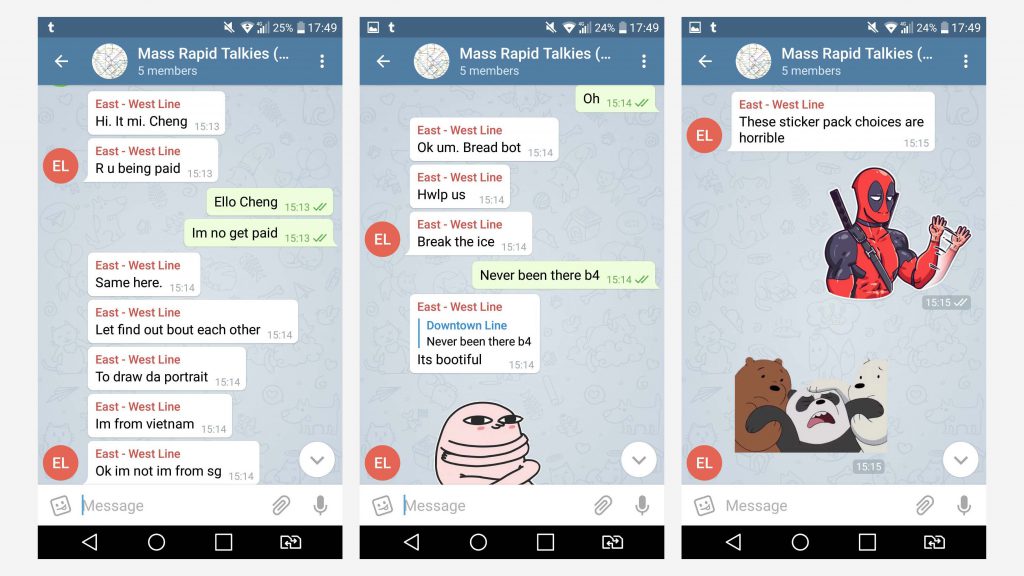 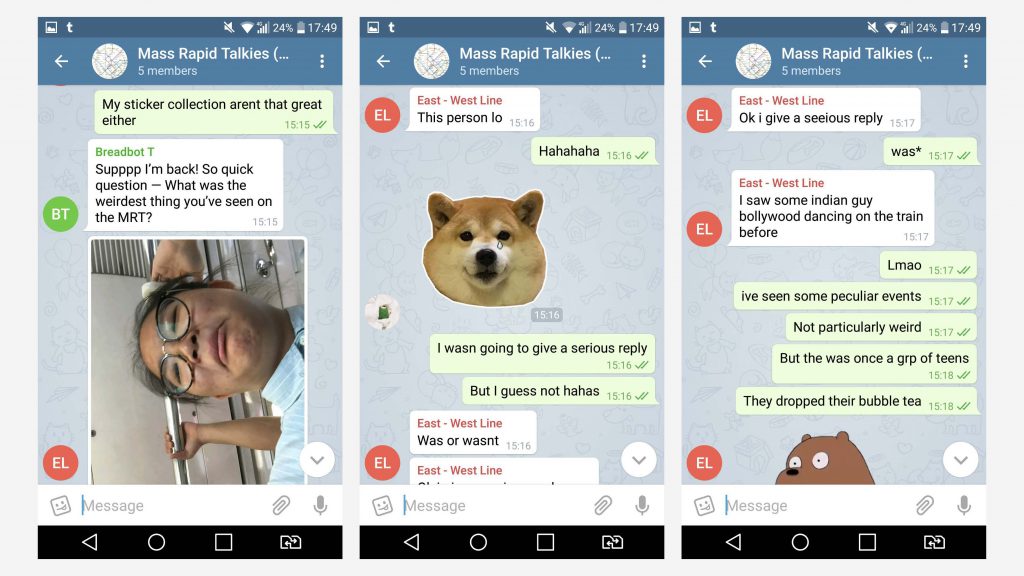 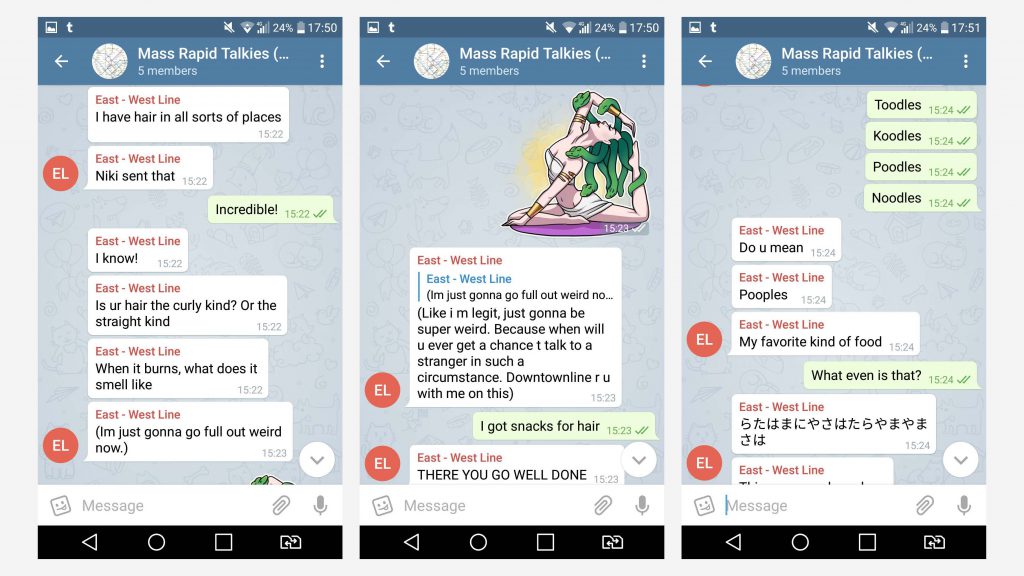 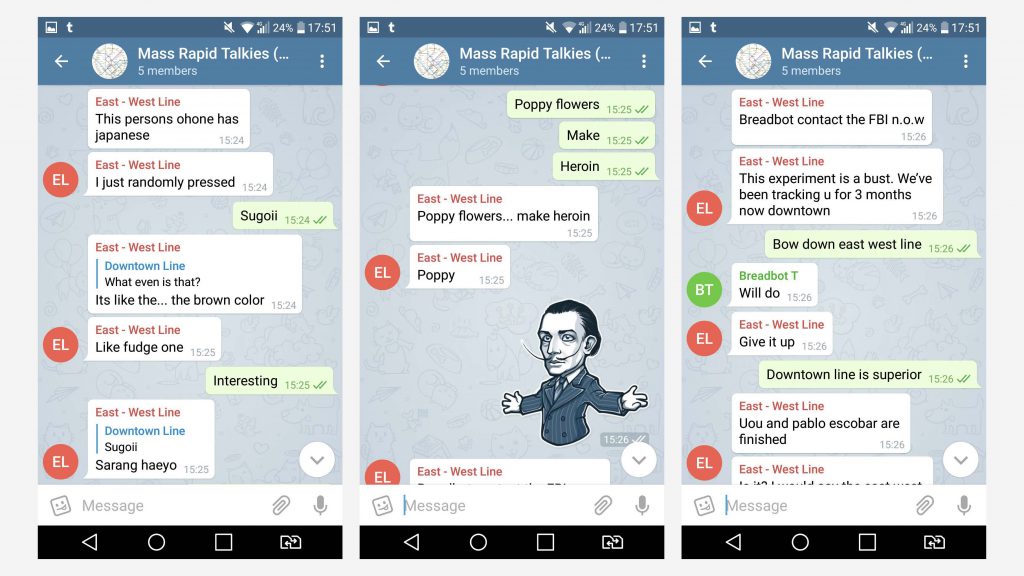 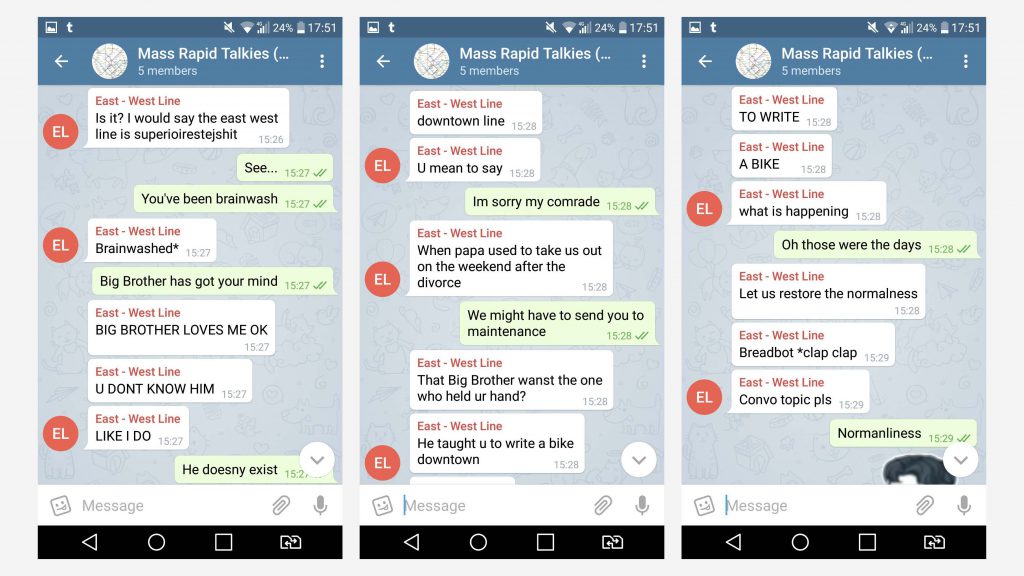 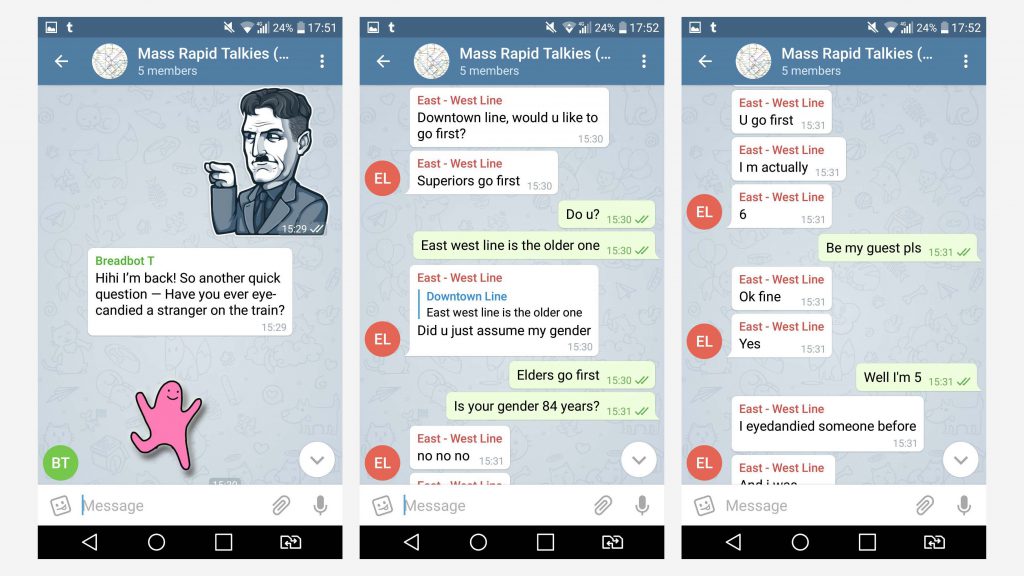 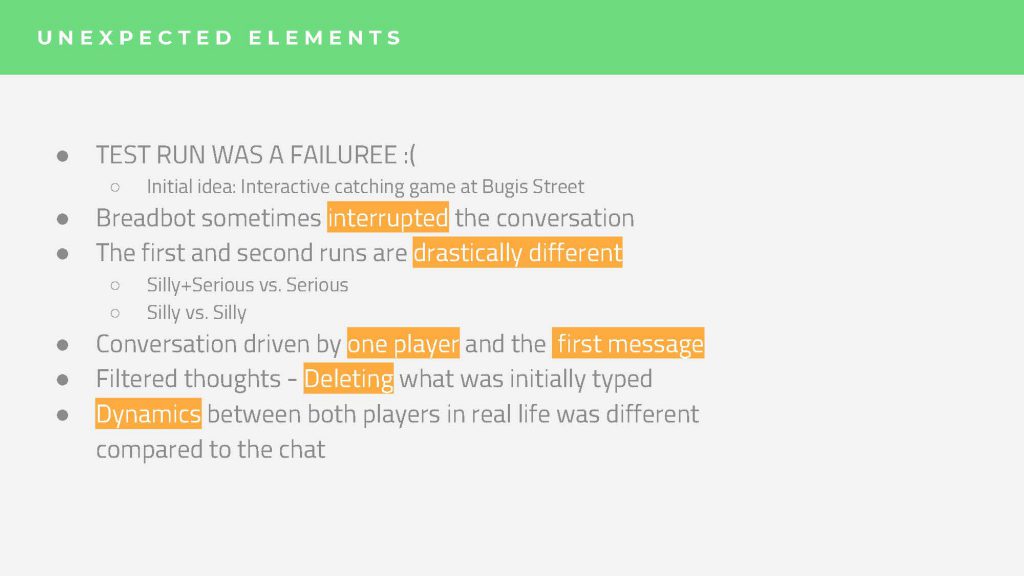 + I think we the facilitators also played a role as glitches. By filming them openly, I feel like we the members were invading this intimate space that was to be shared between 2 people especially when each pair decides to meet up. There are also instances where Ying Hui and I ended up giving unintentional clues out to the players which gives them ideas about who the other person might be, which adds to the impression that they were supposed to form on their own.

+Portraits and the conversations also gave each player a visual expectation of each other, making the physical encounter an unexpected experience. 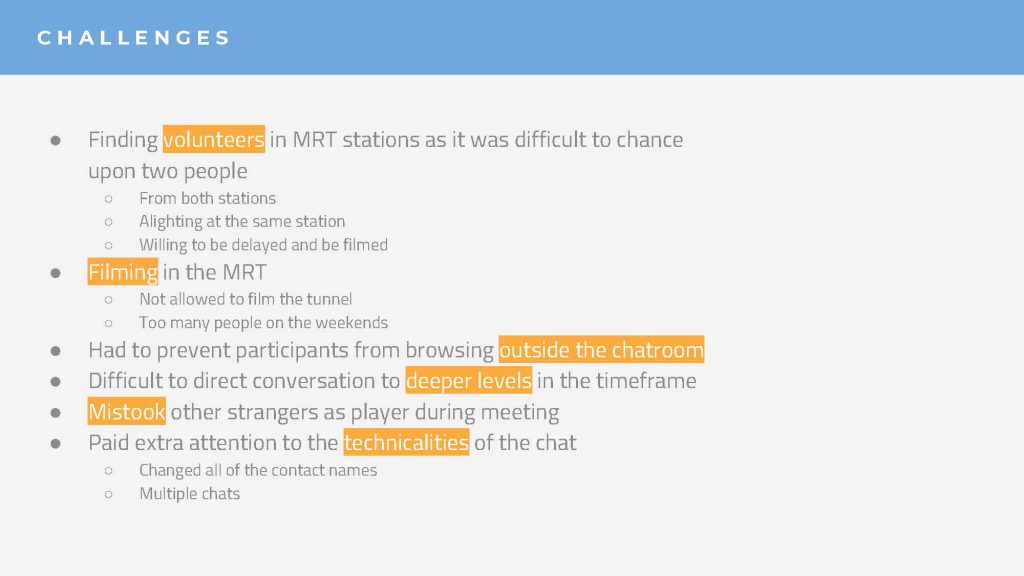 As someone recording for day 1, what I found most interesting of this whole experience was the dynamics between Si Hui and Yi Lin, especially Si Hui disappointment at Yi Lin’s online versus face-to-face encounter.

This reaction is not surprising at all, as we, myself included, take the online personas to be a direct representation of that person which in this case has been filtered through the Telegram app. When we see and interact with the real person face-to-face, it becomes an entirely different experience when the person no longer have the barriers and filters to present himself the way he would have wanted. I sort of understand that Yi Lin must have felt under pressure, suddenly having to meet Si Hui, plus more strangers who were filming every move, no longer under the comforts of Telegram.

But, perhaps because I saw Yi Lin first in person, I didn’t experience the disparity in personality that Si Hui must have felt. I can understand that he was a really nice guy, willing to take his free time off to help out a friend when he knows that he had to go to Bugis and travel back home without any rewards. Plus, he didn’t back out, even after he knew that he had to interact with a stranger, considering his introverted personality. Therefore, I can sort of see where his online personality is coming from, answering Si Hui in a friendly and earnest manner.

I think this actually isn’t just confined to online personas however, as even in our daily interactions, we do have our own set of personas based on who we are interacting with in the end. For one, as much as I would like to be “real” to people, I do know that the way I interact with my family is different from the way I treat my friends. Even in my family, I have different personas accustomed to each member. But even so, I believe that though there may be multiple personas, through each one, there is still inherently a part of me that is within it, no matter how discreet or fake it may be. This probably (or maybe not) counts as an extension from my Super Participation reflection, where even though everything is a self-driven curation, it still stems from a sense of self, no matter how discreet it may be. In that curation, we can perhaps still find the traces of that person if we look hard enough.

I feel that this interactive experience based on the specific feelings of sonder between strangers and the juxtaposition of the lonely self in a crowded and ever-moving MRT, really manages to bring out the relevance of personas, online and offline, in our daily lives.

(I hope this somehow makes sense as I try to put what is going on in my head into words as hard as I can :,) )

And with that, I shall bring an end to my one hell of a train wrecky thoughts.