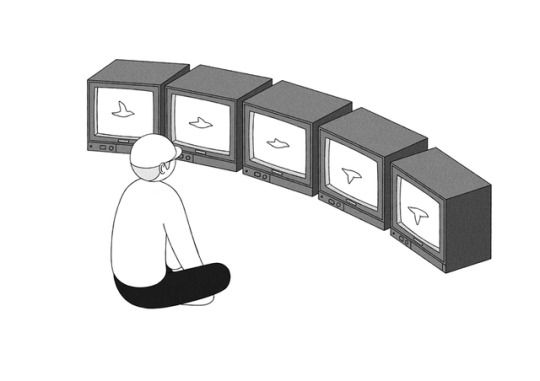 Known for his extensive series of seemingly simple but extremely thought provoking and amusing monochromatic illustrations, woshibai is a full-time freelance cartoonist and illustrator from Shanghai, China and has a large following on social media as well as clients outside of his local reach such as Bloomberg Businessweek, Wissen Magazine, etc…

His monochromatic works often feature clear lineart and several recurring anonymous characters, one of which a capped young boy whose eyes we never see; he represent reality and a base character with nothing but eyes and a mouth; he represents fiction in his narratives.

Besides his works online, he held several exhibitions in China, and also published several books, a full length compilation of his silent comics, “Game” and 2 autobiographical books about his childhood, “Migraine” and “Closet” both in Chinese and English.

Most of his inspiration comes from his walks outside, where he frequently documents his ideas of visuals that attract his attention on a few pieces of A4 papers and a pen that he always brings out with him.

the power of silence

He frequently uses perspective and scale to silently reveal plot twists, often leaving our minds floating powerless at the fact that what we see is strange but at the same time not. There is always a fantastical strangeness in his stories that our rationality would stop to question but the clarity in his concise drawings keeps our imagination grounded, leaving us hopelessly mesmerized. By masterfully playing on this implicit resonance with our inherent yet uneasy fascination with the surreal and escapism, his works evoke a bittersweet dreaminess in rather mundane settings and fully utilizes this dreaminess to explore deeper subjects while being true to his name, by embracing the simple yet powerful flavors of “white”.

What I personally find the most powerful about his work is that his works show power in the silence. It is especially encouraging since in almost everywhere we are rewarded for speaking out, to be expressive and loud to be heard and understood. Yet, his works showed otherwise, that even without loud colours or words in drawings, the silent simplicity in his work can be as powerful as that.