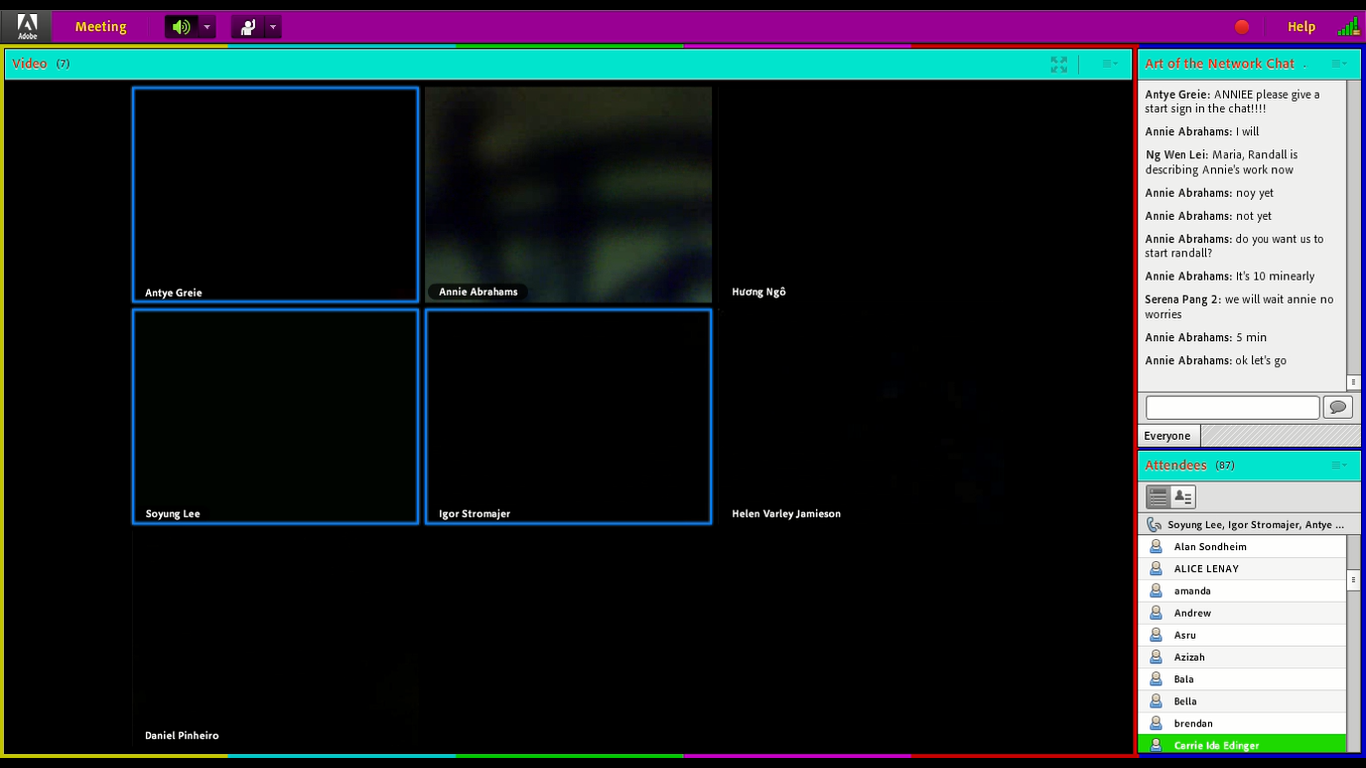 Throughout the 3 days of this online symposium, we delved into the world of social broadcasting through the use of the third space which connects the online spectators to the performers over the world, using web conferences. It showcased a list of presentations and performances which allowed us to engage with many-to-many interactions over the net through a series of real-time web conferences.

I had the opportunity to experience the Day 1 and Day 2 programs live, and in this essay, I will be talking about my personal take on what stood out to me during these 2 sessions.

The real-time online performance by pioneering Internet artist Annie Abrahams and her collaborators around the world was what I found myself to be most intrigued with.

It embraced many of the interactive aspects that Maria Chatzichristodoulou briefed us before which also aligns with what we have been exposing ourselves to throughout this semester.

The internationalism that Maria spoke of is first integrated into the performance, when artists collaborate from their respective geographical locations through the third space created over the net. As a result, an easily accessible platform which imitates the feel of a singular collective space is created.

The performance also implements the DIWO aspects, when the performers are given the space to interpret the set of instructions in their own ways. We see this so, when each artist begins to break away from their initial seemingly synchronized performance to their own individualistic artistic directions. We visually see this through a single screen which is made up of smaller windows which changes from a rather synonymous group of images to a group of contrasting ones. This was accompanies by the transformation of a synonymous voices to overlapping of voices reciting different phrases, with some not even in English. This messy performance ends again with a rather silent synonymous meditation from all the performers.

In the end, we get to experience intimacy through both coordinated actions as well as one created through clashing concoction of personal voices. A final collective artwork is therefore created by embracing all of these individual colours and personalities which is present even when they were doing the same things.

A renewed sense of intimacy is formed, with the glitches and time lags which only adds another layer of togetherness in its own terms, instead of hindering connections, due to the disruptive nature of these elements.

Perhaps the performance suggests that notion of sameness does not necessarily equate to togetherness, as we can create our own unique sense of togetherness through entanglements by embracing our own mess, pushing for an internationalism that is inclusive.

Day 2: My One Demand

We had Matt Adams from Blast Theories who went through a series of their projects to give his insights on weaving in narratives to interactive mediums in order to question the validity of the line drawn between myth making and political reality.

As an avid movie lover, I was particularly interested in the interactive film project My One demand. On the surface, it may seem like a documentary that follows 7 different people with unrequited love across different generations.

However, unlike its conventional predecessors, it was broadcasted real-time in an uninterrupted single shot format to 2 groups of audiences, one in the cinemas and another group online.

In addition, it allowed the participating audience to contribute their personal opinions via questions embedded in the film’s narration via their devices and get back responses from the narration which is reciprocated by the narrator over the film that continues to take place. It therefore allowed the audience to shape the final narrative to a certain extent by inputting their personal voices and experiences on top of the scripted film that is concurrently being played out. 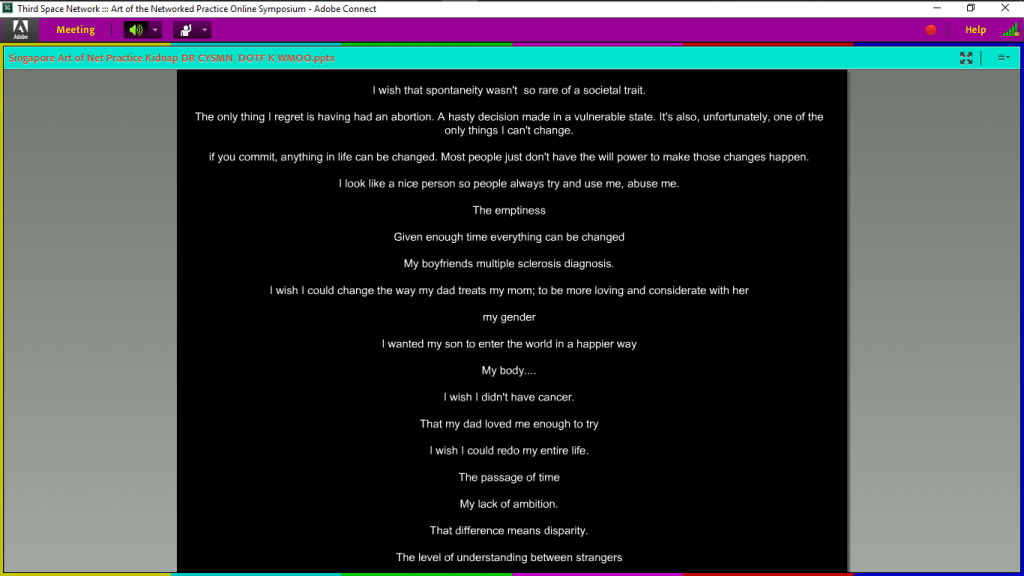 What I like about the project is that although the project was not controversial or revolutionary in definition per se, it did manage to challenge the very core foundation of cinema as a vessel solely for the audience to immerse themselves fully into passivity.

To me, in a sense, the passivity of the viewership in cinema is a reflection of sorts of the passivity we display in our daily lives, when it comes to creating conversations, be it our connections within our personal circles to much bigger spectrums like politics.

By interrupting this immersive experience, a space is created to internalise and respond to what they had been engaging with, without letting the moments die out. It allows for “communal” connections, allowing the audience to connect with the “characters” on a deeper level by giving away their own vulnerabilities as which in turns helps them facilitate them own understanding of themselves when they happen to be in these situations.

In conclusion, these two days have helped me to see the beauty of the unpredictable many to many interactions which encourages us to look out for new opportunities as well as reflect on our current take on what it means to be connected to constantly question and redefine it in our society by using technology as a tool to facilitate it.