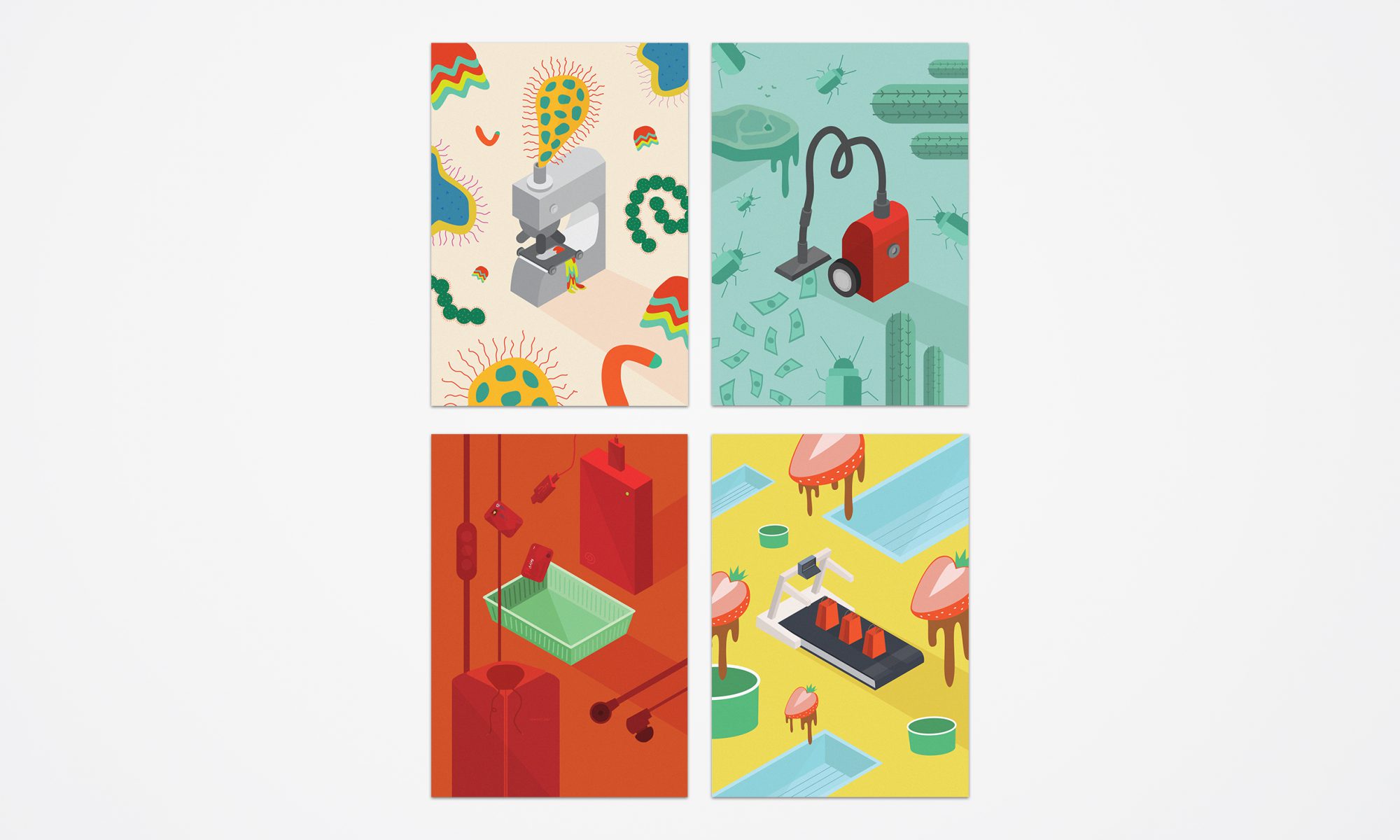 I started out this project with isometric vectors in mind. It was a style I hadn’t explored before and the idea of hiding text within isometrics appealed to me.

I looked at some modern isometric vector graphics from pinterest. Here is one I found that used the shapes of objects to create a block-like letterform.

I also looked at Ryo Takemasa’s vector illustrations of landscapes. I enjoyed the texture and colours he used and how his shapes interacted with each other. He also adds a rough, sandy texture to his vectors to give a muted and stamped effect which I really liked. There is also lot of negative space and the use of visual hierarchy in his illustrations. 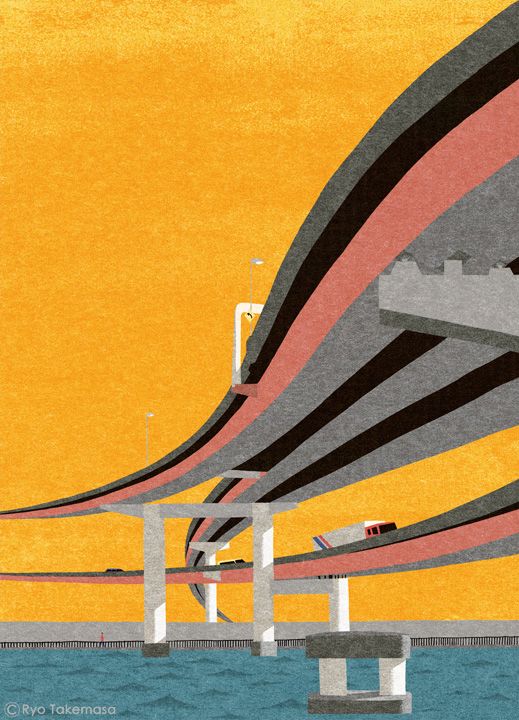 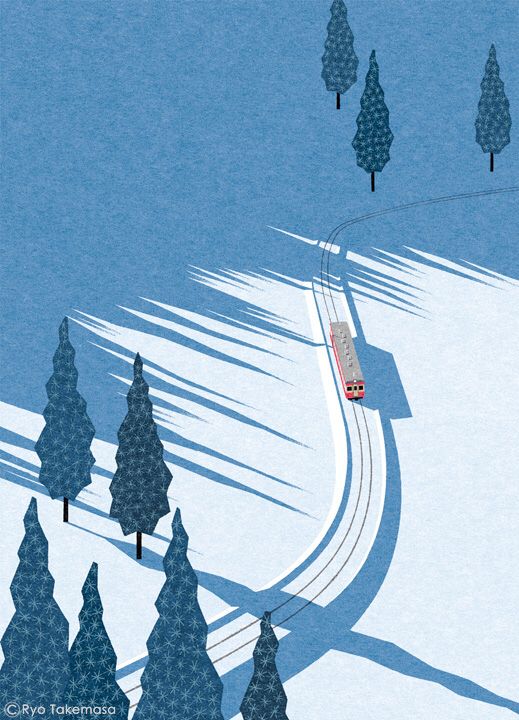 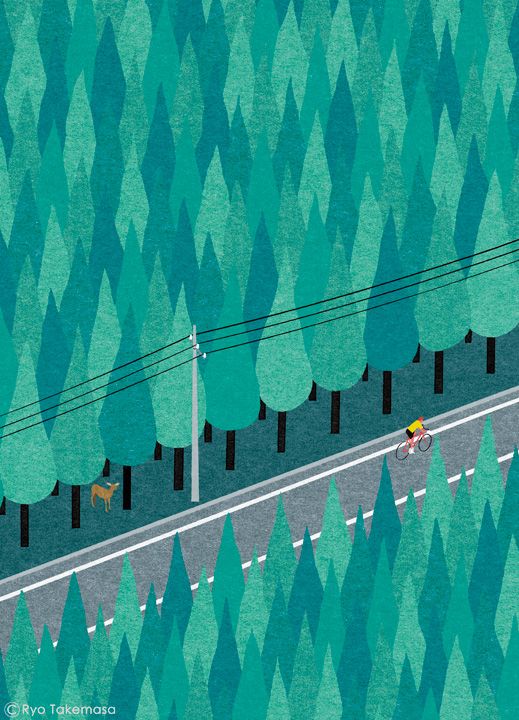 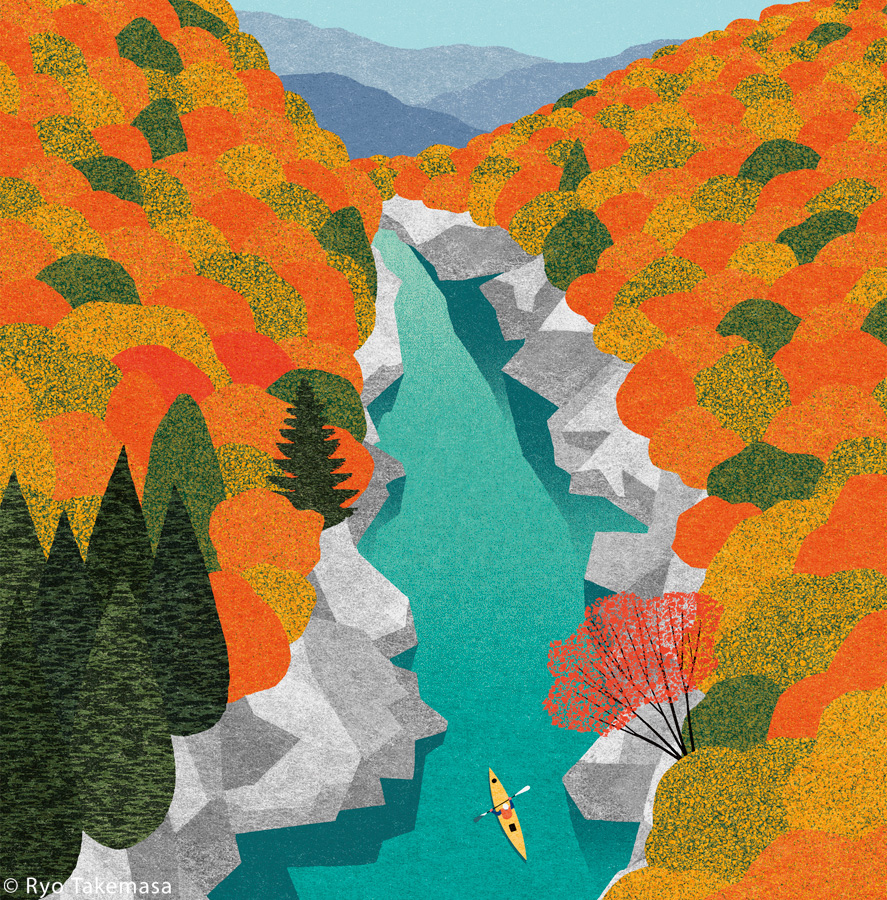 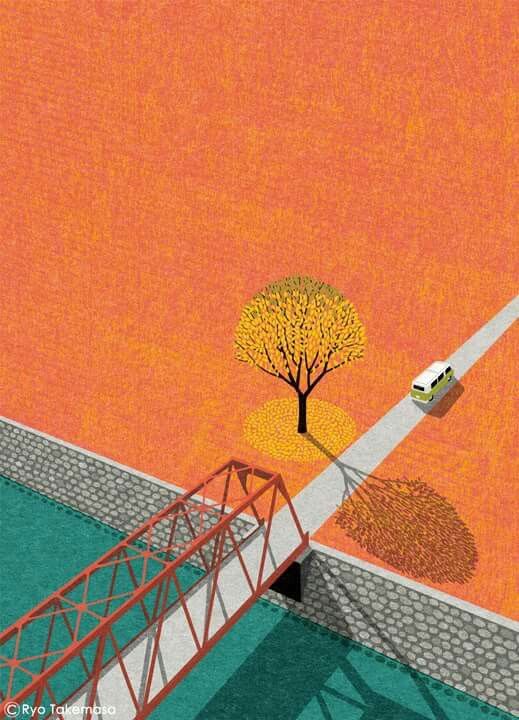 My concept was to choose 4 jobs I would be really bad at and represent them with the objects that the job concerns.

I chose scientist because I suck at science. I think its horribly difficult to remember the terms for internal bodily processes and how everything works. I have the tendency to ask strange and illogical questions too, to the point my father calls me ‘scientist’ ironically.

Following my first artist reference, I did a draft by creating an obvious letter D shaped as a microscope with bacteria like vectors surrounding it but I didn’t like how the letterform dominated the image.

Joy suggested I could incorporate the letterforms more into the bacteria and let it interact with the central object, like how Ryo did his with landscapes. I chose to bacteria to show my letter9forms because of its negative connotations and how the organic shapes of the bacteria can morph to create the letters of my name: MELODIE.

The microscope is the main D, with o in the eyepiece and E in the magnifying lenses. The bacteria seeping out of it is M and all around it are the other letters like e, O and L are repeated in the bacteria around it. This is my process:

I am a loser because I lose things like crazy. I’ve lost quite a few items ever since entering ADM: Freshmen Orientation hoodie, AJAYS-five earpiece, matriculation card, NETS card & hard drive with all my work in it (update: i found it!!).  Being a lost and found receptionist would be the last job I choose because I’d probably lose the found items too.

To illustrate this idea, I decided to incorporate the letter forms in the items that I’ve lost, with an empty lost-and-found tray as the central object. It would act as a letter D in the center, while the other letterforms would be around it in the lost items.

At first, I used a coloured-scheme to represent the objects, but later on, I realised a monochromatic red scheme would emphasise the seriousness of my lost items, especially with striking red. 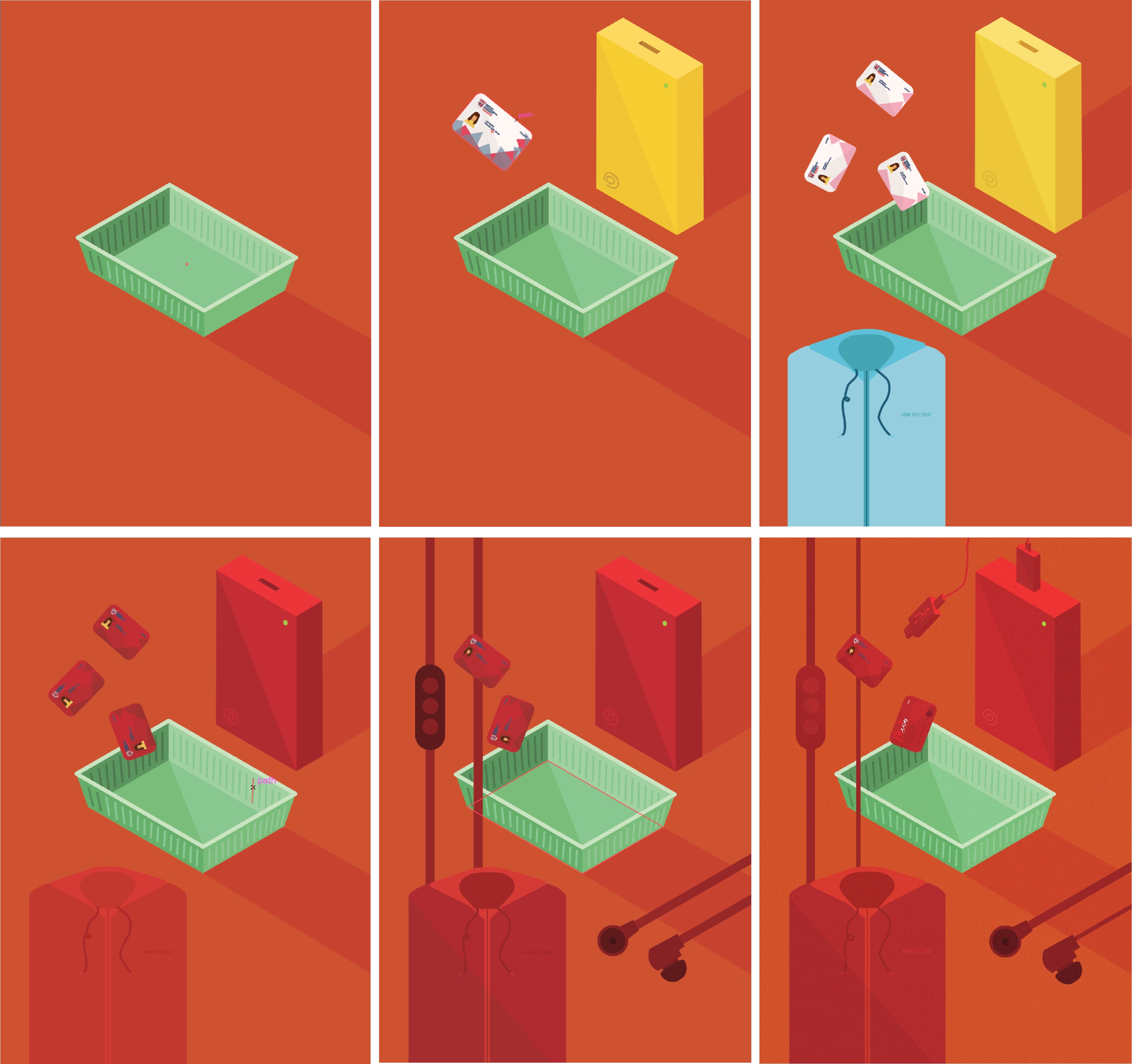 Housewives have a certain set of skills to do their mini jobs like cleaning the house, making sure the chicken isn’t rotten, watering the cactus just right, and not overspending. In my illustration, I represent everything going wrong for this housewife.

I chose blueish green as the background to emulate the dishwashing detergent-like hygienic colour. In the first image you can see the grid I used to keep the coloured object in isometric perspective.

The red vacuum cleaner spells ‘m’ with the curve of its tube and ‘d’ with its wheel and body. The letterforms can be see in the elements surrounding the vacuum: ‘E’ in the drips from the rotting meat and ‘L’ in the flies emerging from it, ‘o’ in the symbol on the dollar symbol.

I have a $157/month membership with Fitness First gyms and it’s practically wasting away. I barely have the time to go and when I do, my gym bud and I will either get distracted by the shopping in the mall or spend more time in their pool and sauna facility. The only machine we use is the treadmill because we don’t do weights. Most of the time, we get frozen yogurt after our gym sessions and put back the calories we burned.

I chose a yellow background with bright colours around to give a summery look because we began our membership in the summer break when we were free. The central object is a treadmill and the letterforms are also in the luxury items surrounding it.

My central object spells a ‘D’ with the belt of the treadmill. The treadmill handles and display also form a letter ‘E’ with its natural structure. On top, the shopping bags imply a letter ‘M’ with 3 bags and the curve of their handles. The strawberry is dripping with the letter ‘E’ and the yogurt tubs spell ‘O’. Lastly, the lines on the swimming pool spell out the letter ‘L’.

Overall, I really enjoyed working with isometric vectors for this project and stepping out of my comfort zone. From Joy and my classmates’ comments (thanks fr all of them), what they enjoyed were the stories behind the illustrations but I could do better in making the letterforms more visible and emphasised.

These are the final outcomes. 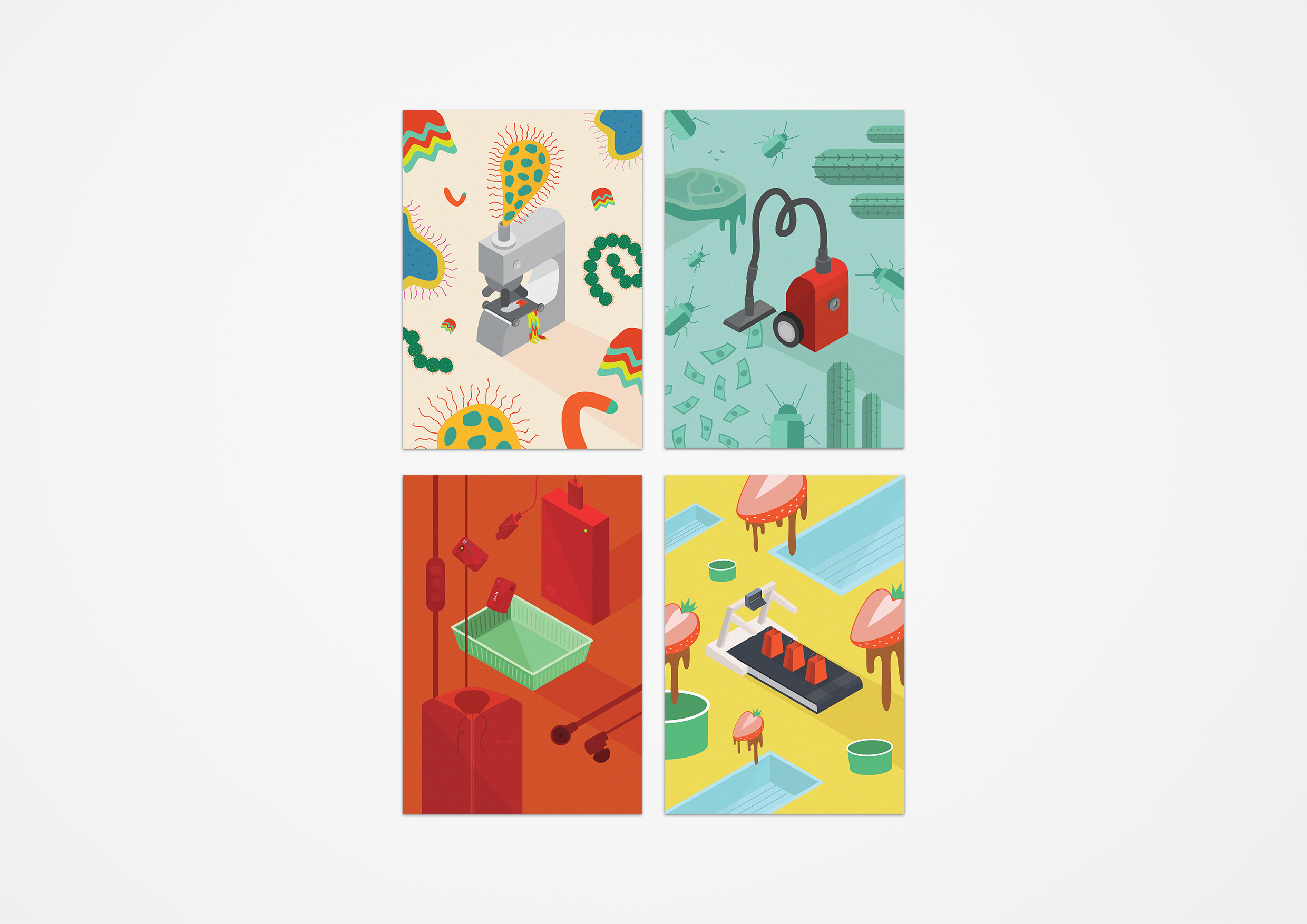