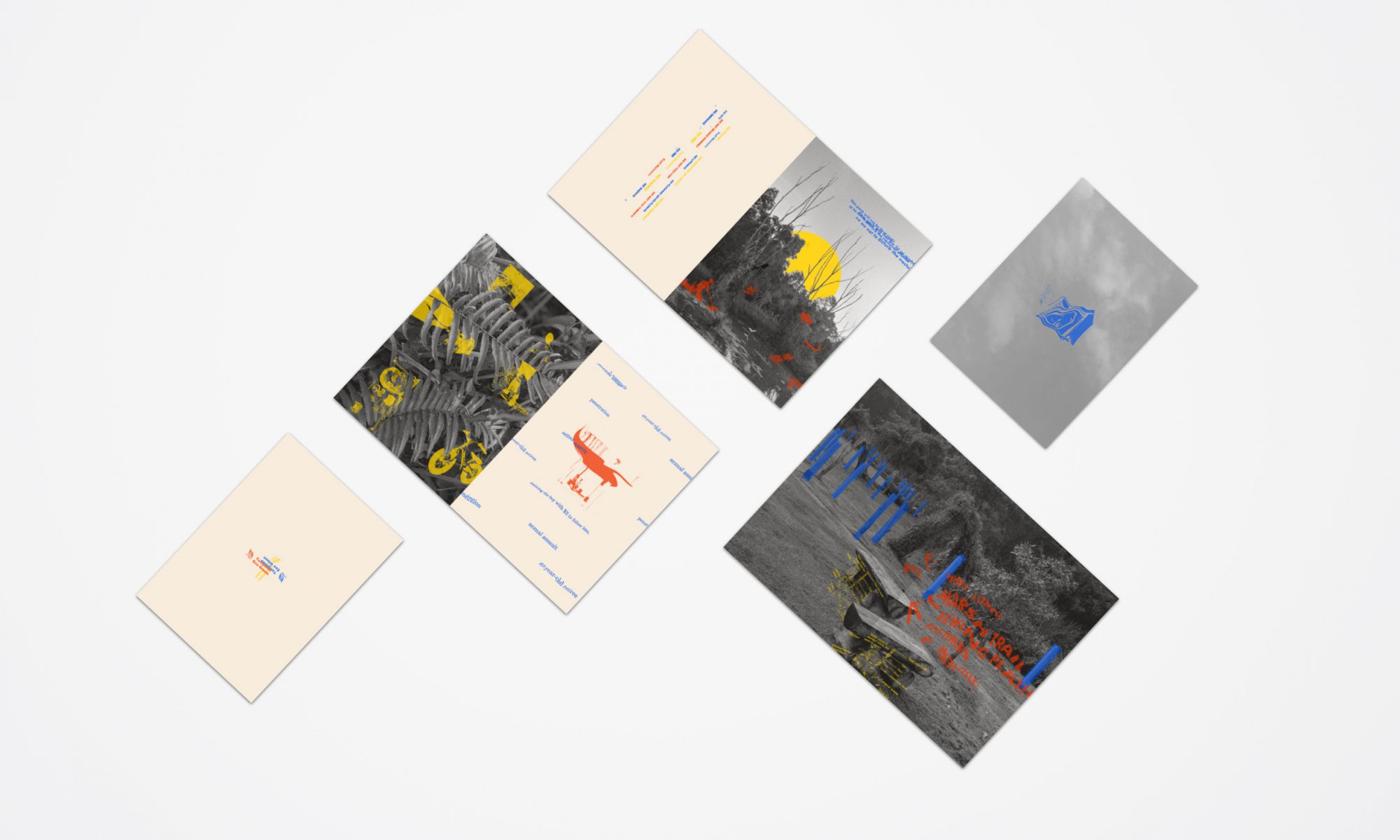 Initially intending to research on Little Guilin, my studies of untouched parks led me to a rare find: Tampines Eco Green, a unique nature spot.

Here is my experience of studying TEG, compiled into one video:

The video is accompanied by the following text:

From the outside, TEG looks like any old forest, nothing like a park. No large signs, no gimmicks, just a pathway in hidden at the end of a canal, with a warning – no smoking.

When you enter, it’s ﬂat grassland, no concrete pathways, shaded by large evergreen trees. Actually, all you see is green, there aren’t bright, colourful ﬂowers, only wild tiny ones.

Then you spot a few unusual seats. They are made solely from tree stumps and parts. So are the signs. The bird hide is made from recycled tree parts too.

Further in, there is an eco toilet with a green roof. The only one in the park, that runs on a waterless disposal system. Combined with wood shavings, waste is broken down into compost underground.

At night, it’s pitch dark because there are no street lamps. It’s no wonder the park is unknown. A survey I did with a sample size of 200 locals concluded that only 1 in 6 Singaporeans know of the park’s existence.

According to my ﬁrst hand observation and secondary research, these are the archetypes of people who visit the park: 38% of the visitors are birdwatchers. 35% are red faced, ex army men jogging through, trying to keep in shape. 19% of them are neighbourhood retirees who ﬁnally have the time but not the energy to stroll. 4% are kids whizzing through on oBikes and 3% are exploreSG Instagram photographers. So we’re left with 1%. That’s for the old man I read about in the news who offered a secondary school boy $2 to follow him into the park so he could do dirty things to him.

On a weekday, I spotted a lone bird watcher at the viewing platform. He had a tiny point and shoot camera and he was staring at a tree. He turned and told me, “I’ve been sitting here for hours waiting for the Black Bazaar, and you scared it away. Young people don’t notice these things because they aren’t looking.”

And that’s what’s so special about Tampines Eco Green. Nature is hidden all around the park. You only see it if you are patient enough to look.

I created an infographic to illustrate my research as well:

My infographic and video is an attempt to recreate the experience of visiting Tampines eco green. I chose an earthy greenish colour for the background to look like eco friendly recycled paper and a striking blue for the sketchy graphics to stand out from the dull background. The blue also represents the hidden gems in the park and what I discovered from visiting it. I chose to use sketchy drawings so it would look like a journal of somebody scribbling down their little observations. The outcome is something quite raw, just like the outlook of the park. I used sound effects to recreate the sounds I heard, like the rustling of the bushes and the ﬂap of birds wings even though I couldn’t really see where the sound was coming from.

All in all, it was a really fun exploring this side of Singapore and learning what it had to offer, even if it were the little things that made it unique.

For my zine, I intended it to be a personal experience of the place through primary and secondary research.

I wanted to have a slightly sinister and ironic feel to my zine to show the dark side of Tampines Eco Green.

Here are some pictures I took that were used in my zine: 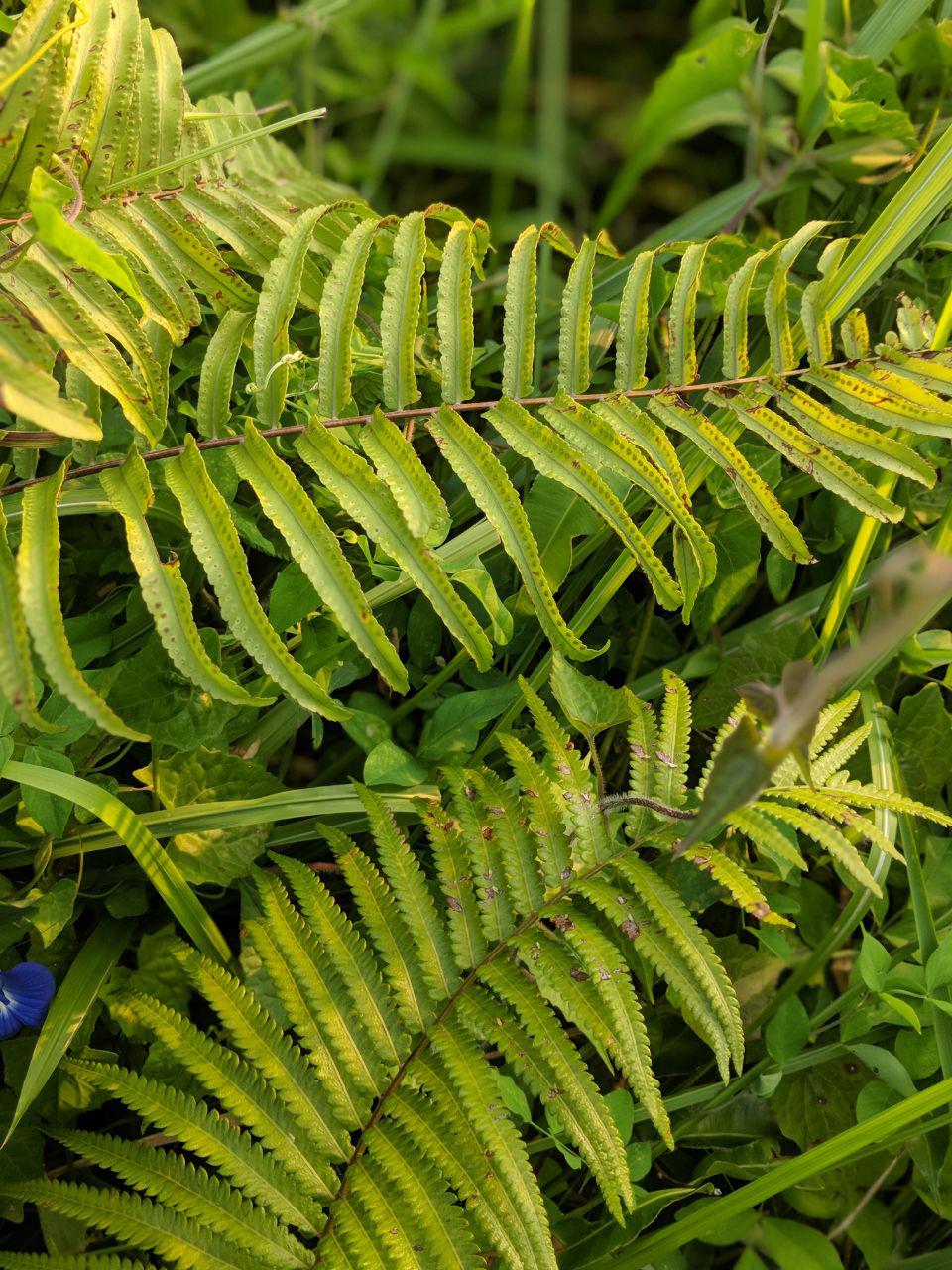 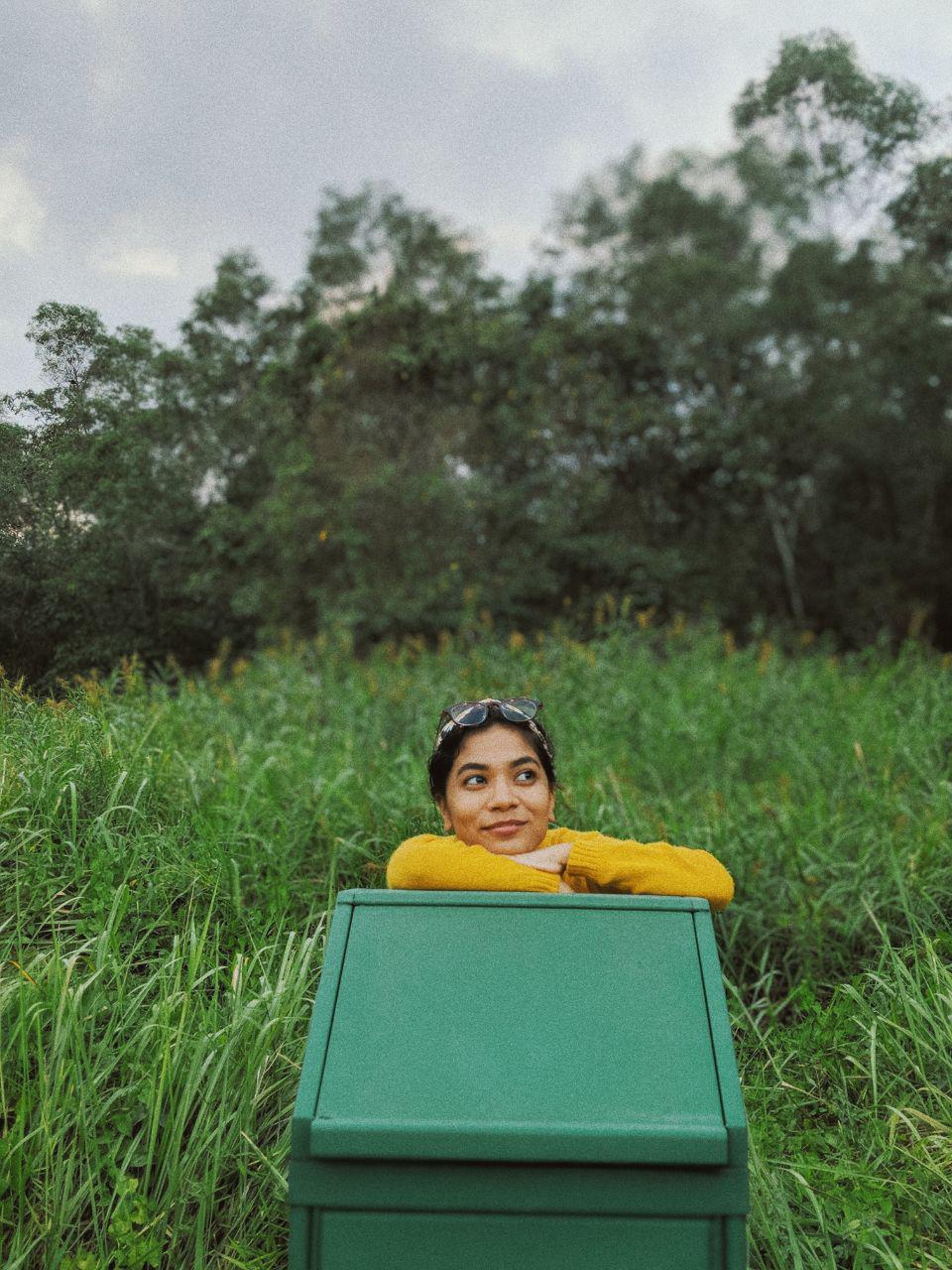 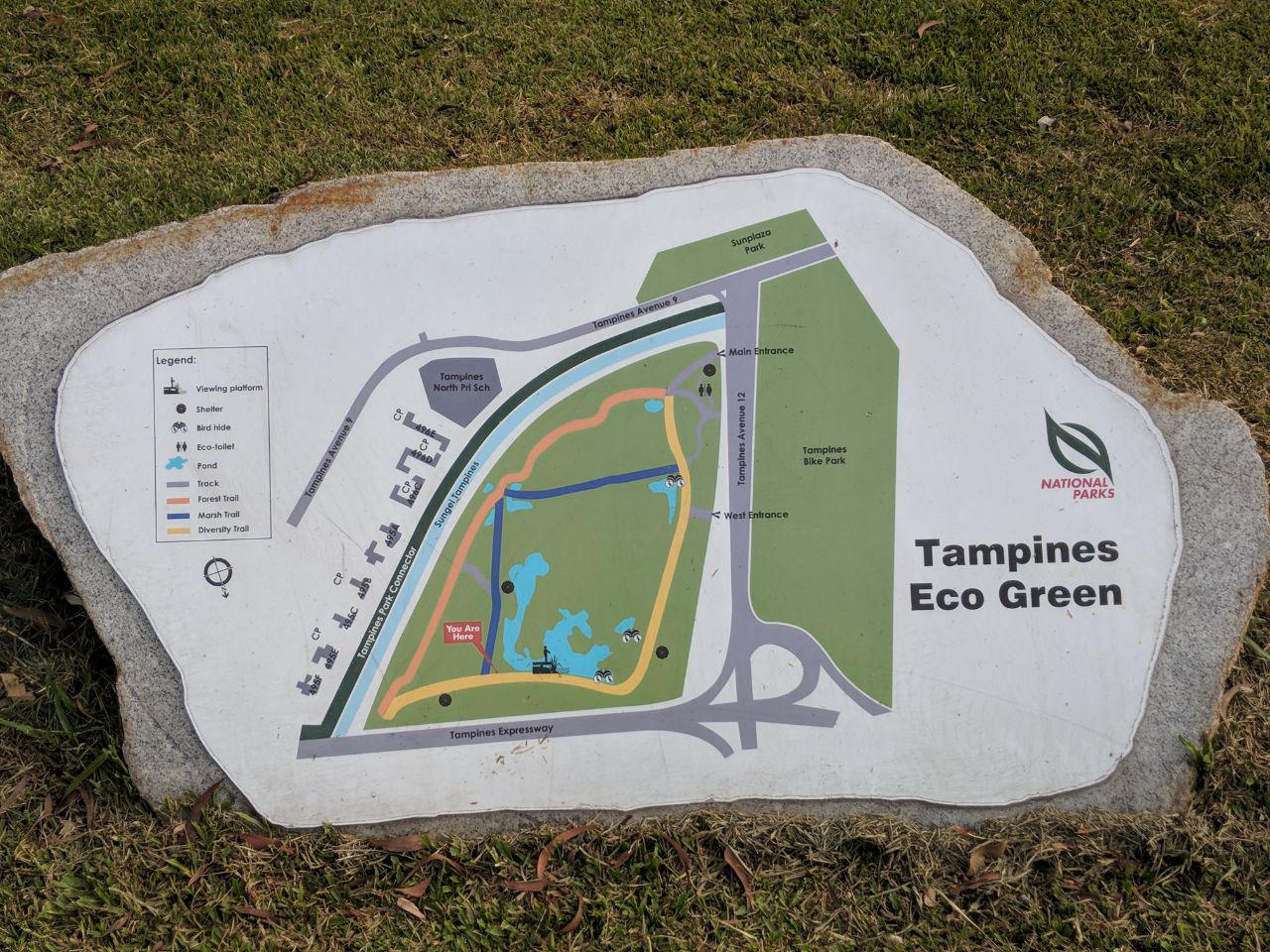 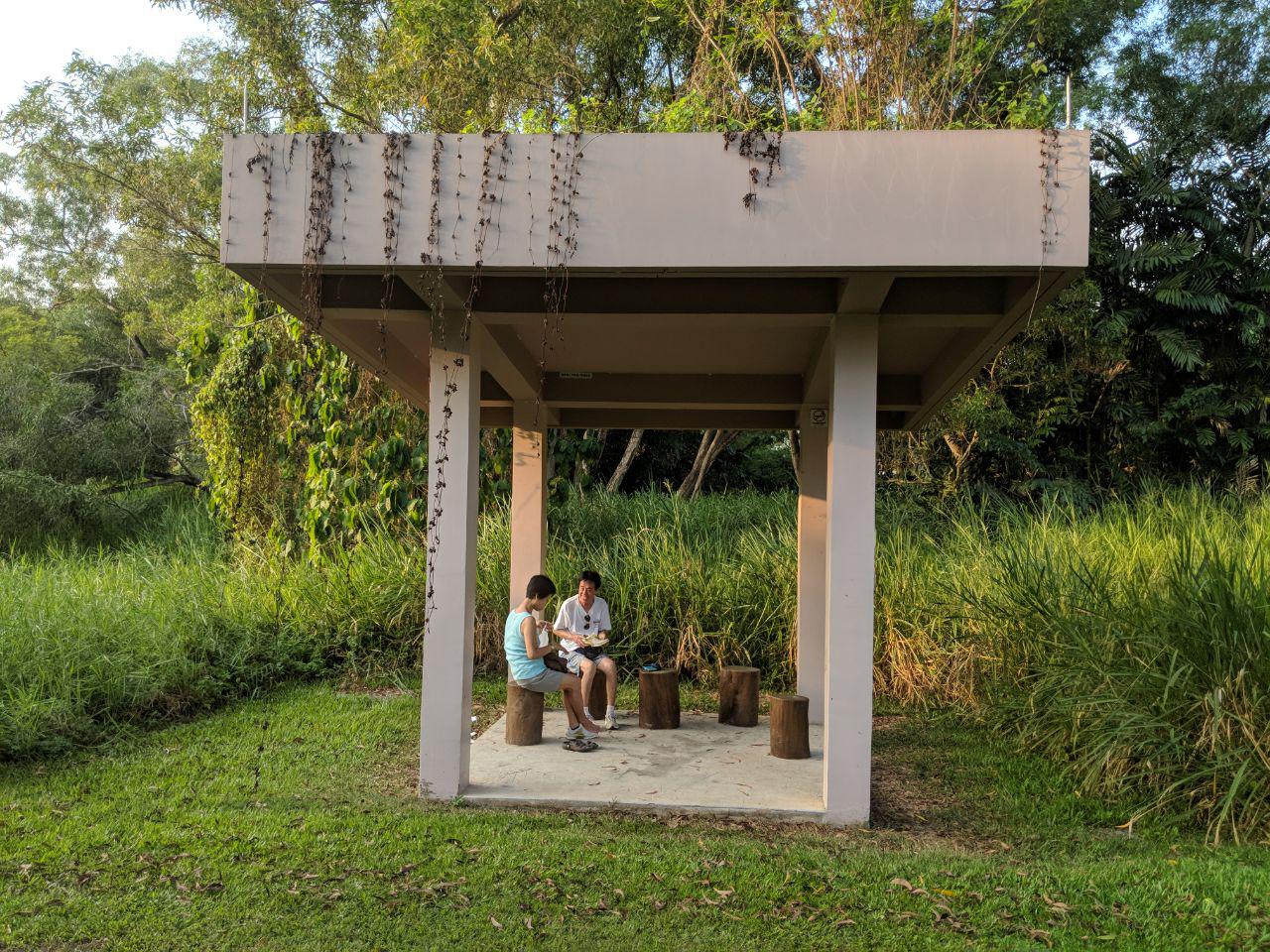 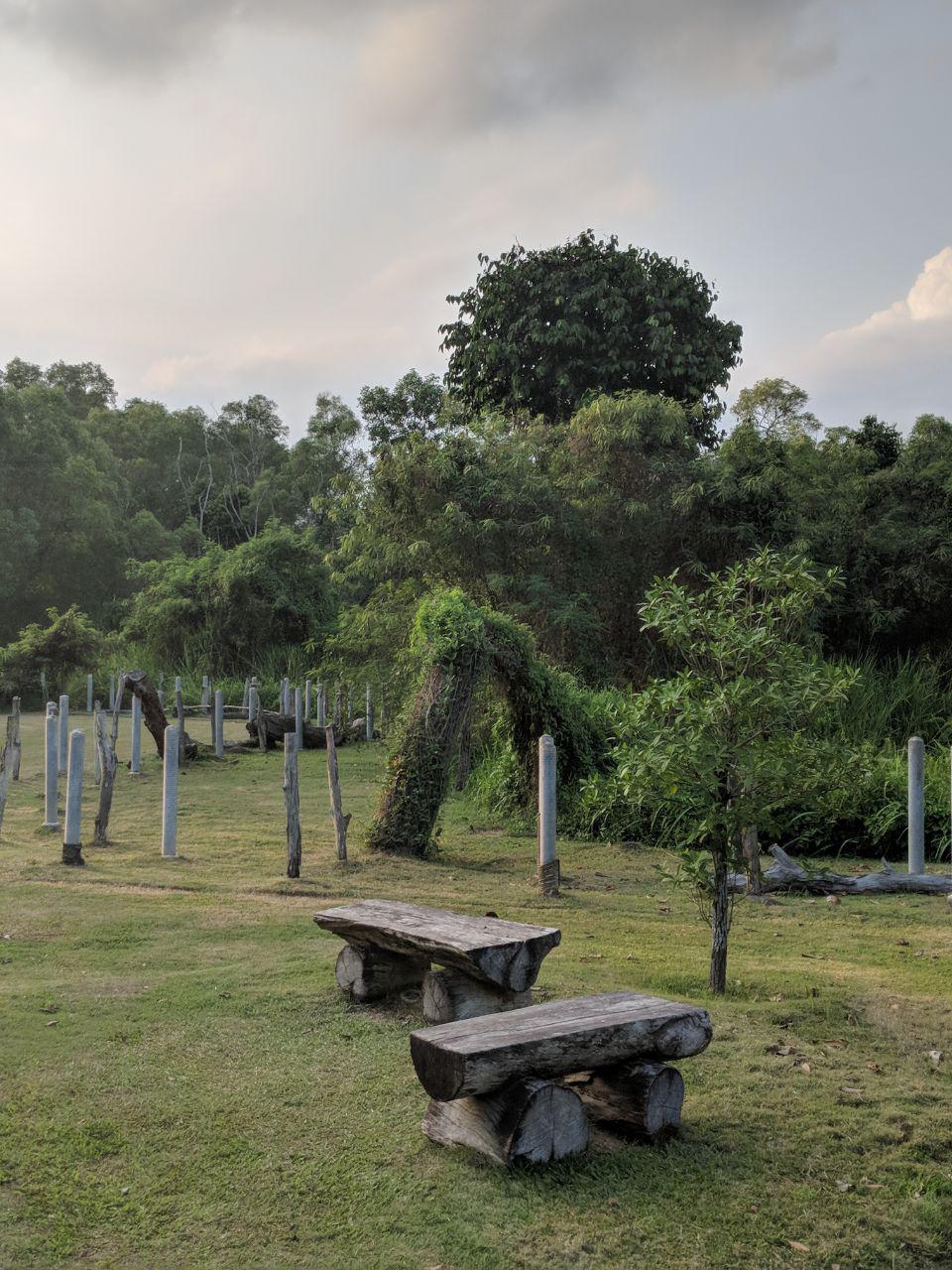 First Draft: Extracting and thresholding images from the park

I used red, blue and yellow as primary colours on a cream background. Three colours represents three different sides to the park I wanted to show. 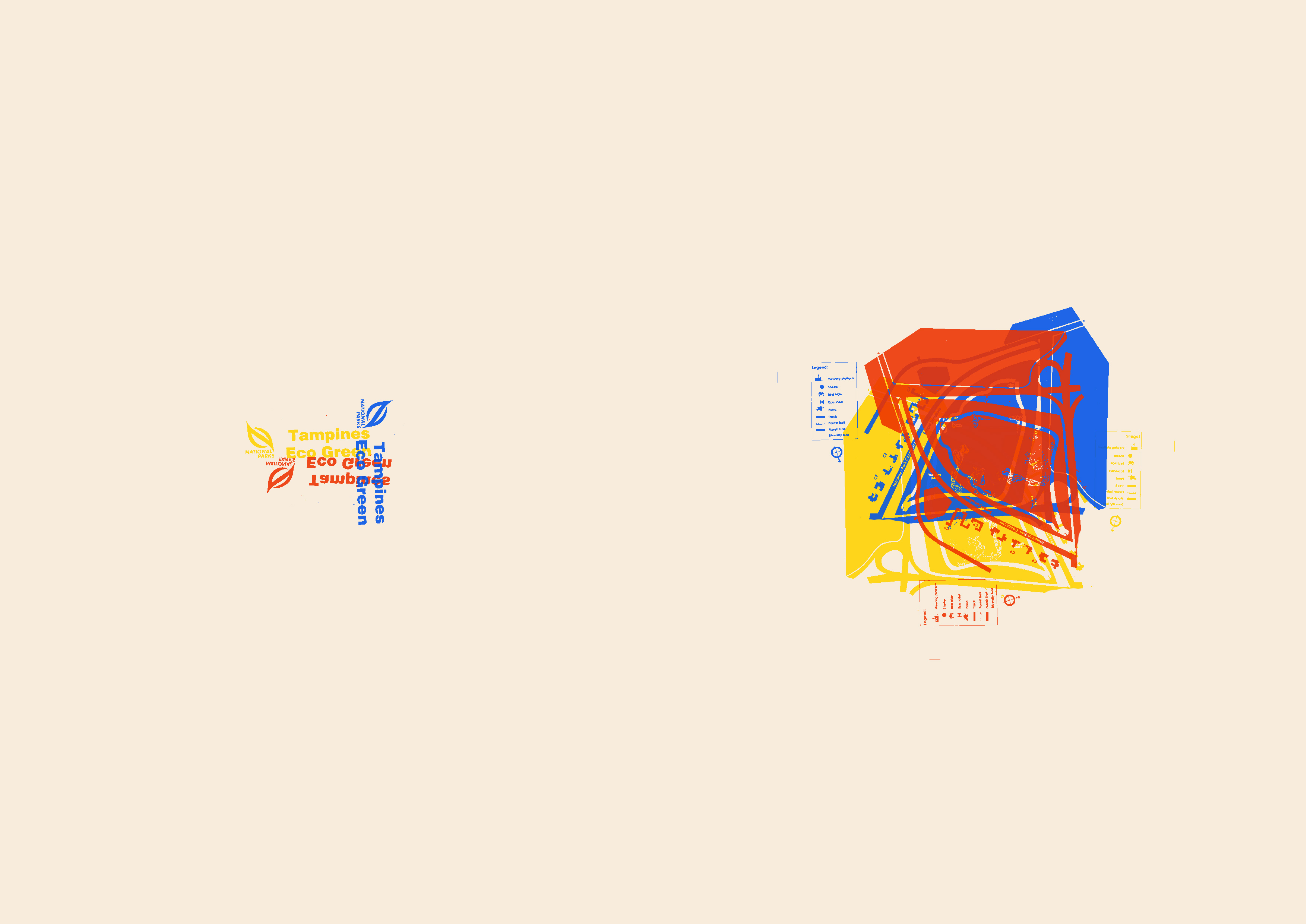 Front & back: I turned both the map and the logo of TEG in three directions to use for my front and back cover.

Feedback: Front is too messy, can’t make out what it is. 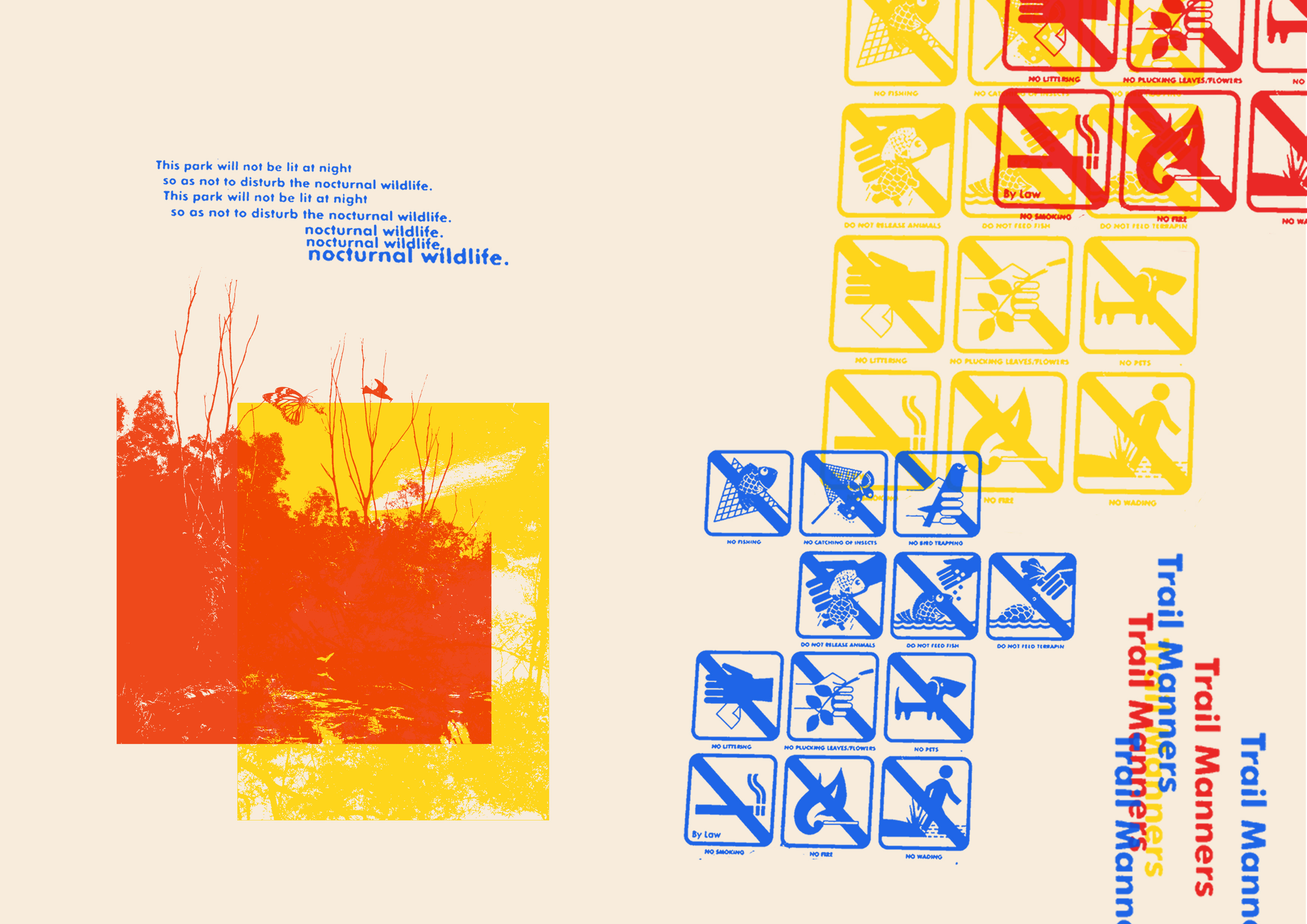 Feedback: Signs too much like a pattern, try integrating into the forest. 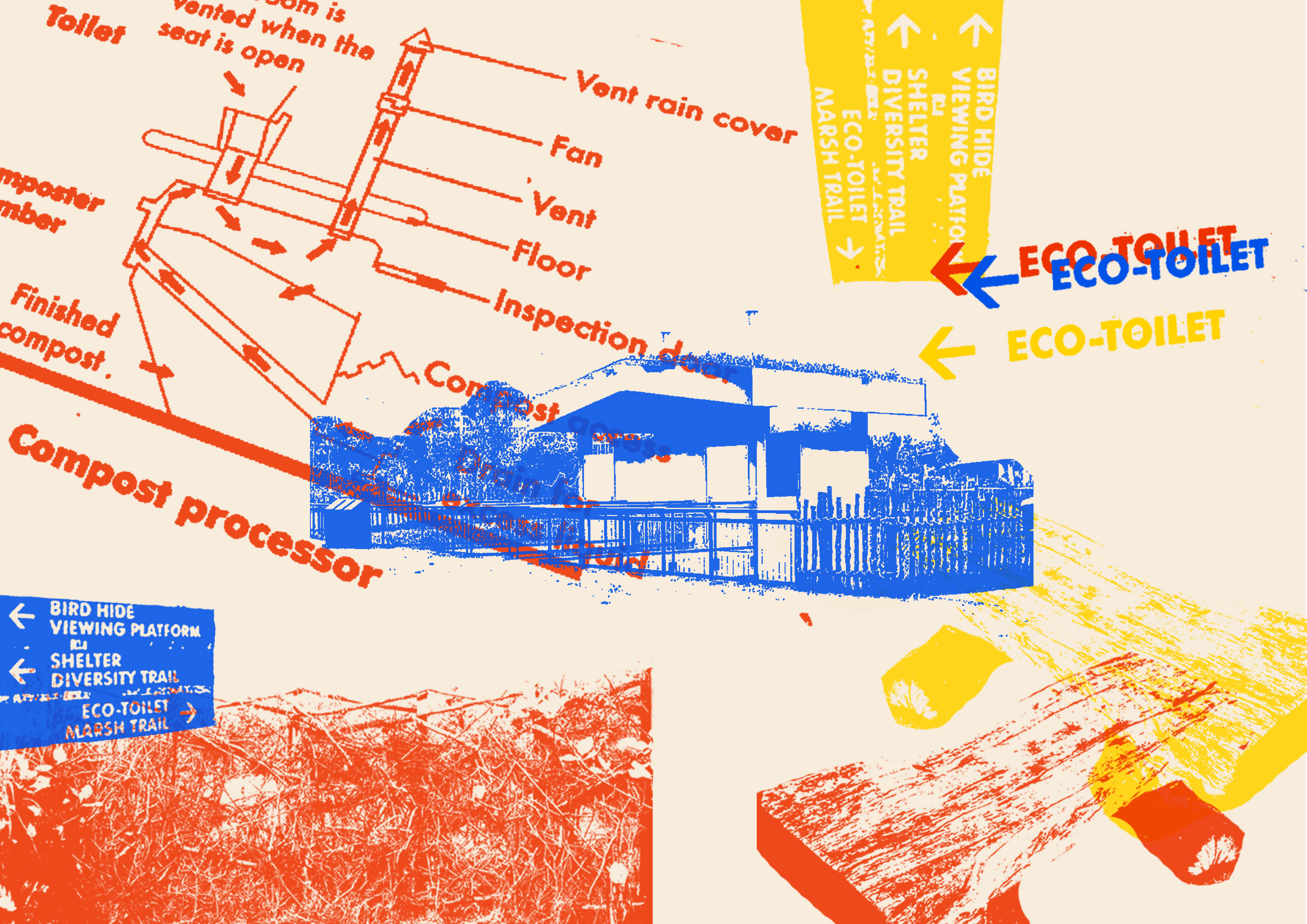 Page 4-5: Abstraction of toilet signs and eco aspects of the park such as toilet, bird hide and chairs. (Location where paedophile molested boy)

Feedback: Arrows from from diagram are distracting because of directions, and too much text, extract more. 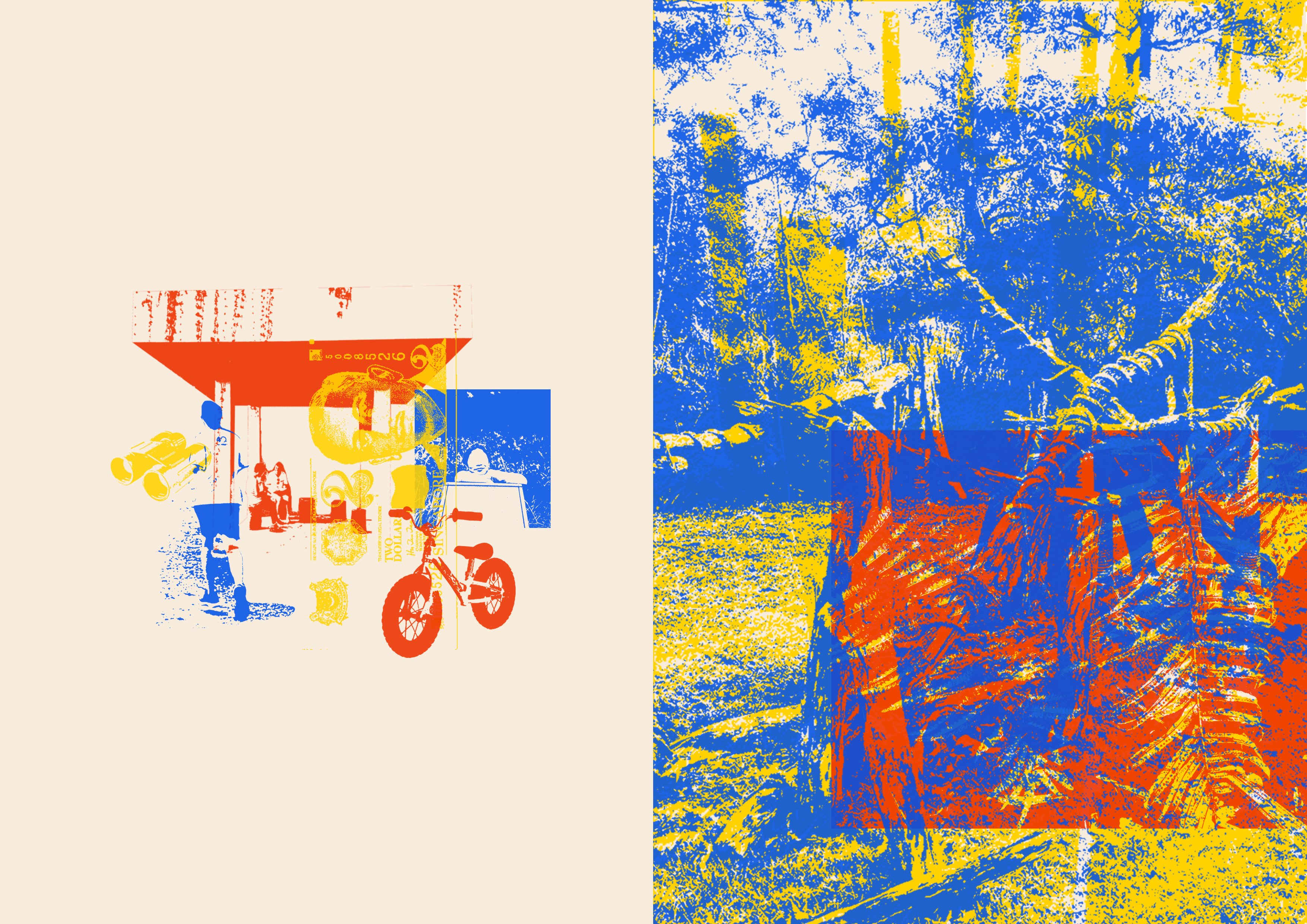 Page 6-7: People visiting the park and what they do there, impact of man on nature.

Feedback: Too much space on left, too little on right, right too cluttered.

After revisions, this is what I came up with:

Left: Image of looming sky of TEG to foreshadow a dark theme. The blue map of the park is also warped.

Right: End page of TEG signs inside out in three colours to show three aspects of the park that we explore in the zine

Left: Multicoloured warning signages of don’ts: ‘No smoking’, ‘No feeding animals’ etc. on linear path emulating the path in park

Right: B&W image of park and blue words to inform public of the park not being lit at night. Filled in yellow sunset to signal night approaching. Extraction of signages in red acting as people performing rebellious acts in the pond, doing everything the signs said they shouldn’t.

Full page spread: Eco benches, red text and arrows directing the eye to eco-toilet. System drawing of yellow toilet represented through the bench. Man made structures are blue to signal man’s stark impact on the park. Leads in to story on next page.

Left: B&W photo of leaves with extracted elements of visitors in yellow hidden in the leaves to represent the sparsity of visitors: $2 note represents paedophile who molested boy, bicycle for the kids that ride through, thresholded bird watcher I interviewed, jogger and Instagram girl.

Right: Constructed shelter in red with elderly under, separate from the raw untouched nature on the left, blue words of the sexual assault ringing around them like a stain, tainting the park.