Memory Foam explores the interstices of pain and memory through the simple interaction of human and mattress.

To understand this project, we must first explain the technology behind the inspiration for the installation, that is, memory foam mattresses.

Mattresses made from memory foam consist mainly of a material called polyurethane, making  it more viscous and dense compared to ordinary foam mattresses. Memory foam bubbles or cells in the material are open, creating a matrix through which air can pass through its interstices, making way for a body to be embedded into the mattress surface. The higher the density of the foam, the quicker it softens in reaction to heat (e.g from a person), capturing and creating a mould to the warm body within a small period of time. When the body releases, so does the foam, and is recovered to its original shape. For the few short seconds after the pressure is released, it forms an imprint that fades out. Here is a visual to illustrate that effect.

This phenomenon is interesting to us because, just as quickly as the foam remembers the shape of the hand, just as quickly, it forgets it. In the same vein of thought, we experience pain in small or great amounts, and our brains are built to forget it quickly as a coping mechanism for survival. But do we really forget? When pressure is released from the mattress, its shape returns to normal. But, seemingly unmarred on the surface, the wooden frame underneath collapses to accommodate the pressure. The greater the pressure, the greater the collapse.

We aim to manifest this sense of unseen collapse through a light and sound installation.  Entering the space, the participant will observe a single bed frame with mattress mounted to one side of the wall and 32 filament lightbulbs on the other. If the participant chooses to touch the mattress, the lightbulbs will light up in response to the amount of surface area and pressure applied. In addition to this, certain parts of the mattress will activate a simple ambient soundtrack that will change the longer the pressure is applied / photosensor is activated (we have yet to decide on the best solution for this). The set up is illustrated below: 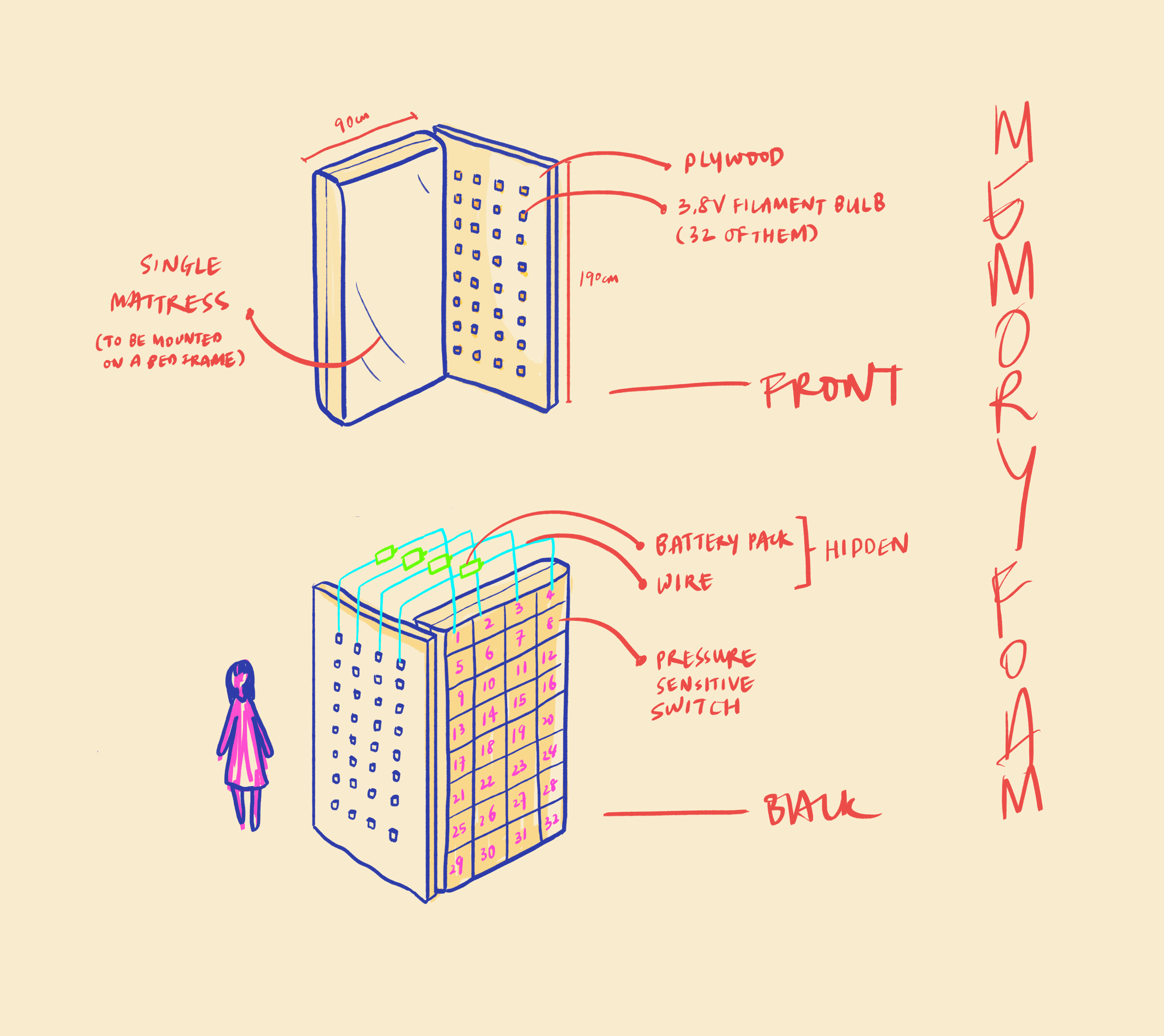 Output / Filament bulbs lighting up and / or ambient soundtrack playing 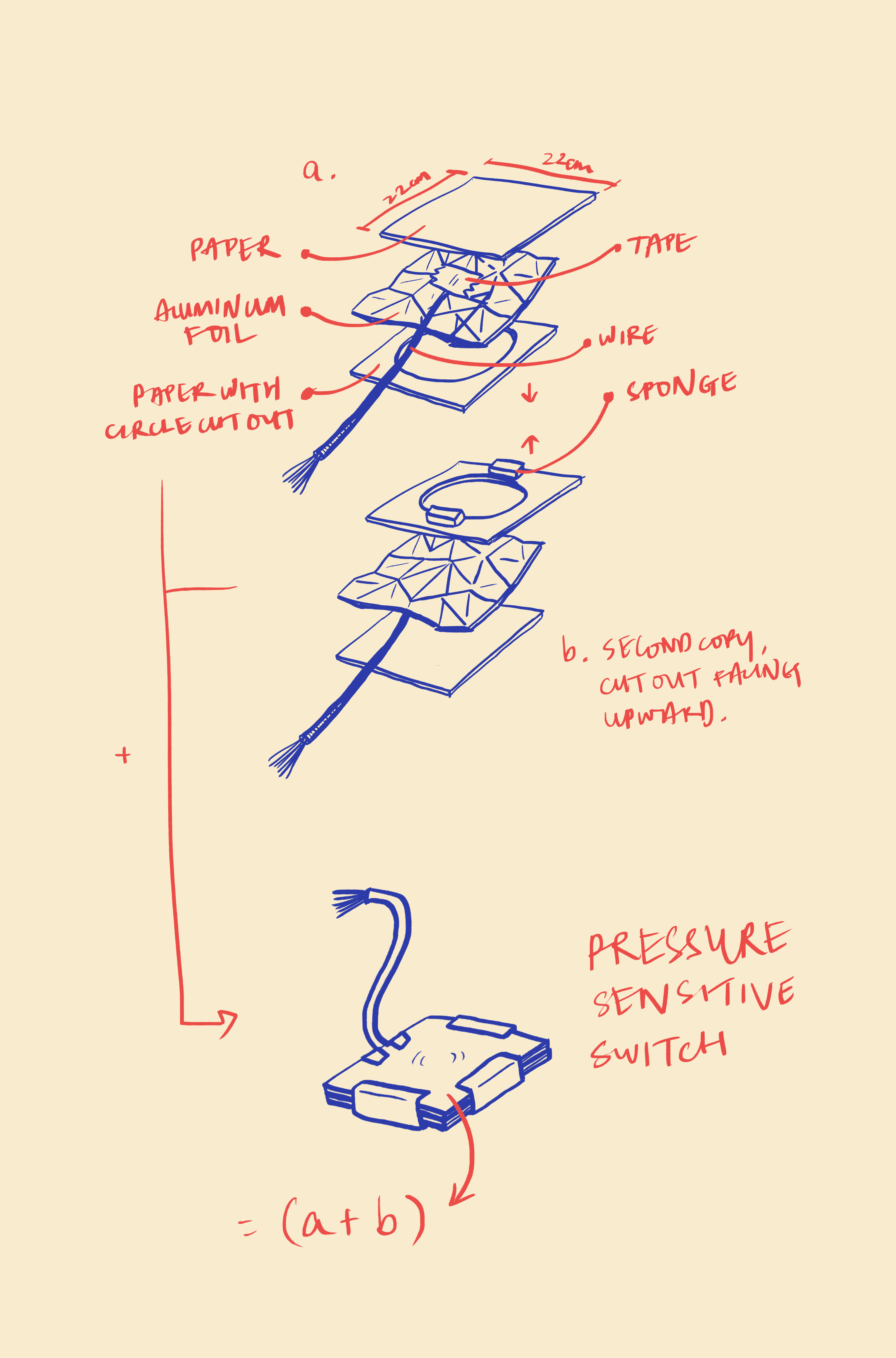 It is intended for a single person to engage with the piece at one time but will work with multiple participants concurrently.

Some of our work in progress and tests: 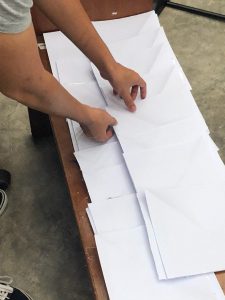 Since there are no explicit instructions for the participants other than that they are encouraged to touch it, the installation is intuitive and left for the audience to discover. The outcome of the lightbulbs reactions and soundscape will differ based on the amount of pressure exerted on the mattress and surface area covered. The greater the force of the participants weight onto the mattress, the longer the bulbs will be lit. We also decided to add a capacitor to each circuit so the lightbulbs linger on slightly longer before they fade out. The wider the surface area of the participant in contact with the mattress, the greater the number of bulbs lit. The soundscape will change with the amount of pressure exerted.

Memory Foam falls in between a passive and interactive installation. The audience can control which of the 32 lightbulbs and sounds are activated, but they are not in control of the type of light or sound that appears. The feedback in this installation is moderate to high as the light and sounds are immediate responses only when activated by the participant. However, there are limited responses to the lights and sound, and they differ only in position.

In our project, the user is valued and is responsible for all events as they are the only ones that can activate the light and sounds on the other side of the wall through their interactions with the mattress. This is due to the fact that each space on the mattress activates a different light bulb or sound. The user will be valued no matter how many participants there are at a certain time as each of their interactions trigger a different bulb each time. There is a parallel simulation of their interaction with the light and sound responses in the same positions on the bed, as well as an intuitive selection and result relationship. For the structure of the interface, feedback is provided about the location of each activator and what remains to be interacted with, with an open structure where the audience can play with the different switches through the bed.