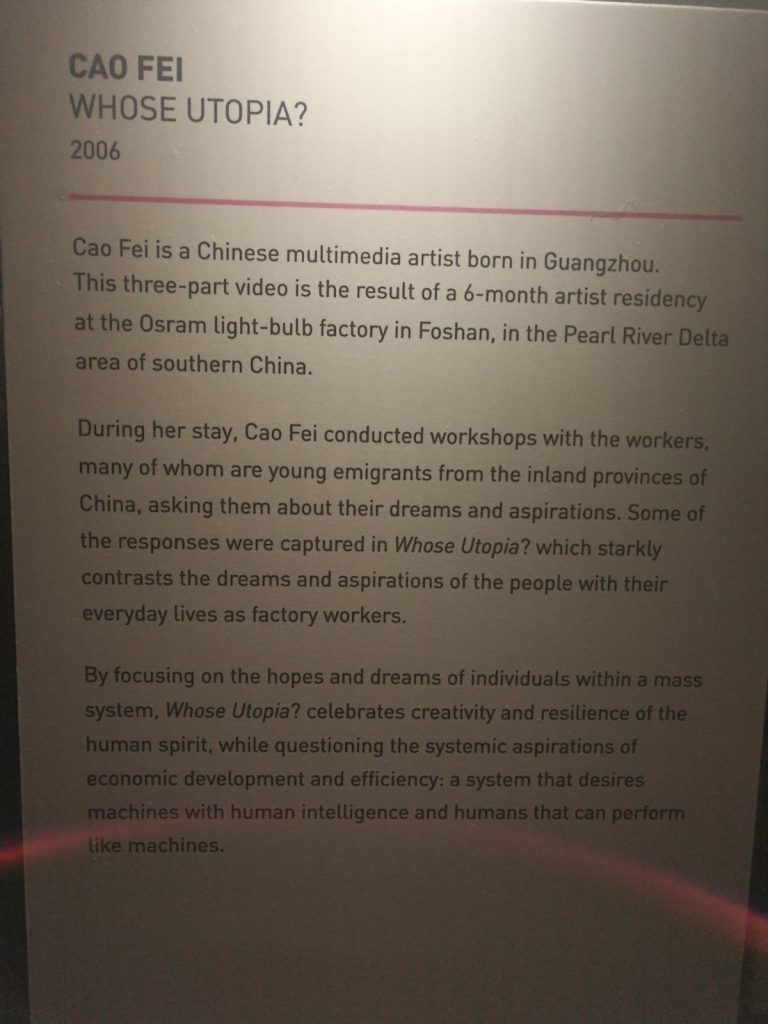 Recalling the experience in Art Science Museum, I spent the most amount of time viewing Cao Fei’s Whose Utopia(around 20 mins). I feel that it is piece filled with bittersweet and irony of what the future may become for most of the low or middle class population around the world. This exhibit is in a video format and it captures the manufacturing processes that is occurring in a huge lightbulb factory.(which we can associate with many other factories that manufactures interactive devices, i.e IPhone, laptops and other consumer electronics) 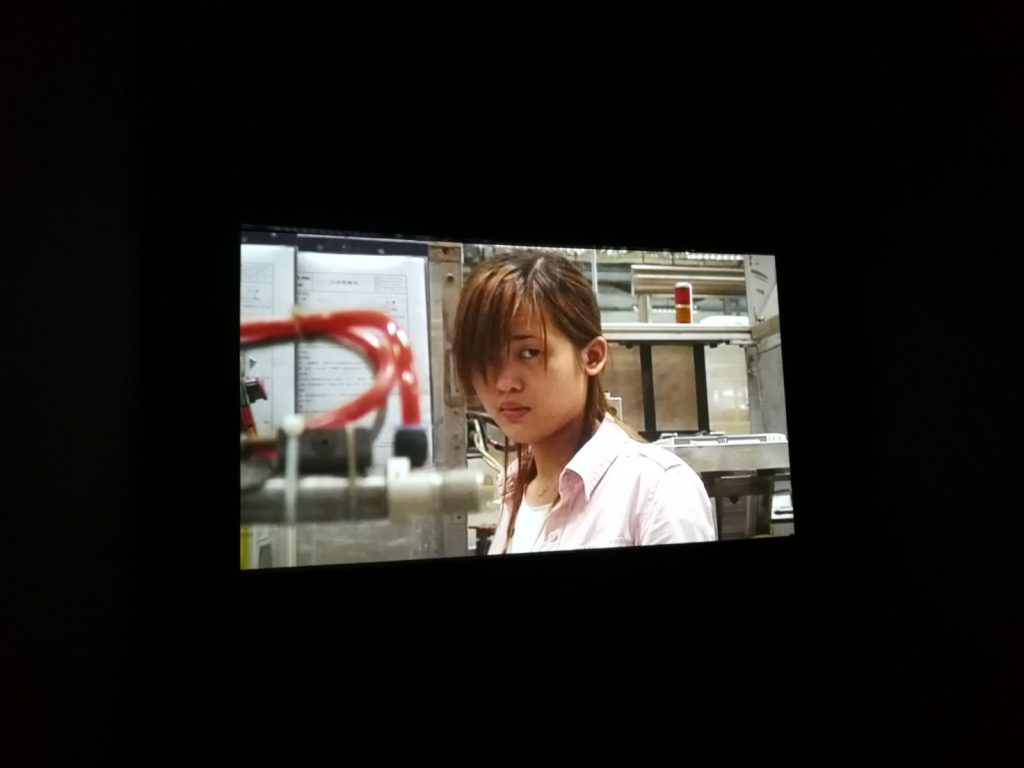 Although it is not an interactive exhibit or device, I could associate it with consumer grade interactive devices which is abundant in markets and people around us. The reason why this exhibit was so impactful is because it just ONE of the factory making ONE of the consumer products. Imagine a factory where they make interactive electronics such as I Phones, Laptops and etc. How many more factories like these will there be and how many more people will be like them? There are more components in a consumer grade interactive device than in a lightbulb. 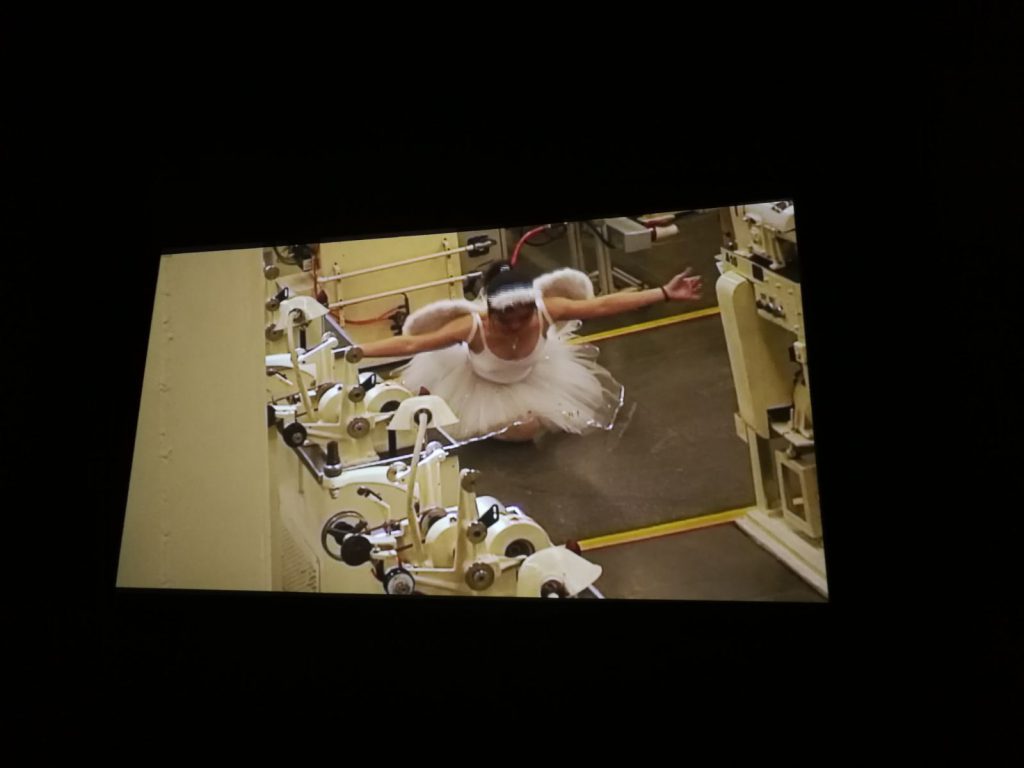 This exhibit actually makes me think about the existence of the consumer grade interactive devices and who are these devices really benefiting? As the name suggests Whose Utopia, this exhibit struck me deeply into pondering Whose Utopia are these workers really making? There are 3 chapters to this exhibit. First chapter, the manufacturing process and how people interact with the machines that made the glass. Second chapter, people trying to achieve their dreams by performing around the factory. Third chapter, the videography of factory worker’s faces. Each chapter tells a story that eventually lead to the question (linking back to interactive devices): 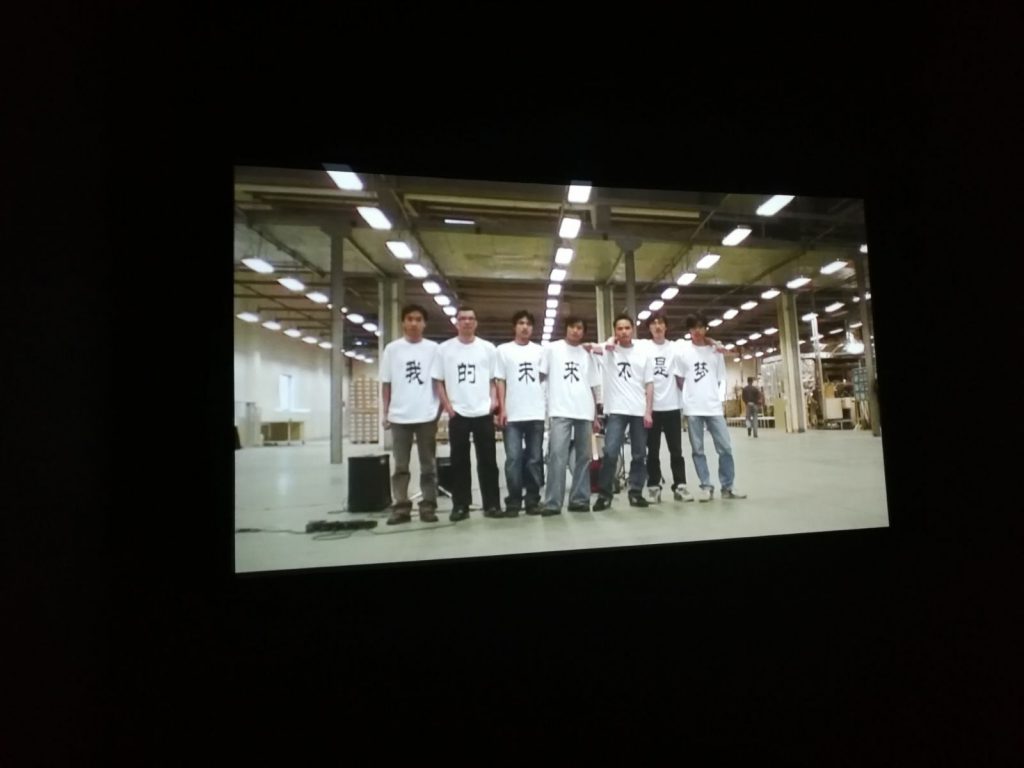 At the end of the video, this picture was extremely powerful. In the picture, there is 7 workers from the factory wearing t-shirts that says: My Future Isn’t A Dream, which comes off as ironic. The fact that the future of the company is built upon them and the company instills the idea of working to have a better future is a ‘sweet lie’ that everyone bought.

The reason why I strongly felt it was bittersweet is that these factories are actually helping the society in general while destroying dreams of the ones who works in it. If they don’t work in factories, where else would these people work? How are they going to survive? We could argue that they could just go back to farming, but for them, the ‘dream’ that they are seeking is not fulfilled. 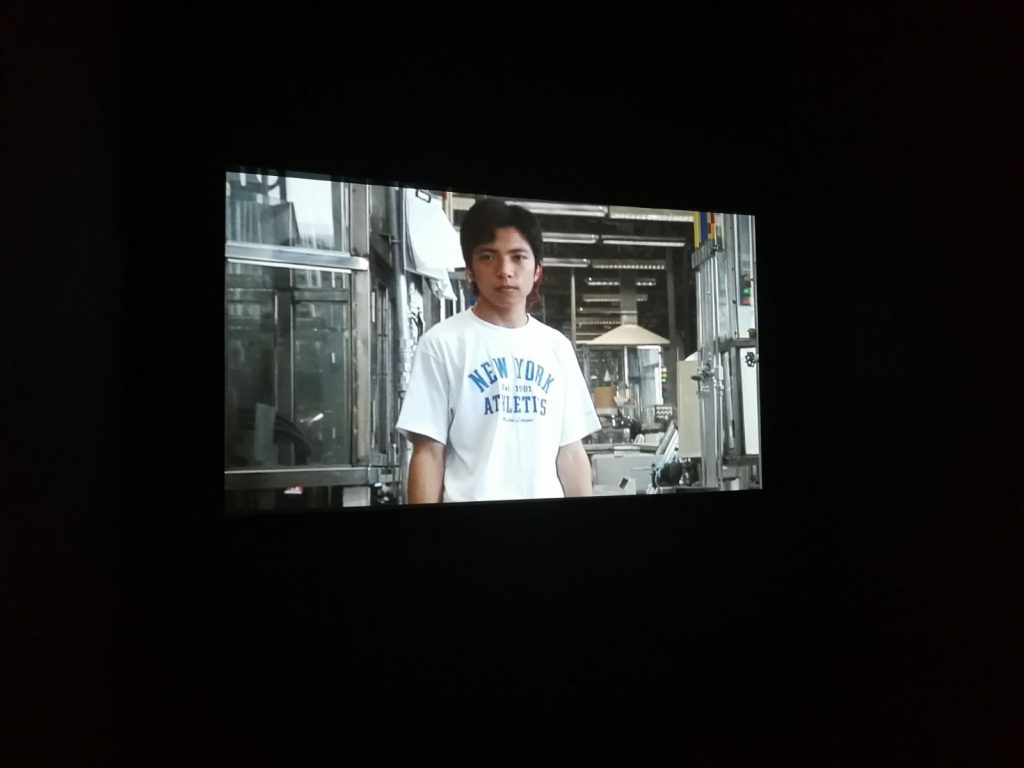 In conclusion, Whose Utopia leads me to see the positive social impact of consumer grade interactive devices and how it is able to create a MASSIVE number of jobs for those who need it. Contemplating from both perspectives (the business and the workers) I was able to see the contrast of advantages one (business/factory) can provide to the other (workers/consumers). Whose Utopia trigger me to question the importance of consumer grade interactive devices and how they bring stability(the assurance for jobs) and chaos(destroying dreams) to the society.