In this report, I will write about one of the talks followed by one work from the exhibition. 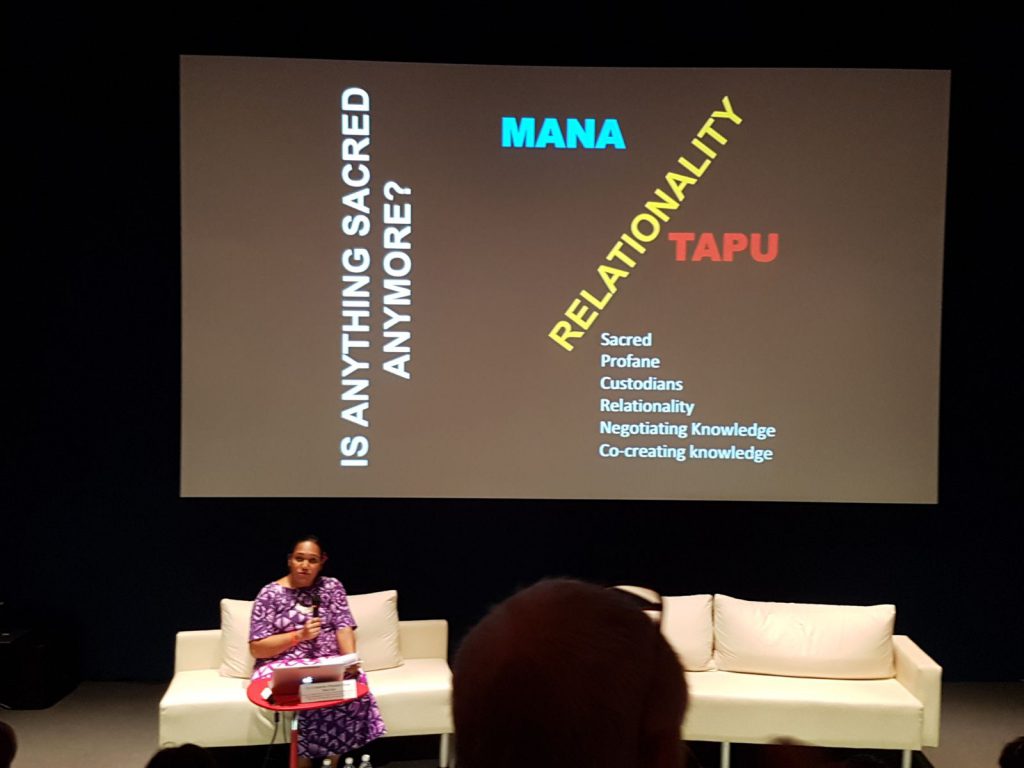 From ‘Is Anything Sacred Anymore’ a case study presented by Dr. Cresantia Frances Koya Vaka’uta, I was intrigued by how she viewed ocean as compared to us, people from the city. Her stories engaged my thoughts on how the developing world affects our relationship with religion, environment, family and community. By telling a story, it is a good way for the crowd to know how today’s developments effects on places that is often neglected. I think Dr. Cresantia Frances Koya Vaka’uta could be an advocator on inclusive globalization/development a term coined by Jack Ma when he talks about globalisation and the saturation of technology. Very often, development fails when governments neglect the needs of the people it is designed to help. Inclusive development allows a wide scale approach that values and incorporates the contributions of all (the community and the developers) in addressing development issues. It promotes transparency and accountability, and enhances development cooperation outcomes through collaboration between civil society, governments and private sector actors. 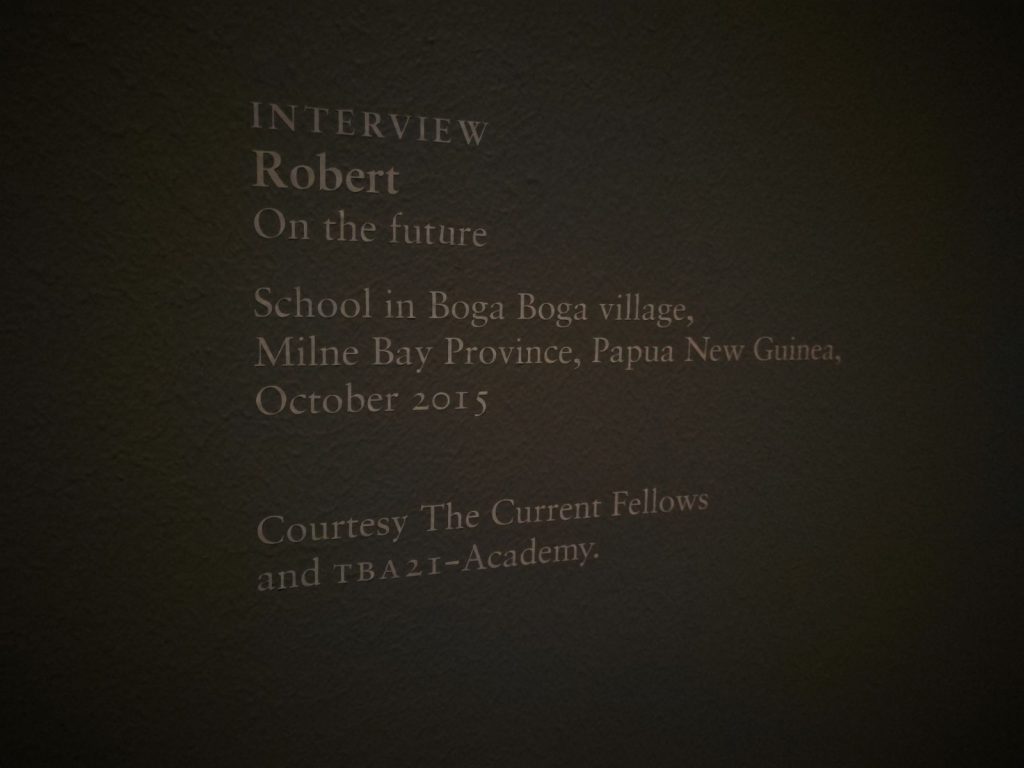 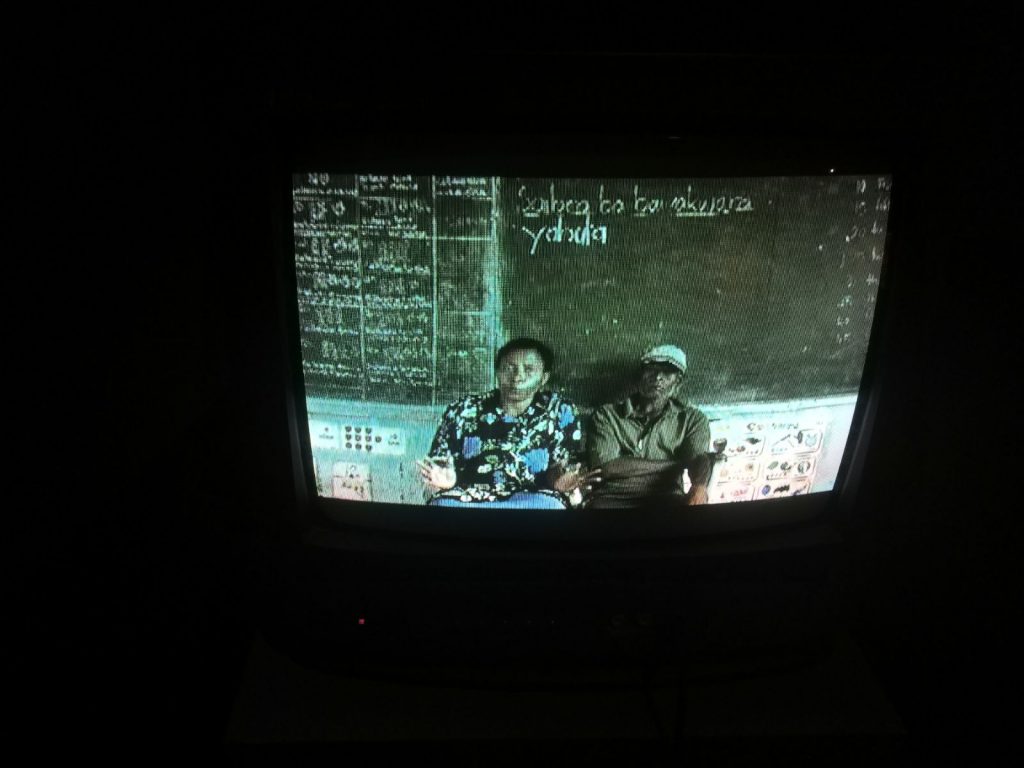 From ‘The Oceanic’ exhibition, I was most taken aback by the interview by The Current Fellows and team with Robert ‘On the future of offshore drilling’ in a school in the Boga Boga village. Robert was sceptical about the development as she predicts that development like this will be more benefical for the developers rather than the native community. This will cause massive cultural loss. I was also amused how many times she mentioned to make the school a better place. It is quite an irony that development aims to create a better future for the generations to come, but in turn, it translates to more waste and lesser humanity in terms of culture and heritage. This interview perfectly shows the juxtaposition of ideas for a land that would soon be commercialised.

In conclusion, both the case study presented by Dr. Cresantia Frances Koya Vaka’uta and the interview by The Current Fellows and team with Robert ‘On the future of offshore drilling’ highlights inconsiderate developmental goals that will slowly depreciate culture and heritage. From today’s talks and exhibition, I worry that development and technology may be improving but humanity as a whole is taking multiple steps backwards. I believe that arts could plays the role of connecting people through experiencing and understanding different cultures and philosophies. Although arts can be at the forefront of spreading ideas and issues around the world but it is up the audience to listen to what the artists want to convey. 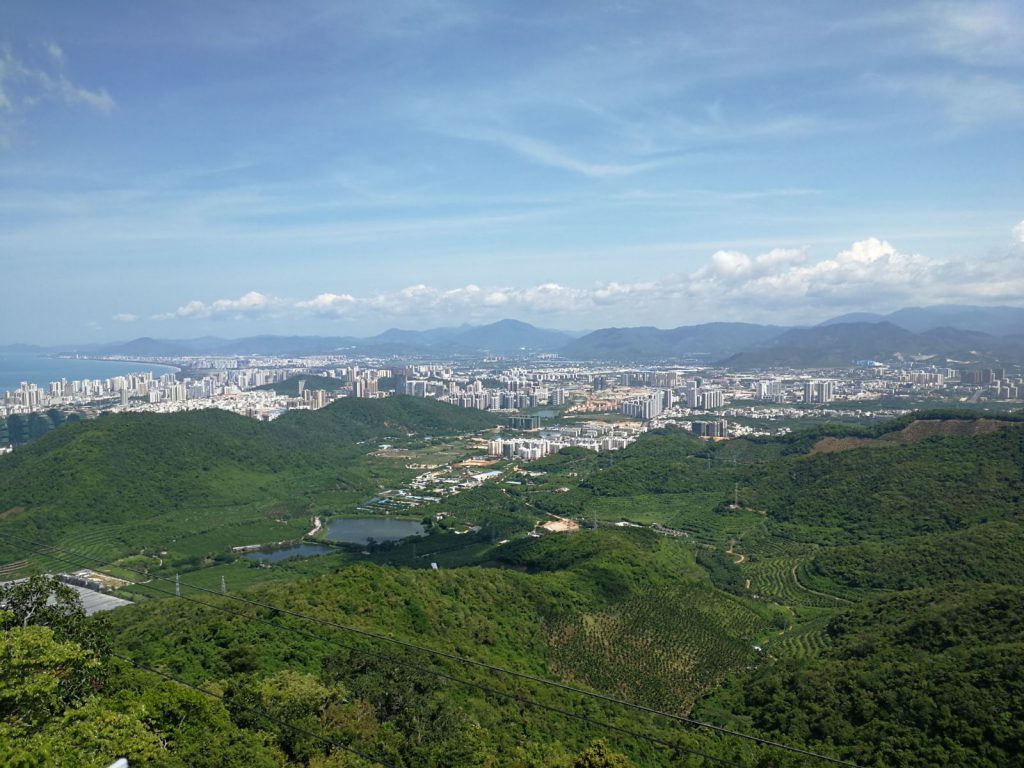 This is a story that I want to share which I shall not include in the report (for learning purposes and as an example). This is an example for non-inclusive development. It is about my trip to Sanya, Hainan in 2017. When I went there as a tourist, my parents would ask the locals how much houses costs so that they could compare the prices to houses in their own cities to gauge the ‘ranking’ of their city against other cities. Sometimes vice versa. We were quite shocked when many locals said that they are not able to afford a house and could only rent an apartment in their own land. As most of them work in entertainment/resort companies with average pay, the pay could only sustain them for food, lodging and daily necessities. Sanya is a highly visited place in China as it is well known for its beaches and coastal resorts. Thus, many rich Chinese citizens would buy a house there just for leisure which resulted in the increased demand of the houses (jacked up the housing price ALOT). This in turn affected the locals greatly. Houses were around 1 million per apartment while the typical locals earned 4-6K RMB per month. Many were unable to afford their own home even into their thirties (some couples even have children) due the the influx of buyers from the mainland.

← More About Me
Reflection on Thoughtful Interaction Design →