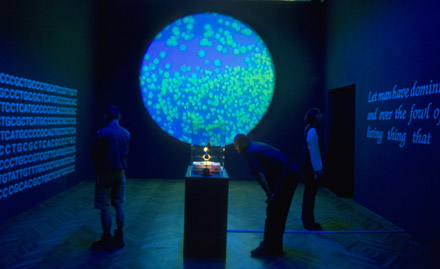 Starting as a performance artist, Eduardo Kac expanded his range of works by experimenting with technology in art. His first few years saw him exploring holography as new forms of interaction in works. Interested in the possibilities of telematics and telepresence, his new media works began to dive into themes of genetics and new biotechnologies, merging technology, politics and aesthetics .

Kac coined “telepresence art”, “biotelematics” and “transgenic art” as new areas of technological art, shown through his works and writings.

“Ornitorrinco” 1989-1998:  a telerobot that would respond to signals sent through selected telecommunication devices from different locations, where a remote audience could. (Telepresence art)

“Teleporting An Unknown State” 1994-1996: a system for a plant to grow and live in a gallery, where its light source is provided through viewers of the work on the Internet. Video of an image of the sky in the viewer’s home location is projected onto the plant. (Transgenic art)