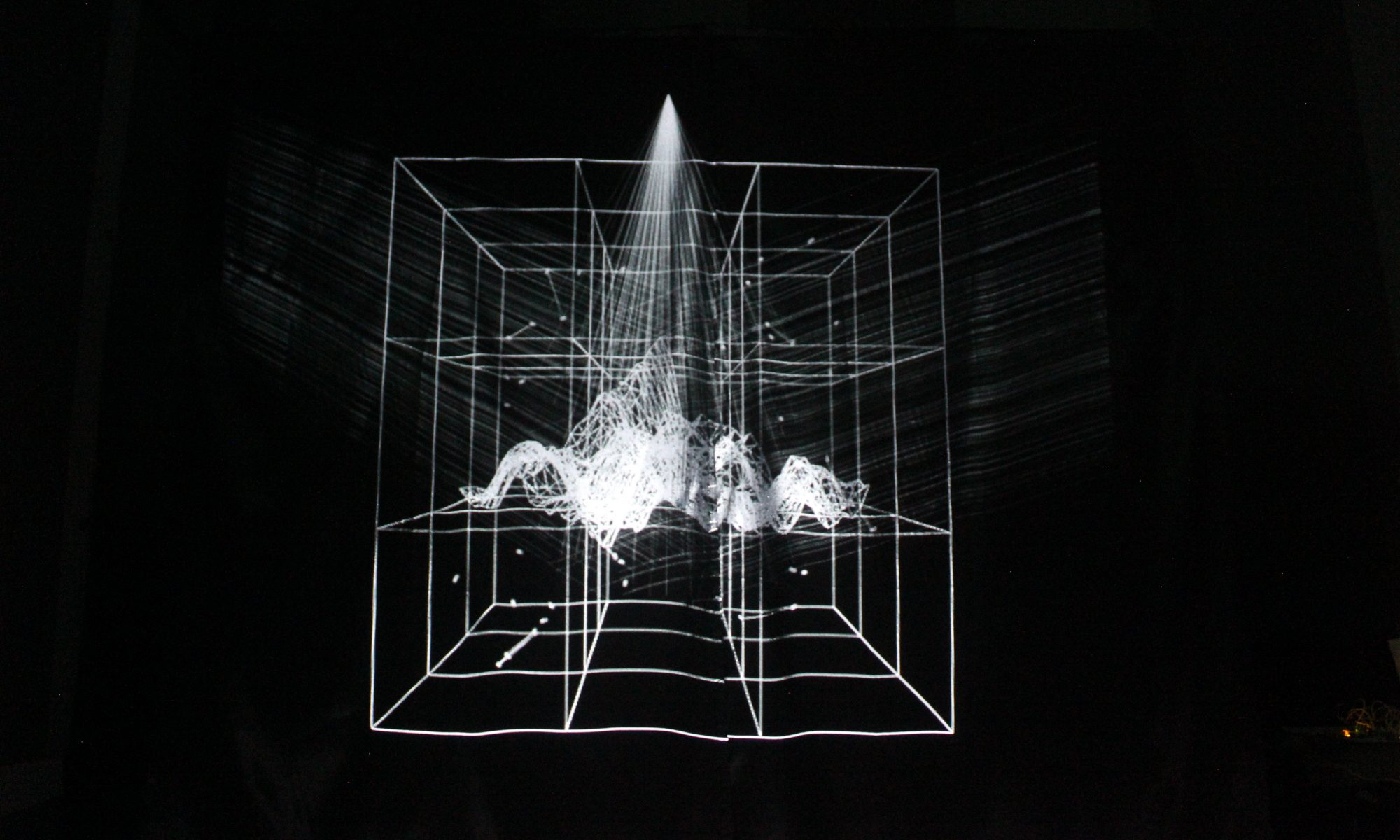 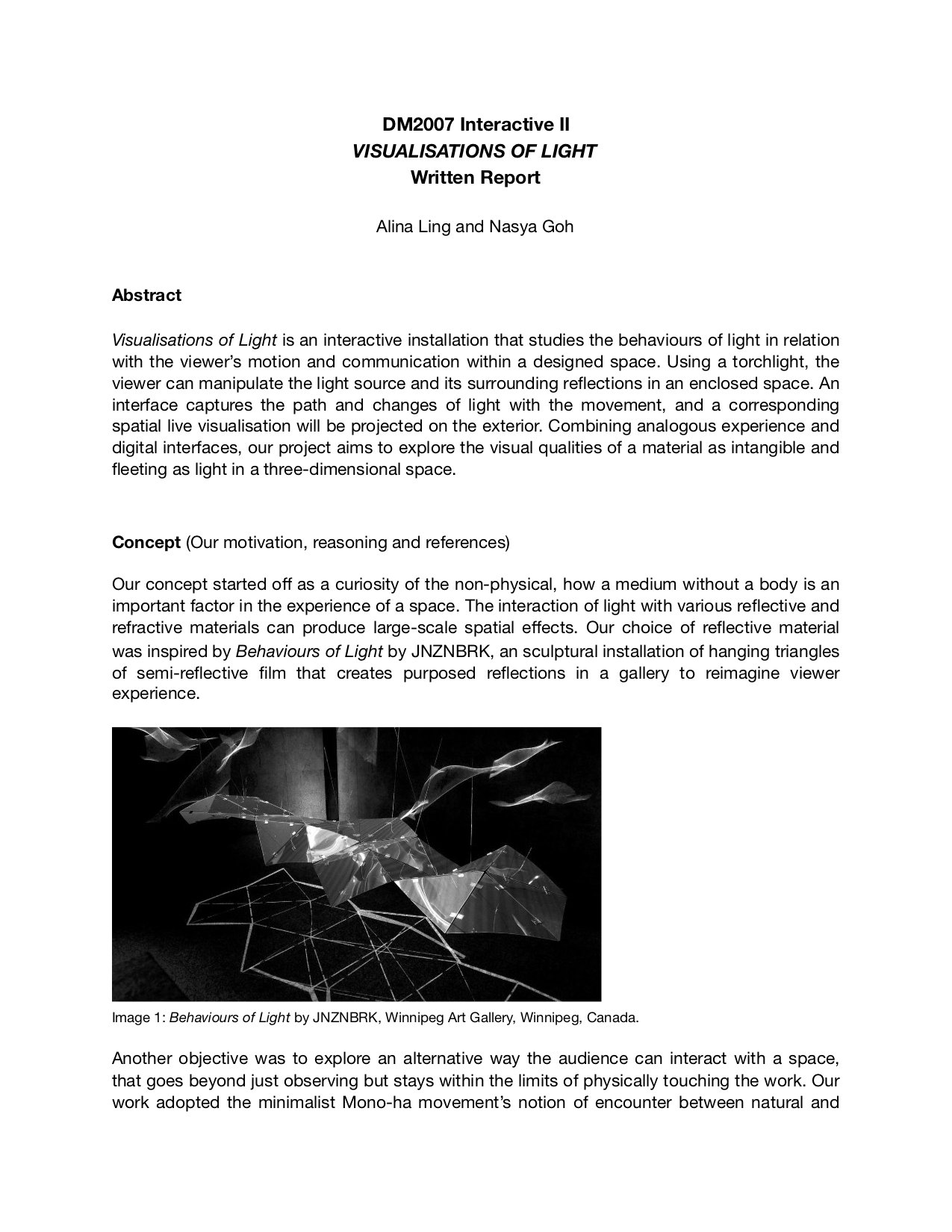 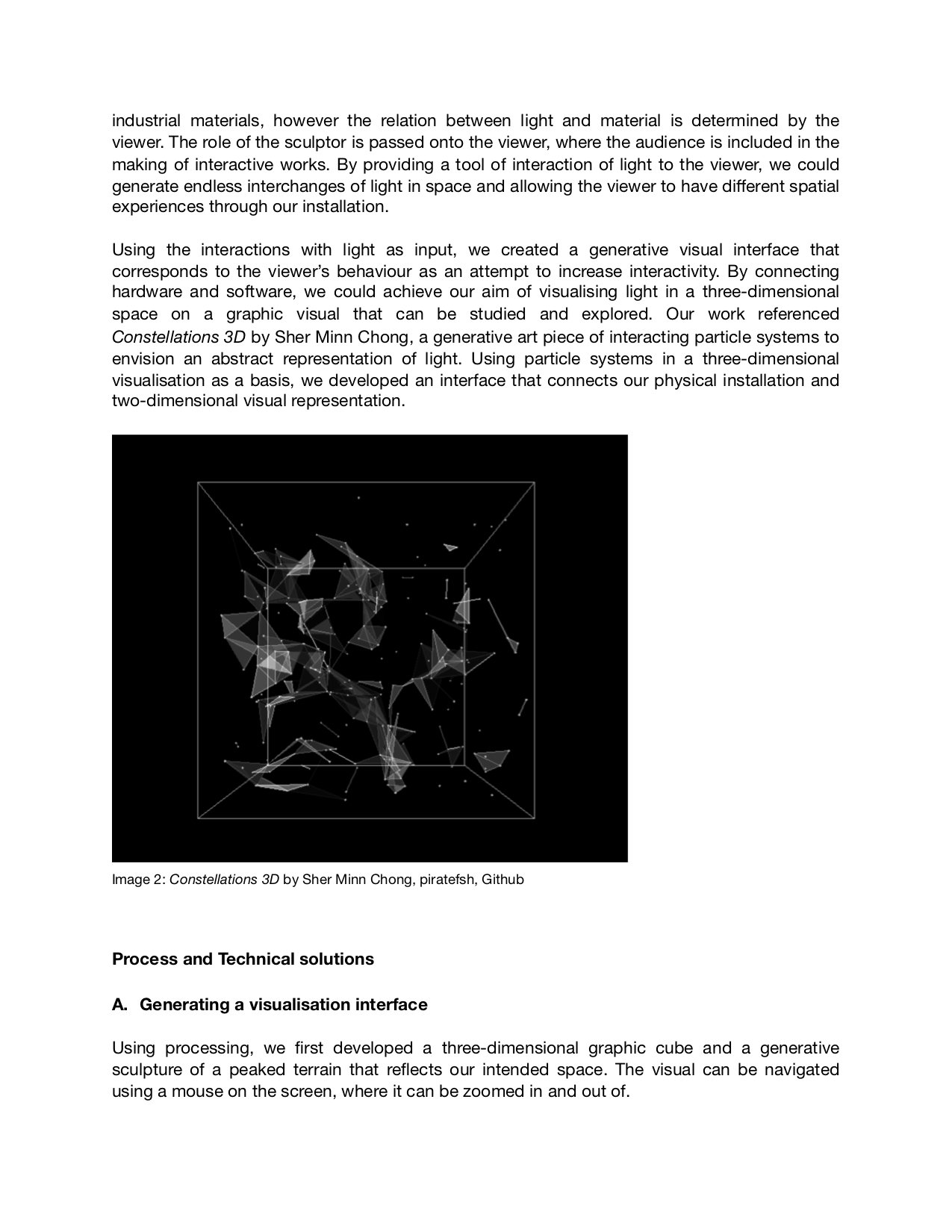 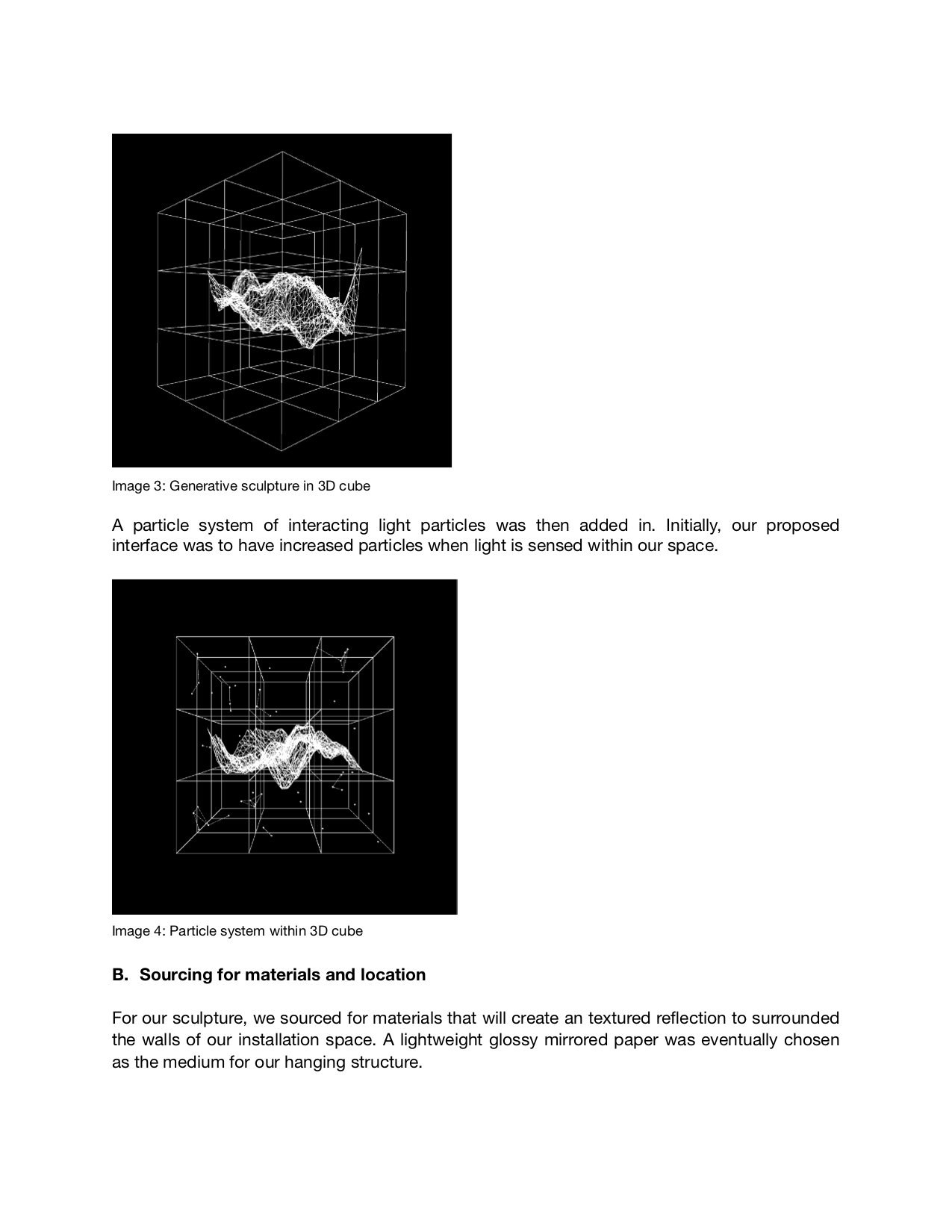 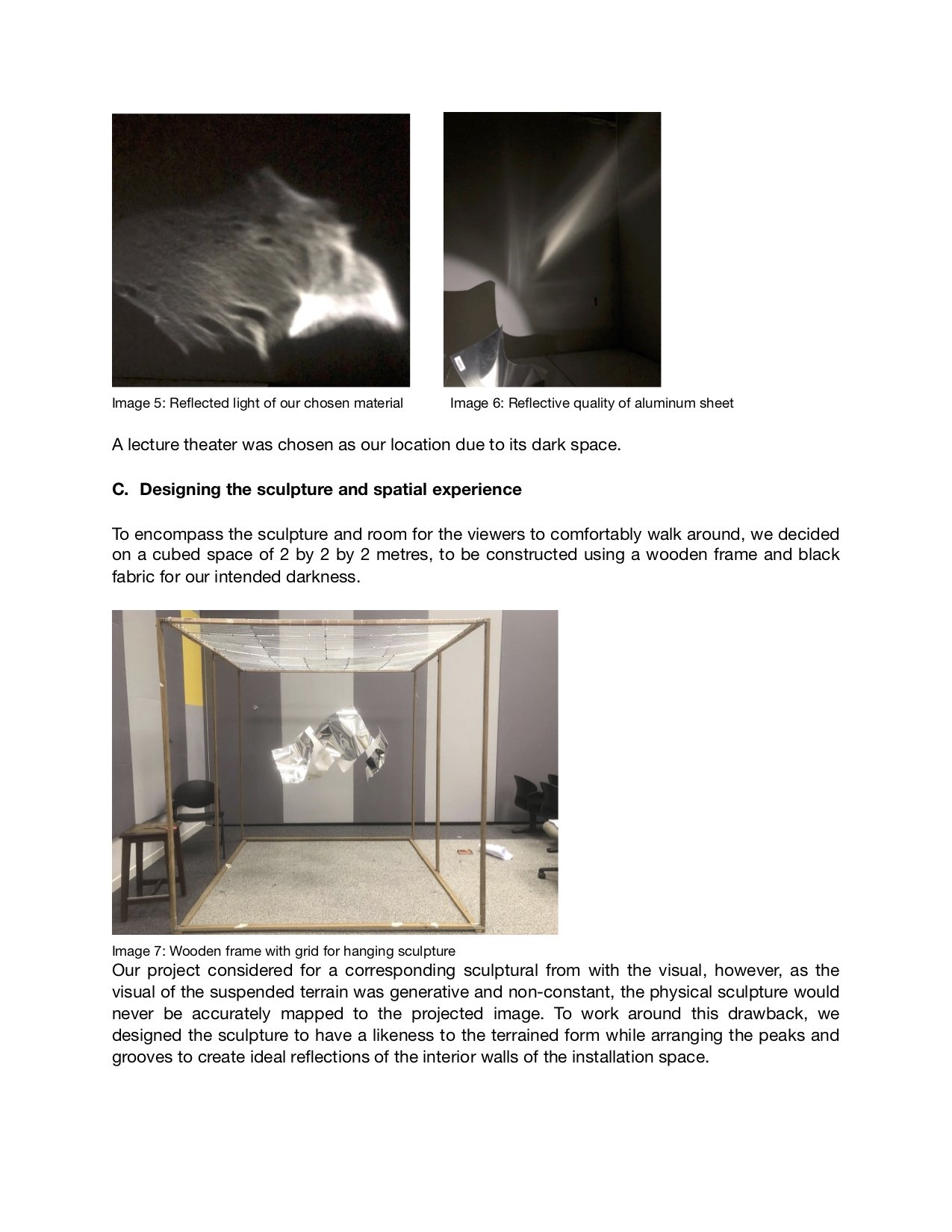 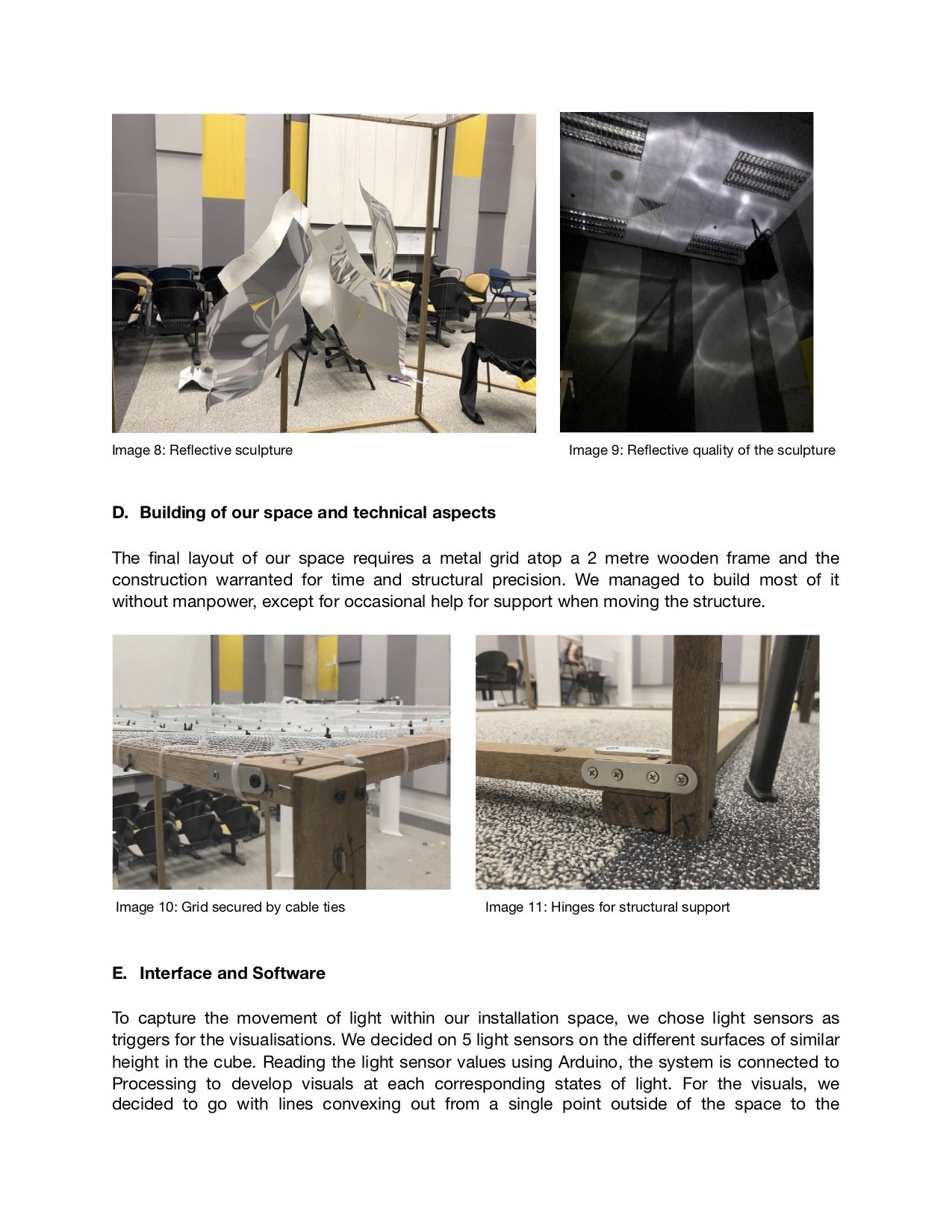 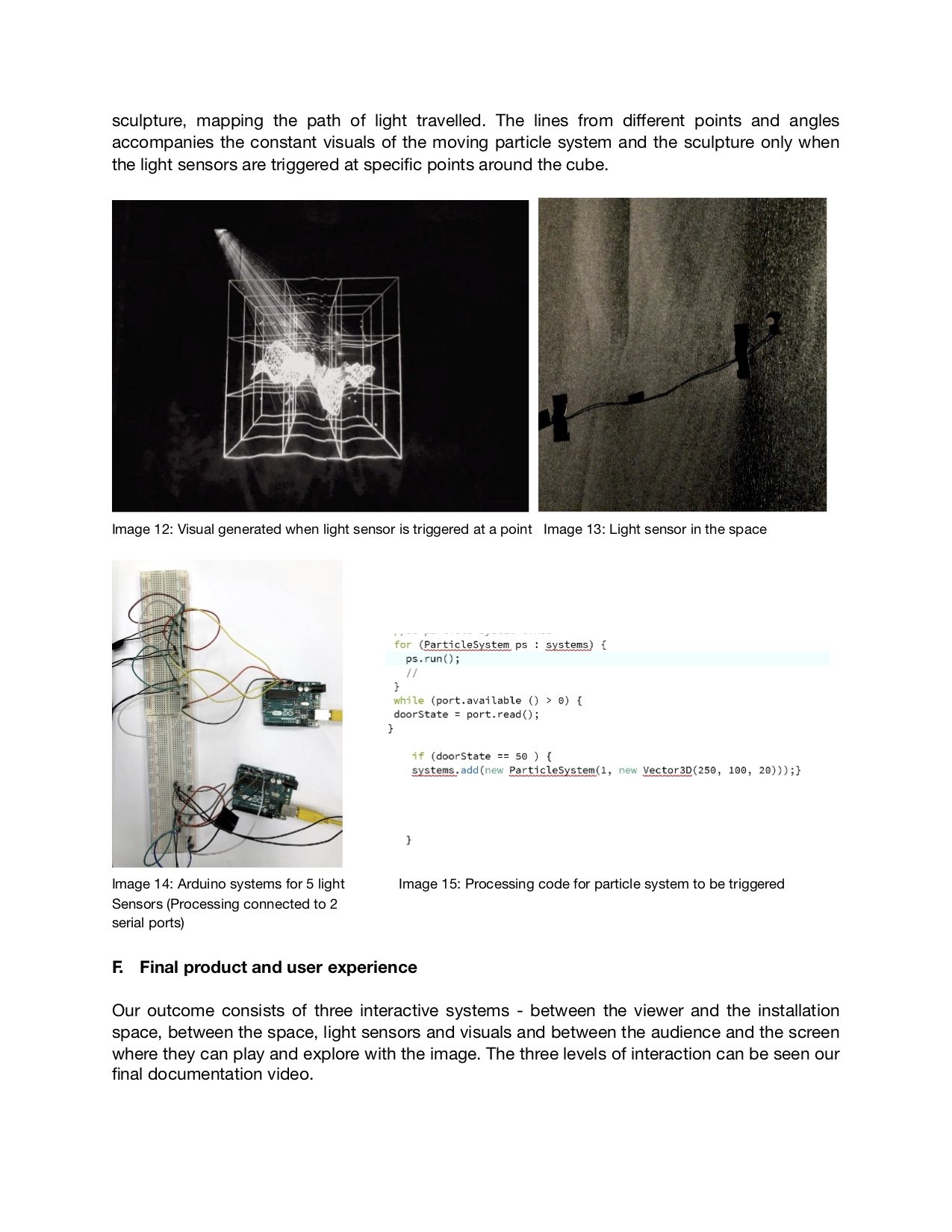 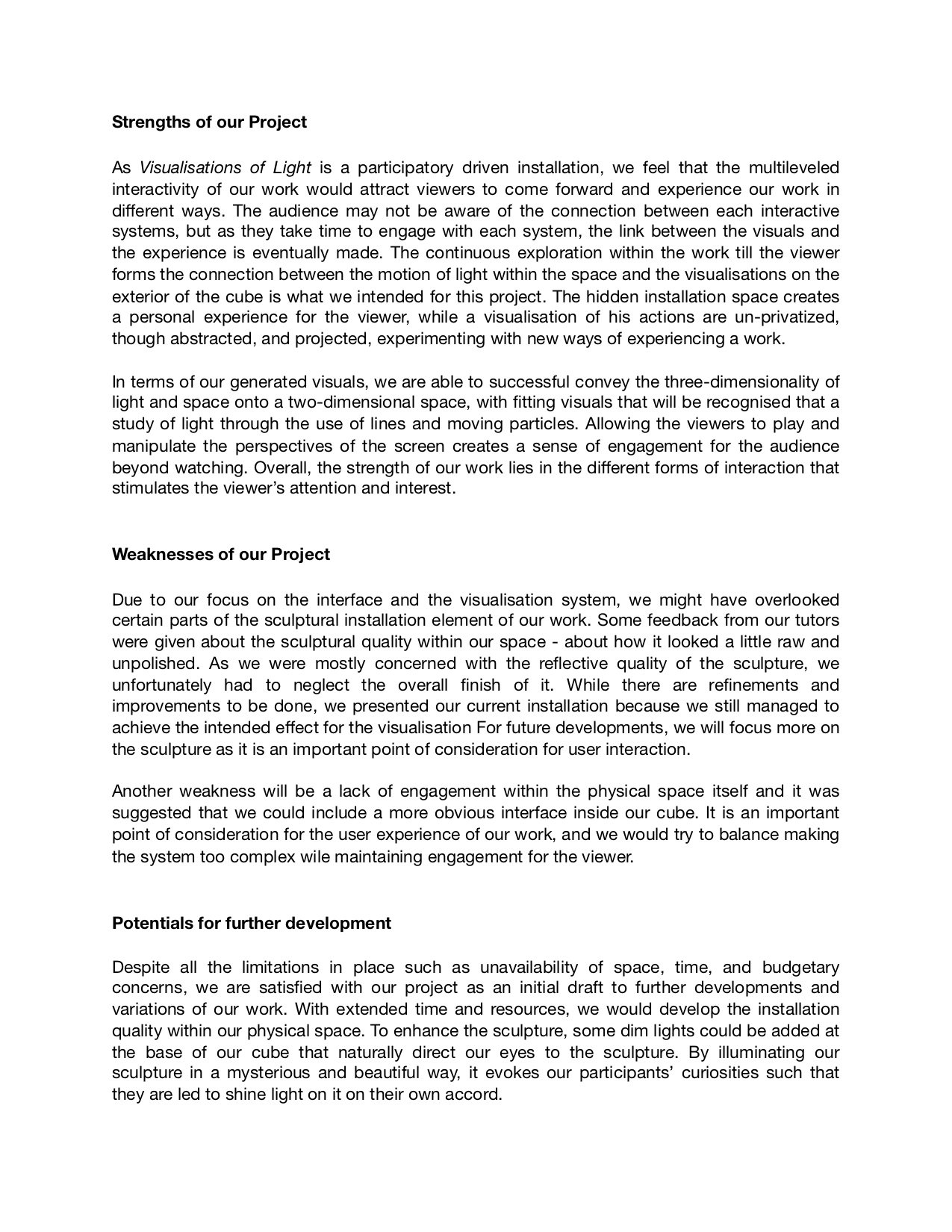 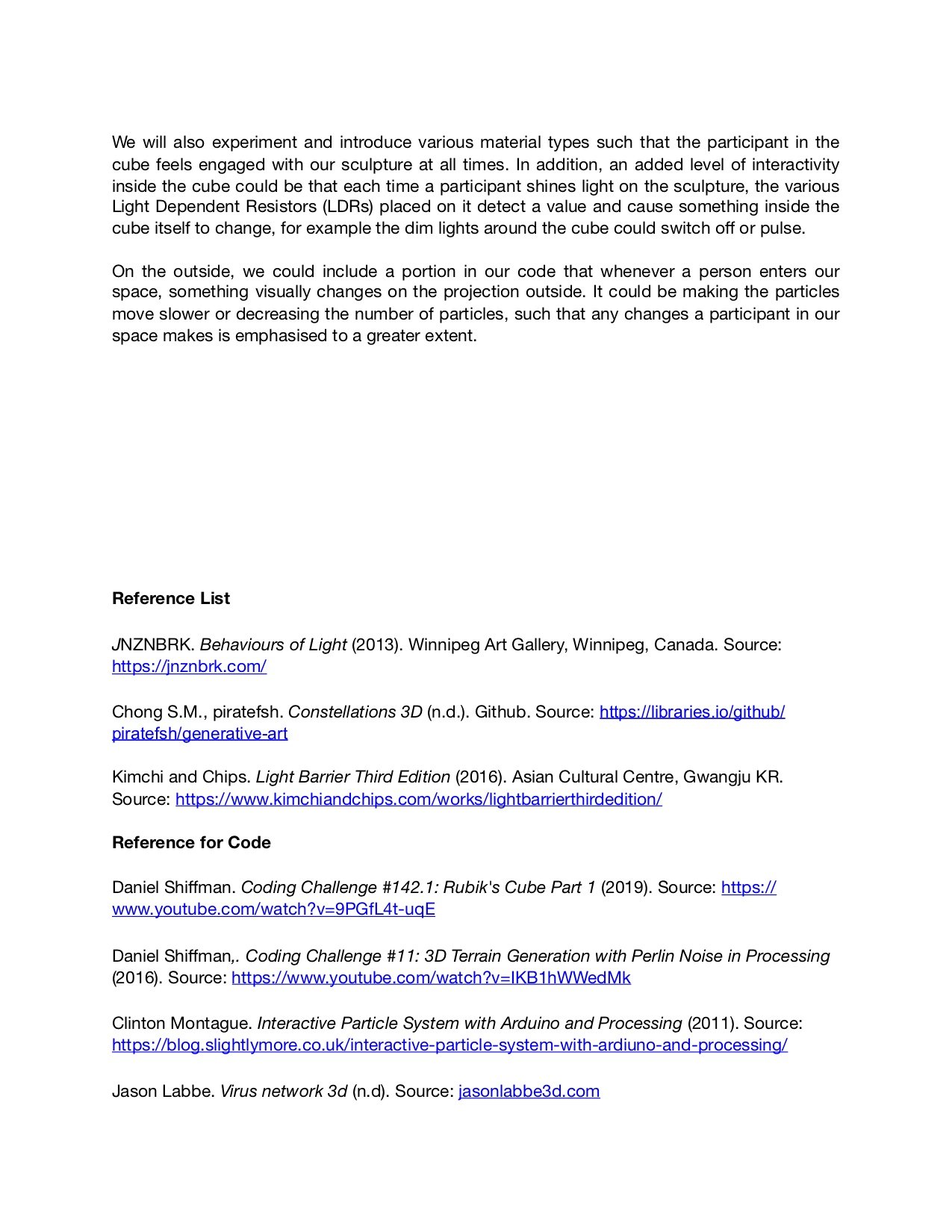 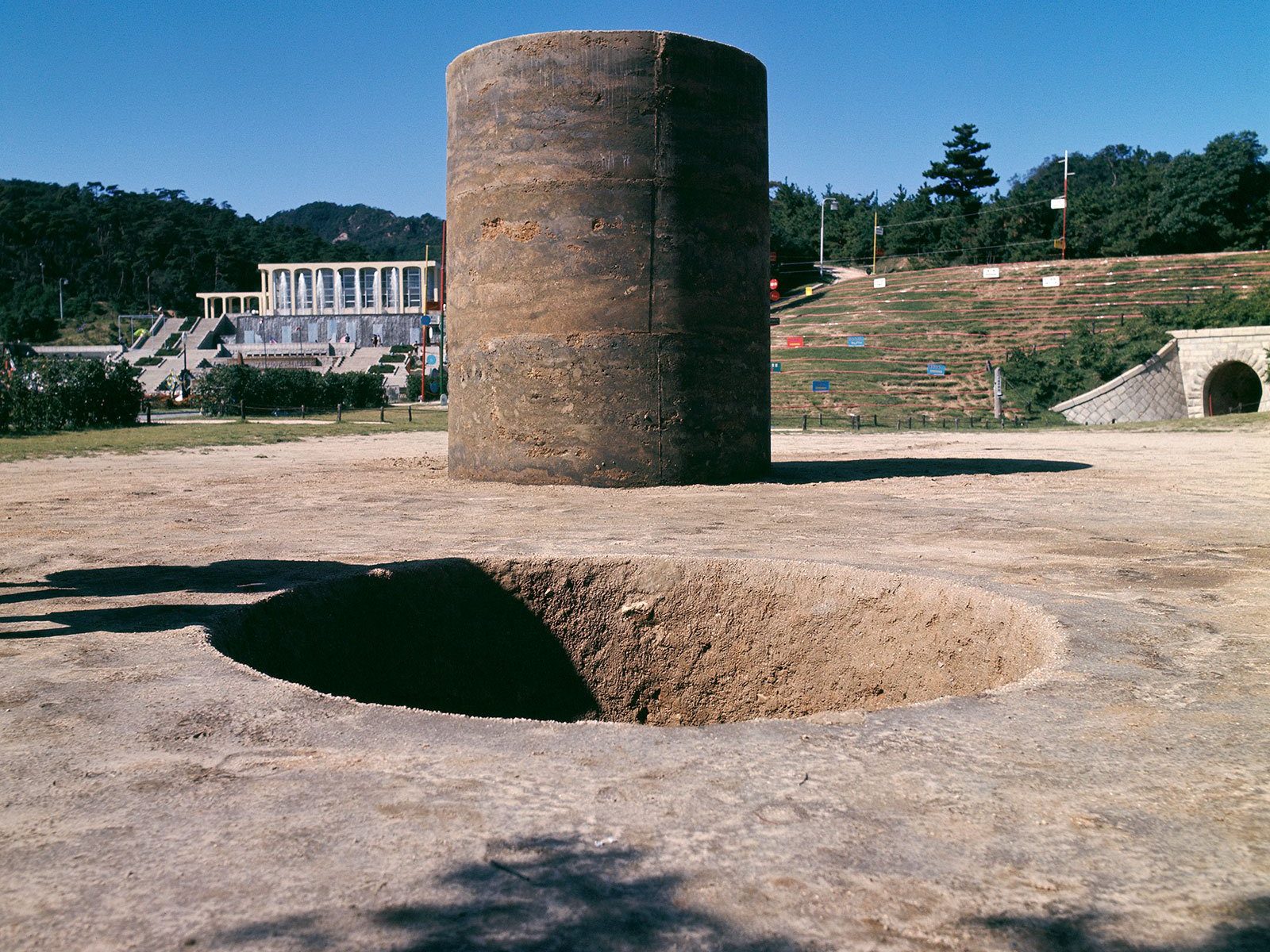 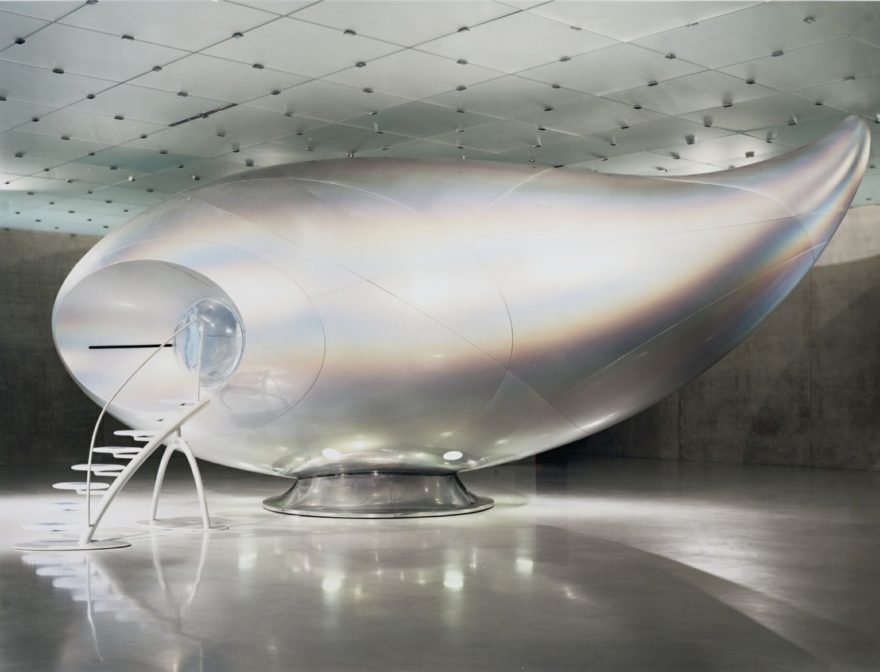 Interactive art that inspires me combines new media technology with the physical to redefine the human artistic experience. New digital possibilities allow for inventive forms of interaction to experience art. The following examples of interactive art works manipulate and use the intangible (light, sound and new technologies) within a designed space that balance between physical beauty and revolutionary transcendence.

Wave UFO (1999 -2002) is a large scale interactive installation by Japanese  digital artist Mariko Mori, whose futuristic works challenge reality. A streamlined ovoid-like structure is constructed with fibreglass to contain an interactive capsule within. To enter the space, the participant must ascend stairs of circular discs and through a bubble-like automated door. In the inner cavity of the structure, there are three chairs made of Technogel, which mould to fit the form of the participants who lie on them. A vision dome is stretched across the interior surface of the capsule where projections are captured.

Combining art with technology, this work involves fitting the participants, three at a time, with electrodes that measure brainwaves. The interaction combines neuroscience, computer graphics and sound to project the live “thoughts” of the viewers in the form of moving abstract cell-like orbs onto the vision dome where they are in view of. The use of architecture and engineering in the construction of space and the series of animations produced using the biofeedback create a transcendent and surreal experience of Mori’s futuristic visions.

Another interactive work that manipulates the intangible, sound and light, within a constructed space is Spectra (Terminal 5, JFK) by Ryoji Ikeda. The commissioned installation at JFK International Airport created was a luminal tunnel with a plunging vanishing point where the viewer is subjected to intense brightness of an utopian but unnatural state.

Within the space, sounds of ultra-frequencies are played which are inaudible to the human ear. As the viewers walk down the aisle, the movement causes subtle oscillation patterns around their ears. The dynamic experience of sound caused by the physical interaction with the space creates an ephemeral experience in travel.

“Exhibited” in virtual gallery Paper-Thin created by Daniel Smith and Cameron Buckley, Carnate is a virtual reality installation which explores light, space and material in another dimension. Paper-Thin is a virtual art platform that is designed to look like a real exhibition space, providing a grounding and familiar framework for artists to explore within without the constraints of the physical one.

Carnage explores space with anti-gravitational boulder-like structures  and glowing walls and light. The virtual model and work expand the possibilities of space and installation but redefines the interaction with in works. The viewer navigates the modern art space using arrow keys on a screen that can be access anywhere and at anytime due an open database. It is an alternative to experiencing art but it questions the experience of a space on a two-dimensional surface.

Your thoughts come to life in Mariko Mori’s UFO