To create a 1 minute video using Instagram’s unique feature of video chat to create a performance via four split screens. The objective was to create a Third Space, a virtual world shaped by ourselves.

Being in separate locations, we knew that we needed something to help ‘sync’ us together. Hence, our idea was to create a mini music video which we could all choreograph a routine and perform together according to the beat of a song. After brainstorming, we decided on the very catchy and high recognisable song ‘Take on Me’ by A-ha.

After spending the first few minutes selecting a suitable song, we started creating a choreography that we could all easily learn and perform within the time limits. Basic movements such as simple shoulder shrugs, head turns and the snapping of fingers slowly transitioned into the idea of creating shapes using our arms within our individual frame positions. This created an illusion which was a combination of movements within two frames. When we were ready, we began to screen record our mini performance from four remote locations. As we could not converse in real life, we decided to take our conversation online where we gave cues via the Instagram group chat. 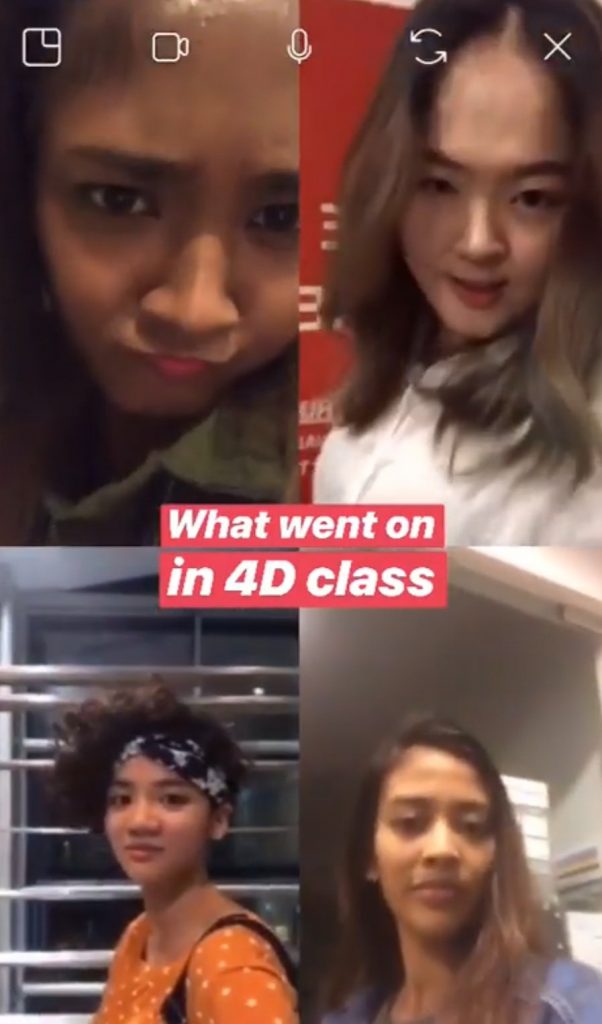 Within the time limit, we were able to complete our performance recording after several practices and discussions of the dance moves. However, in spite of multiple attempts of screen recording, our choreography was still not perfect and entirely well-coordinated. Interestingly, we realised that with every attempt of screen recording, we seem to encounter a small new different challenge. For instance, when we first started off, we had to pay attention to the order of the phone screens as it had an impact on how we will coordinate our dance performance. From here, we realised that the user’s perspective should always be the crux of an interaction, and when coming up with an idea, we should focus on how it will be received from the audience’s pov. To counter this challenge, we decided to focus only on one person’s phone screen to direct and coordinate the performance. This gave only one person a clear view on the outcome of the video, where she is able to give instructions for the rest of us to follow. This meant that the rest of us have to learn to communicate and trust the person in order to execute the performance. With full control over the entire performance, there was only one person who could shape the outcome of video although there was a total of four participants.

What we learnt during this process was that although some performances may be planned and practised, there will always be bouts of unexpectedness that requires an impromptu reaction. Similar to a third space, where some interactions have been created with a certain goal or process plan, a creator should always be aware of the infinite possibilities where something may not go according to plan.

Micro-Project 1. As the main creators behind the images, we get to decide on the locations as well as the elements of it that we choose to feature. What was mainly shared during this project had personal significance of varying levels to us, and we had the choice to create and curate the images. Hence, as a creator of the images, I had ultimate control over what I choose to share in the virtual space. However, being a part of the hashtag #1010adm did tilt the balance of control. By putting the images up on this alternative virtual space, there was an open role for the public, regardless of whether we knew each other in person or not, to interact with the image. They can freely choose how they wish to interact with my pictures, be it to like, comment or ignore the images. Since I chose not to caption my images, the pictures were mainly up to the audience’s own interpretation, which I had no control over. Comparing this project to the other projects, I feel that I had the most creative control over this project because I could make the ultimate decision on how the images outcome. Looking at the entire interaction however, I realised that as a creator, no matter the amount of control one might have during the process, you can never fully control the engagement which the audience choose to have with your work.

Micro-Project 2. By involving the public viewers in the generation of questions, we never really know what to expect. Although we tried to narrow down the options by giving them only two choices to choose from, which gave us some control over the process, there were moments where we had to think of the next planned action on an impromptu basis, in accordance to the audience’s choices. Hence, this project was quite unpredictable because every action was a form of reaction, based on the audience’s engagement with the work.

3) Which project best illustrates the concepts of DIWO & OpenSource?Why?

Micro-Project 3. The DIWO concept is best illustrated in the team of four members having to work together to produce an outcome. Having only one person being aware of how the final video might look (as we based the video frame positioning only on the person who was recording) puts the person in the position of greater control of the project. Without means to see or communicate verbally, we had to rely on that one person for instructions while we try our best to coordinate with each other. With the frame consisting of two or more frames, we had to work together to create the final outcome. Furthermore,  when we first started discussing, we google searched for inspiration and ideas, which was in itself a benefit of the open source Google system.