Founded in 2016, the Inter-Mission collective consists of local Singaporean artists Marcel Gaspar, Urich Lau, Shengen Lim and Teow Yue Han. Focusing on both collaborative and interdisciplinary works, they mainly engage and create through video art, audiovisual, performances, installation and interactive pieces that discusses the role of technology within art. With the aim of becoming the bridge between technologically driven works, the creators and their audience, the collective seeks to encourage conversation and reflection amongst everyone, particularly in a time where our technological environment is consistently evolving.

Out of all their works, The Lapse Project caught my eye.

Does technology help us to remember, or forget? 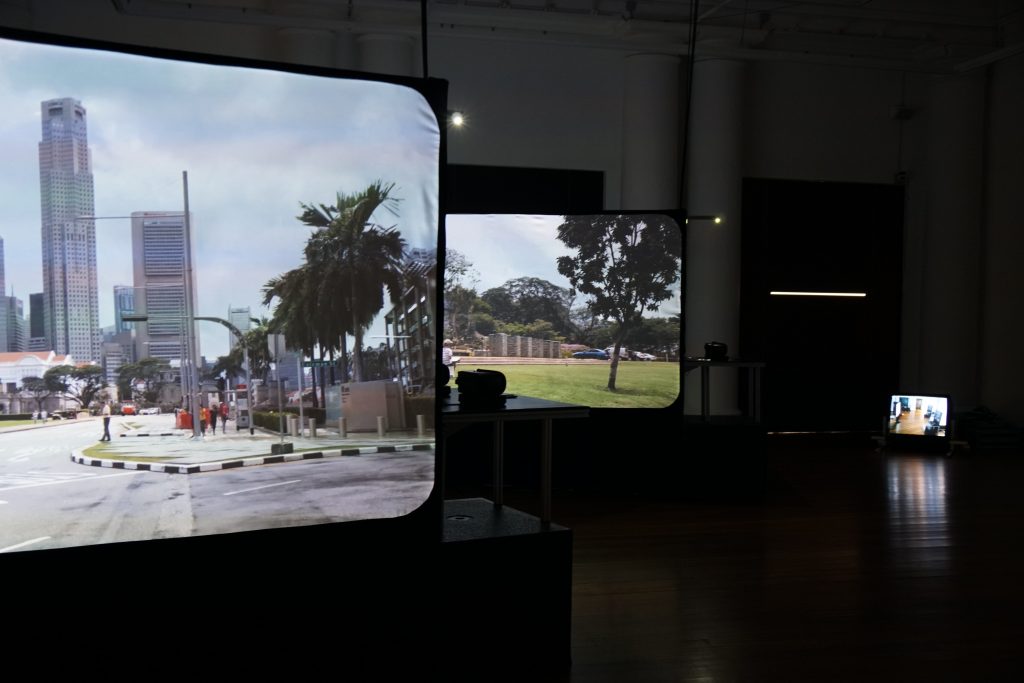 In this interactive piece, topics of memory, space and legacy are questioned through lapses in time, space and structure within the Singaporean context. The audience are invited into this space to embody and re-imagine a world crafted through digital interfaces where origins of cultural and artistic identities become editable. Through clever digital manipulation, familiar landmarks such as the Singapore’s oldest building, The Arts House, is erased off, allowing one to immerse in a space of imagination and foreign nolstagia. 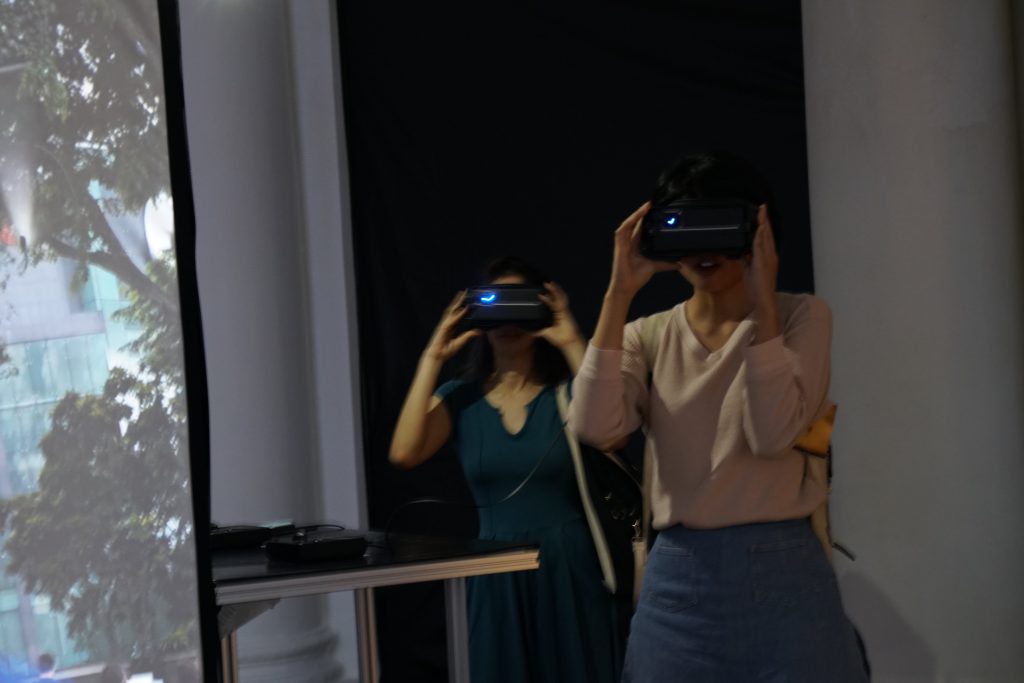 By re-constructing an imagined world where British colonialism and its architectural remains were never once present, the audience are forced to confront the following question: “What would exactly define our Singaporean art practices and its artists if none of these cross-cultural influences happened within our arts scene?” 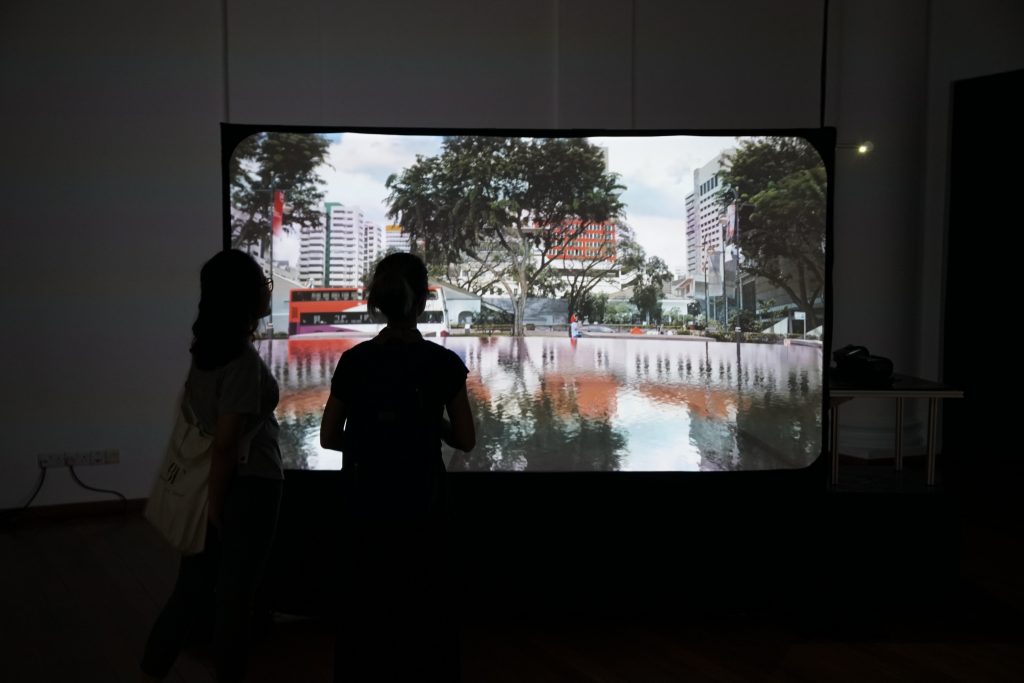 Through absence, do we truly re-think about its purpose and presence.

This project reminded me of a discussion amongst my friends and I that took place during Singapore’s Design Week last year. While browsing through works from various local designers and illustrators, one of my peers commented that most of our design senses were ‘borrowed’ and that the Singaporean design would be empty if not for our ubiquitous ang ku kuehs, dragon playground and Peranakan motifs.

If we remove all of these, what would be left that makes the Singaporean design truly unique?

I think that to preserve our ‘unique’ sense of design, it is essential for us to re-look and reframe our idea of what art is, and to be more receptive towards alternative perspectives. Our identity is made up of a melting pot of influences; the exact thing that makes our design aesthetic unique in the first place. Hence, we should continue working upon that by developing our receptivity and seeking to push beyond boundaries. Apart from that, this project also makes me realise how important preservation and documentation is, in a time where things are advancing rapidly. Without researching upon this project, I would not be reminded of the ‘older Singapore’ which leaves me with a very nostalgic feeling. From this, I am reminded that it is crucial that we as creators seek out ways to explore different methods of preserving memories in time and space, particularly in a time where technology is existent.

Disappearance, Bar in the Gallery by Lee Kang-So:

When I first entered the small space, the first thought that came to mind was “Wow, this looks avant-garde.” With the Korean pub-inspired set up contrasting against the sterile white environment of the gallery space, the inhabitation of Life Circuit within the space only proved to be another level of juxtaposition to this abstract interactive piece. Compared to the Disappearance, Bar in the Gallery, the technology-driven performance done by the artistes Urich Lau and Teow Yue Han was almost a direct contrast; the first work inspired by the past, and the latter inspired by the future. I felt that the futuristic headgears fashioned by the artistes looked really cool, and reminded me greatly of the Tokyo City’s cyberpunk theme. Through utilising modern technology and gadgets such as webcams and projections, the overall performance created an alternate reality that engulfed the audience in a moment of suspended disbelief. By projecting what is seen by the wearer onto a screen, the audience is able to observe themselves and the artist’s own movements recorded through another perspective, in the exact shared space everyone is in.

I personally really like the headgear, and find it interesting how Yue Han reconstructed it using objects like welding goggles, ear muffs and gas mask, converting them eventually into a tech-based wearable gadget. Behind Life Circuit, the idea is to utilise the futuristic tech headgear to transform live feed into electronic output; what the artist sees and hear, into a projection publicly displayed for everyone to immerse in. Through converting what the artist sees and hear into video and sound outputs, an interactive circuit is created together with the viewers in real-time, through the output-input nature as the gadget becomes an extension of the creator’s anatomy.

In both performances, it was interesting to see how there was a difference in the level of interactivity based off the audience’s responsiveness and reactions. The second performance was definitely more engaging as the audiences’ direct participation in the work itself made the overall artwork a lot more personal, and thus, memorable for those who were involved.

In my opinion, using Lee Kang-So’s Disappearance, Bar in the Gallery (1973) as a holding space for the interactive piece was a brilliant idea, as participants could freely decide what they wanted to do. This greatly altered the responses and make the input material a lot more unique such that if one were to visit the interactive performance on both days, they would be experiencing two different results.

Interestingly, the current Lee Kang-So’s Disappearance, Bar in the Gallery (1973) is a re-enactment of his first original exhibition back in 1973. In this piece, Lee seeks to subvert the sterile white environment of a gallery setting into the everyday bustling Asian life through transplanting a traditional Korean pub scene (Chumak) into a public space. With chairs and tables set up, the usually quiet walking space is transformed into a gathering place where participants can openly share a glass of makgeolli (Korean fermented rice wine) and converse freely. Bringing the original work and its time period into context, I found out that this was an powerful juxtaposition of the South Korean society during the 1970s where the country was submerged in political and economic unrest stemming from the martial law dictated by South Korea’s first president Syngman Rhee. During that time, there was a restriction on the freedom of speech, and Lee wanted to emphasise upon that by setting up a contradictory communal space that was created specially to encourage conversations. Personally, I feel that the impact of the set up was reduced as it has been taken out of its cultural context. Our local audience may not understand South Korea’s political history well enough to fully immerse in its content, which really took away from the overall experience. By re-adapting the set up to our local context, the bar could have been better re-contextualised and better understood through local perspectives. However, what I do appreciate about these 2 artworks together, is that the combination of both works truly creates another level of meaning as a whole, where the content of this work itself is completed through the audiences’ participation, engagement and experiences.