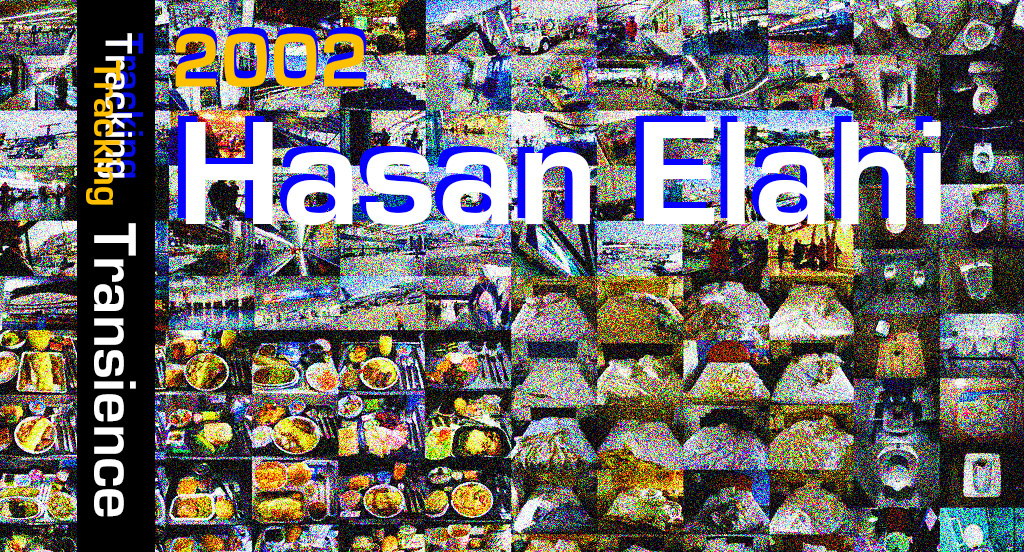 Art and technology has advanced to an age where it is a new intertwined notion. The use of technology has been embedded into our lives that it has become apart of our identity. Hasan Elahi views art and technology as a creative problem solving between the digital world and society. Tracking Transience, was more than an art project, it was a conceptual work that started from a mistaken identity of terrorist activities into a question of identity.

Hasan Elahi is a Bangladeshi-born American artist who plays with the concept of identity and privacy in the technological filled 21st century. He shows us how to use technology, which often overexposes our digital identity, in a way that ensures him more privacy. In 2002, Hasan Elahi was returning from one of his frequent trips abroad when he was detained in the airport. The FBI opened an investigation on him, which they pursued for the next six months. Instead of panicking or resisting, he decided to collaborate by starting Tracking Transience, which he calls “a project in self-surveillance.” He documents the locations and minute details of his day-to-day activities, such as the airports he’s been to, documentation of meals, hotel beds, toilets he has used, parking lots he has been to and so on. Elahi makes these compiled databases available to the public and the FBI through his website. Thus, giving the public visual and textual information about his whereabouts and doings. Moreover, there is an independent third party, his bank, which verifies his location and time where these point cross-reference through his purchases. These documentation creates a collage of himself exploring and interacting with the world. Elahi commented in an interview that a work that takes place online and the internet forms a conducive one-to-one interaction between the audience and the information given online.

Every photo taken in Tracking Transience 2.0 holds a sense of candidness, not staged nor organised into a peculiar manner. However, it is not ‘live’ enough as the artist could take the pictures anytime of any day and upload into the cloud whenever he feels like. This then invites the audience to question Elahi and if he is telling us the whole story or just what he wants us to see. In an interview, he stated that what he post may not be what it seems.

“As artists, we try to create experiences. The end result of Tracking Transience is the experience of going through the information and realising the reversal that’s taken place. By telling you everything, I’m really telling you nothing. I actually live a private and anonymous life and that you know very little about me. Telling you one part of my story.”

Through this project, Elahi brings a point where we have become a global society of surveillance. He has tapped into this phenomenon by giving up his data willingly and profusely on a daily basis by merging art, technology and his daily life. Giving excess information to everyone and sharing everything which devalues private information. In the contrary, he is also able to access the logs of who is viewing him on his website. So who is watching who? As Elahi commented in his TEDtalk, has watching unconsciously become apart of entertainment in our lives that may lead to a creation of a digital identity that might not be what it reflects? Elahi also questions that is the project still considered art if everyone such as the billion people out there did it. Living in the age of technology and social medias, creating your own individual archives has become the norm. Yet, to give someone information directly gives an individual a different persona in the third space. The use of social medias and online platforms, hypermedias, are also an extension tracker of our daily lives. It holds personal information that is beyond to what we want to display online. Each click, each link, each like tracks our online activity that it is ultimately stored in a cloud database. On the other hand, what we can control is how we shape our online personas and the reality to co-inhabit with new age technologies, using them to our advantage. This reflects the idea of cybernetic vision where not only it shapes modern science and technology but also bridge fields of knowledge in improving artificial control and communication. It can assist in the evolution of art through the use of computer and archive that holds the database in the cloud. This shares a growth concept from the dynabook.

An article by Wittkower, “A Reply to Facebook Critics,” brought up a point that one thing could mean thousands of different things or it could mean nothing to someone. Each of us see value in a variety of aspects. The norm in society just sets a standard where society could follow and share similarities with others in order to connect and feel ‘belongness’. Following on the psychology principle of socio-cultural, all human beings are social animals and has a need to belong. It may not necessarily apply to you as you could think otherwise. Living in a harsh and judgemental society whom may not be brave enough to voice out, this could lead to a creation of identity that may not be even true. Just as Elahi pointed out in Tracking Transience, everything that is out there is not what it may seem. Just like Facebook or Instagram, we post what we want to post to let others see and hide the things we do not want to show. We shape our profile in a certain way to be accepted in society. Or is it that the Facebook generation has shaped the way we are, what we want to share or hide, what we want our lives to look like in a profile page. Have we lost our true selves while creating a digital identity in a reflection of who we want to be but not necessarily who we are.

Overall, the evolution of new media history has derived vastly. It has become apart of our lives that gives us the access to manipulate different platforms in peer-to-peer communication. It has shaped the new age into an advancement where we have a choice to take it as an advantage to our society and arts.  With art and technology in hand, hypermedia improves mass engagement and creates opportunities for expression and interaction which allows the members of society, such as artists, activists and other political and cultural groups to disagree and challenge the dominant narratives set by norm. Till today, Tracking Transience 2.0 has been running and tracking the artist, Hasan Elahi without fully exposing his identity. Everything may not be what it seems, it is up to us to decide what to believe in and what to judge upon.

An Interview with Artist Hasan Elahi